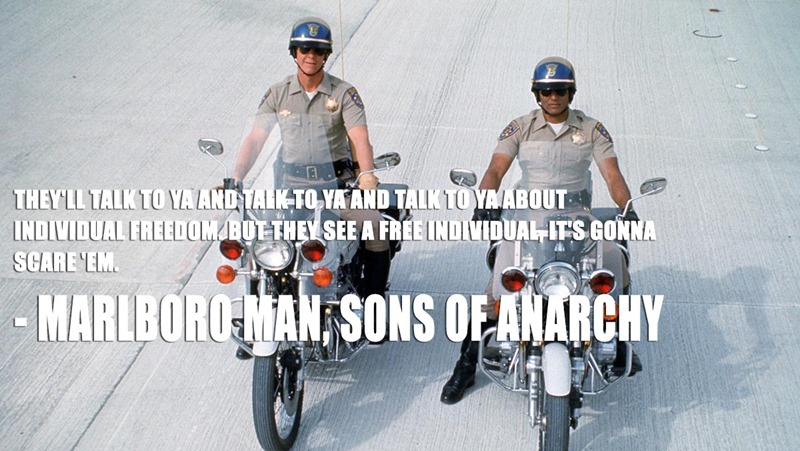 …But much like the drugs and alcohol in the show, it’s going mobile.

Yes, my mom’s favourite TV show is indeed spinning off into video game territory. Mobile video game territory that is. Here’s the first trailer for Sons Of Anarchy: The Prospect, which will have you earning your patch and catching bugs in your teeth as you regret not wearing a full-face helmet when you hit the road:

Described as a multi-part episodic game based on the adrenalized drama, Sons Of Anarchy: The Prospect will most likely do biker stuff that involves wishing you were in a car when the rain hits and praying to whatever god you worship that the pistol you have tucked in your pockets doesn’t go off when you hit a bumpy stretch of road.

Speaking a long time ago in the ancient age of 2012, show creator Kurt Sutter tweeted that he was looking to make a game that wasn’t “some slapcrap browser thing”. Hopefully, the end result won’t be some sort of slapcrap tablet game instead, although I’m not exactly hopeful. Still, when it comes to biker games the bar ain’t exactly high. After all, the last game set in the very specific genre of outlaw motorcycle riders was Ride To Hell: Retribution, a game so bad that I’d rather be caught playing Barbie Horse Adventures instead.

As for you Sons Of Anarchy fans, your show is over. Having recently wrapped with a seventh season worth of episodes, the ride has come to an end. But don;t worry guys, Doctor Who is still going strong. Start watching that already, dammit.