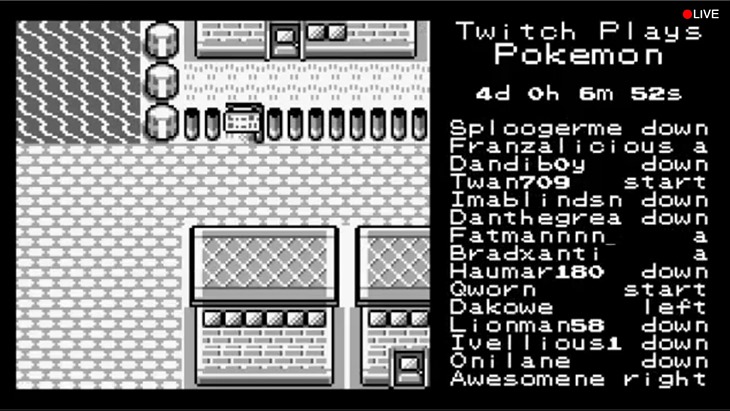 Do you remember Pokémon Red and Blue on the original Gameboy? Well now thanks to the wonders of Twitch streaming, you can play it along with 50,000 other people.

The way it works (or moreso how it truly doesn’t) is you input controls into the twitch chat, then the input is registered by the emulator on the stream. There are two major problems with this, one, there are thousands of people typing controls, and two, there is considerable input lag of about 20 seconds.

“TwitchPlaysPokemon is a social experiment, it is a stream of the Gameboy version of Pokémon Red (151 romhack) running on an emulator. An IRC bot translates buttons said in chat into keypresses (simulated in software, no fancy typist robots).”

The biggest problem is that people are jerks and constantly spam the start button to delay progress, and since there is no combinations or throttling of inputs, all the actual helpful moves may be lost fidgeting on the start menu. Despite that, in just four days of streaming, the collective chat has managed to win four badges and make considerable progress in the game. I don’t know whether I’m impressed or just infuriated watching it.

I will drop the link to the stream, but be prepared for the most dyslexic collective effort of humankind ever conceived. I would love to see this keep going until all 151 Pokémon are caught and the story is complete. I don’t think any of us would live to see the day.