Everything is connected… and they’re watching you. That was one of of the themes of Orwell’s 1984, and now 30 years after that iconic dystopian date, we have Watch Dogs, where Big Brother is an interconnected series of networks that runs a smart city. ctOS: The CenTral Operating System. Everything is connected. The power grid, transportation, profiles on every single inhabitant in the city. Everything. But who controls the system that controls Chicago. Who watches the watchmen, and what would happen if control of the system ended up in the wrong hands? 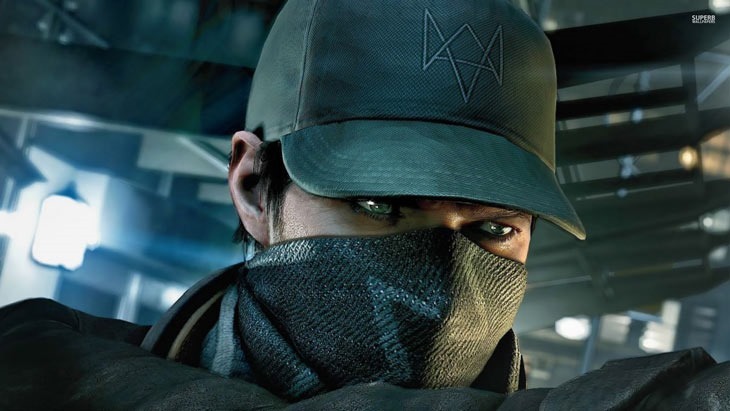 Watch Dogs puts you in control of Aiden Pearce, a hacker extraordinaire. He and his partner would hang out where the rich folk gathered and hack their bank accounts, digitally siphoning money from their overstuffed bank accounts as ones and zeros. In their last job at some stuffy hotel owned by one of Chicago’s benefactors it all goes awry.

When network security notices the hacking and starts tracing, Aiden’s partner pushes too hard, keeping the connections open for too long. They escape, but not without consequence. Soon their identities are known by the powers that be, and a bungled hit intended to help Aiden atone for his sins by way of showcasing his mortality sees his beloved niece Lana killed instead. It all sends Aiden spiralling down a path of overwhelming guilt. Fuelled by the spirit of vengeance, and with equal parts help and hindrance from legendary hacking group DedSec, he sets out to find Lena’s killer, and in the process make Chicago a better place.  It’s a proverbial rabbit hole. How far is Aiden willing to go for justice? 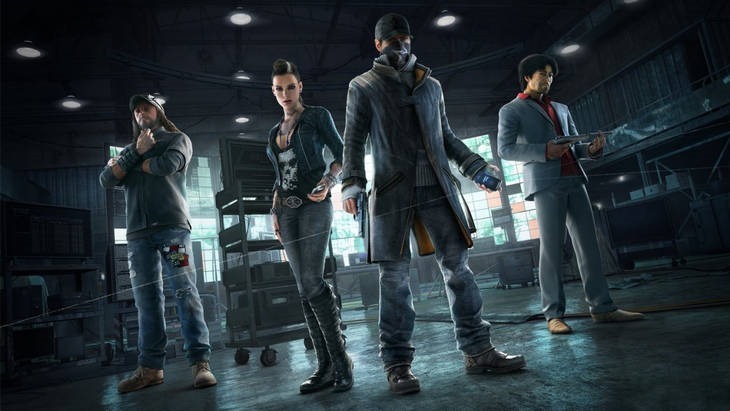 The narrative is as clichéd and worn as that description makes it sound, but it’s told well even if it is a little drab. Aiden – who has the personality of a dish towel – aside, there’s a cast of characters that make it a little more interesting. People like Clara, the punk-rock hacker chick; T-bone, a gruff red-neck techno-wizard and Iraq, a not-just-street-smart mastermind parading as a lowly thug peppering the narrative to make it more varied than it ought to be. Probably my favourite character – and not just because he’s Asian, is Jordi Chen, the fixer. Fixers are a sort of mercenary; assassins and mess cleaners for hire who specialise in making everything seem as though nothing was wrong in the first place. And, for a game focused on computers and hacking, it avoids the overwrought stereotype of the basement-dwelling know-it all, which makes a nice change.

What it doesn’t avoid is the rather cinema-perpetuated idea of what hacking is; the sort seen in films like the Matrix and yes, Hackers. Armed with his most important weapon, a cell-phone, Aiden is able to access and manipulate just about everything. Every NPC you encounter in the game, and even those you don’t, leave a digital footprint that can be read; you’ll use that phone to hack in to, pry apart and invade other people’s lives. And it’s fun. There’s a strange voyeuristic thrill from reading other people’s text, intercepting their calls and generally snooping about. Like all of private information, there’s an abundance of NPCs, all busy in the world doing their own things; going about their lives. And for a long time, it all seems like magic. For hours, you won’t encounter the same people having the same conversations or doing the same thing, but the longer you play, the more the cracks in the pretence start to show 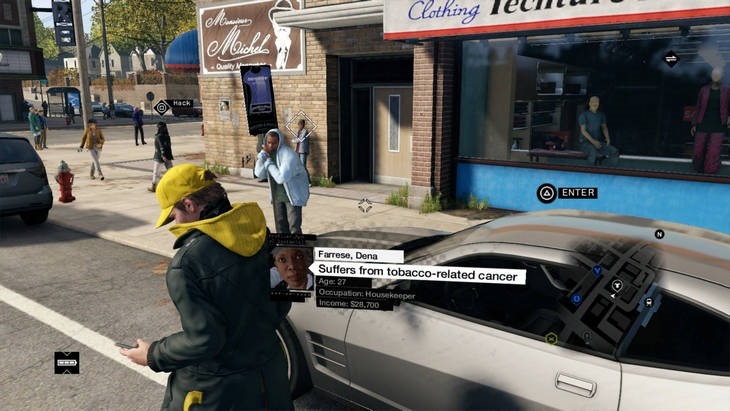 Until that does happen, the world seems very much alive. People you walk past on the streets will be arguing with each other, or having a heated conversation. Some might be playing augmented reality games on their own phones, or taking selfies.  Though it’s missing a few of the the finer details, the minutiae that make it as believable as the games by open-world experts Rockstar, it feels like a living, breathing city. Watch Dogs’ Chicago is a sprawling metropolis for you to dick about in and explore.

There are a few options for getting about that city. You’ll probably spend quite some time traversing the city on foot, as you’ll be profiling NPC to steal their cash as you do, but when you need to get around quickly the usual amenities you’d expect from an open-world game abound. There’s an L-Train metro for fast travel and boats littering the cities marinas. 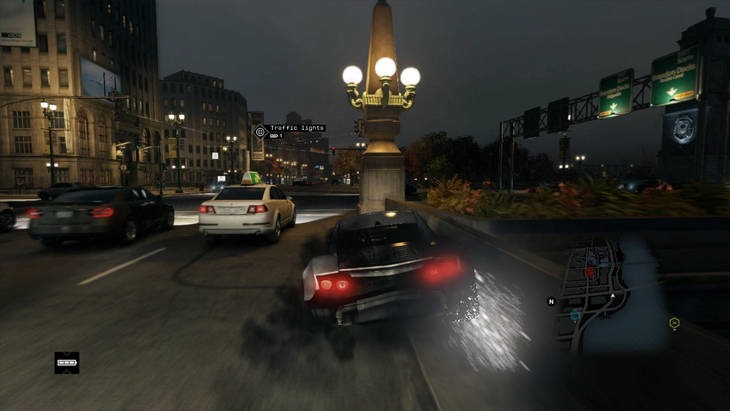 Cars and bikes are your preferred, easily-gotten playthings, and once you have the right hacking skills don’t even require broken windows or jiggered ignitions; they’ll open, ready to purr along at the touch of your mighty phone. The actual driving is not quite as good as it should be, handling much like an arcade racer; more Sleeping Dogs than GTA. That suits me just fine; as the world’s worst video game driver, I’m perfectly content to drive into and over everything than try and find the perfect race line as I’m trying to make my getaway.

Of course, getaways and chases are a little more interesting when hacking is involved. You can change traffic lights on the fly as you whizz past them, leaving a pile of cars in your wake. Or perhaps raise a bridge at the opportune moment, which you can ramp off of, leaving your pursuers eating dust. Chicago’s cops are relentless; a sniper-laden helicopter and an army of cop cars will plague you for committing offenses that go beyond simple misdemeanour and they’re nigh impossible to shake until you remember you’ve got the tech to keep them at bay. A simple tap on your phone and you’ve caused a temporary blackout, making your getaway just that much easier. It’s oddly empowering stuff, making you feel like a tech ninja, slipping away under cover of darkness. 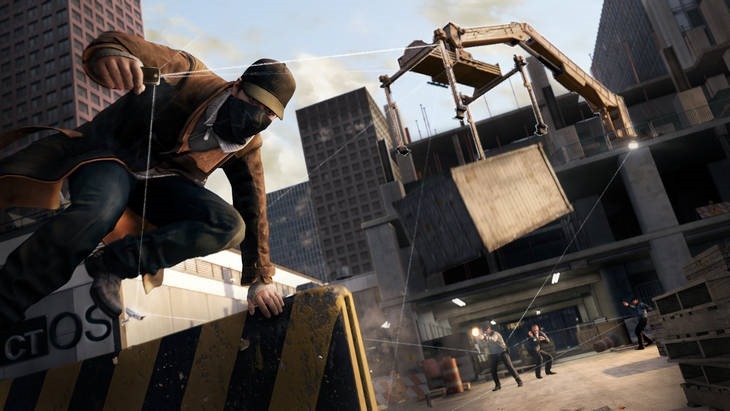 That pervasive hacking is pivotal to the game, and much of your time in missions will be spent hacking your way in and out of nasty situations. Many of them have you infiltrating guarded institutions, and from there the choice is in your hands. The fact that there are multiple ways to tackle scenarios is something I appreciated. If you want to go in guns blazing, you’re free to do just that – but I almost always opted for the stealthier approach, making it more of an open world Splinter Cell than a hack-centric GTA. Hack in to a camera on the outpost; bounce around from camera to camera, set off alarms to distract guards, and hack their comms – eventually finding a route to whatever security systems you’re sent to override.

Enemies exhibit passable AI. They’ll try to flank you, use cover and call in reinforcements – but you’ve got a hacker’s toolkit ready to unleash; gadgets you can use to distract enemies, making them easier targets. You’ve also got the ability to focus, to slow down time making headshots a cinch. Naturally, missions often devolve in to all-out gunfights anyway, but the choice of how to approach them is appreciated, and keeps everything from feeling too familiar. Completing missions and side quests will earn you skill points that you can then use to unlock game hacks, combat upgrades and driving skills. 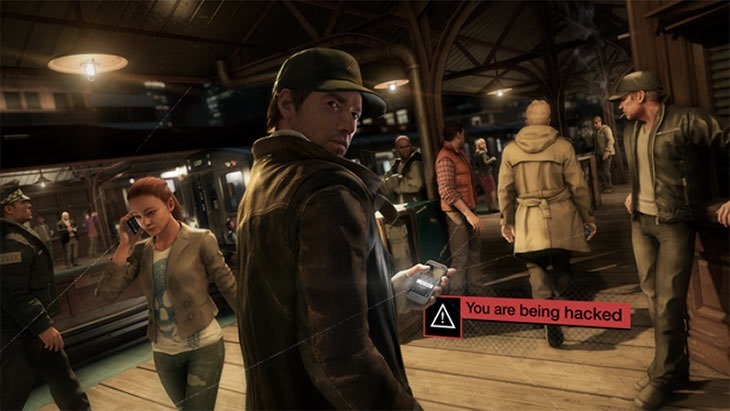 The much vaunted online multiplayer, where players from all over the world are able to invade your game works as advertised, and it fits in with the narrative so well that you’ll hardly mind the intrusion. Hack the wrong NPC – one who happens to work for the company that controls the ctOS – and you’ll hear them phone in and report your hack attacks. A contract, and bounty, will then be placed upon you, and live players will be the ones trying to take out those contracts. They’ll appear as NPCs in your game, but you’ll be alerted that somebody’s trying to hack you – so using your profiler, you’re tasked with finding them, and killing them before they manage to download all your data. They’ll naturally be trying to stay hidden from you, using their hacking skills. It has its own skill tree and progression, conferring bonuses if you build up enough notoriety. You can, should you choose, turn the feature off, but you’ll reset your online skills to zero by doing so.

Overall, it’s far more serious in general tone than most other open world games, and eschews the parody and broken, often overbearing satire of Grand Theft Auto. That doesn’t mean there’s no place for levity; you can hack a talking fish or moose head that adorns a wall and watch them come to life with a pithy saying or cornball joke, or a use your phone to spur a toy Rabbid to go “BWAAAAA!.” The digital trips within the game, the closest thing to an Assassin’s Creed connection, allow you to live out odd, simulated experiences. One of them, Madness, is a car game that has you driving in to flaming zombies for score; a sort of homage to Carmageddon. Another puts you in the driver’s seat of a gigantic, robotic arachnid tank, while another still has you bouncing from psychedelic flower to psychedelic flower. 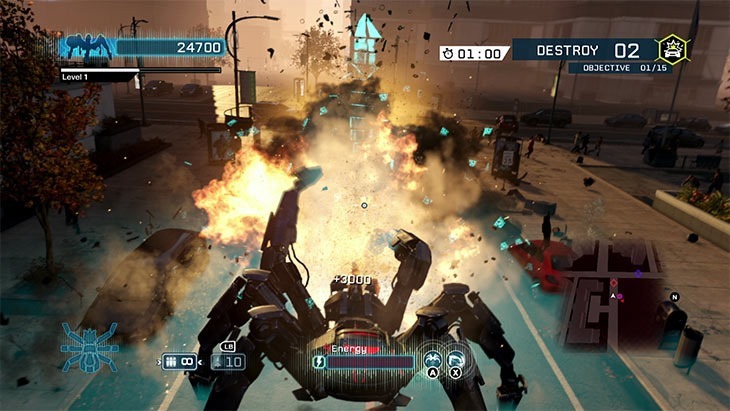 There’s almost always something to do; play a minigame, hack or be hacked in the excellently executed online multiplayer, partake in a game of chess or poker, check-in at any of the city’s hotspots using a 4square-like application or just cruise the streets hacking your way to a healthy bank balance; you’re never short of some sort of activity to keep you entertained.

There’s been furore over the “graphical downgrade” the game’s received since its original unveiling, and while there is truth to the claims, it’s still quite a remarkable game to look at, especially with regards to lighting and weather effects. When it’s raining, at night, with each drop pelting the ground and light glistening off of puddles on the ground, it’s spectacular. During the day it’s less so, looking not far removed from GTA V – and in some cases, most notably car models and general physics, even worse. 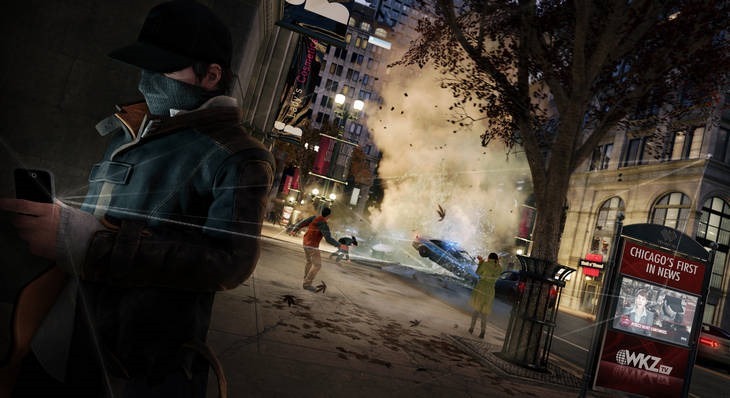 Watch Dogs won’t please everyone. Many will, I suspect, find it boring; a case of missions being a cycle of rinse and repeat. That’s the unfortunate, repetitive nature of open world games in general.  It will, unfortunately, crumble under the lofty expectations it has set for itself. It fails to set a new benchmark for modern, open world games – but given that it’s the studio’s freshman effort of the sort, we won’t hold that against them.

Watch Dogs is one of those rare games that I’ll return to, though I’ve seen the post-game credits – and is a worthy investment of your time – and more importantly, your money.

Watch Dogs was reviewed using a publisher-supplied copy of the game. Game played to completion on normal difficulty, with sufficient time spent in the multiplayer and the periphery. We have yet to play around with the ctOS mobile app, which allows you to meddle with your friends’ games as it was unavailable at the time of review – but it would have no bearing on scores.