When I first heard about WildStar, I was really rather skeptical. It seemed like a bad Borderlands rip off made into an MMO. The classes sounded similar, the aesthetic looked vaguely similar, and I was not in the mood for a game the seemed to be trying too hard. Well, I got beta access and decided to give the game a whirl. I’ve got to say, if I wore a hat I’d be eating it now – this game is nothing like I expected. 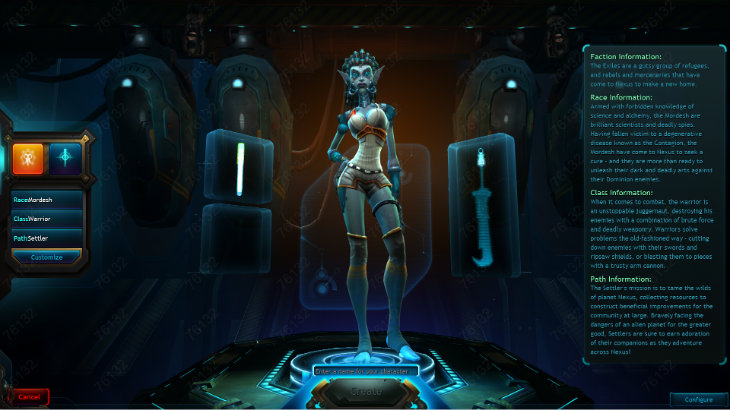 WildStar features eight playable races, four for each faction. If you want to play as the Exiles (similar to WoW’s Alliance) you can choose from Human, Aurin, Granok or Mordesh. If, however, you want to play as Dominion, your chooses are Cassian, Draken, Mechari or Chua. I played as a Mordesh and a Mechari, although I found the Class and Path choices had a greater impact on the game. Of course the racial aesthetics vary widely, the gameplay is obviously dependent on the other character choices. That said, I certainly enjoyed the look and feel of my characters – they were off-beat and alternative while still being relatable and fun.

I tried out two of the six character classes. While I enjoyed being a Stalker, the Engineer class was also strangely enjoyable as I built bots and ran around with guns. The majority of people seemed to choose the Warrior, Stalker or Engineer classes – Spellslingers, Espers and Medics were apparently underpowered. Of course, the game is still in beta and these sorts of balancing issues are one of the primary reasons for this testing period. 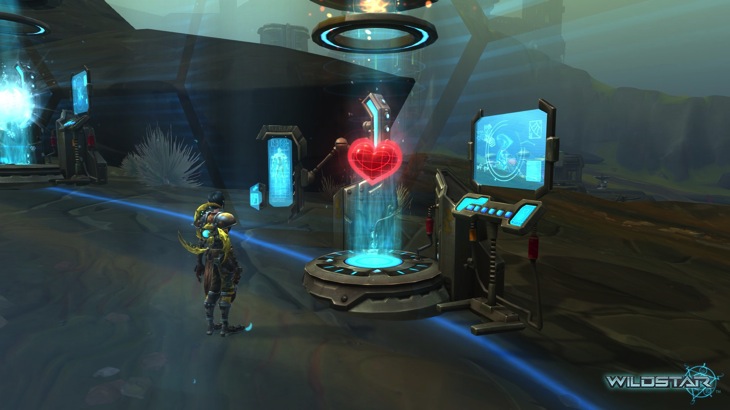 Not all races have the choice of all classes. Mechari are mechanical (as the name implies) and are unable to use magic. This means that they are unable to take on the Spellslinger or Esper class. Here, the racial choice does play a role in your gameplay, but only as a result of class choices. While some classes are better suited to combat and certainly need some rebalancing, there is the opportunity for players with any gameplay preference to find the class for them.

My favorite part of my characters came from the path system. WildStar uses four paths: Soldier, Explorer, Scientist and Settler. Each path will appeal to elements that specific players will enjoy as they interact with the world and their environment.

Explorers are all about exploration, obviously, and are given path missions to climb to the highest peak on a map, or achieve 100% map completion. They are able to find hidden areas and will appeal to those players who enjoy finding all the secrets on a map. Other secret finders are Scientists. This path focuses on lore and history of WildStar. Scientists can scan artifacts, program mining or science bots and even open doors to unique areas. As a result, if you decide to party up with other players, you’ll want to be sure to have an explorer or scientist in your group to find all that the world has to offer.

Meanwhile, soldiers also interact with key points on the map. Beacons appear for holdout missions where soldiers take on waves of extra or harder enemies. They can even get assassination missions. Finally, settlers focus on building the world around them. Settlers are able to build things in each town or out post with options ranging from buff stations to mail boxes and banks. In this way, settlers become an important part of the game’s economy, taking them beyond simple campfire builders. Some enemy areas even give settlers opportunities to build healing or EXP boosters. Can you tell I enjoyed playing as a settler? I felt so important when players would gather around, waiting for me to build a mailbox or a taxi station. 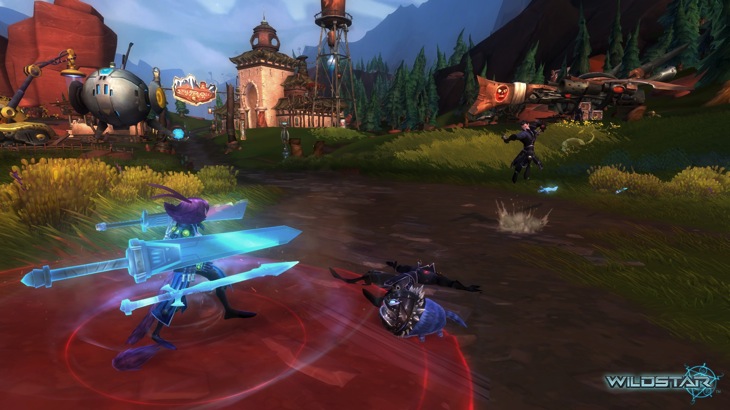 Most surprising to me, WildStar features a vast range and variety of missions. Each area has specific path activities, but you can also pick up story missions and side tasks. I tried to do it all, leading to a laundry list of tracked activities. However, it goes way deeper than “go here and kill rats” missions. Yes, there are killing tasks, but I was also using electrified paddles to shock enemies hiding in bushes, or disabling communication systems, or jumping through water spouts to reach hidden islands (even as a settler). Of course there is the common MMORPG aspect of going into enemy areas, killing off a bunch of henchmen and eventually a big boss, but the extra tasks and goofy cut scenes make the experience more entertaining and fulfilling. It’s not just a matter of completing tasks while you wait to ding.

Speaking of leveling up, the leveling system is rather cool. When you level up, the heavy metal level-up is hilarious, especially as the voice-over man will say such phrases as “you leveled up, have a cookie” or other such trolling statements. Each level opens a variety of new experiences – crafting, player housing, abilities, amplifying spheres and even an awesome hoverboard mount. That mount is far too much fun, looking like skater tricks as you traverse the environment. 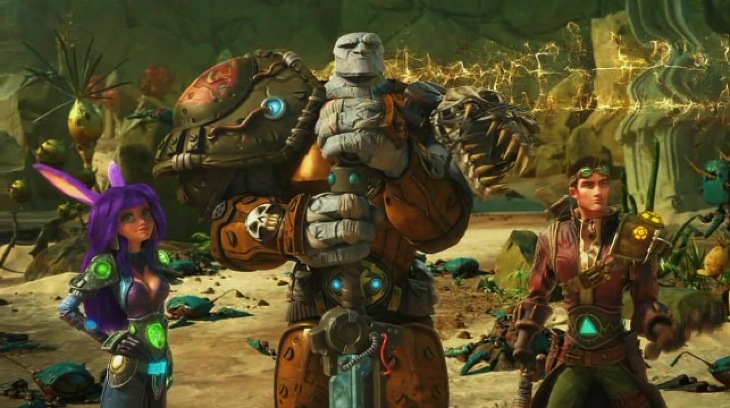 One of the biggest challenge for an MMO is to make the world feel massive and alive. Cities or towns need to feel bustling and real, with opportunities to explore and feel adventurous. Sure, other people are completing the same tasks, but you still want to feel special. The world needs to seem plausible, but still fun and exciting. WildStar gets it right on all accounts.

Each town, city and outpost is unique. It features a variety of races, characters and options. As a settler, I couldn’t build the same things in each place, giving meaning to traveling to different areas in order to find new things. Outposts were more than just quest-giving areas – there were unique trades to conduct, hobbies to engage in (like cooking), and new skills to learn. You don’t really even need to enter towns to take or return missions – this can be done using a call-in system. You can even get your loot for mission completion this way. I thought this was a nice touch to remove unnecessary to-and-fro when towns or outposts were no longer of interest to players.

The open world itself is full of life. More than just neutral and aggressive enemies, there are ambient creatures and environments, some of which can be used for crafting later in the game, others which are there purely to make the world seem real. The maps are varied with environments featuring all kinds of topographical instances. It’s not just about rolling hills or jagged peaks – there are water features and specific environments that change the player’s way of interacting with the world.

Additionally, as you traverse the world you can find area specific challenges. These can include killing specific enemies in a short amount of time, or interacting with the environment, finding hidden items. There isn’t a penalty for failing these challenges, and they are repeatable. Upon success, players play the odds for their rewards – they can double the odds of obtaining a preferred item, but it is still a matter of chance which loot they will actually receive. 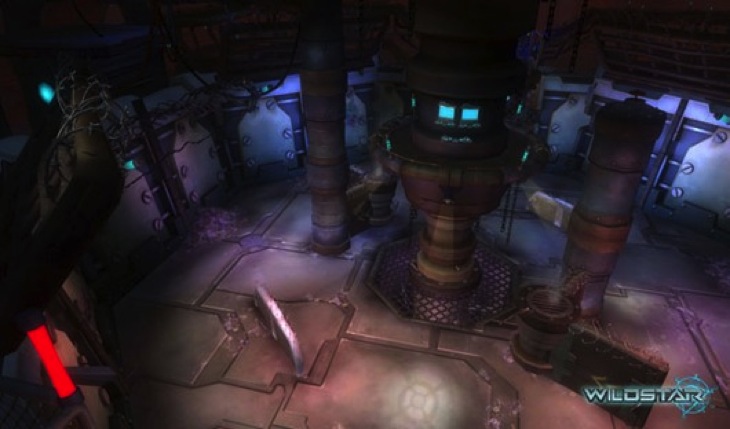 I don’t normally play PvP. I prefer PvE, and I don’t enjoy being ganked by seriously overpowered players. However, I did queue for a PvP event in order to see what it was about. The match I played was a strange capture the flag type arena battle, which was actually a load of fun. Unfortunately, engineers couldn’t use their bots and settlers couldn’t provide camp fire buffs. However, it wasn’t simply a death fest for me, despite being a relatively low level character. The matching system already seems well balanced and I was able to have fun blasting my abilities at fellow players, working with others to destroy our enemies. Plus, I captured the flag (it was a mask, actually) a few times, making me feel like I was contributing even though I died more than I care to confess. 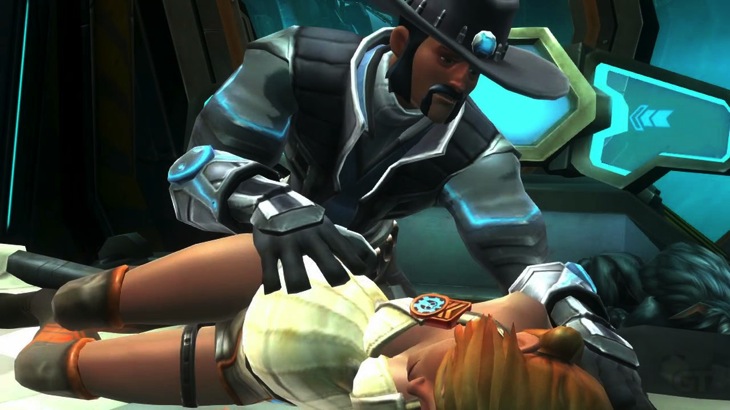 Should you play this MMO?

I’m not always the biggest MMORPG fan. They often seem to copy each other, the worlds are generally quiet dreary and I find the gameplay simply boring. However, WildStar seems to be a new breed. The pathing system ensures that players get more of the gameplay that they enjoy, the world is thriving and quirky with plenty of jokes hidden in enemy descriptions and mission objectives. It appears to be a self-aware MMORPG, making the player laugh at the ridiculous nature of these types of games, while still having a good time.

That truly is the crux of it – you will have a good time playing WildStar. It is fun, it is quirky and it can appeal to players of all types. I miss my character when the beta is closed during the week, and I look forward to weekend playtime so that I can build, kill, explore and just generally run around being silly.

Having played WoW (many years ago), and recently playing FFXIV and TESO, I must say that WildStar was the most fun. Sure, Wow had a ton of content, and FFXIV felt gloriously Final Fantasy, but WildStar feels like a giant romp that just keeps getting better and better. Even dying offers a witty and funny moment in the game. If you can even enjoy dying, what more is there to say?

If you’re a fan of MMORPGs, or even just a fan of giant RPGs, you will need to give WildStar a chance. It has everything you’re looking for in a fun-filled and quirky package.