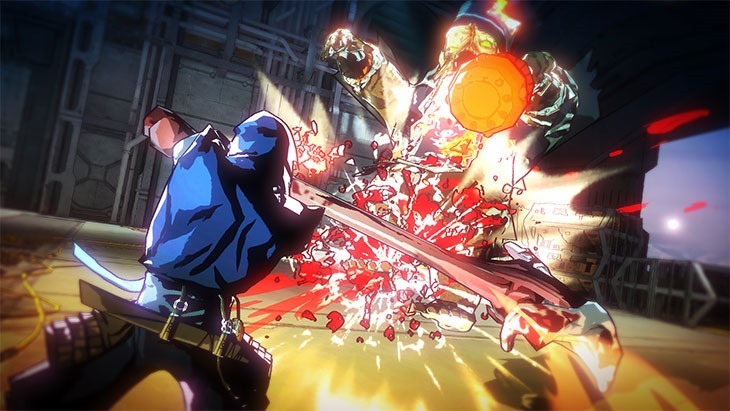 The last Ninja Gaiden game, the third in the rebooted series, wasn’t very good – though it was made a little better when the game was re-released on the Wii U. It was the first one to be made without Itagaki’s involvement, and it shows. Team Ninja really seems to have lost its spark. for that reason alone, I was pretty excited when it was revealed that the next Ninja Gaiden game, a spinoff, would be made by somebody else.

That game is Yaiba: Ninja Gaiden Z – and it’s being co-developed by Western studio Spark Unlimited, Team Ninja and Keiji Inafune’s Comcept. Yes, the guy who co-designed Mega Man and produced many of the Blue Bomber’s games.

It’s focused on a cyborg ninja, Yaiba, who’s trying to eke out a plot of revenge against series mainstay Ryu Hayabusa – all while trying to rid the world of a nasty zombie infection. so yes, he’s really the bad guy. It’s presented in a rad cell-shaded manner, and is mental. It’s got off-the-wall humour, insane action and looks like one of this year’s most downright fun games.

“In Yaiba: Ninja Gaiden Z, players will battle fierce zombies as Yaiba, a cyborg ninja who will do anything to get revenge and stay alive. Cleaved in two, he is brought back to life with cyber-technology. Brandishing his ninja sword and the mecha weapons in his cyber arm, he slaughters zombies with brutal, over-the-top abandon.

Step into a stylized living comic book where stunning graphics depict a world gone mad. Hordes of undead can only be stopped by Yaiba’s willingness to use any means necessary to get the job done. Will he kill by turning his cyber arm into a razor chainsaw for slicing up undead—or just rip off an opponent’s arms to use as zombie nunchucks? Both possibilities fill Yaiba’s heart with twisted laughter in this upcoming collaboration between famed developers Team NINJA and comcept’s Keiji Inafune.”

It’s coming to PC, PS3 and Xbox 360 in March this year. If you love Japanese-styled action games with an irreverent bent, this could end up being one of your favourite games. I played a very limited bit of the game when it was in alpha, and it help up pretty well then. With two years of development and polish I have no doubt it’ll be immensely satisfying fun. It can’t be any worse than Ninja Gaiden 3, anyway.