Home Lifestyle IT BURNS! We tried the Carolina Reaper Madness One Chip Challenge because we’re idiots 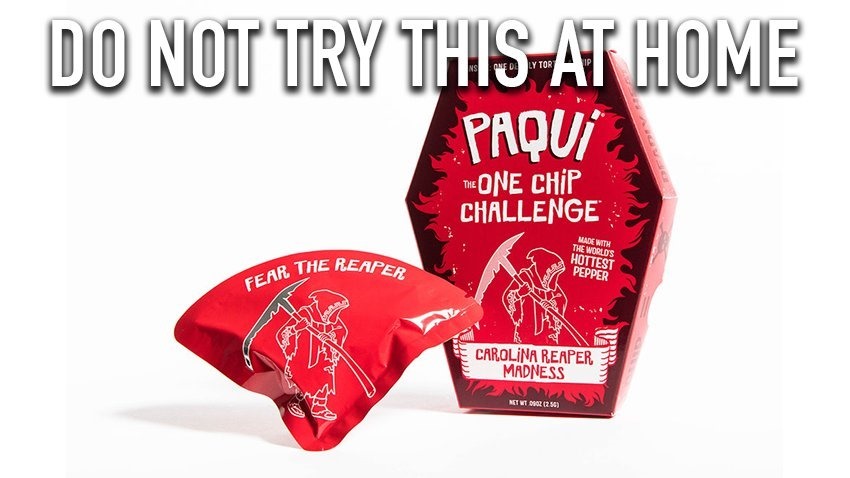 Here at Critical Hit, we’re big fans of spicy food. Many of us are chilliheads, eating the spiciest food we can in the quest for that escalating endorphin rush. There’s something magical about the right sort of burn – the way that overloads your senses with equal amounts of pain and pleasure.

We’re also complete idiots. Put the two together, and you have the One chip challenge, which uses the world’s hottest pepper – the Carolina Reaper – to spice up a single tortilla chip. It’s hot. Really, really hot – coming in on the Scoville scale at somewhere between 1.5 and 2.2 million units. For the sake of reference, a fiery habanero measures in between 350,000–570,000 units.

Gavin managed to get a bunch of them from the US (thanks Zoe!), so of course we had to try them. The challenge? One dastardly hot chip, followed by not drinking anything for 5 minutes after eating em. And now you can watch us in pain. Stick through the video, because the initial challenge is followed up by another featuring Tracy and Noelle. Enjoy!

From my perspective, the thing was less hot than I expected it to be. That doesn’t mean it wasn’t hot though – it really felt like an inextinguishable fire in my mouth. It burns. That was fine. I can handle the mouth pain. It was the gut-wrenching stomach pain I experienced hours later that made me regret everything. Even the morning after went better than expected…for me, anyway.

At least one of the idiots who tried the challenge threw up afterwards, while another (sup ‘Nikola) had digestive issues and pain weeks later.

I do not recommend this shit at all.