Home Lifestyle Two idiots butcher the sanctity of a Gatsby 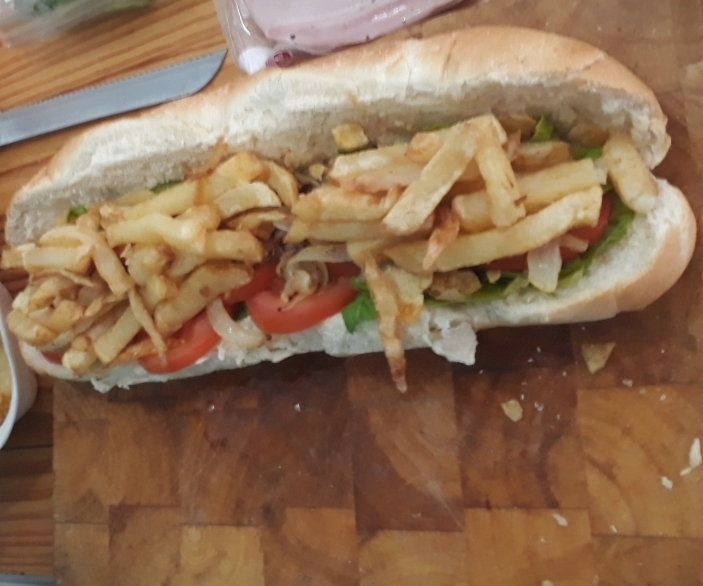 If any of you know Kervyn you’ll know that he loves a good Gatsby. I am not sure where the dish originates from, but I suspect its origins probably lie within the history of the Cape Flats where many a Coloured person lives in South Africa. I tried one about eight years ago and have had no inclination to try one again. I found it stodgy, overly packed with fillings that fell out, and drowned in tomato sauce that ended up covering my shirt (Trevor’s note: Sounds perfect).

Then Trevor had this bright idea that we make our own, and I was in! I thought ‘I’ll make a nice Gatsby, with kale, beetroot chips and parmesan-infused oil (Trevor’s note: *long-suffering sigh*).

Trevor had other ideas though. He also refused to agree with me that a Gatsby is the same as the British chip butty, only with other crap thrown in; well, we put our differences aside (Trevor’s note: not really) and made our own. He schooled me in the fine art of constructing something that would probably block an artery and cause all manner of other internal injuries. (Trevor’s note: you can thank me for the fact that this monstrosity even has chips in it. Proper slaptjips. Not crisps, Nick! It was a very close thing.)

This is our story…

Destiny 2’s official cookbook launches next month. Sure, why not?

The recipes included in the book are inspired by the game’s characters, locations and lore…