Assassin’s Creed Origins changed things. By leaning into the series’ natural progression towards becoming an unabashed RPG instead of just an action game, Origins was a far more immersive and engaging experience. While Origins detailed the creation of the franchise’s Brotherhood of Assassins in Ptolemaic Egypt, Odyssey is set four hundred years before its foundation. It means that there’s no mention of Templars or Assassins, and you’ll not see any hidden blades or missing fingers to accommodate them. That doesn’t mean a lack of Assassin’s Creed lore; instead you’ll get a closer look at the First Civilisation; the Ones Who Came Before. 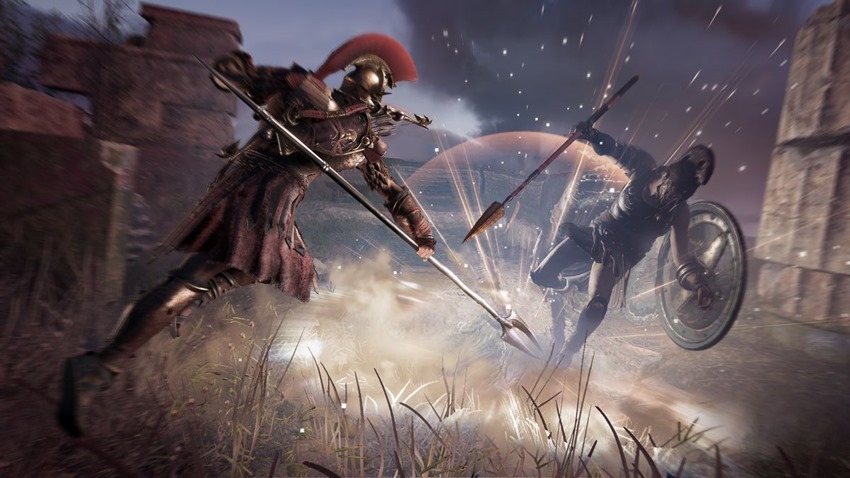 Taking Origin’s roleplaying trappings and expanding on them, you’re now given the choice to choose your hero. You’ll play as either Alexios or Kassandra, siblings and descendants of Spartan King Leonidas. There doesn’t seem to be too much difference between their stories, with the game effectively just switching characters around based on your choice. While that choice seems at odds with Assassin’s Creed’s modern-day lore, it’s explained away by there being two strands of DNA on the recovered tip of Leonidas spear to unravel through the Animus, the technology that lets people relive the past. Exiled as a child, with a family torn asunder thanks to cruel Spartan doctrine, your hero grows up as a street thug, a street-savvy mercenary – or misthios – who exchanges usually morally questionable favours for coin. Disputes and arguments are usually settled with the pointed tip of Leonidas’ spear; a relic of the past and your heroes only connection to a family lost.

The Peloponnesian war rages on, and your mercenary is hired to sway the war effort. One assignment sees your hero become entangled with the Cult of Kosmos, a secret organisation of masked members who use their shadowy influence to manipulate and control Greece’s politics in their favour. Their conspiratorial plans naturally involve your hero’s famous bloodline and the access to ancient artefacts that it confers, which leads to very literal odyssey across the cradle of Western civilisation, into the forgotten nooks and crannies of ancient Greece. Because it’s Assassin’s Creed, you’ll engage and interface with famous characters from the period, including famed historian Herodotus, philosopher Sokrates, the father of modern medicine Hippokrates and an eclectic range of figures who’ve left their mark on history. 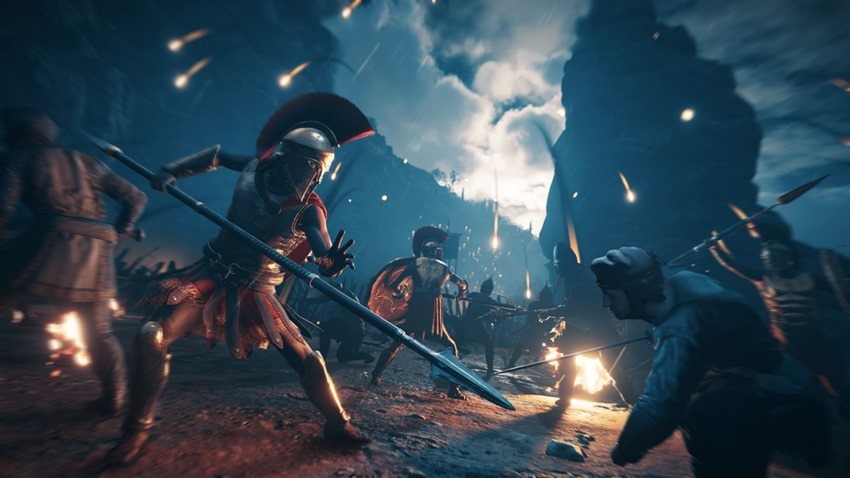 There isn’t just one principal quest either. Odyssey has a multi-pronged narrative that has you tackling your tragic familial history, unravelling the mysteries of the First Civilisation and its ties to your lineage and also taking down the cult by picking off the members of its many branches to discover who’s at the head of it all. You’ll conquer the Aegean islands, slay mythical beasts and get to the heart of a conspiracy. While there are elements of vengeance to your hero’s tale, it’s not wholly defined by a quest for revenge which is a nice departure from…just about everything else. the game didnt lean into mythology as much as I expected, but where it did, it led to some of the best boss battles the series has seen.

Because it was developed in tandem with Origins, many of that games core mechanics are in place. The combat is nearly identical, with your hero able to equip a range of different weapons – bows, staves, swords, daggers etc al – with varying level requirements. Combat is engaging stuff; without shields available to the player, dodging and parrying become essential. There’s a brutal ballet in the on-the-ground fighting; switching between weapons on the fly, quick-shot arrows and unleashing special abilities earned through a skill tree. Those skills are now organised into three distinct branches; Hunter, Warrior and Assassin. These are both passive and active, mappable skills that have the power directly proportional to the gear you’re equipped with. I will never grow tired of Sparta-kicking enemies to their death off of cliffsides. Of course, if you prefer the sneaky approach that element is still there. Though the Brotherhood doesn’t exist, it doesn’t mean you can’t still skulk in the bushes, waiting for an opportune moment to drive the blade of Leonidas’ spear through a skull. 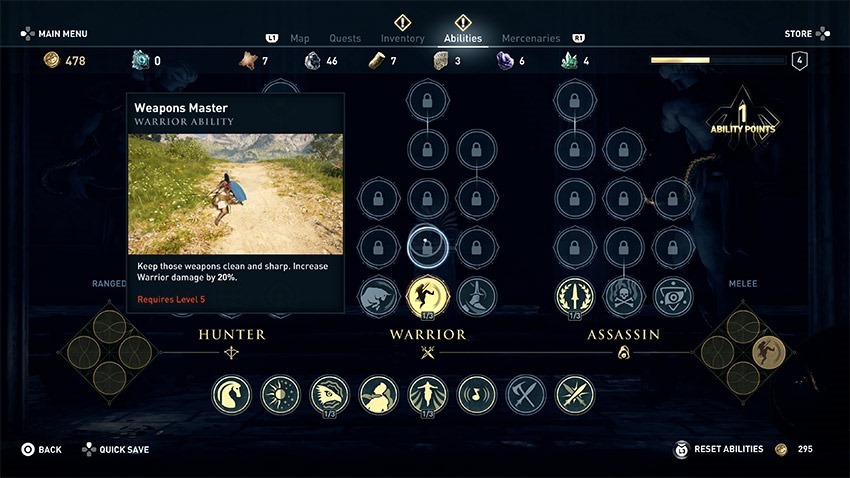 The forts, bandit and military camps from Origins return too, and you’ll spend an inordinate amount of time trying to infiltrate them, remove their leaders and torch their supplies. Here though, it feels like it matters. Almost everything you do influences the war between the Athenians and the Spartans. By completing quests, taking down forts and killing leaders you can sway the war efforts in each region towards either side, culminating in a large-scale regional battle to determine whose control an area falls under. You’ll also find quest items and clues in chests – so while there’s a certain rinse-and-repeat, formulaic nature to many quests it feels more dynamic than it did in Origins.

And of course, what would an odyssey be without a ship? Here we see Black Flag’s naval transport and battles return, though the time period means you’re using archers and javelins over cannonballs. It also, mercifully, means none of that long-range mortar combat against forts from aboard your vessel. Your ship, as with your equipment, can be upgraded and also staffed with lieutenants who confer perks and buffs to your ship. Instead of just killing everybody, the non-lethal approach lets you recruit new crew members. 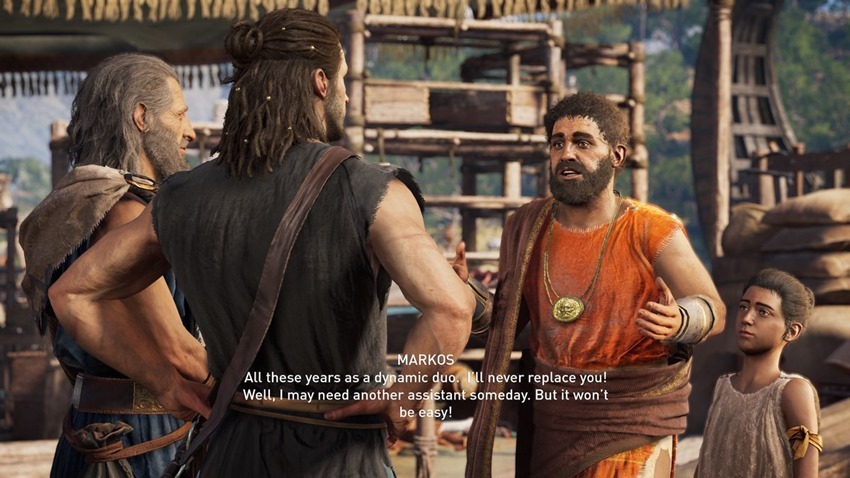 The choice of character isn’t Odyssey’s only shift towards roleplaying. You’re now able to choose dialogue options and actions, some of which seem to have far-reaching effects. One early, entirely skippable quest has consequences that carry through the rest of the game, and it’s entirely possible to kill off main characters, affecting the end game. By employing a silver tongue, you’re able to completely avoid fights. The choices you make are often morally ambiguous. Altruism might not be your best course of action, while some instances where it seems a sharp blade is the best solution isn’t. there are even unrelated quests that tie into each other. In one mission, I was on my way to take out a cultist. Along the way, I started a side quest to help a merchant find his horse. It turned out that he needed that horse to deliver a flammable oil to the very same cultist – which helped me make his death particularly incendiary. This sort of thing happens often; there’s a dynamism to quests, where everything is intricately weaved together.

Your hero now also has romance options. Certain dialogue choices open potential trysts and casual sea-side frolicking up. While I didn’t experience anything remotely resembling meaningful in my romancing, I did manage a few flirtatious encounters that led to proverbial rolling in the hay. More entertaining though were the moments that I completely and obliviously ruined my chances with suitors. Art imitating life, I guess. I spent a fair bit of time when playing wondering how Odyssey was structurally different from games like The Witcher 3 and Dragon Age and why those are labelled as RPGs. And honestly? They’re not. Assassin’s Creed is now an RPG, and it’s better for it. 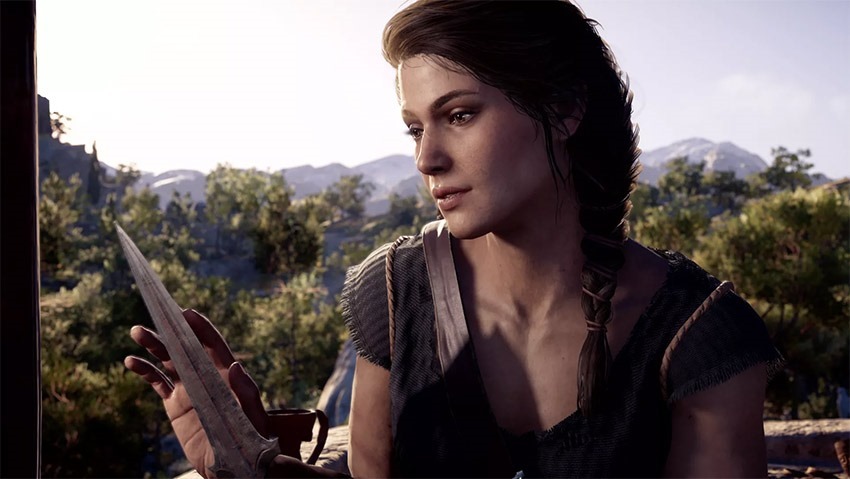 The most welcome change though is the new, recommended exploration mode. Instead of markers showing you where you need to go, you’re now given clues to locations that you need to find for yourself. A quest-giver might say that you’ll need to speak to somebody at a tavern, you’ll have to pry information on where that tavern might be or do a related quest to get that information. If it happens to be located in the south of Attika, you’ll have to make your way there without guidance to find the information, items or people you’re looking for. Sometimes the clues are blindingly obvious, but the system makes for an incredibly immersive experience – even if all it effectively does is pad out the game’s run-time. Not that it needs that, mind you. I spent over 50 hours rushing through the main story, and I could easily spend 50 more finishing up loose ends. It’s a simple but meaningful change, and I enjoyed the lack of hand-holding. It is optional though, and if you prefer the traditional guided experience you can toggle it on and off at will. Exploration mode and the focus on clues carries through to the cultists. You’ll have to find clues to their identities in the game world before identifying and assassinating them. You might find a scroll in a mine in Korinthia that’ll help you uncover a cultists identity. Kill them and you’ll receive one of a handful of clues that’ll help identify another. Killing all of the members of a branch of the cult will lead you to its leader, and you’ll have to kill off the branch leaders to find the ultimate puppet master.

While it’s similar to Origins in structure, the changes and additions are welcome ones. By going backwards in time beyond the foundation of the Brotherhood, Odyssey has been able to shrug off much of the series’ baggage to deliver an incredible Grecian RPG that even newcomers can enjoy. There’s still enough here for lore adherents, through digital journals and documents, but there’s very little fore-knowledge required. The modern-day stuff is still here, but its been whittled down to the bare minimum. All incoming players need to know is that there’s a machine called the Animus that lets users access genetic memories. Usually, those memories let players experience the wonders of an incredible historic setting in an engaging game. On that front, Odyssey more than just delivers; it’s probably my favourite Assassin’s Creed game.