For months I’ve had the unwieldy PlayStation VR headset stuffed in my cupboard gathering dust. It’s not that there’s been a lack of stuff to play, rather just that what has been available lately has been middling. That changed recently with Firewall: Zero Hour, a first-person shooter that capitalised on the immersion and presence of VR to deliver an exhilarating multiplayer tactical shooter. It’s not a game for everyone though, especially those who don’t like playing with others. For the, there’s Astro Bot: Rescue Mission from Sony’s own Japan Studio. It’s a delightfully charming platformer that’ll be instantly familiar to PSVR owners who played through the small selection of experiences in Playroom when the system was first released. Starring the very same diminutive robots from that apps Robot Rescue game, Astro Bot expands on the novel and interesting ideas presented in that demo to deliver one of the year’s best VR games. And it does so in a way that’ll leave an indelible smile, and the feeling that you’ve just experienced magic.

Like the best platformers, there’s very little in the way of narrative, because it’s not necessary. Here, a very definitely bad alien has destroyed the little Astro Bot’s ship and scattered he hundreds his robot friends and parts of the ship across the galaxy. It’s up to you – a little heroic robot, with a cape flapping in the breeze – to rescue your pals and gather the bits of your broken ship. As is platformer staple, you’ll do that across a variety of themed worlds. Each of the game’s 25 or so levels contain eight hidden bots, who you’ll have to find. Often out in the open, they’re sometimes quite tricky to find, with only their guiding please of “help me!” to pinpoint their location. Astro Bot isn’t gifted with the widest array of abilities. He can punch things, charge up that attack to spin around, and jump. When he does jump, he can hover for a short while, with little lasers coming out of his feet that are good for more than just dealing damage; they’re nice little markers for position within a 3D space. 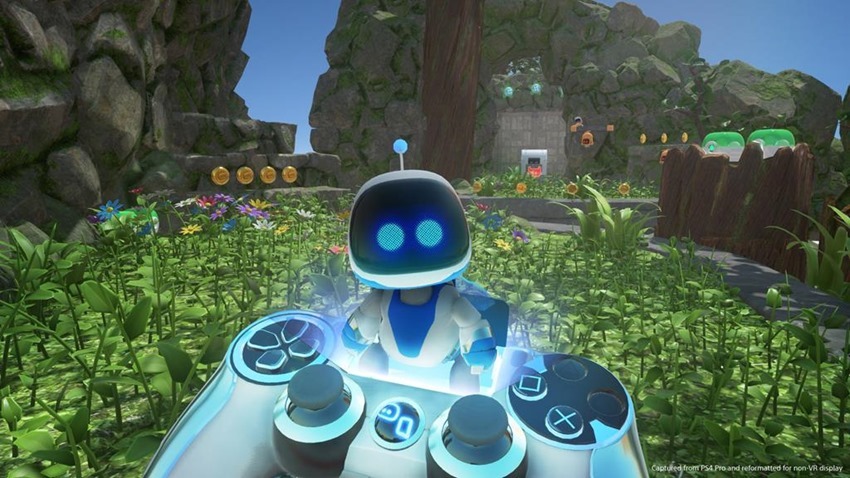 While that sounds like almost any other third-person 3D platformer, the difference here is your own part in the experience. There’s a buzzword with VR that inevitably gets thrown around, and I’m not going to break the mould. There’s a wonderful sense of presence here. You’ll not just see Astrobot in front of you, lie an inactive spectator. Instead, you’re a robot yourself; bigger than Astro Bot and not quite as nimble, you’ll still help the pint-sized robot in his quest. As in another VR favourite, Moss, you’re able to interact with the world. You’ll control Astrobot with the controller as you traditionally would but use your own presence in the world to headbutt soccer balls, bash planks of wood to find hidden areas. The Dualshock, always visible in the game as it rests in your hands, is sometimes augmented in-game. Placing it into a groove in a chest unlocks a gadget that makes your controller more functional. There’s a grappling hook, that lets you hook onto plugs in the world. Keep the cable between you and the plug taught, and Astro Bot can walk along like a tight-trope. Swing upwards and Astro Bot is flung into the air, allowing access to platform that he might not have been able to reach. Other gadgets let you shoot streams of water or throw shurikens. They’re ingenious, and mercifully, used sparingly enough so they feel like treats when you do get to use them. 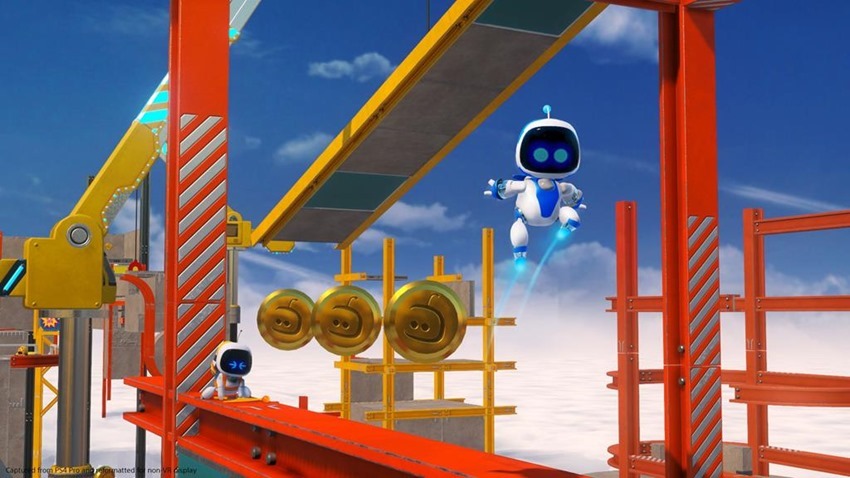 3D platformers really shine in VR, because instead of there being a fixed camera, you become the camera. That’s used to genius effect here, as you’ll have to look behind and over things to find the hidden robots. With almost every stage I started instinctively looking behind me because the developers seemed to delight in hiding things behind you. You have to look not just ahead of you, but behind, above and below. Level design here is tight and engaging and often frightfully clever. The themed worlds are visual delights too. It’s an amazing-looking game – and I don’t mean that in the disparaging way that we usually say a VR game looks good. It doesn’t look good for VR, it just looks good. That’s largely down to art design more than any technical prowess, but everything looks spiffing, whether it’s a verdant forest, an underwater playground or cave filled with towering, luminescent fungi. 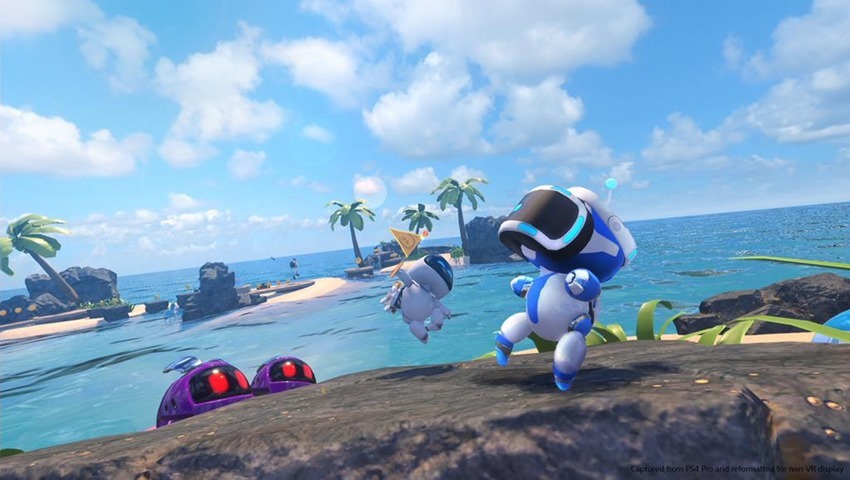 The game’s not especially challenging, especially if you’re not trying to find every single bot or the hidden chameleons that unlock extra challenge levels. There is some bit of challenge in the game’s inventive boss battles though, and every one of them is a delight to play, whether it’s a gorilla whose teeth you’re yanking out, a fiery Octopus you’re hurling giant boulders at, or a leather0-clad spider whose web you’re sawing down, they’re all the sort of boss fights you’d expect in Nintendo’s games.