I fondly remember playing co-op action shooters with my brother as a kid. Of course he’d always blame me when he died, but that’s besides the point – Crimsonland reminds me of all those old-school arcade shooters and it’s filled with plenty of remastered gore.

Using classic top-down shooting style, you start each quest with a simple pistol. However, as you kill the crazy monsters chasing you, you get random drops including nuclear bombs, rocket launches and Ion rifles. In essence it’s a simple retro game – kill all the things before they kill you. However, there are a few extras to keep players interested. 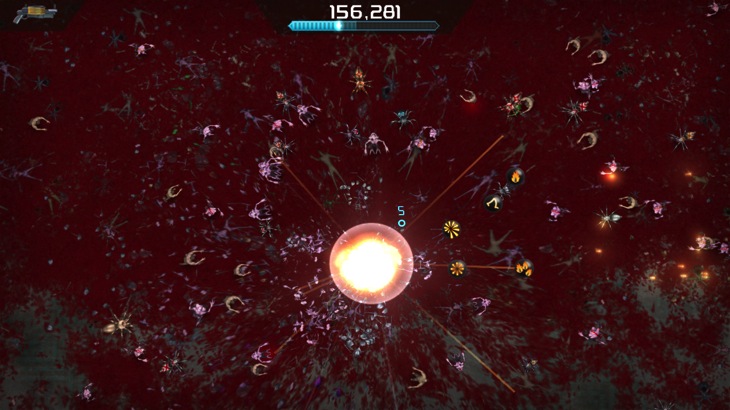 As you progress through the quests, you can unlock new perks, achievements, weapons and game modes. Perks work sort of like RPG-lite; you get new perks that improve your character’s resistances, weapon abilities and other things to help you survive to get the highest scores possible. In quest mode you have no control over these; however, during Survival mode you can select from a random choice of four perks to improve your survivability and continue through the game.

The guns vary greatly and are perfect for a variety of play styles. Considering my ridiculously poor aim, I tended towards the rocket launcher, shotgun or ion rifle – I love a gun that bounces off enemies and lets me kill more of them with a single shot. Other players might prefer the mini rail gun (also a favorite of mine) or submachine gun – there’s even a flame thrower. With 30 weapons to unlock and all of them appearing as random drops, there’s plenty of variation in gameplay.

Other randomly appearing things include buffs and special attacks. Some freeze all your enemies for a short while, others send out tons of fiery bullets to kill everything on the screen. Of course, as these are dropped by fallen enemies, you will often have to shoot your way through a mob of killers to get these power ups, adding to the risk vs reward calculation. The best part of the game for me was the co-op. The PS4 version allows up to four players to jump into the game and pew pew to their heart’s content. It’s fast and fun with a camera that simply zooms out slightly so that all players are visible the whole time – no split screen or confusion. Your DualShock 4 (DS4) also lights up the color of your character on the screen, helping players to keep track of where and who they are. It was strangely rewarding killing a ton of creeps while playing couch co-op; it took me back to the awesome retro vibes of playing similar games on the older consoles or arcade boxes. While single player is perfectly fine, the game has a lot more longevity when played with friends. Besides, there were just some levels that I couldn’t get past without a helping hand/gun.

Aside from the gameplay, the rest of the game is rather unremarkable. The aesthetics are all extremely retro, although rendered in perfect form on the PS4 – no matter the number of creeps or particles the game never lags or jutters. With simple controls along the lines of a dual-stick shooter (call it dual-stick plus trigger) you might be inclined to compare it to similar titles on the PS4. However, this one is solidly grounded in its old-school roots and doesn’t offer the audio or visual glory as you find in games on PS4 such as Resogun. While it makes an excellent party game, I’m not sure that I see Crimsonland having much longevity beyond that. It will definitely come out from time to time when I want to coordinate with friends or family to kill all the things, but it’s not particularly memorable as more than a retro action shooter brought back to life on PS4. Crimsonland is already available on Steam, and it launches today on PSN for a price as yet to be confirmed but presumably similar to Steam’s $14.