Pokémon is undoubtedly a series that needs no introduction. It’s a cultural phenomenon that was a huge part of many people’s lives growing up and even continues to resonate with kids and adults alike to this very day. It’s no surprise then that we’ve seen so many takes and variations of it over the years that any alteration seems to fit within the realm of possibility. Even something as outlandish as a Pokémon crossover with Nobunaga’s Ambition still kind of makes sense. So when I first heard about a detective adventure game starring the series’ mascot Pikachu, I didn’t think much of it It wasn’t until I heard a middle-aged man’s voice come out of the yellow fur ball’s mouth that for the first time, I tilted my head in confusion at the series. But as time went on, I grew to love middle-aged Pikachu, and by the end of the game, he became one of my favourite characters in the Pokémon universe. 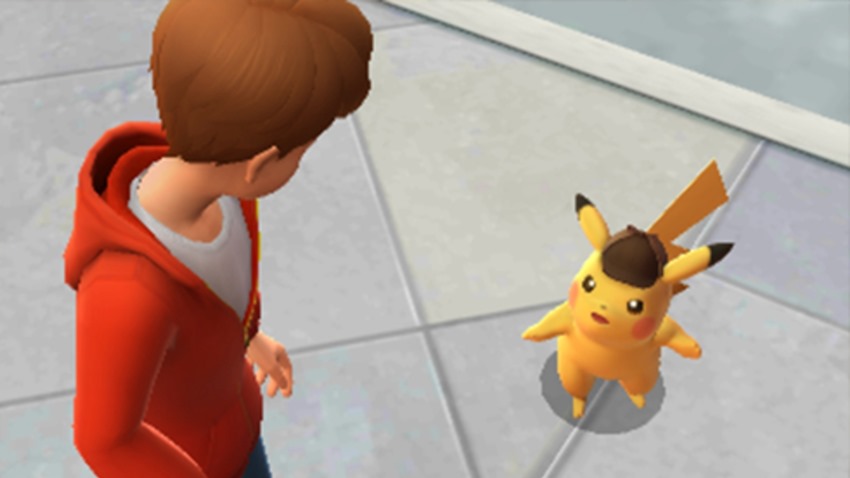 The game follows the crime-solving adventures of Detective Pikachu and a boy named Tim. Tim is trying to find his missing father, but during his journey, he comes across a rather peculiar Pikachu. This Pokémon can talk, is a detective and even weirder, only Tim can understand him. The two are mysteriously connected as Pikachu was once Tim’s dad’s partner. So they team up to find the missing father, uncover the reason for the recent erratic behavioural change of the local Pokémon as well as find out what exactly happened to Pikachu. 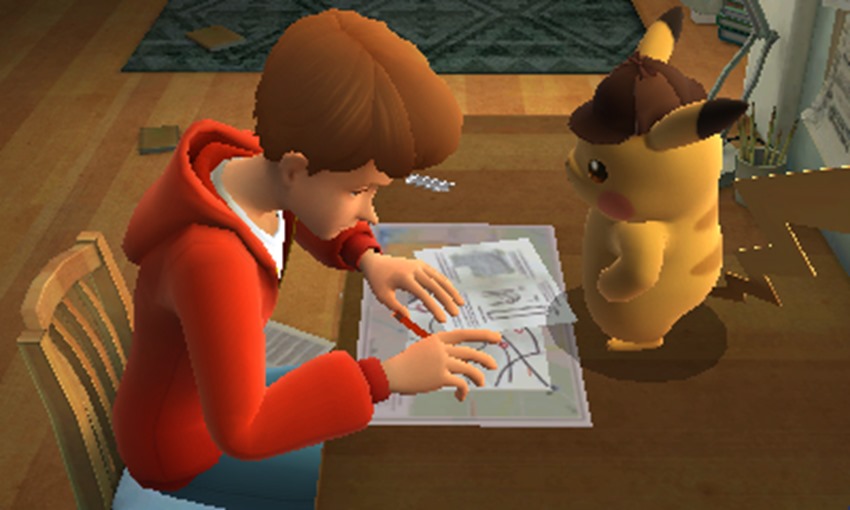 The story is probably the game’s biggest strength. It’s not that it’s a particularly intriguing plot, but its world is so fleshed out and its characters so full of personality that you can’t help but get sucked in. At the centre of it all is the charismatic Pikachu. The deep voice and deerstalker hat give off a kind of hardboiled vibe, but he’s more of a loveable goofball than anything else, and he acts as the glue which holds the narrative together. If only that glue were strong enough to keep the rest of game together.

The problem is that I would much rather watch Detective Pikachu, than play it. For a crime-solving adventure game, it’s not very exciting or suspenseful. I get that it’s aimed at a much younger and casual audience, but the gameplay loop can get monotonous and tiring. It follows the usual pattern for this type of adventure game. Run around looking for clues in the environment and talk to people and in this case, Pokémon, to uncover more of the current case you’re working on. Once you have enough evidence and testimonies, the game tasks you with piecing everything together in a relaxed puzzle-like activity. There’s no real penalty for not solving the puzzle correctly though, so it never really feels like you’re doing actual detective work. These types of games are at its best when you’ve gathered all the information and items you can and have to use everything at your disposal to solve the mystery. Danganronpa has the exhilarating Class Trials while Ace Attorney will throw you into Courtroom battles. I understand that comparing these games might be unfair as they’re for different demographics, but Detective Pikachu’s gameplay is bland, and the detective work you do throughout doesn’t amount to much. 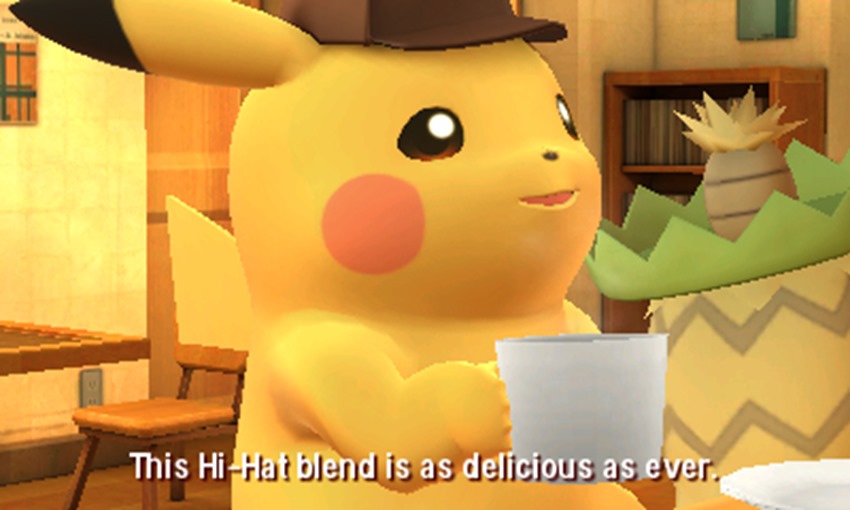 Thankfully, Pikachu himself adds quite a bit of humour and fun to the activities. Often spouting humorous jokes or hilariously trying to recreate the crime scene. The merriment does alleviate some of the monotony of repeating the same actions over and over again, and even then you’re forced to listen to Pikachu constantly explain things every step of the way. Worse, is there’s no way to skip the dialogue, even though it’s pretty obvious what’s happening around you. I can understand the handholding but it just slows the pacing to a crawl which left me pretty uninterested a lot of the time. I enjoyed the interactions and characters more than the actual gameplay. 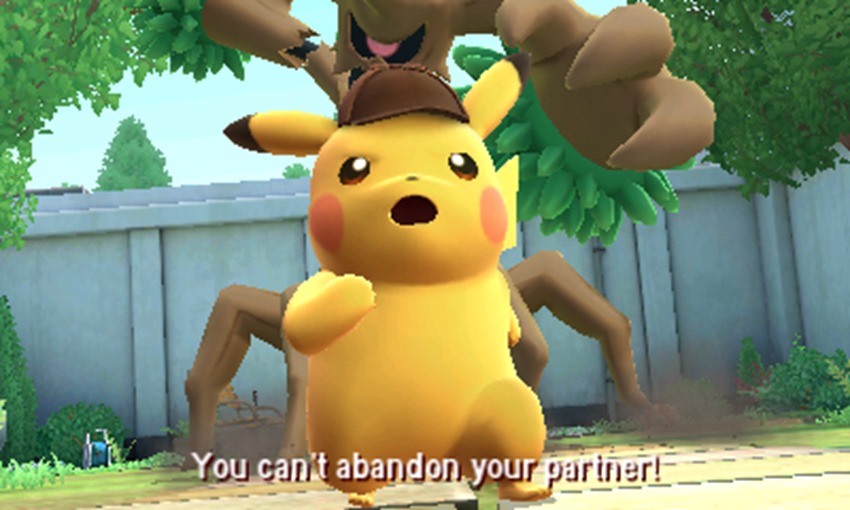 On the upside, the game looks outstanding. It’s thematically consistent with the Pokémon universe, and the characters especially are well animated. While the voice acting is pretty serviceable for the most part, Kaiji Tang completely knocks it out of the park as Pikachu. While it’s no Danny DeVito, he flawlessly transforms the loveable mascot into a semi hardboiled, coffee-loving detective and is a huge reason why I fell in love with this character. 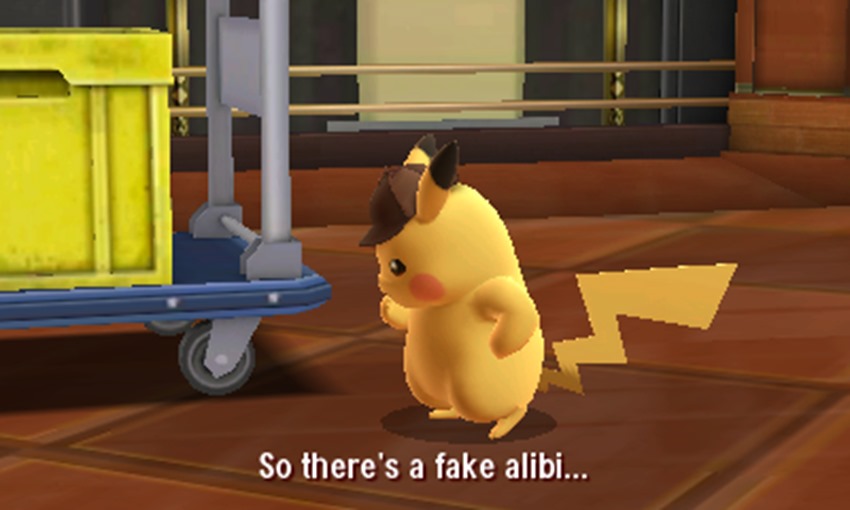 Detective Pikachu left me feeling conflicted by the game’s end. On the one hand, this version of Pikachu became one of my favourite characters in the Pokémon universe, and I thoroughly enjoyed the story. On the other, however, I was pretty bored with most of the gameplay sections. I wanted to love the game in its entirety, but unfortunately, it’s just not fun to play. There’s a lot of potential here though, and I do hope they improve upon the gameplay more because Detective Pikachu, as a character, is quite extraordinary.