When it first launched, Disney Infinity was the first real rival to Activision’s Skylander franchise in the toys to life market.Combining a simple single-player mode with a comprehensive toybox mode, the game wasn’t perfect but the foundation was solid. This year sees the Marvel universe of heroes and villains invade that toybox, bringing amazing, avenging and galactic guardians to the mix. And it’s a move that has resulted in a far better game. 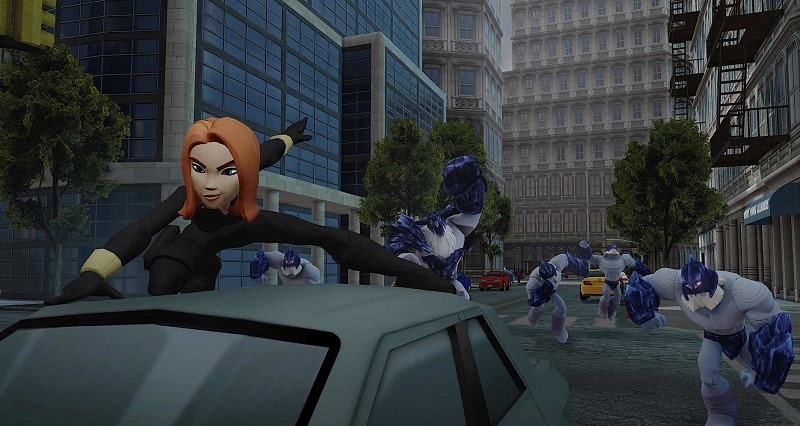 Much like last year, there’s a lot of Disney Infinity to play with this year. There core Marvel experience consists of 16 new heroes in the initial launch wave, with more on the way that will be accompanied by a trio of villains. Disney itself is also present, with Infinity figures from Brave, Maleficent and Big Hero 6 also jetting into town soon. For the purpose of this review however, we’re sticking to the Avengers starter pack and those figures, with Spider-Man and the Guardians Of The Galaxy being saved for a later playset review. 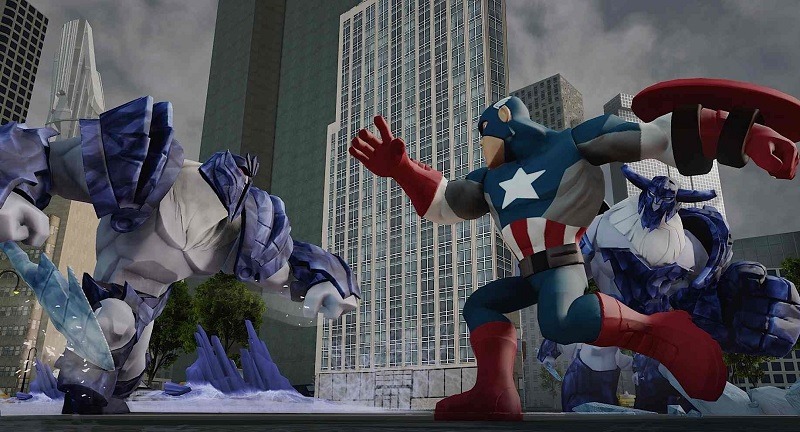 And that’s where you start this year, if this is your first dip into Infinity. A starter set gets you the Infinity portal, some power discs and three heroes: The Invincible Iron Man, the mighty Thor and the adjectiveless Black Widow. They come with the playset piece that is needed to access their side of New York, as well as two power discs which unlock two new game modes that can kickstart your collection. Returning fans might find this selection to be on a meagre side, as Disney Infinity 1.0 included three distinct playsets with a character for each one in that starter pack. That being said however, the Avengers playset does at least feel far more lively and massive than any of those first edition worlds which were explored. 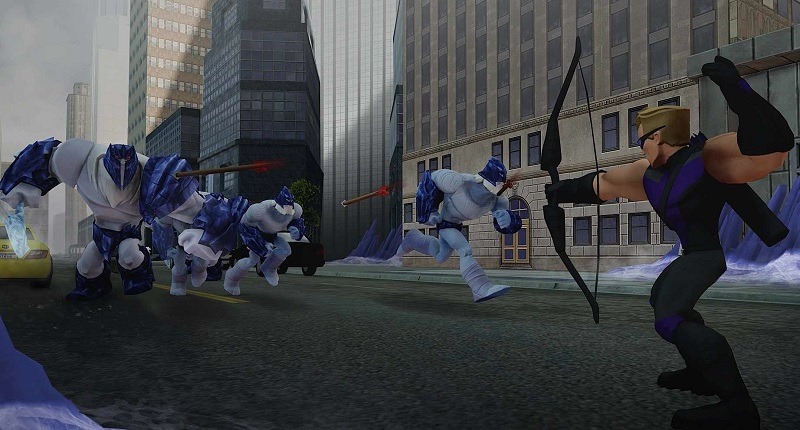 On the physical side of things, the figures look great. They may be inaction figures, but the paint job looks fantastic and the poses chosen for the characters manage to capture their personalities perfectly. The Avengers playset has the most members to collect of any Disney playset on offer. If you want to assemble the full team, you’re going to need to also invest in Hawkeye, Captain America and the Incredible Hulk. As well as a seventh member later this year, when the Falcon flies into town. 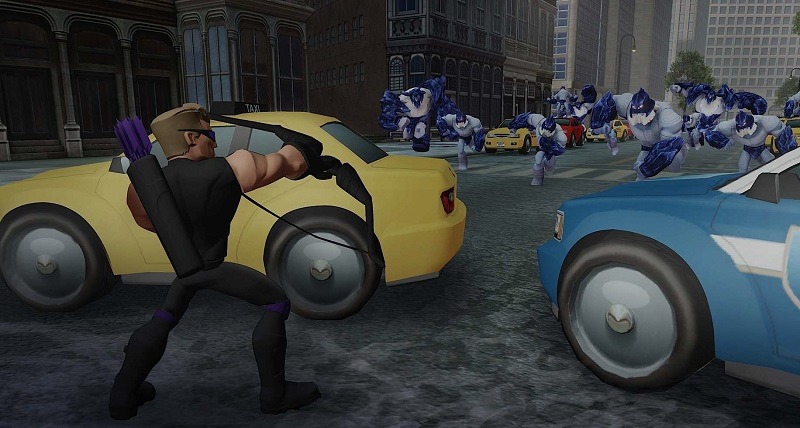 Each character however, does have a distinct feel to their playstyle. Iron Man can fly around and fire repulsor blasts before engaging in hand to hand combat, Captain America can super-soldier his way through any crowd, Black Widow is supremely sneaky, Thor packs both a ranged and melee punch, Hawkeye has plenty of trick arrows up his sleeve and the Hulk is a raging meat tank of gamma radiation destruction.

Which brings into view the biggest update from Disney 1.0 to the 2.0 edition. Combat is far more meaningful this year, with a skill tree system that allows you to level your characters up in far more meaningful ways. Combat was a weak point in Disney Infinity 1.0, coming off as generic and uninspired. This year however, a simple combo with the Hulk can be leveled up into a massive damage-dealing attack while also teaching him to climb walls, jump higher and rampage through targets. Flying is now also a much bigger deal, with several characters able to traverse through the game with ease. 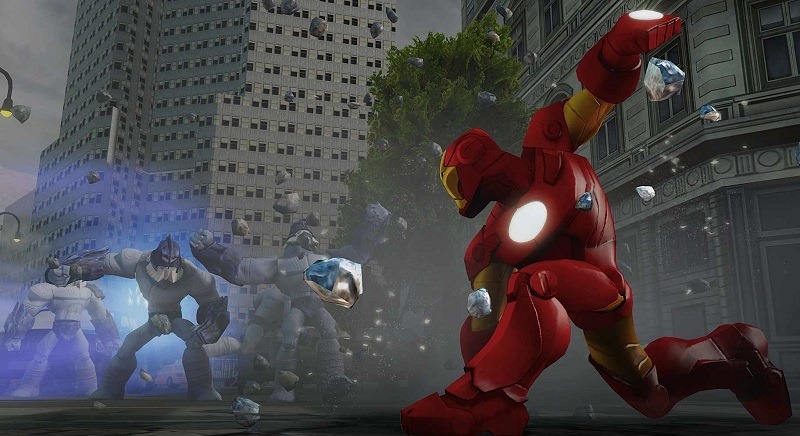 There’s a certain joy to launching away as Iron Man, banking hard and landing in the middle of a Frost Giant rampage with a perfect three-point pose that deals damage. The controls are solid, the movement feels natural and it remains fun. Taking a sky-cycle for your heroes who don’t have those abilities however, feels rather clunky in execution however, and some work could have been done here to keep that aspect of the game more balanced for all the figures.

Characters also have other exclusive abilities, such as Hawkeye peppering the field with a barrage of explosive arrows or Captain America spinning his shield around him in a effortless display of crowd control. This update now also extends to the original infinity cast and crew, who are all rocking their own skill tree and unique abilities, thus giving the toys that life that they were lacking in the first game. Switching between characters now feels more inspired, as exchanging the quick feet of the Black Widow for the unrelenting strength of the Hulk in big encounters makes a world of difference. 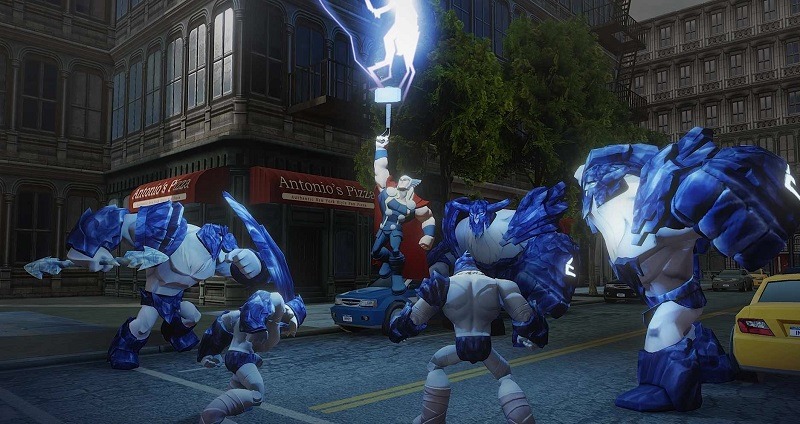 As for the single-player, there’s a story here of sorts that is briefly touched upon, as Loki and MODOK plot to dip New York into an eternal winter that will leave the city ripe for a Frost Giant invasion. It’s a shame that the game doesn’t make more use of the superb voice cast from the Avengers Assemble cartoon to tell a better cinematic tale, with details being fleshed out in-game with a quick bit of exposition here and there. If there’s one thing that the Marvel movies and cartoons excel at, it’s telling a story, something that is barely seen in 2.0 as most missions set you the task of smashing something or someone. Then again, these brief CGI snippets might be perfect for the young ones that it’s aimed at.

Once you’re done defeating Loki and his horde of Frost Giants, players can embark on one of two new game modes that come with the starter pack. Escape From The Kyln is a Diablo-esque romp through that intergalactic prison that has players outfitting a little sidekick to help them along, while Assault on Asgard plays with the tower defence genre and creates a DOTA game with a Marvel flavour. They’re nowhere near as cinematic as the core single-player experience, but they remain fun nonetheless.

I am Iron Man 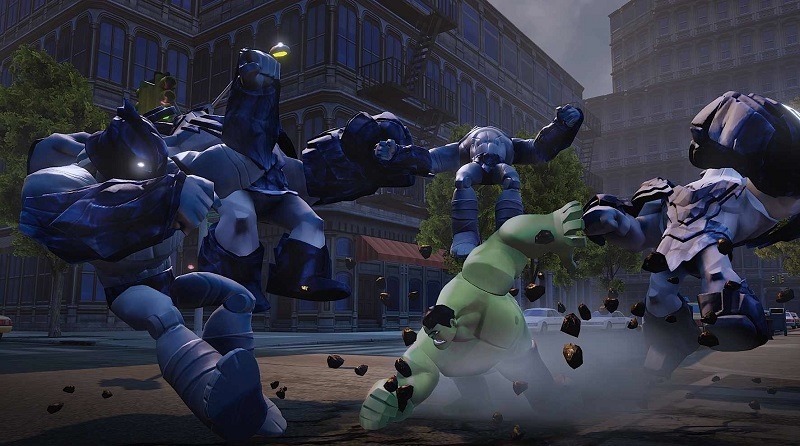 Power discs are also getting retooled this year, with the latest series offering distinct boosts. You can outfit your characters in new costumes such as Captain America’s World War 2 uniform or Iron Man’s Mark 42 armour, as well as fight side by side with a team-up power disc that introduces characters such as the Winter Soldier to the mix. A third type of power disc also gives players powerful items such as the Infinity Gauntlet, which can eliminate any onscreen menace that has an axe to grind with you.

It’s the Toybox however, that has received the biggest upgrade this year. Whether you want to race a friend, create a contest of champions or just tool around, the Toybox is now a far more inviting experience. You can jump straight in with one of 76 premade game templates, or task the game with randomly generating a world for you that you can dissect and tinker with. Returning fans will notice that there’s also a wider selection of terrain and background options, as well as a brand new menu system. It is undoubtedly, the biggest improvement thus far in the series. 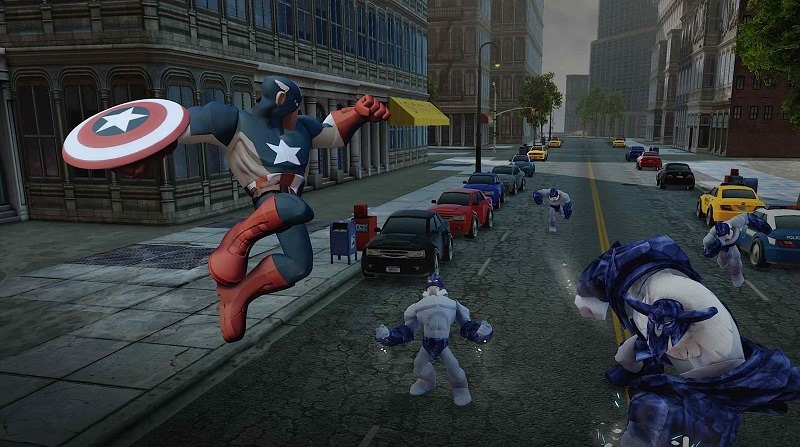 If you’re looking to create something on a smaller scale as well, the new INteriors will allow you to craft your own hangout, filled with various decorations collected from comic book history. These Interiors can also be linked to larger exteriors, creating adventures on a wider scale for anyone who becomes a patron of your Toybox.

Thankfully, with all these new additions being a bit overwhelming, there’s a new tutorial level available that will get you in the swing of things in no time. Buying goods for your toybox is now also far more simpler, as players no longer have to rely on an egregious roulette wheel system that was tied to character progression, but can buy what they need instead with the in-game currency. 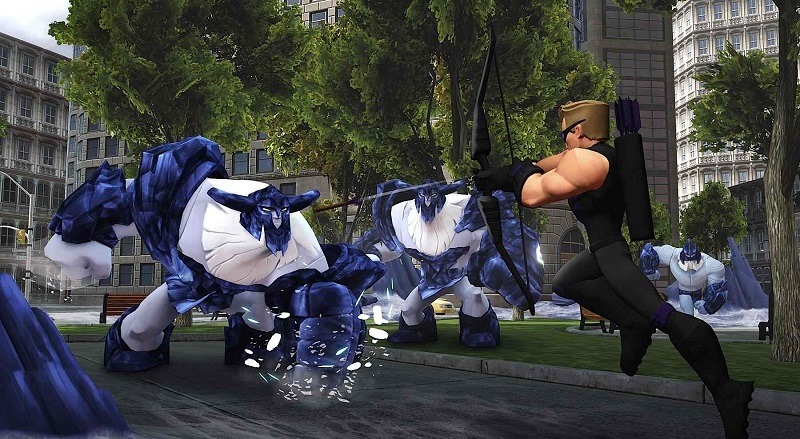 So how does the 2.0 edition of Disney Infinity stack up to the 1.0 edition then? Well for starters, despite the fun mini-games included, the current starter pack feels smaller than the initial offering from last year. New York may be the biggest playset yet, but the missions themselves can quickly become tedious thanks to the fact that there are only around seven different types of enemies to engage with. As of last year, Disney had detailed five playsets to collect and buy. This year, we’re only on three so far.

With the visuals, there’s not exactly much to set the new-generation entries apart from the older generation. The visuals have that little bit more polish but it won’t grab you immediately, with the grunt of the horsepower being reserved for more immersive toyboxes instead. What the game does excel at however, is the sound design. There’s a satisfying crack of tarmac when the Hulk lands on a Frost Giant, or a distinctive clang of hammer and shield when Captain America and Thor enter the fray, making the game audio reverberate with quality. 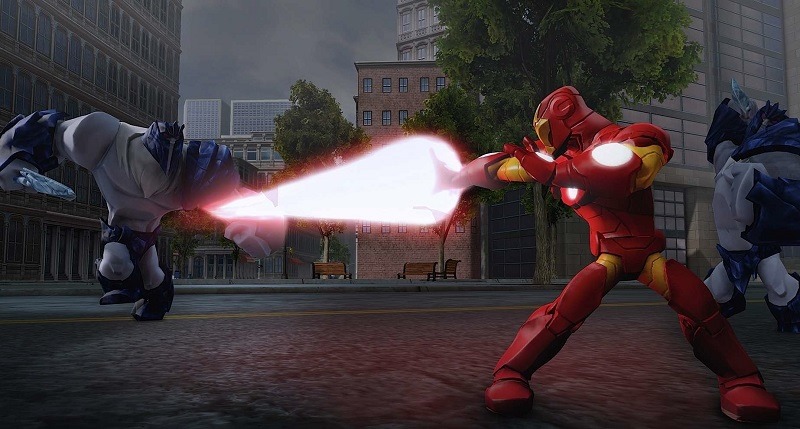 Any criticisms of the game however, are most likely moot. Disney Infinity 2.0 is designed to grab the attention of kids, and that it most certainly will do this year when they see figures of their favourite heroes. With the emphasis on the Toybox mode as well, you can expect your young ones to be stretching their imagination for many hours as well, with the community also adding to the collection. The game has plenty going for it in the customisation department, and maybe giving your kids the tools to create their own world, can be cathartic for them.

If that’s the kind of game that you’re looking for, then prepare to be overwhelmed with options as Disney Infinity 2.0 now features enough content in that department to last at least another year, when they announce the inevitable Star Wars edition of that series. 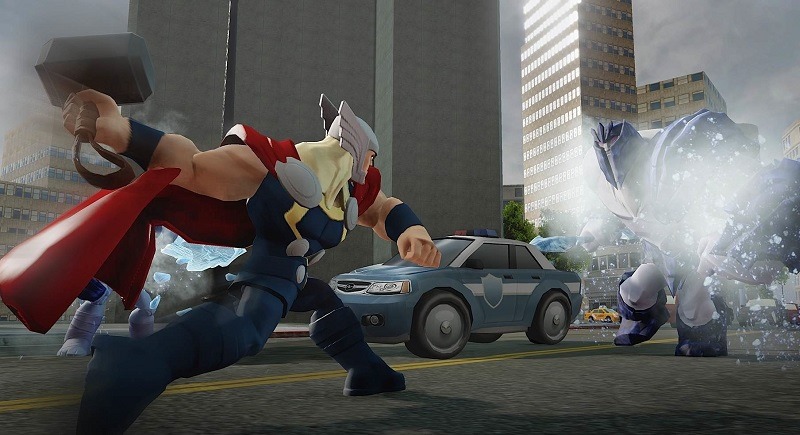