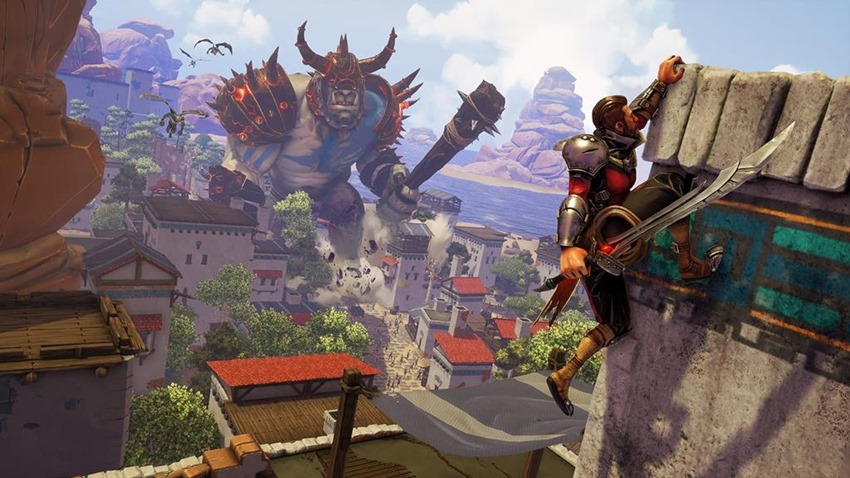 You’re not going to win. In Extinction, it’s hard to dismiss the idea that you’re constantly fighting a losing battle. Cities fall, scores of people are crushed beneath the sheer might of a demonic army and the food chain upon which humanity has comfortably rested on has been utterly toppled. In that sense, Extinction is a damn fine experience, a game which emphasises delaying the inevitable while providing you with ample tools with which to fight back against the titans that would attack the last remnants of a species that is thoroughly unprepared for them.

It’s just a pity then, that its magnificent giant slaying action is hamstrung by a collection of annoyances that even the mightiest giant cannot squash beneath his grotesque feet. 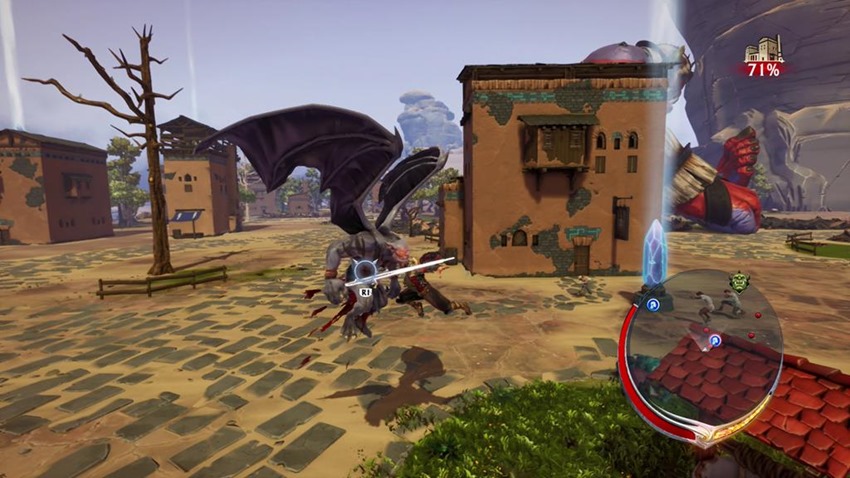 But first, the positives. As a game whose primary focus is on cutting behemoths down to size, Extinction is a masterclass. Too few games have ever truly attempted to capture the scale of what fighting a giant would actually be like, with most experiences usually revolving around players running right and left on a horizontal plane while a gigantic torso pummels the area around them.

Extinction throws that caution to the wind, giving players a titan to tackle on every stage. There’s an art to chopping a giant down, as players take control of the last Sentinel, Avil. The warrior may be outclassed in the size and weight department, but he happens to be armed with enough training to fell any foul beast, thanks to his Rune Strike abilities. 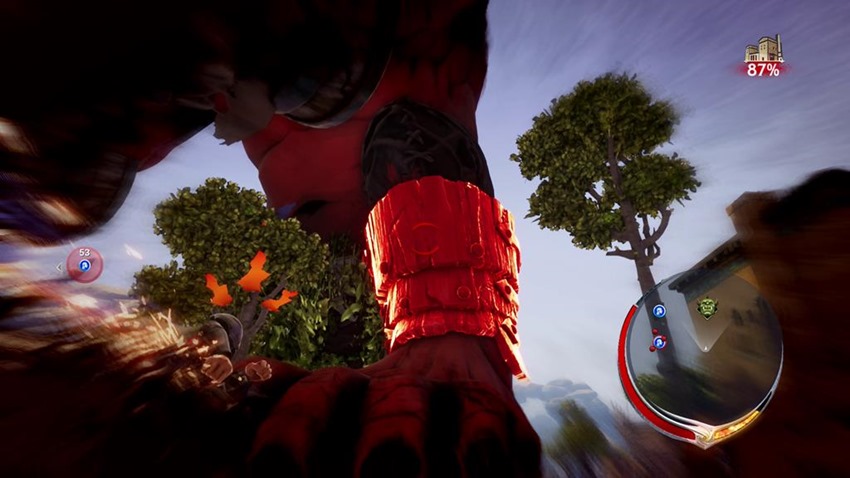 Avil is speed and precision, an agile slayer who can bounce across rooftops and climb a wall with more skill than a certain amazing arachnid-themed superhero. His skills are quick and deadly, a mix of the brutality of a god-killer and the style of a devil may care ass-kicker. Avil is easily able to fend off hordes of the invading Ravenii, but it’s the titans amongst them who pose the biggest threat. Able to clear a city with a handful of attacks and reduce the human population to zero given the chance, Avil is the only man alive capable of halting their advance.

How does he do that? By whittling down these giants, severing their limbs and leaving their necks open for a killing strike that stops the unstoppable. To deliver that coup de grace, Avil needs to charge up his Rune energy by slaying smaller Ravenii and rescuing citizens. It’s exactly here where the dichotomy of Extinction presents itself: Do you keep the city intact by amputating Ravenii limbs while the populace is picked off one by one, or do you risk massive collateral damage by saving the citizens while the town around you is razed to the ground? 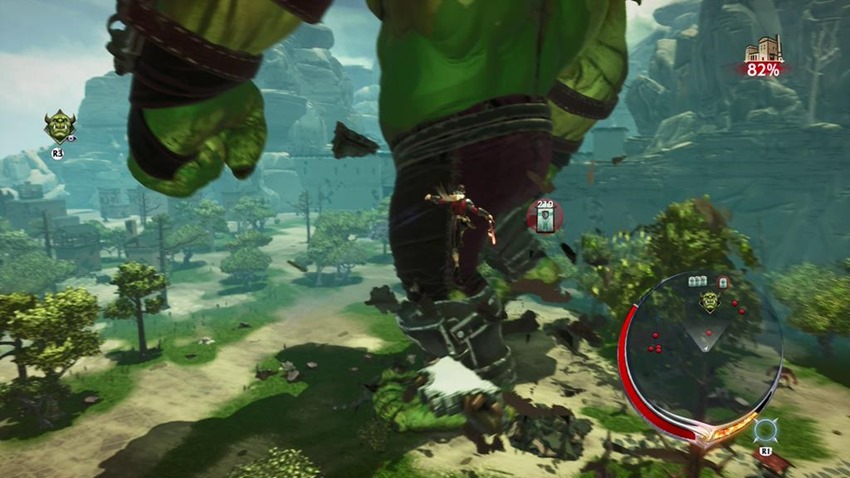 Avil’s job isn’t made any easier by the giants themselves, who pop up in several variations. Some stride into his attack range wearing nothing but crudely sewn together wood panels as armour, others have sturdy iron covering their limbs that can only be removed by hacking away at the locks keeping them in place and the toughest Ravenii have a regalia of thorns and magical spikes adorning them, that are all but invulnerable to Avil’s mightiest strikes.

Each giant is thus a puzzle box, although the final answer is always the same: Lop the bastard’s head off given the chance, preferably after he happens to have been reduced to a smelly quadriplegic thanks to your attacks. It’s that exact moment, when Extinction excels at providing a blockbuster sensation. That precise instance, when you’ve assembled all the pieces and mount the giant one last time, leap into the air and deliver a killing blow that extinguishes a particular threat once and for all. 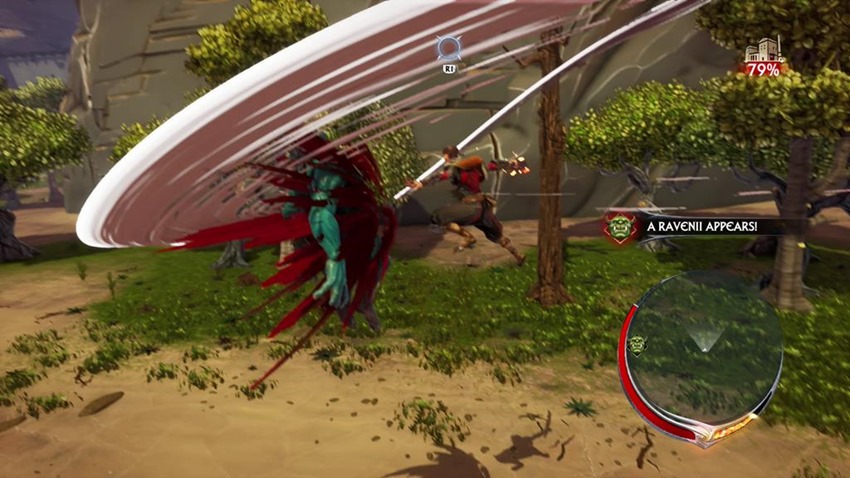 Few other games come close to that moment of glory, and Extinction provides it constantly. Getting to that exact point however, can be a Herculean task. Avil’s skills are many, but locked series of purchasable upgrades. You can grab a higher vault jump if you wish, quicker rescues of citizens and a constant supply of Rune energy if the fancy strikes you, but earning the skill points necessary to do so is an exercise in patience.

Death is a constant reminder, and while Avil can hop back into battle no matter how many times he happens to have been trampled underfoot or ripped to shreds by invading demons, it’s the people and the city that suffers for the constant deaths that you’ll endure for the first few hours of Extinction. Ordinarily this wouldn’t be a problem, if Extinction could decide on whether it wants to respawn Avil close or far from battle. 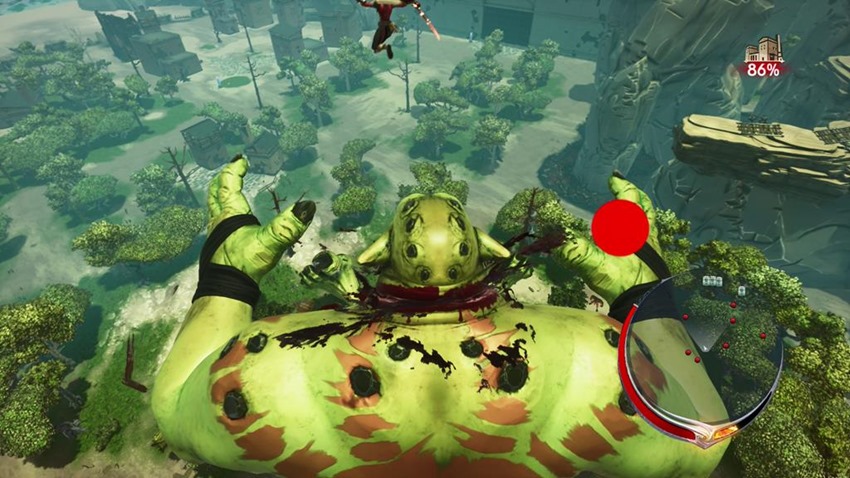 Too often I’ve been revived right beneath the exact same giant who squished me and happens to be happy to do so again, other times I’ve returned miles away from the battlefield and have had to find myself scrambling to stop the Ravenii blitzkrieg. Even those odd design decisions could be endured, if it wasn’t for the story mode which treats its entire campaign as one glorified tutorial session.

Extinction’s limited handful of characters may have charm and class, but they’re also a peanut gallery of constantly chirping backseat drivers, persistently admonishing players for not being good enough or acting as overly aggressive cheerleaders. Avil himself doesn’t provide much more than the usual taciturn white guy character development, although his frequent quips derails the experience even further should a player dare to attempt a different course of action. 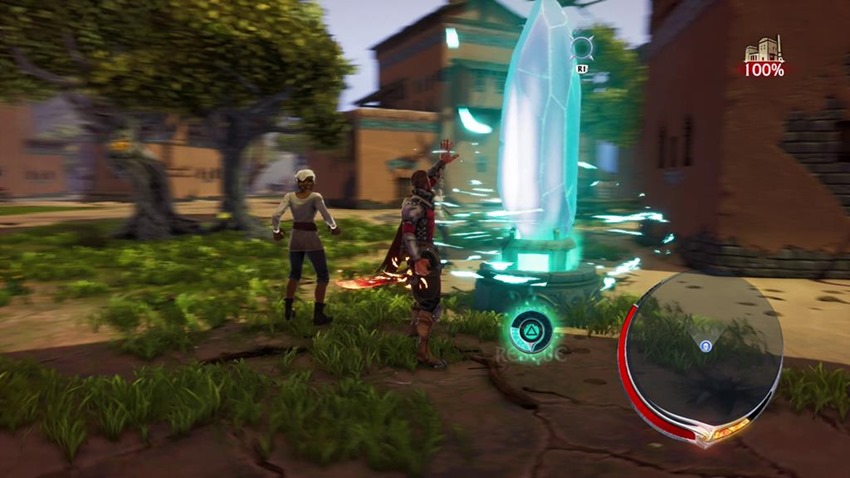 It doesn’t help matters either, that Extinction often takes a schizophrenic approach to mission objectives and the rescue of its populace, wildly alternating between levels that can be clocked in mere minutes to arduous endurance runs that sees objectives changed mid-game and the race against the clock made that much more frustrating.

It’s a Fee Fi Fo Fumble that can also be found in some baffling design decisions, such as Avil getting caught between citizens and a giant’s armpit thanks to even the most minute miscalculation, the titans themselves having a ludicrously massive and quick attack range or the lack of variance that threatens the long-term future of the game. 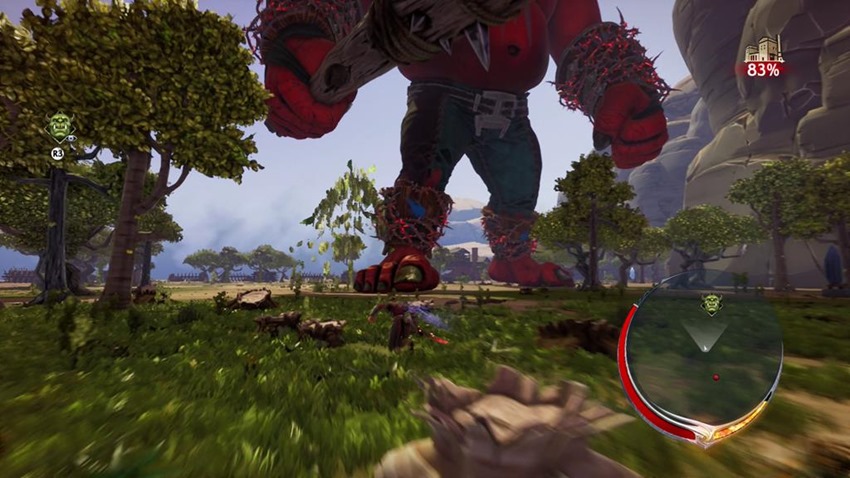 It may look massive at first glance, but Extinction is a much more modest experience. While there are some hand-crafted levels, most maps are procedurally generated, their tasks randomised and their enemies seeded. That’s not a slight against the game at all, as Extinction does a lot with very little and its core themes of fending off the apocalypse is still riveting in its execution.

It’s outside of this setup that Extinction does not have much else to offer. A sandbox of human-saving and titan-killing action, Extinction’s tale extends to a skirmish mode that is thankfully devoid of snide comments from the cast, a daily challenge and upcoming downloadable content. That’s it really. The core idea is solid but flawed by its surrounding content, mission types seldom vary and its formula quickly runs out of fun while becoming boringly predictable. 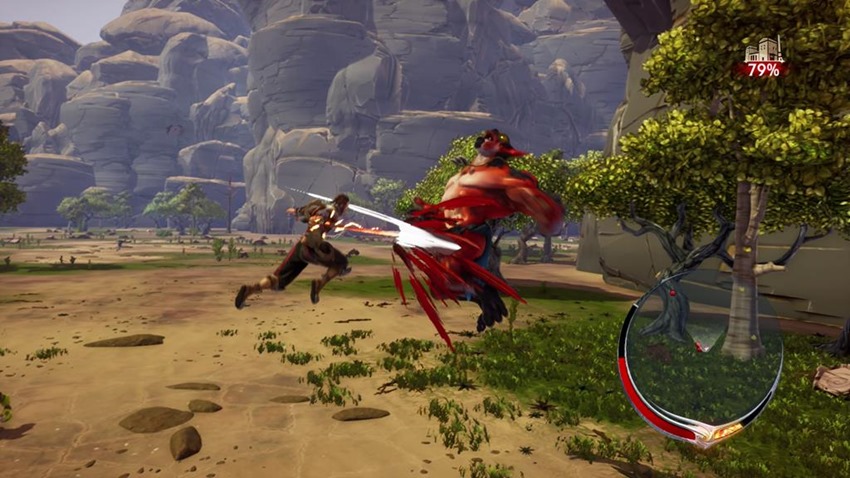 How much joy you derive from sticking to its core action loop is up to you, as that cycle of violence doesn’t offer much to begin with.