Home Gaming Farming Simulator 15 review: out standing in its field

I will admit, a part of me always wanted to try Farming Simulator. Why? I don’t know to be honest. Maybe it was my Portuguese ancestry surfacing, calling me back to be one with nature – to grow cabbages in excess. That, or I was just curious as to how a game could be popular enough to warrant the development of an actual tractor controller. Either way, I got my wish. A copy of the Farming Simulator 15 arrived at Lazygamer HQ a while back, and there was only one obvious candidate capable of facing the daunting task of managing the virtual fields… me of course! I accepted this seemingly easy task and climbed onto my digital tractor, ready to grow some profitable seeds. How hard could running a farm be? 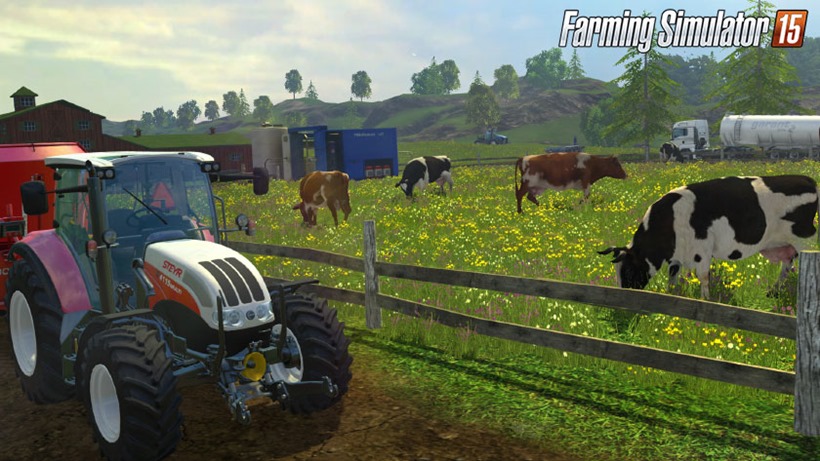 Pretty damn tough apparently, at least in terms of hard work. Farming Simulator doesn’t cut any corners, it’s the real deal! There is almost zero automation in the game, meaning all hard work has to be done – just like the real thing. I stay in Gauteng, on the outskirts of big city Johannesburg. Is it any wonder why this was a hard concept for me wrap my head around?

I’m all for working hard, don’t get me wrong, but I’m also all for having certain levels of “auto pilot” in my gaming. That being said, I’m not one to shy away from learning new systems, or adapting to difficult situations. I jumped into Farming Simulator 15’s tutorials headfirst, eager to learn how to work my land and make it profitable, even if it was by the sweat of my digital brow 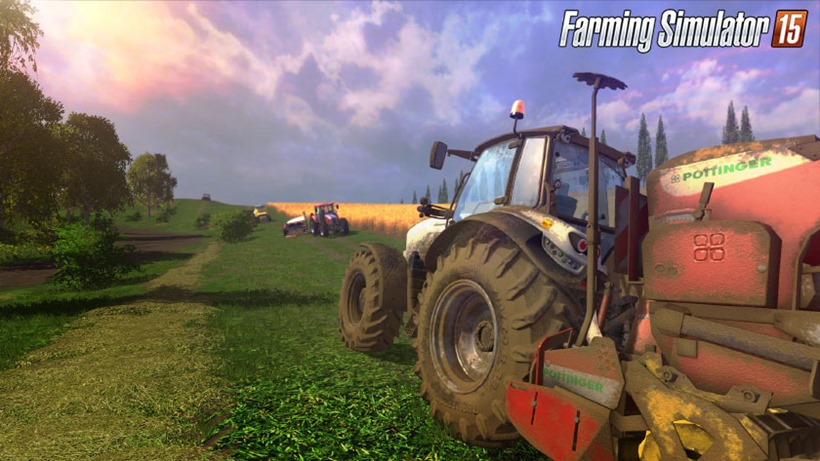 Problem is, the tutorials only cover the bare basics. I had my hand held through ploughing a field, adding seeds to it, harvesting it, and a few other farm related activities. Beyond that, not much else is shared. Farming Simulator’s biggest flaw is that it takes players’ knowledge for granted, assuming they have a better than basic understanding of farm equipment and exactly what each machine or piece of gear does.

When I was thrown onto my farm with some entry level equipment and a small debt to the bank a little while later, things started simple. I wanted to go back to my roots and plant glorious cabbages. This sadly, is not a vegetable that can be grown. I chose corn instead, and got to work.

I ploughed the field, up and down and up and down. Then, I planted some seeds, which entailed, yes, driving back and forth in neat rows once more. A little while later (I sped up the game time by 120x – which is a nice option to have unless I wanted to spend hours waiting), my crops stretched to the sky, and I harvested them. Again, this meant driving my field up and down (noticing a trend here?), and then depositing all my goods into a trailer when I was done. I then had to drive said trailer to the drop off point, where tipping all the contents yielded some cold hard cash.

The first time I did this, I wasn’t expecting millions in return, but I was expecting a decent payout, at least for all that hard work I had just done. I got absolute peanuts instead. No problem I suppose, a profit is a profit regardless, so back to the field to work once more! 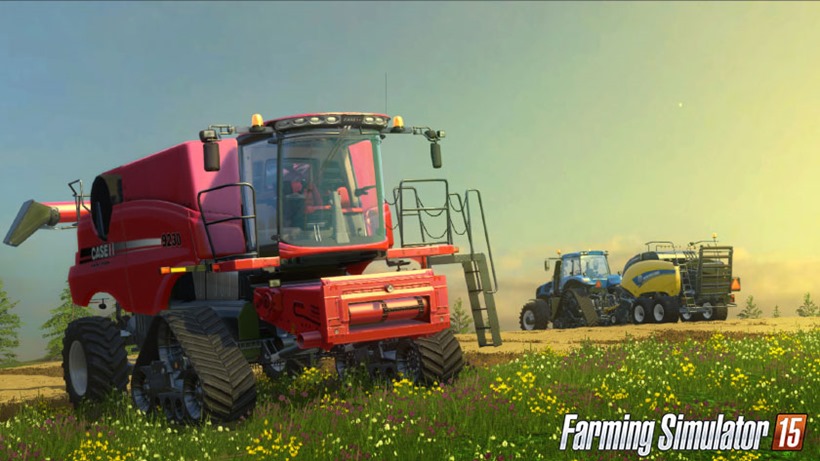 I discovered that it was possible to hire some AI drivers (for a small fee – pushing profit margins even lower) to do that painful field work I detested. I did so, which worked nicely, except I now had to sit and wait for them to finish up each field. Changing the game time only affects the in-game clock, not the actual speed at which the AI works.

When they were done harvesting, not one could drive the trailer to the drop off point to claim the profits of the harvest. I had to do that myself –  again, and again, and again. Worse than that, when I eventually started working two fields, I found that I could only have a maximum of 3 AI functional at a time.

Even WORSE was that sometimes, one of them decided to drive off into the horizon inexplicably. The number of times I found my harvester hiding in a random patch of trees a few hundred metres away from the field it was working happened far too often, and it screwed up the neat production line I had my other two AI drivers working on.

At this point, I decided farming the field wasn’t for me. It was time to maybe move on to owning some farm animals, or perhaps even doing some forestry. This is where that problem I mentioned above (Farming Simulator taking player knowledge for granted) surfaces – I had no idea where to begin with whatever job I chose to do. There is an in-game helpline, but it sheds little light on what is the right equipment that should be bought, of which there are dozens of options. I ended up spending more time on Google, reading optimal ways to get things done, rather than actually playing the game. 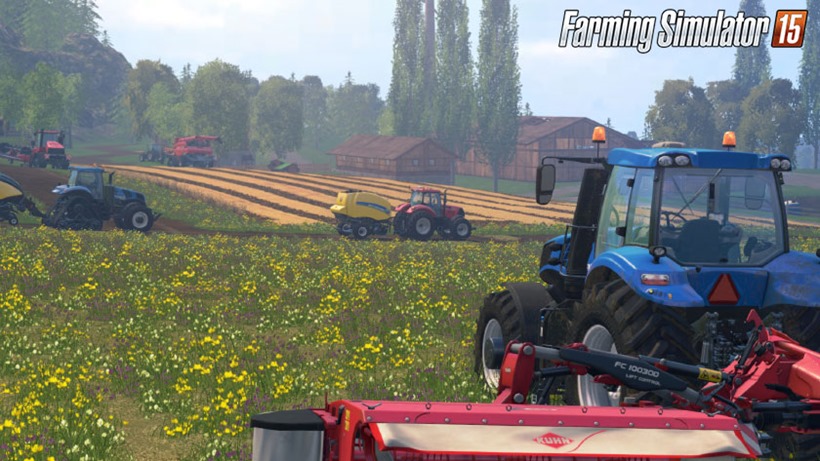 This is all subjective, though. If Farming Simulator 15 has taught me anything, it’s that I don’t like doing that much hard work. I play games to relax and unwind, and while yes, there is an undeniable sense of zen when cashing in a successful harvest, it wasn’t nearly enough to outweigh the annoyances I had while playing the game.

That being said, I am not the target market. Yes, I think Farming Simulator could go a long way in welcoming newcomers. Yes, I think it could be a lot better in helping to make things less “grindy”. Thing is, if you’re looking for a proper farm sim, this is the perfect package.

Do you want AI driving your tractor around and making your harvest drop-offs? Probably not. Are you ok with spending hour upon hour farming and slowly getting better equipment and expanding? Most likely, yes. 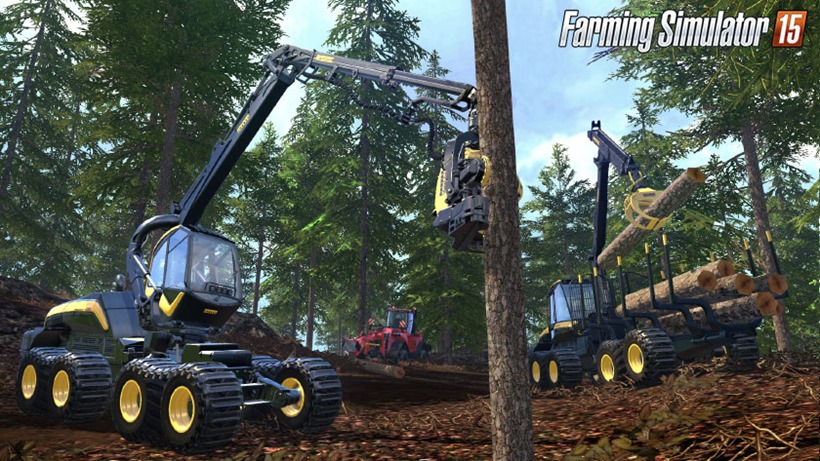 There is a giant playground here, filled with a ton of farming content to keep those people busy. Me on the other hand? No thanks, definitely not for me. I can see why other people enjoy it though. I just can’t bring myself to do the same.