When Gearbox won the bid to the Homeworld licence, it certainly raised eyebrows, and saw a mix of hope and fear for the franchise, particularly as the new team formed by many of the original Relic developers failed to get it themselves. And then Gearbox announced that, in collaboration with those aforementioned developers, they would be releasing a full remaster of the two main games of the franchise, with a heavy visual upgrade to boot. 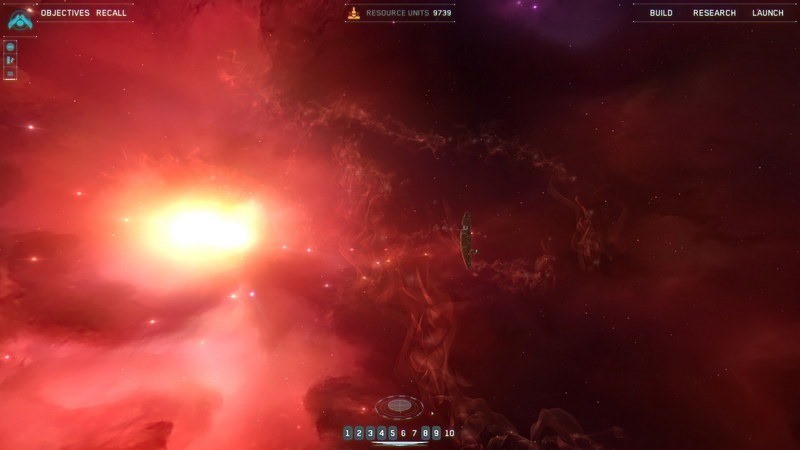 Is it worth it? Here’s a spoiler: It totally is. If you’re a fan of the franchise, you’ll absolutely adore the remastered edition. Assuming that initial spoiler hasn’t sent you tripping over yourself, your chair, and any loved ones unfortunate enough to be nearby in an effort to buy the game, let’s start with the most immediately noticeable thing about the remaster – how it looks. 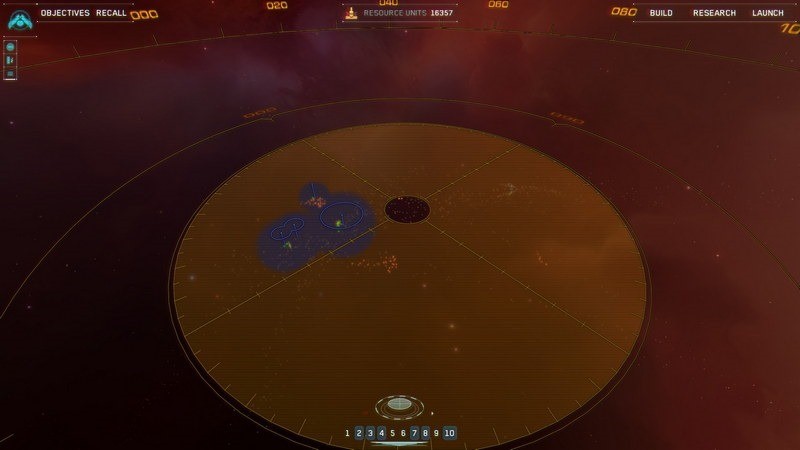 The game is astonishingly beautiful, though by now there’s no need for saying it as it’s been proven by many a glorious screenshot. I’ll still say it though, and keep saying it, because oh my god the visual rich-caramel-chocolatey-goodness look-tastes so delectable to my eye-tongues. Repeatedly I’ve seen visuals strongly reminiscent of 80’s science fiction artwork, and I’ve enjoyed taking screenshots of this game far more than is considered normal when it comes to general game reviews.

I fully admit a lot of the visual adoration is revisiting places within the game I experienced as a child, so I see a lot more value than someone new to the franchise may perceive for themselves. Nostalgia is wonderful but fragile, and many times the reality is a far cry from the mental ideas that memory coddle. What I’ve loved so much about the remaster is that it allows one to revisit the nostalgia of Homeworld 1’s campaign and actually see the game in the full glory one remembered it being when first experiencing it. 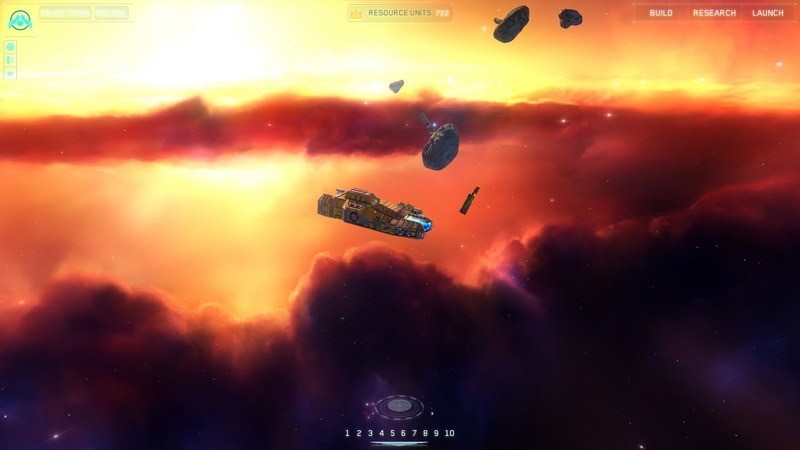 Additionally, the massive bump in detail has allowed a much greater look into the designer’s intent when it came to designing the ships. It also provides some new insights into how many of the ships function, such as revealing certain design elements are actually hatches, and so on. There are also a slew of nice visual technical tweaks, such as Ion Cannon beams that now accurately illuminate ships they fire from or over. The nebulae that surrounds levels now emits light as well, and seeing ships fly past actually obscuring that light is marvellous to behold.

Of course it’s not all about the aesthetic upgrades, and there are certainly some changes to be seen. To best understand what has changed and why, it should be explained that what the remaster has done is import Homeworld 1 into Homeworld 2’s engine, and worked to improve Homeworld 2’s engine so that it can be pushed into modern day standards, particularly when it comes to visuals, sound, and user interface. This effectively means that the overall remaster is a single game, with two separate and very different campaigns. This has meant that Homeworld 1 has adopted many of the mechanical and aesthetic qualities of Homeworld 2, including the UI as well as the more dramatically pleasing ship deaths. 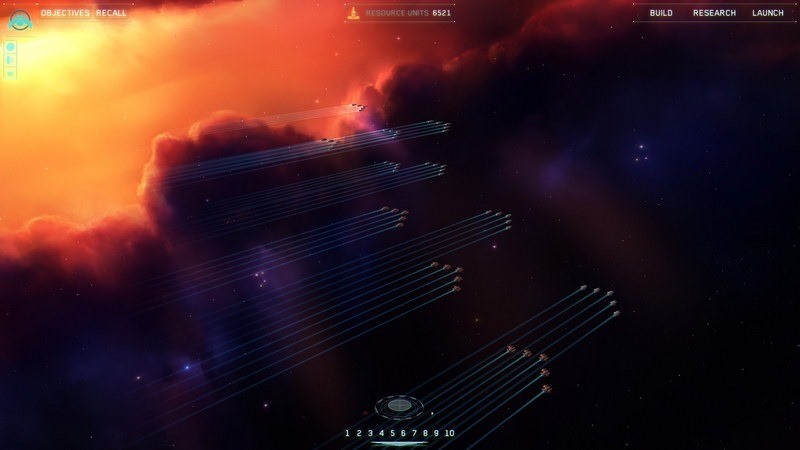 The merger has resulted in some larger differences for the original however, that affect the gameplay experience for the campaign particularly. The first is that research is no longer free and, like Homeworld 2, steadily drains resources as it progresses towards completion. This is a surprising new addition to economic pressure, though it is somewhat balanced out by another new change – salvageable wreckage from Homeworld 2, left by destroyed capital ships, are now also present in Homeworld 1. This provides a nice boost to economy that helps fund the new research fee.

The other difference is the removal of fuel usage from smaller craft. It’s not surprising in hindsight considering that Homeworld 2 had removed that mechanic originally, but it does reduce the role of certain ships which provided refuelling, as well as enemy ships whose sole purpose was centred on the mechanic. Particularly the Kadeshi Fuel pods encounter in the campaign, which helped resupply swarms of fighters and were thus an important and tricky focal point when fighting within the Gardens of Kadesh, are largely useless and can now be easily ignored.

UPDATE: I replayed the Garden / Cathedral of Kadesh missions a few times, paying special attention to the refuelling pods. The swarmers do indeed return to Fuel Pods, but it’s a pseudo variant of the original mechanic. Essentially, if one destroys the pods, the swarmers do eventually suddenly become idle as if they had run out of fuel. This is momentary, however, and they will then fly slowly towards pods and dock, which also heals them.

Apologies for missing this – the fact that they now retreat slowly, which I definitely did see, after being temporarily stranded made it appear to my mind that they had never been stranded at all. Compare this to the original where, if they ran out, they were permanently stranded in space – thus my confusion! 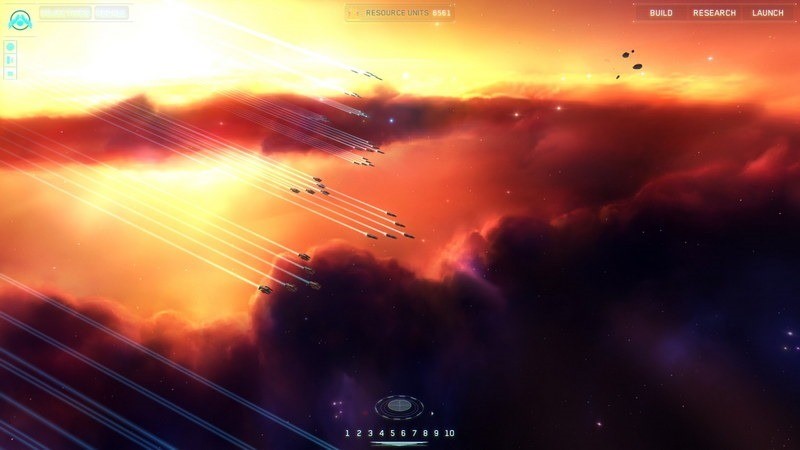 Of course, if one would prefer to simply replay the original, with all of its original mechanics, the remaster comes with the classic variants of both games, reworked to run on modern systems but otherwise entirely untouched.

And finally, the merger means that the multiplayer of the two games has amalgamated into a single entity, with all four factions playable. The development team have stated that bringing the two older factions into multiplayer has created difficulty in achieving balance, so for the moment they have slapped the term “beta” onto the multiplayer, and have opened the doors for players to help them achieve some semblance of balance. 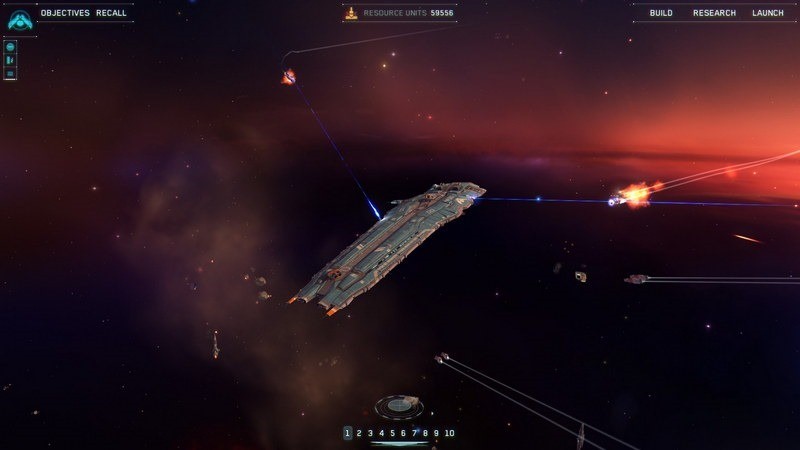 They also added something new to the Multiplayer: Relics. If included, a single relic will spawn somewhere in the central part of the map. When a player secures it, the relic slowly generates an increasing amount of resources while held – though opponents can try to steal or destroy it. In the case of the latter, a new relic will randomly spawn some time later.

So, how does the classic play today? It’s generally been a fantastic experience, barring one or two disappointments I noticed, though I’ll speak on those in just a bit. Considering how few games have attempted to recreate the fully three-dimensional gameplay, how few have tried to change and advance the idea, the formula doesn’t feel dated at all. The game is still as challenging as it was, and still very enjoyable for it, and I’m still pleased at how pausing to issue orders allows for a nice level of micromanagement within the chaos of a larger battle. 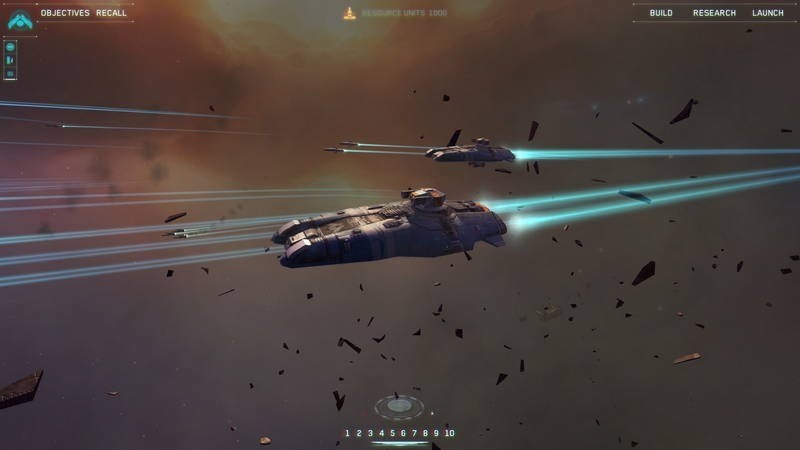 The stories of the two games are still enjoyable to experience, though tempered by former experience. It’s been a pleasure once again playing through a wonderful mix of ancient saga mythology mixed with far future interspace travel, all mixed with beautiful colours.

That said, it wasn’t all roses, as I did also run into some small issues when playing through the remaster of Homeworld 1. Once or twice about half way through the campaign, certain cinematics or story related dialogue didn’t trigger properly, requiring me to load an earlier save and simply making sure I wasn’t doing anything during the time I recalled (from childhood) something should happen. It also seems that through the transition, some ships from the original have suffered a bit – particularly the Minelayer Corvettes, which I’ve unfortunately had a lot of trouble trying to get to work properly in the remaster. Overall I’m extremely happy with the remastered edition. Honestly, I’m happy enough that I can actually install and run both games with no additional hoops to jump through.