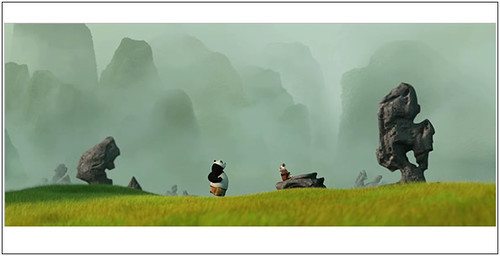 The proverbial movie cash in Video game has long been a part of our gaming lives, and it was no surprise to me that Kung Fu Panda showed up on our doors this week, and even though Gavin Aka Lazy has been looking forward to this game immensely, I was not so excited. I thrust the game in the console over the weekend, and BAM, my opinion of movie tie-ins were about to be changed.

Firstly, I have not seen the film yet, as it only launches next week, but if this game is true to the movie, then hell I’m going to see it on release day. It looks bloody funny.

It’s set in the world of Po, a panda learning the arts of Kung-fu, fighting alongside the furious five, a group of fighters named Monkey, Tigress, Viper, Mantis and Crane.

The Story revolves around Po the Panda, voiced by Jack Black in the movie, but not in the game, but the guy is really good nonetheless, and his endless quest to learn from his master, Shifu, the art of Panda Kung fu. He fights with the members of the Furious Five, all in the name of defeating the Big Bad Guy Tai Lung. I would love to understand the story a little more, but it seems like it’s a game that takes its cues from the film, and I’m sure I’ll recognise a million different things when I actually see the film. 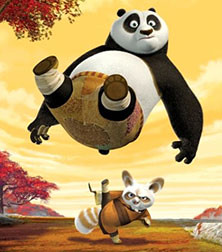 From a gameplay point of view, it’s a button mashing Third Person fighting game, with Po learning various combination of play as he progresses through the game. You also have a skill upgrade path, which adds a depth to the game rarely found in movie tie-ins. You obviously start off with a limited, yet effective set of moves, but as time goes on, Po turns into a lean (okay not so lean), mean fighting machine.

You progress through 13 different missions, each normally with a basic main objective, like wiping out the boss character, and then generally given a more secondary objective, like collecting things etc. Most of the levels were great, and really varied, but there were a few that broke from tradition, and actually became a bit frustrating. This was by no means the norm though.

From a graphics point of view, Kung Fu Panda is delightful. The animations are incredible, and the textures are really well done, the fur of the animals looks simply amazing, and adds the authentic DreamWorks feel to the whole experience. The levels are as colourful as ever, and the levels are designed really well, and add the nice Japanese style of architecture to the game. The characters become loveable in the game, even some of the bad guys.

To mention the sound is also a highlight of the game, with voice acting done to an absolute professional standard. The surrounding noises give a great sense of atmosphere, and the surround mix is awesome. The jokes in the game are really funny, and the dialogue, while providing the usual movie tie clichÃ©s, is generally so good, that you won’t want to miss a beat. 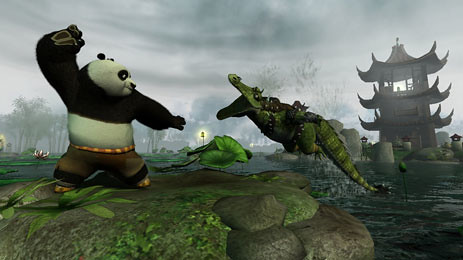 The overall experience of the game was very refreshing for a movie tie-in, and I can say that the movie release of a game has never ever convinced me to go and actually watch the movie. In fact, most of the time, they would normally put me off the movie so much, I would not even bother.

In conclusion, Kung Fu Panda the Game is a total surprise to me, and I cannot believe how well it turned out. It will be fun for all ages, from kids to adults, and if I had the choice of just one movie tie-in to buy, this would be it.

[Ed] Did anyone ever doubt the power of the Panda? 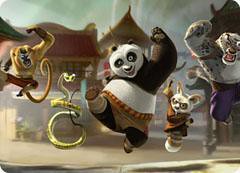