Lara Croft is an icon of video games. Her empowered, tough and adventurous spirit is fun for everyone. With increasing production value and improved gameplay, Lara Croft games are also getting critical acclaim and love. Unfortunately, this is not one of those titles.

Lara Croft and the Temple of Osiris has a fairly basic premise that will make fans of Egyptian mythology cringe. Lara and her usual sidekick/opposition, Carter, stumble into the titular temple. There, they find that Osiris has been ripped to pieces by Set and scattered. Lara and Carter are joined by Isis and Horus as they seek to put the God back together and bring down holy vengeance on Set. The story is relatively straight-forward, even if they sometimes mix and match elements of Egyptology, and it’s all built to get you dungeon crawling as soon as possible. 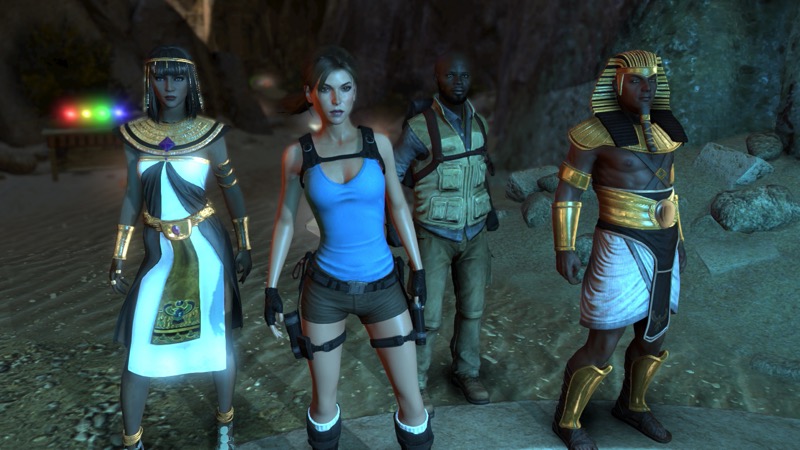 There are various tombs scattered around Osiris’ temple complex. Each one is filled with a unique set of treasures, traps, monsters and puzzle platforming. While you can play the game by yourself, it is mind-numbingly boring to do so. I managed about half an hour before I thought I would fall asleep or just give up on the whole thing. The game is actually built around co-op, and that’s the strength of the experience. Team Lara up with an ancient Egyptian god(less) and you can explore all the various areas, unlock each puzzle and truly co-operate. The game adapts depending on the number of players as you bounce beams off of mirrors or flip switches and jump from one platform to the next.

Unfortunately, the gameplay isn’t exactly stellar. Despite being a platformer, the precision offered for jumps and other maneuvers often feels muddy – accidental deaths are frequent and frustrating, an issue exacerbated by excessively long loading times. Sure, the checkpoints are excellent and you won’t find yourself running through huge portions of the dungeons repeatedly, it still makes the game wear thin when you fail a puzzle due to lack of jumping precision rather than not knowing what to do. 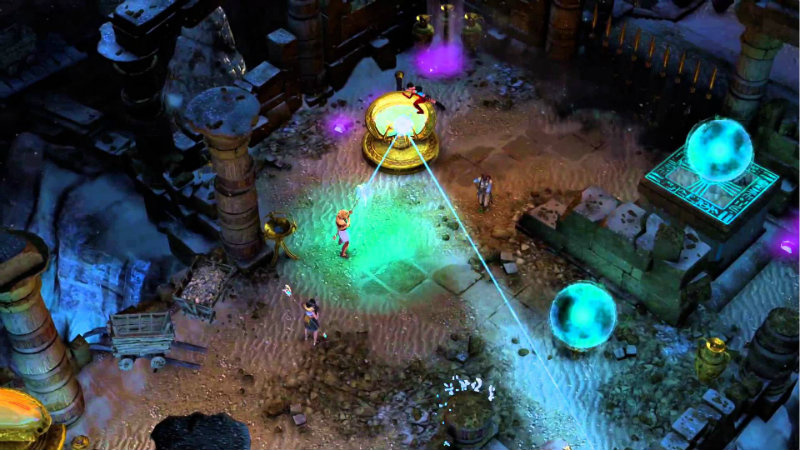 Combat is similarly muddy. Lara and her companions are offered a wide variety of guns ranging from handguns and assault rifles to flame throwers and grenade launchers. However, the damage that they inflict and experience of using the various firearms doesn’t really change the game – I found that I picked a favorite weapon (the dual machine pistols) and just used them for the entire game.

There are other ways to customize your characters. While dungeon crawling, you can pick up various gems. These gems can then be used to open chests. That’s right, this isn’t your ordinary adventure where you can open every chest you see – you will need to spend your gems carefully and select which chests you hope contain something worthwhile. Most common items have pros and cons to them – you might find that your damage is increased, but so is your susceptibility to various attacks. This becomes an interesting balancing act… until you gather enough gems to open better chests and get uncommon items. These tend of have a whole bunch of buffs with little to no adverse effects.

There is nothing about Lara Croft and the Temple of Osiris that feels innovative. It’s mostly the same sort of isometric adventuring that we’ve experienced in games before. The puzzles are fairly straight forward and most of the boss battles can be completed with a bit of trial and error. 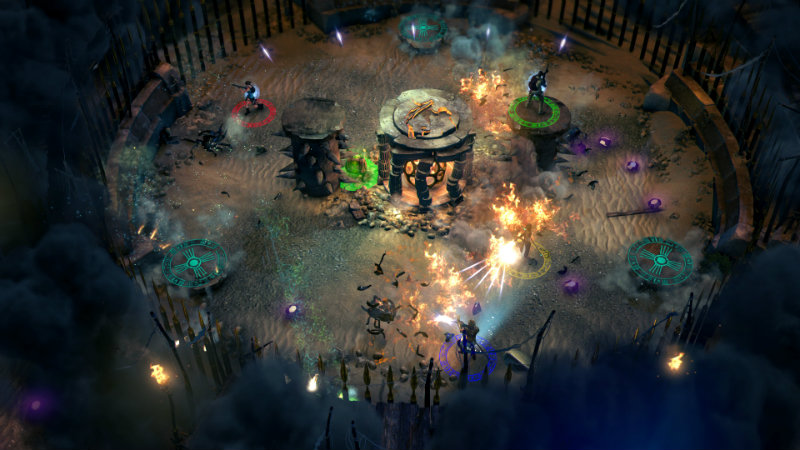 The real pleasure of the game comes with the ability for couch coop. Assuming you have enough controllers (or people with Vitas to be used as controllers), you can play co-op of four people, offering fun for a nice collection of friends and/or family. It isn’t exactly riveting or exciting gameplay, and most of the cut scenes and dialogue is lifeless, but if you’re looking for a relatively cheap game to play with friends for an afternoon, Lara Croft fits the bill.

Don’t expect to play with strangers, though. The entire time I was reviewing the title, Square Enix was having issues with servers and lobbies, making online multiplayer impossible.