Legends of Eisenwald is a new genre crossing indie title developed by Russian company Aterdux Entertainment. LoE had been in Steam Early Access since around 2013 and was officially released on the 2nd of July this year. Like many of the titles kicking around in Steam Early Access, LoE found its feet with a Kickstarter campaign where some 2700 backers pledged a little over $80 000 to bring the game to life. 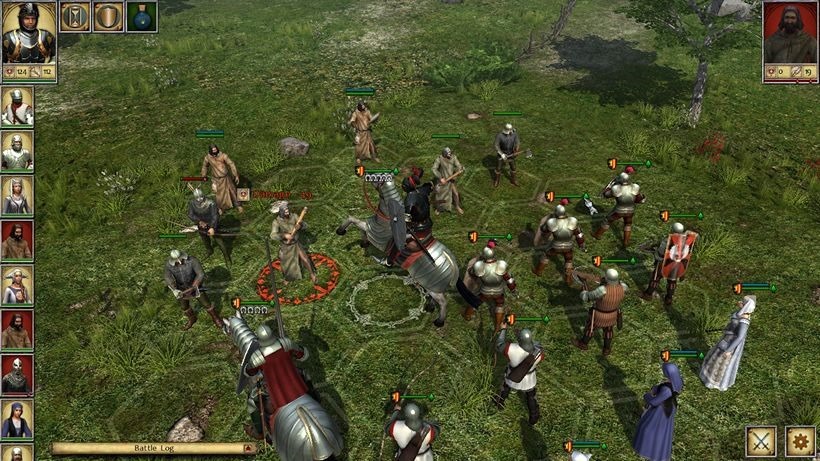 The game is officially described as an adventure game with tactical battles and a mix of elements drawn from old school RPG and strategy genres. The game thus presents itself as an indie title with a rather mixed big bag of originality (read innovation) at its side. LoE is set in the standard European low fantasy medieval period. This precludes the use of a lot of the high fantasy core elements you would expect from a game like this. In other words don’t expect dragons flying out of the sky to torch villages, nor Mages firing bolts of electricity from their fingertips. What you will get is a historically appropriate tale of noble intrigue, betrayal, and the odd engagement of the third kind with a ghost. Or three. If you’re lucky.

On the surface LoE plays like the exact opposite to a Total War strategy title. In Total War you probably know that you get a turn based campaign map (with cities, unit production, army movement, etc) and then real time battles as armies on the campaign map engage. LoE has a real-time strategy map and turn-based combat. The game focuses heavily on narrative, where the story is driven chapter by chapter. In the very first chapter (or tutorial) you pick one of three characters to start the game. 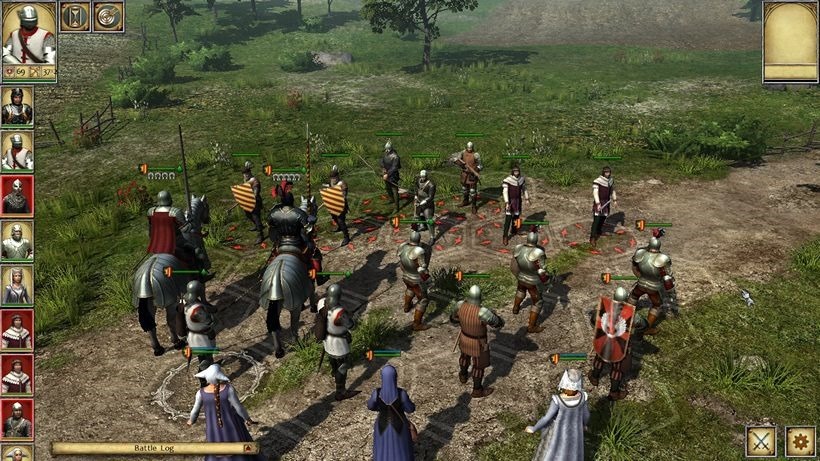 Your character choice is limited to one of the three major unit classes: The Knight (infantry class – can later acquire a mount), the Baroness (range class – can focus on crossbow or longbow), or the Mystic (support class – applies buffs/debuffs and heals). Regardless of your choice, the story continues much the same regardless. You are a young noble visiting the lands of your father’s good friend. En route, you’re attacked by some unknown enemy. What follows is a Game of Thrones styled story of betrayal, vengeance, and powerful people being generally awful. And the very few genuinely nice people you’ll probably betray and kill. This is because character development and strong narrative requires moral dubiousness at every turn.

LoE also describes itself as having elements of RPG and strategy. It does this because you recruit the unit types you want in your army and upgrade them as you see fit. Want an army full of archers? Sure, go for it. I mean I don’t think it’ll be successful, but hey it is your money, not mine. You can have up to twelve units in your army (you start with six, but need to capture enough castles to support the other six). I personally opted for five infantry units (in the first row), four ranged archers (in the second row), and two support units with one archer (in the third row). These all start out as basic units and each can be individually upgraded along two or three paths (provided enough experience is earned). 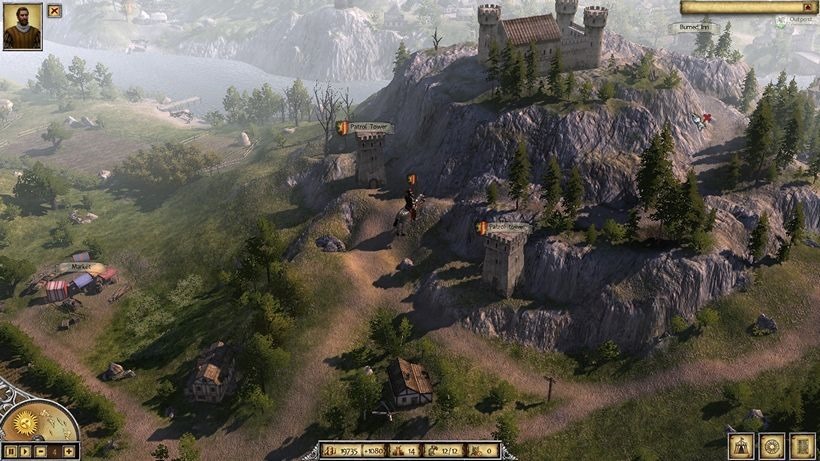 For instance, basic infantry can eventually be upgrade to wield defensive pikes or heavily armoured infantry with sword and shield. Noble infantry can be upgraded to become dual sword wielding assassins or heavily armoured cavalry. Archers can eventually wield traditional bows or opt for armour piercing crossbows. Support classes can focus on healing, or various buffs. Either way, your army can be crafted to suit any type of play style you prefer. Items you find in the campaign map (by doing quests or as random loot) can then be equipped either on to your hero or on your units in your army (giving you a real sense of progress). This is a real strength of the game and one of the most enjoyable parts of playing this title. Actual turn-based battles are a complete joy to play.

The medieval army you’ve designed and outfitted gets to go up against whatever you decide to destroy. LoE puts a little twist on the usual turn-based combat system, though. Here, you don’t get movement points. Each unit gets initiative which dictates their ‘turn’ in combat. Once it is their turn each unit has to attack, or use a defensive move (if they have one). Close combat units have to attack the units closest to them, while ranged units can attack any unit they desire unless an enemy unit has closed onto them in which case they have to attack their attackers. It’s an interesting little twist on turn-based mechanics that opens up a wealth of new tactics to explore. 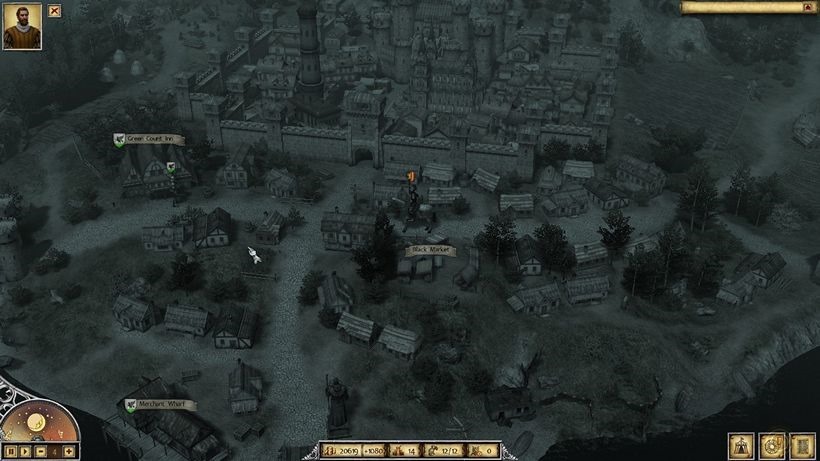 The campaign map itself is where you as the hero get to move around. Imagine the traditional top down Total War Campaign map view, but with significantly more detail. Villages are areas that can give quests, provide levy troops and sell gear. Taverns are places that can provide expensive mercenaries. Churches can heal your troops (for a price). And castles are where feudal lords govern their lands and collect taxes. In many chapters you’ll spend a lot of time capturing castles to provide yourself with the income to support your army and outfit your troops. You can also garrison troops in your castles (or watchtowers, towns, whatever you capture really) and they’ll continue to slowly earn XP over time. There is also an in game cycle of day and night (which provide various effects on battles at those times). The campaign map also serves as the primary narrative device. It provides all the information you need to make sense of the world around you.

Pay careful attention to all the NPC dialogue here, because every sentence could prove the difference between you knowing what to do to complete a quest or not even knowing where the quest began. The plot is serviceable enough, but isn’t terribly engaging. I found myself skipping entire segments of text because I just wasn’t interested in another peasant’s plight. The writing often leaves a lot to be desired and the translations (from Russian to English) be troublesome.

After your tutorial chapter in the main story arc you travel to the next chapter. And the game will continue like this, chapter to chapter, where each new chapter gives you a new map area to explore. Once you have completed a chapter, there is no going back. Often any progress you make on your hero you will keep while moving from one chapter to the next, but most (if not all) your units will stay behind as will any/all items you’ve kept in your inventory. You’ll also lose all the gold you accrued in the previous chapter. 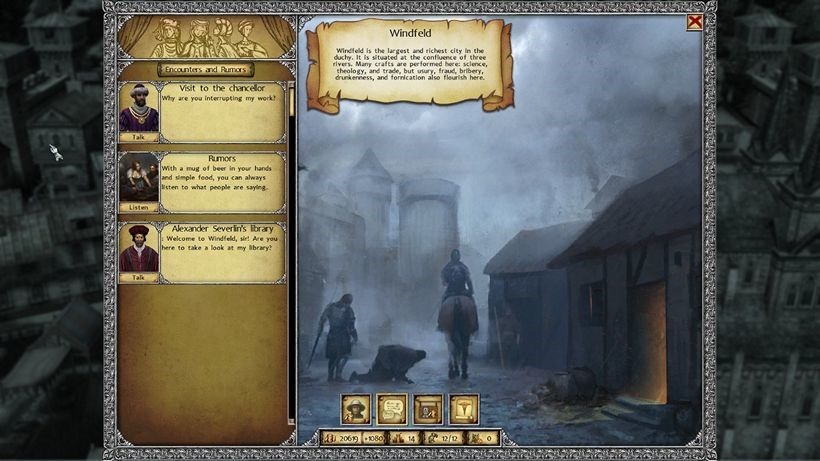 In fact, sometimes the logic of the story will really upset you. Even if you have twenty castles, more gold than the Pope, and enough troops to finally take that pesky Russia, the game will still force a story on you that you’re fleeing from X for Y reason and that you’re not strong enough to take his/her one castle – when in fact you were just given the freedom to take over an entire duchy in the last chapter on your own, but because that doesn’t fit the plot it’s just ignored going forward. And this is honestly where the game starts to lose the plot.

Yes, it plays like a strategy title for the most part – but the structure of the narrative gameplay feels forced in too many places, undoing the marvellous job LoE had done to include interesting RPG and strategy elements. Have too much gold? Troops too advanced? That’s okay. We will just remove them for the next chapter to force narrative device A. Too many items in your inventory? Don’t worry. We’ll get rid of all of those for you. So you can spend countless hours really enjoying a chapter and taking your time to outfit the very best of the best, only to have all of that progress destroyed in front of your very eyes for no other reason than that the plot desires it. 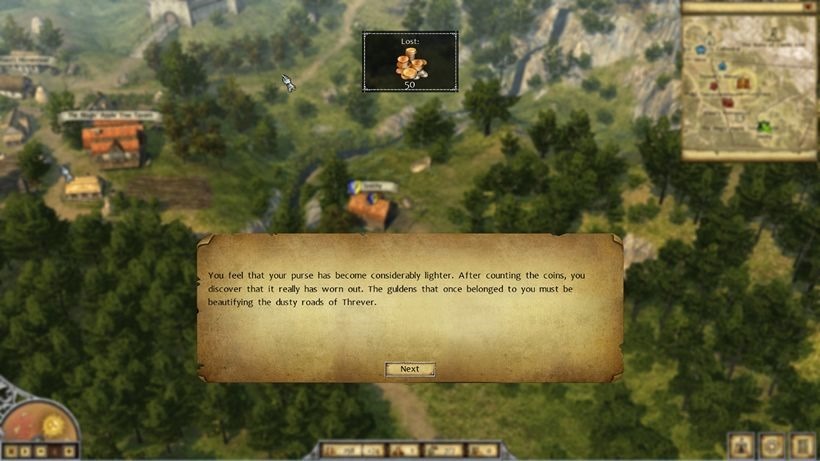 In one advanced chapter, your character suddenly develops an affinity for dropping large chunks of your gold on the road. A tooltip (one of the very rare occasions a tooltip really lets you know anything) pops up to even let you know when this happens. And instead of picking it up, it’s gone – forever. At this point I was losing roughly a fifth of my gold every few minutes. At the same time items I had in my inventory suddenly started to develop rust and become unusable (resulting in the items being removed from my inventory entirely).