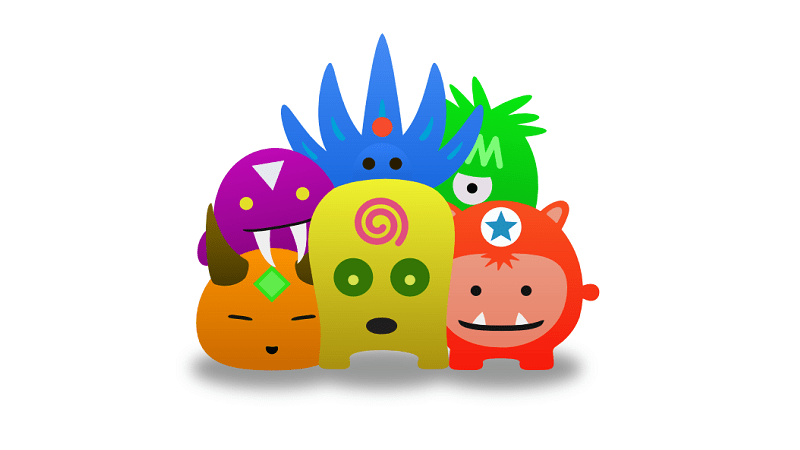 I have a soft spot for simulators thanks to the likes of Theme Hospital. That classic game tasked players with building, diagnosing, and curing patients, all while managing the equipment, staff, finances, as well as death. I loved it, even if it was tough as nails towards the end. With that in mind, I was quite happy to receive Monsters and Medicine, a local indie game from Clockwork Acorn with a similar premise. It’s a lot more simplified and more puzzle focused in comparison, and instead of curing humans, your job is to heal monsters.

Monsters and Medicine in itself is easy enough to understand. You almost always start off with nothing more than a lobby and a handful of monsters outside your hospital who need help. The lobby tells you how many patients you need to cure in order to pass the level, as well as how many deaths are permitted before you lose. 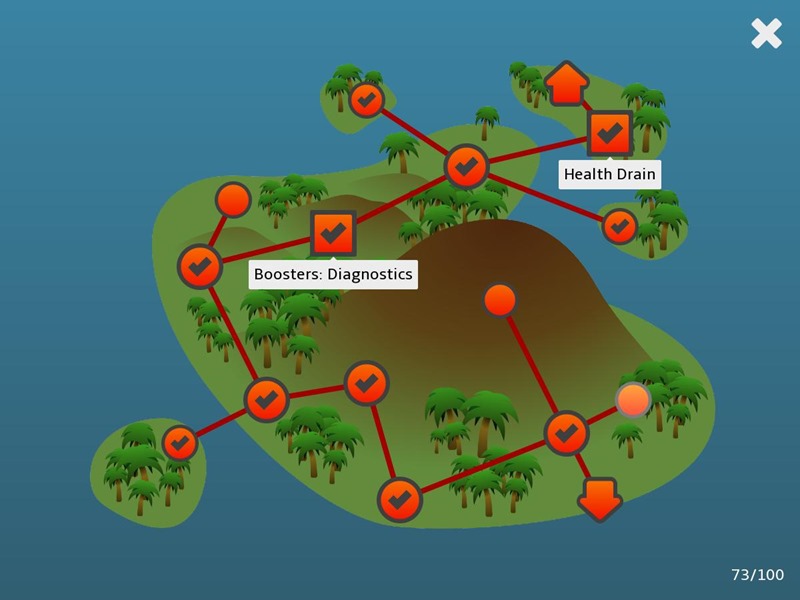 In order to deal with this mob of creatures knocking on your door, you need to build wards that correspond to their colours. Once that is done, those particular monsters may enter your hospital and go to their relevant room for healing. Once cured, they are sent home and other monsters may enter (assuming there is space and a specifically coloured room for them to rest in). Any monsters outside your hospital gradually lose health, which if unattended, will result in their untimely death.

The colour of monster is extremely important. The green monsters have a large pool of health and they last longer in the queue, whereas the orange monsters are bordering on death on arrival. The red monsters appear in larger numbers, but as a result, the red wards are better equipped and will heal them faster. The purple monster is a bastard because it leeches life from the monster in front of it while waiting, resulting in a far higher drain rate than normal. Blue monsters are smaller, which means that two of them can be accommodated at once in a blue ward. The yellow monsters are… pretty average, yet a nuisance nonetheless. This all needs to be kept in mind when deciding which rooms are a priority. 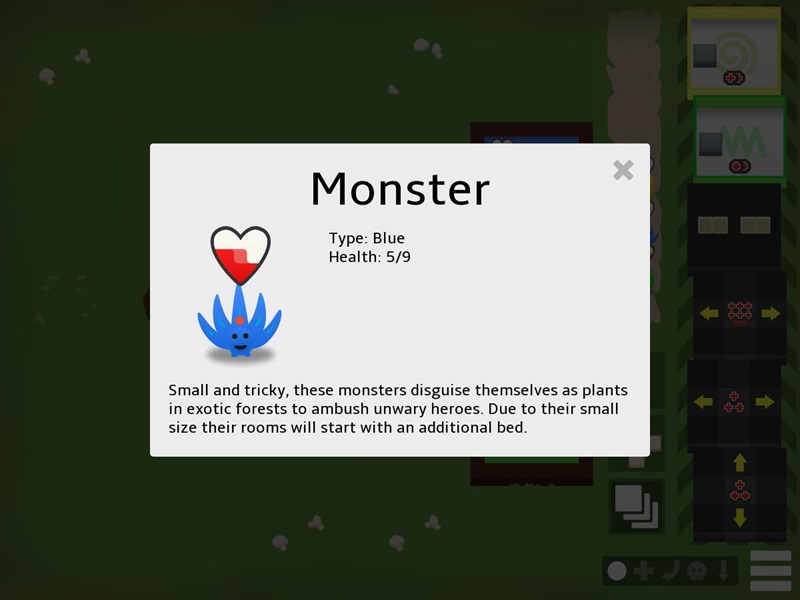 To complicate things, some areas have natural hiccups such as puddles or pits, meaning you need to build around them. Each hospital also works on a first come first serve rule. If you don’t have a ward to put the front-of-the queue monster in, tough luck. Everybody behind has to wait for it to be served before they can proceed. 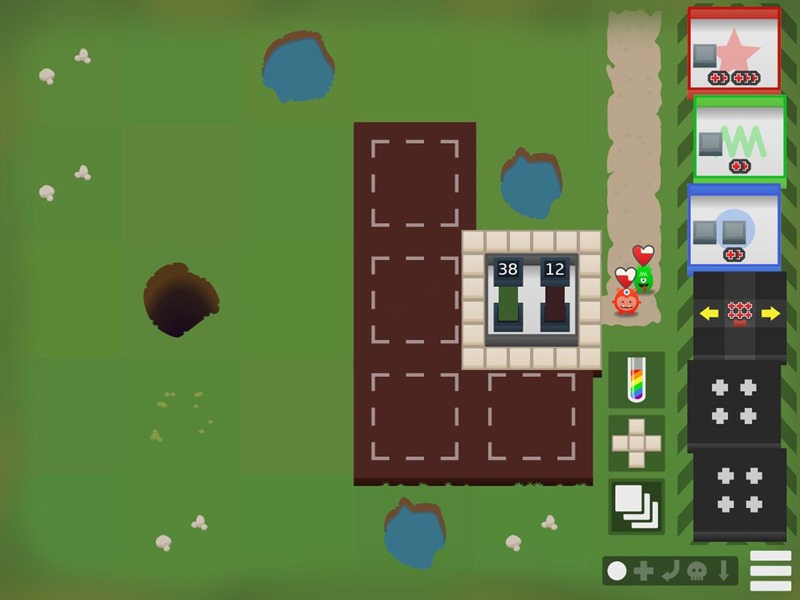 All it takes is one unattended monster to get stuck in front for a horrible bottleneck to form. I can’t tell you how many times I failed a quest because I neglected building a certain colour room for whatever reason (limited space, not a priority at the time, etc), and that monster sat right in front dying slowly each turn, along with everything behind it.

To aid the player and spare them these headaches, there are several utility rooms. Some will boost the cure rate or bed count of adjacent wards. There are also paramedic room which prevents four monsters in the queue from ever dipping below 1 health. Lastly, and these are rather important, there are waiting rooms where monsters who cannot be helped at the moment use to kill time, allowing those behind them to pass. Kiss those pesky bottlenecks goodbye! 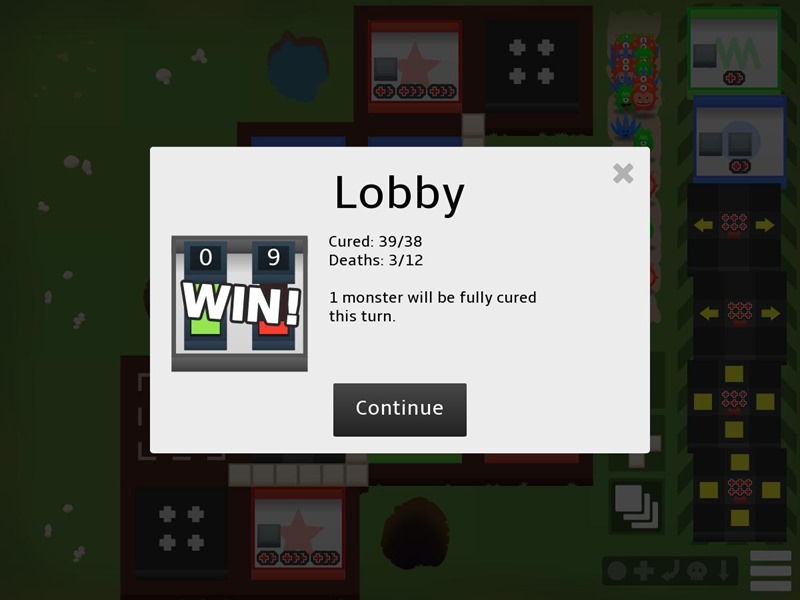 Now that you know just about all there is to know about the game, how does it actually play? The first few levels are simple (as expected), but it wasn’t long before the challenge seemed to ramp up. In fact, it seemed a little too much at first. I got stuck on some levels for what felt like ages. After enough trial and error though, I soon learnt a few tricks which aided me incredibly.

It is important to get as much use out of your utility rooms as possible, especially those that boost cure rate and bed count. Once I learnt to place and use them effectively, things seemed a lot easier. It’s also important to think ahead – letting that handful of monsters die now because you are spending time focusing on getting a good balance of rooms can really benefit you in the long run. 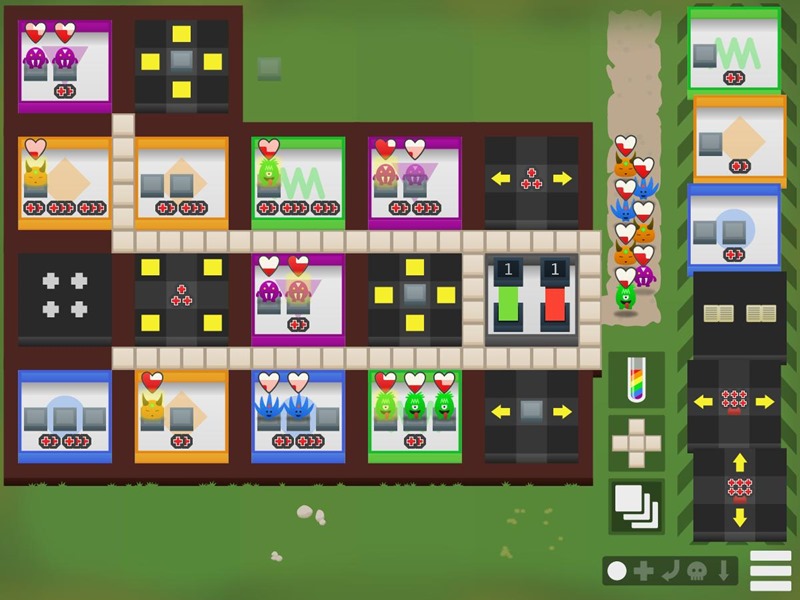 The game is not without its annoyances. A player can only build one of 6 rooms at any given time. There were occasions where I just never had what I needed, forcing me to use the shuffle option which takes up a valuable turn. The monsters also seem to arrive randomly (to a certain extent), meaning that if I got dealt a bad selection of rooms and an excess of one kind of monster for example, there was just about no way I could win (unless I am THAT bad). There were also moments when quests were inexplicably easy, which I’m willing to bet was just blind luck where I got a nicely balanced queue of monsters and available room selections.

I had random slow downs and crashes now and then too. While irritating, it wasn’t nearly enough to get me to stop playing. I also couldn’t play in a maximised window for some reason, as doing so made the mouse cursor disappear entirely. These are things that can obviously (and may have already been) ironed out. The windowed mode turned out to be a blessing actually as the game is perfect for short sessions. I definitely had my fair share of monster curing between article writing. 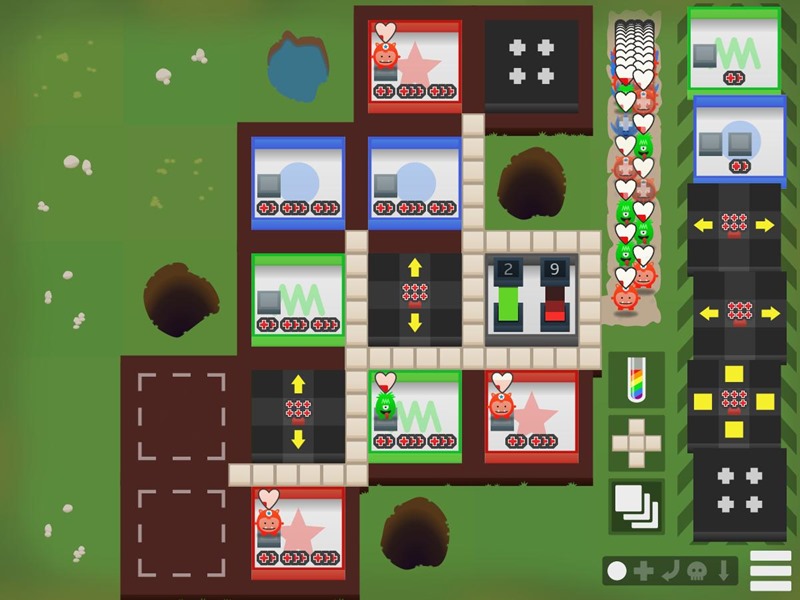 My last concern is that the game is only available for PC. This isn’t necessarily bad, I just feel the game is much better suited for mobile platforms. I would happily play it on my phone or tablet if it were at all possible. I really hope the developers plan on porting it at some stage.

At $4.99 a copy, I really find it difficult to not recommend Monsters and Medicine. There are 100 quests (some of which are completely optional) as well as a random stage generator. If you are interested in trying the game out before purchasing, you can find a playable, web-based version right here.