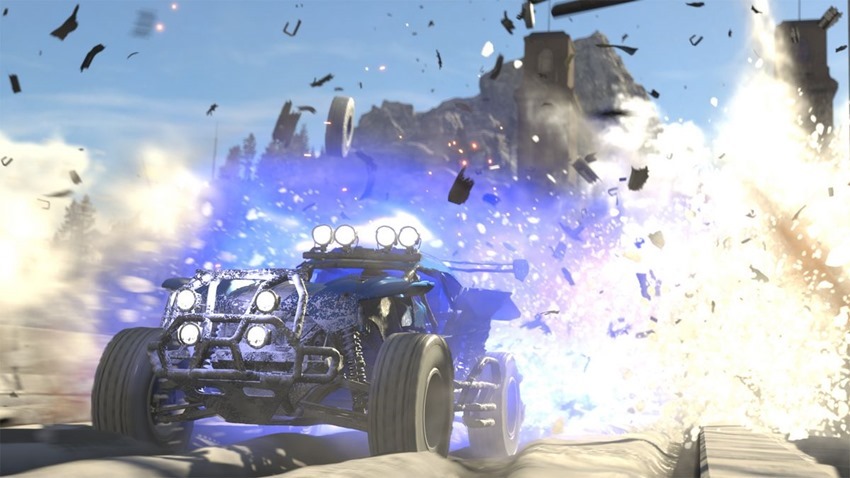 Onrush has a simple premise; wreck other vehicles, and do it at top speed. This is not a traditional racer however as the focus is much more on cooperative and competitive multiplayer rather than chasing first position. Players will partake in one of the game’s four modes and have to work together towards common objectives as a team to win. 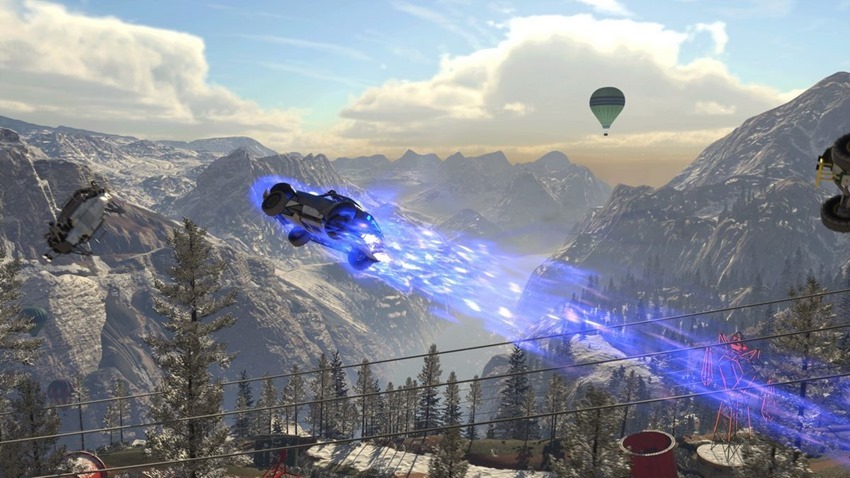 Each of the game’s four modes splits players up into two opposing teams, wherein they’ll have to complete a particular objective. Countdown is a sort of time attack mode where players will have to make sure they pass through various checkpoints to add more time to their team’s timer, while Lockdown has you chasing a moving target, or zone, tasking drivers to stay within the circle to capture it. Switch starts every player on a motorcycle, and each time your ride is wrecked, you’ll be forced to switch to a new vehicle having only three chances to do so. You have to do the same to your opponent, forcing them to use up all of their chances; it’s wreck or be wrecked. Overdrive is probably the best representation of the game with the objective being simply to rack up points by constantly activating your vehicle’s boost and using Rush, which gives you a short burst of super speed once a gauge fills up.

The modes themselves are really fun and I particularly enjoyed Lockdown the most as you’re constantly chasing and fighting off the opposing drivers for control of the zone. Unfortunately teamwork feels almost non-existent at times. Sure, you’ll all be working towards the same objective, but it feels like you’re driving in a silo within the constructs of a cooperative multiplayer match. You never really know how you’re affecting your teammates outside of fulfilling the common objective. Matches are so frantic and fast-paced that I understand it’s hard to properly coordinate, but the idea of actually playing as a team just doesn’t come to fruition. 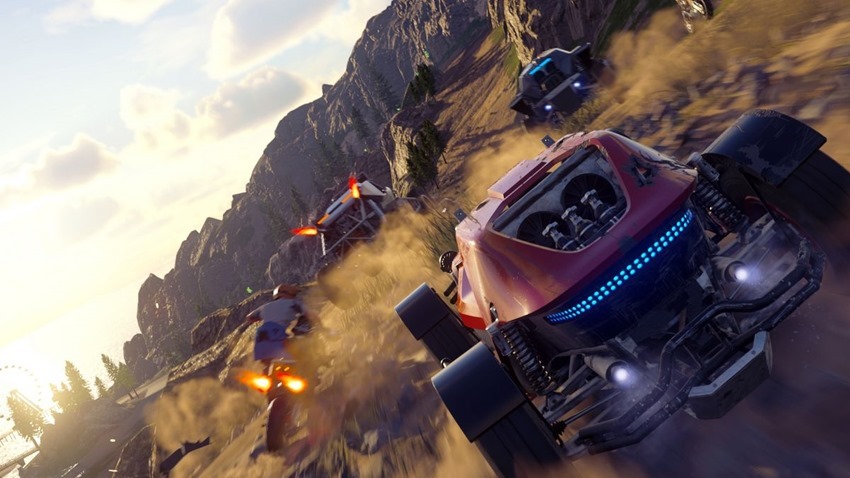 On the actual gameplay and handling side of things, Onrush plays like a dream. Vehicles are responsive and the sheer speed you get when you activate your boost is absolutely exhilarating. Speeding off a ramp to gain some massive airtime only to land on and wreck your opponent is a satisfying feeling I haven’t felt since the Burnout days; it’s so gratifying. The only real gripe I have is when you take down an opponent it cuts to a crash cam, only the game still continues, albeit in slow motion but if you’re on a trajectory to hit a wall or some other obstacle you’ll have no time to perform some last minute evasive manoeuvre as the game takes away all control during this brief period. It’s frustrating when you find yourself going head first into a wall for reasons out of your control. Still, despite that, it’s bucket loads of fun to play. If only it had any sort of staying power.

After a few hours of playing the boredom started to kick in. The single player is just a repetition of the four available modes but with some challenge modifiers. With only a handful of tracks, vehicles and unlockable cosmetics (purchased via in-game currency or loot boxes and not with real-world money), there really isn’t much to do, and once the adrenaline ran out, I was left feeling totally burned out. Thankfully the online matchmaking works brilliantly and it’s quite easy and fast to hop into a quick game. I think the game’s biggest strength lies in its gameplay, and when played in short bursts it’s most definitely an enjoyable experience. 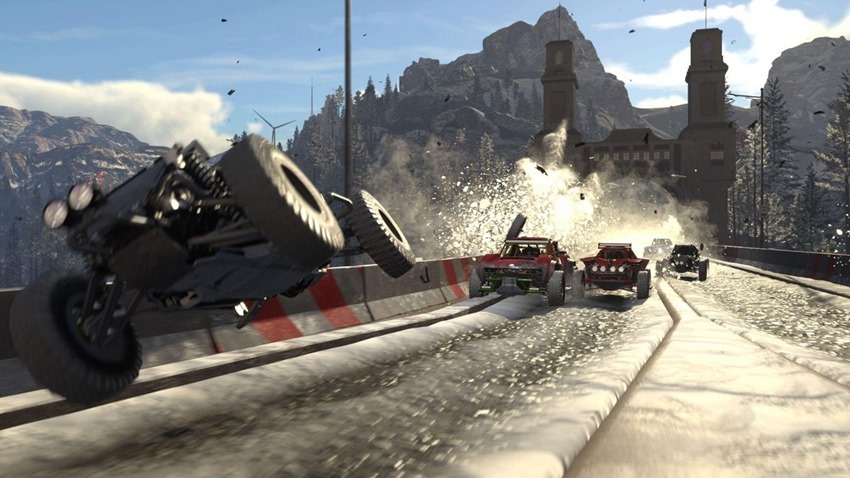 If it’s one thing Onrush absolutely nails then it’s the track layout and design. The sheer scale of the environments is breath-taking and it really gives this game its own unique look and feel. Most impressive however is how you always know where you’re going. It might sound simple, given the fact that it’s nothing more than looping tracks, but there are many branching paths throughout and through its visual design you always feel like you’re organically steered in the right direction even when driving at a blistering fast speed. Not only does this give you the freedom to really go wild and let loose while you’re driving but it also helps maintain that fast-paced flow without ever slowing down. The game’s buttery smooth frame rate is also a huge contributor to its pace. 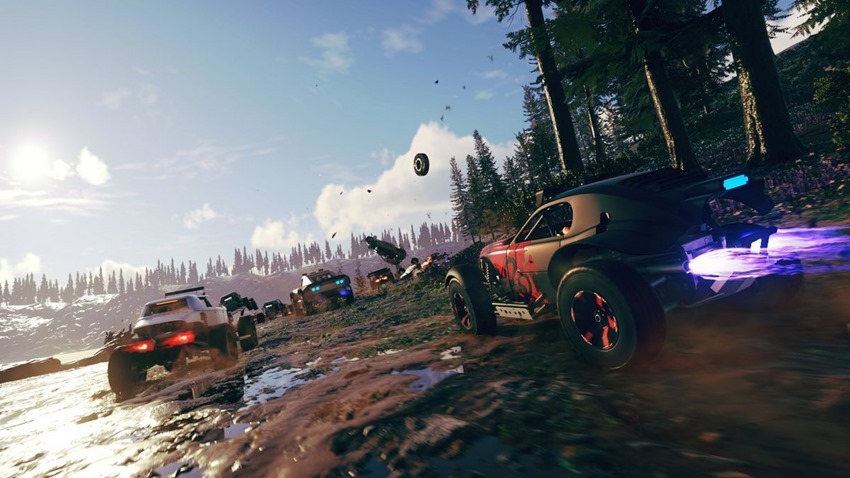 I wanted to love Onrush and the honeymoon period certainly felt like bliss, but it’s iffy focus on teamwork and lack of any meaningful content makes it a really hard sell, especially at full price. There’s a lot of potential here and it does seem like this game will be getting more support down the line, but currently it’s best enjoyed in short bursts.

Onrush is the perfect game to play after a long day at work. It’s fast, it’s fun and somewhat cathartic as well. Unfortunately, the lack of content and a cooperative multiplayer focus that’s never fully realized will leave you rushing to play something else after a few sessions.