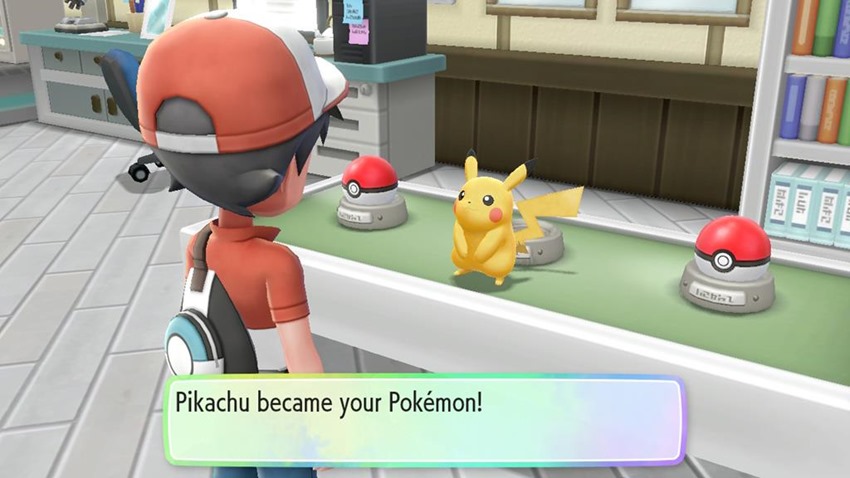 Two decades ago, something magical happened. Nintendo took a gamble on a small studio, greenlit production of an RPG that tapped into a childhood nostalgia for exploration and rolled the dice on the outcome of a game whose primary focus was lightning-quick battles with pocket monsters. Pokémon was born, and it took the world by storm, cementing a legacy as a global phenomenon in the process. 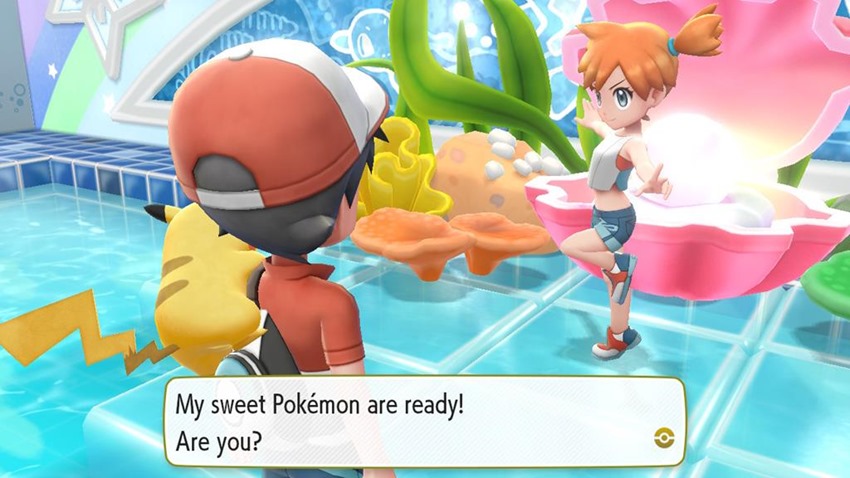 More than twenty years later, with dozens of games, sequels and spin-offs produced, and Pokémon is back to prove that the more things change, the more they stay the same. While the franchise may have begun on Nintendo’s Gameboy platform, the mobile franchise reached magnificent highs through the decades on successor consoles, eventually culminating with the Sun and Moon era that closed the book on the age of the Nintendo 3DS.

So here we are. Pokémon is back, this time on a system which is at home equally on the streets or while you’re under the sheets. A bigger screen, a better bump in visuals and even more toys with which to play with. Pokémon now has the tools to be bigger than ever. The sky is the limit, right? Well, kind of, because Pokémon Let’s Go Pikachu (or Eevee!) isn’t that kind of game. 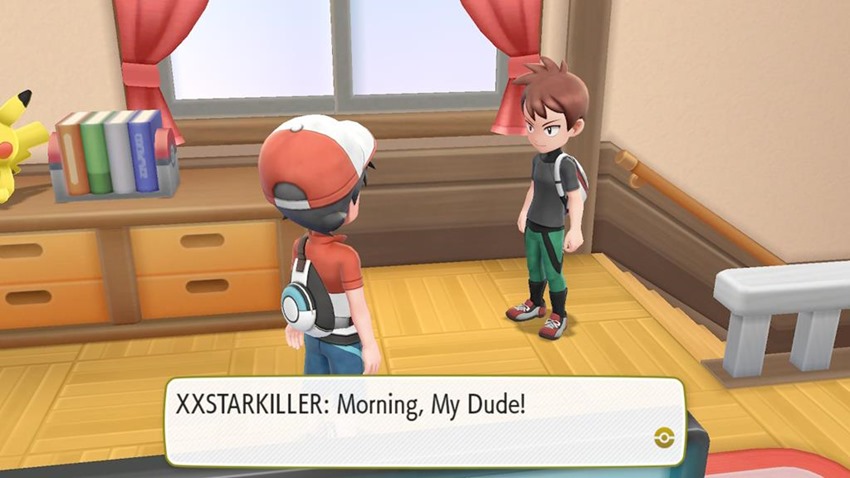 It’s a simpler return to yesteryear, a journey back to the past that brings back the original generation of pocket monsters into a more modern-day age of capture and battling, taking the core game back to its very roots and fine-tuning them along the way. What does that mean for fans both new and old? Simple: Pokémon Let’s Go Pikachu and Eevee is also the most reinvigorating Pokémon game to date.

If you’ve been around the Pokeblock, you know the story by now: You’re a young kid in Pallet Town, given your first Pokémon and tasked with travelling the length and breadth of the Kanto region, collecting new Pokémon for cataloguing, training your team and eventually ending your journey as the top dog of the Pokémon League. 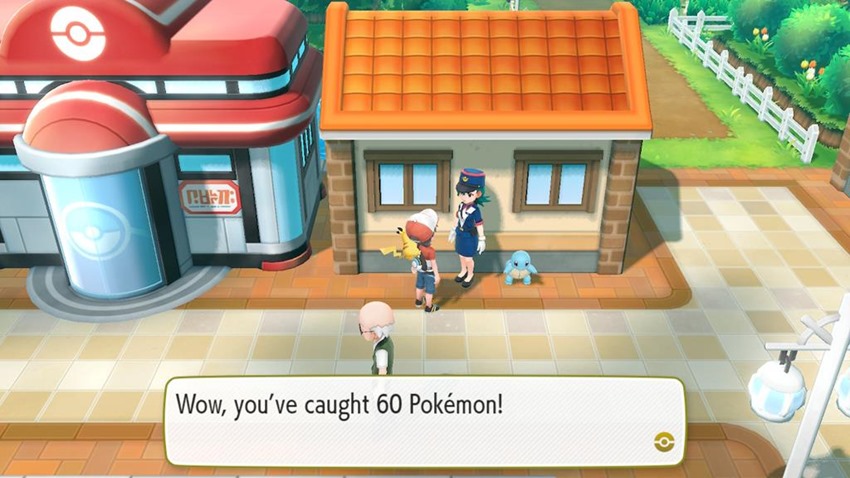 Along the way, there’s adventure, mystery and a run-in with Pokémon poachers such as Team Rocket. Let’s Go Pikachu and Eevee doesn’t stray away from that formula, keeping the story progression of Pokémon Yellow and only retconning certain elements which make sense on a grander scale in the mythology of the series.

There’s still the iconic trek through Mt. Moon. There’s still that showdown in Saffron City’s Silph Co. that ends with a trip back to Lavender Town as you help a restless spirit find peace. Let’s Go Pikachu and Eevee keeps the core adventure perfectly intact, but it’s more meaningful changes can be found underneath the hood of the engine that has powered Pokémon for so many years: Catching all of ‘em. 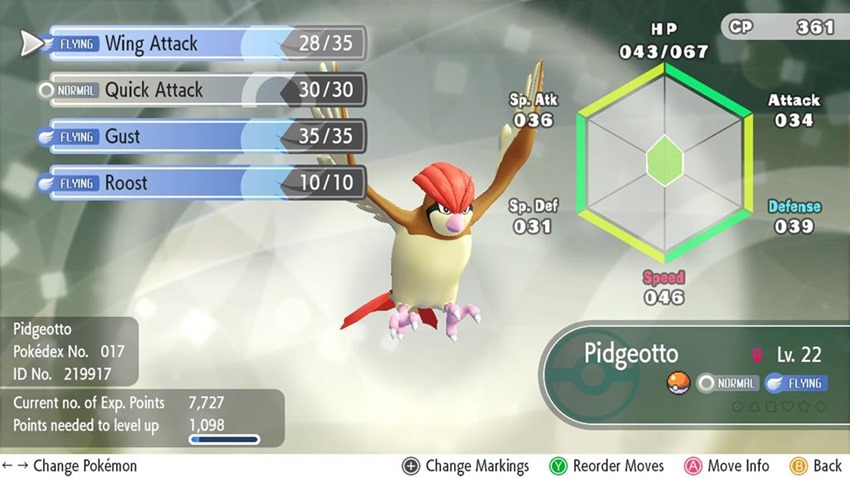 Taking a few pages from the success of Pokémon Go, Let’s Go Pikachu and Eevee completely overhauls a catching mechanic that has barely changed in the two decades since it was introduced. Outside of a handful of occasions, the grind of battling and setting up Pokémon for capture has been entirely removed. Instead, you’re now lobbing poke balls from the start, utilising a mixture of deft coordination and berries to set up a critter in the wild for that perfect toss of the poke ball that leads to the tensest three seconds of your life.

Every successful capture leads to experience for your entire team, multiple successful acquisitions leads to more experience being gained and spare Pokémon can be sent to Professor Oak in exchange for rewards. It’s a remarkable change of pace for longtime fans, one that adds a sophisticated layer of strategy to the oldest tradition in the Pokémon book and finally gives it that much-needed update. 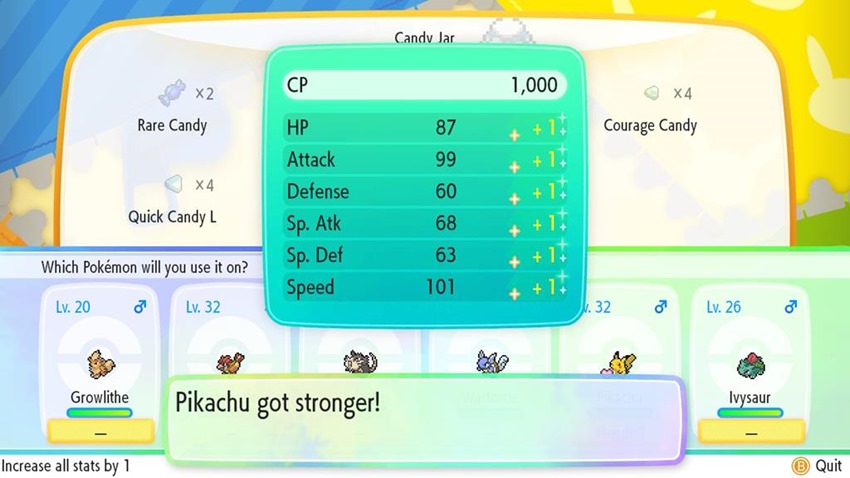 You could argue that there’s an emphasis on quantity over quality, but GameFreak’s adoption of the Pokémon Go mechanics is implemented in a genius way that always feels rewarding. Combined with being able to actually see wild Pokémon instead of randomly blundering into them while you walk through tall grass, and the actual hunt feels more satisfying than ever.

It gets even better, when you make use of a JoyCon or the Poke ball accessory to add some motion to your efforts, further reinforcing that personal sense of satisfaction when you catch a particularly stubborn Pokémon. Zubat dart around the screen, Psyducks regularly bat away at your hunting equipment and Slowbro are deceptively random with their ability to evade you. Pokémon finally feels like the experience that it was always meant to be. 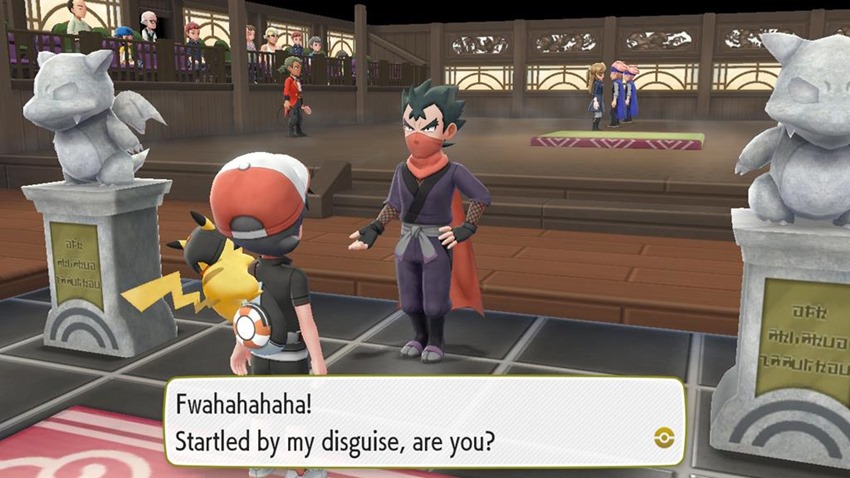 While you won’t be battling wild Pokémon, there’s still plenty of action to be had with fellow trainers and gym leaders around Kanto. Here, Pokémon sticks to its guns: A tight and quick series of one on one encounters (with the occasional tag team), utilising a wider system of Rock-Paper-Scissors to match certain elements against one another and utilise one of four moves specific to your Pokémon so that you can gain the upper hand.

While there’s a separate grind in the catching mechanic, players can still use the fruits of their labour (literally!) to increase the stats of their chosen Pokémon and fine-tune a team of battle-ready friends, easily increasing their stats to powerful new levels. The more Pokémon you catch and mail to Professor Oak, the better the berries you receive and the higher those stats go, all feeding into a delicious Combat Power grind. 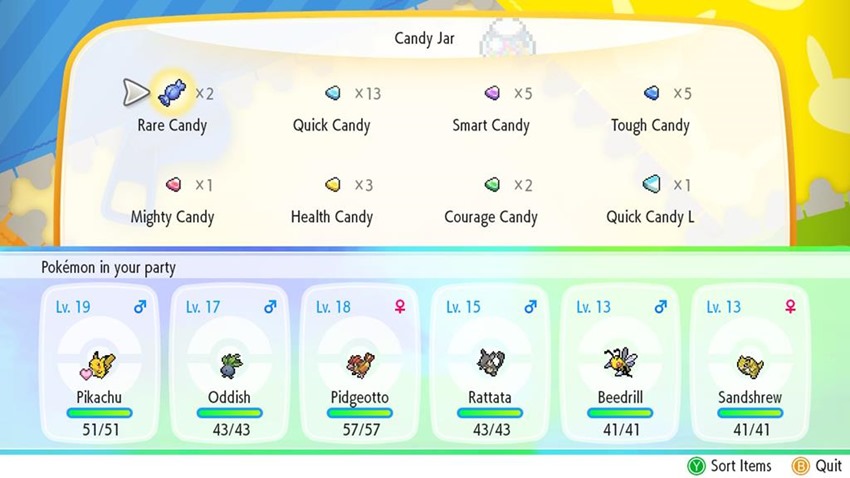 It’s not entirely perfect, as swapping one Pokémon for a lower level pal still means that you’ll be doing a heck of a lot of grinding to get that fella up to spec, but the system itself is intriguing and well worth following up on in future games. Where Pokémon Let’s Go Pikachu and Eevee strangely falls flat however, is in the options given to players who want to experience it either on the go or at home.

Now make no mistake, the mobile version of this particular Pokémon game is the best yet. The visuals benefit from the Switch’s heftier hardware, sprucing up character models and never dropping a frame when you’re playing from beyond the dock. You can even disconnect a single JoyCon, play the entire game with the Switch propped up on its flim-Z stand and have a blast. 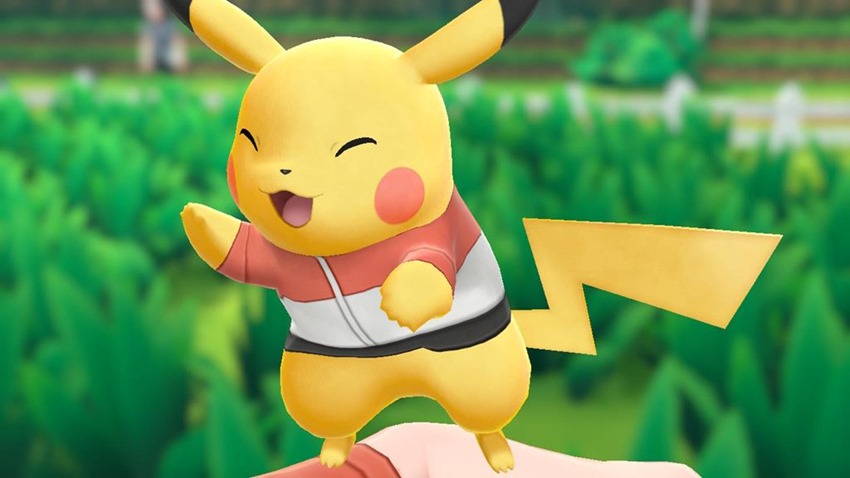 Insert the Switch into its dock however, and the story is entirely different. The game still looks and runs beautifully, but the control scheme is limited to a single JoyCon. There’s no option to use both of them, nor can you activate a Pro Controller and jam around Kanto with a more traditional control scheme. I get where Nintendo is coming from with the docked mode options, but stripping any other form of play from capable devices just feels unnecessarily infuriating and baffling.

Co-operative play could also do with some sprucing up, because while you can rope in a friend to join you on your quest, their actual impact feels almost pointless in the grander scheme of things. The other way to look at this, of course, is that by inviting a younger and less experienced player, you’re also providing them with valuable insight into the core ideas of Pokémon. I’m feeling kind of mixed on this idea, truth be told. 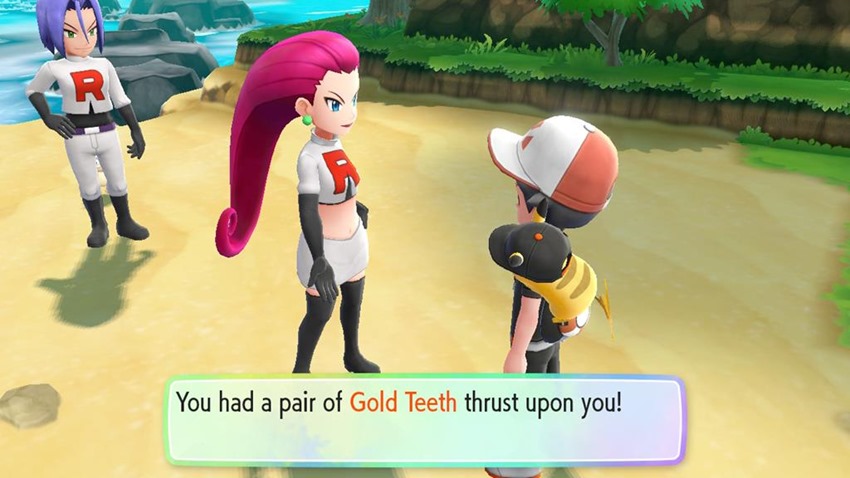 One of the other bigger changes that also tends to be half-baked, is how Pokémon’s infamous PC Box mechanic has now been shifted to your backpack. Tired of having to trek to a Pokémon Center to change Pokémon? Well, now you can do so from anywhere in the game world, albeit with a user interface that is almost as clumsy as Disney’s Goofy. 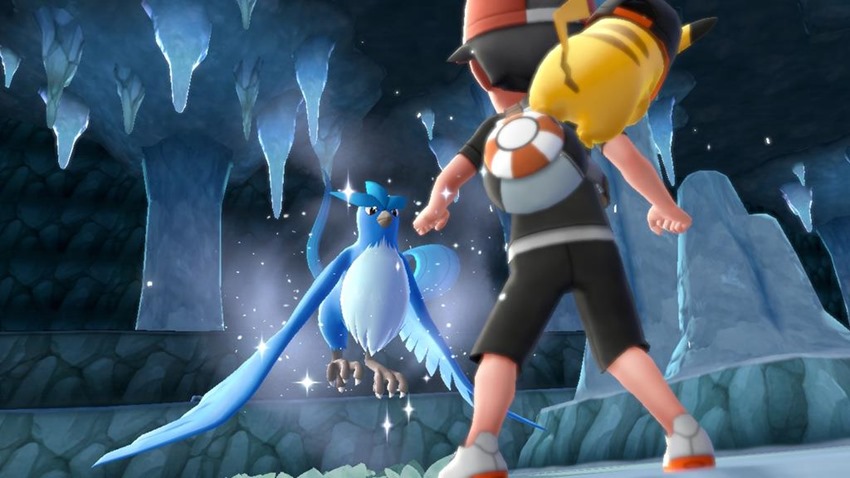 UI issues and controller scheme mishaps aside, Pokémon Let’s Go Pikachu and Eevee felt like a breath of fresh air. By going back to its humble beginnings and reinventing its wheel, Pokémon felt like a nostalgic blast to play, with so many new elements waiting to be explored. The joy of a partner Pokémon who can assist you outside of battle, Pokémon Go functionality and a better catching system are just some of the innovative and much-needed changes for the franchise.