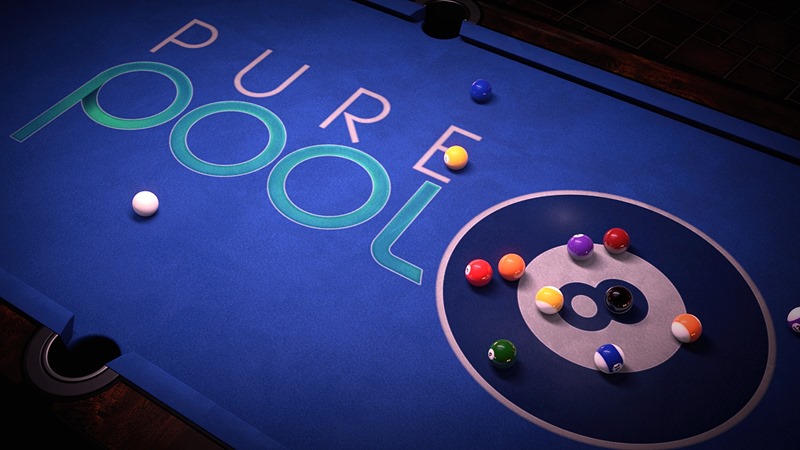 I’ve never been much of a pool hustler. My skill for pocketing balls is laughable at best. I might as well just close my eyes and take a lucky shot, because something is bound to go in! Pure Pool is, yes as the name implies, a game all about pool. I polished my wooden shaft and took to the virtual pub to see what it’s all about.

Upon each launch of the game, you are treated to an open table to mess around on. While I’m no fundi on the table in real life, I’m equally inexperienced virtually. This gave me the chance to learn the ins and outs of the game. Visually, it’s quite a treat. Check out the shine on those balls!

The controls are pretty simple. You can move around the ball much like you’d expect, but applying spin is also easy peasy. While close shots show you your planned projectile path and the possible outcome, long distance has you trying to figure out if you have the perfect angle or not. Thankfully, you can stand up and move around the table just to make sure your Pythagoras calculations are correct. It didn’t take long for me to start potting balls like a professional, at least at close range. 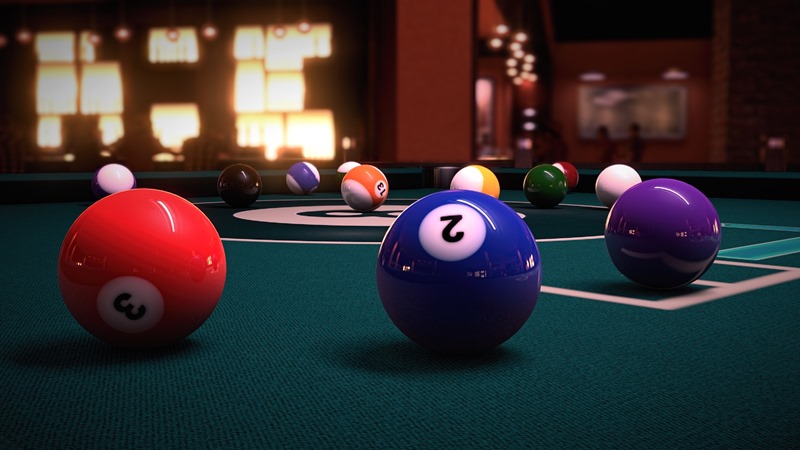 The atmosphere is honestly quite perfect. Moving around the table gives you glimpses of your surroundings. You’re in a very refined establishment which has a number of people enjoying the evening. Strangely enough, nobody is watching you play. It’s just you on your lonesome. At least there is the nice chilled jazz music to keep you company!

After some practice, I decide to kick off my career. I’m going to be the best in the business! I start off right at the bottom in an Amateur US 8-Ball competition. There are some AI bots to beat, as well as some side games to play such as speed pot or perfect potter . While winning each game against an opponent allows you to progress along the career tree, there is also a star system to take into consideration. Each match has 3 objectives to fulfil or goals to beat. The first for example, says I should win the game, win the game without any fouls, and pot a ball further than 160cm from the cue ball. Completing these will give me one star apiece. A certain number of stars is needed to progress to the next tier of the career. Completing a game yields experience which goes towards your account level.

While the objectives mentioned above are quite simple, they soon get to be rather challenging, especially for an amateur like myself. One of my earliest games wanted me to pot 5 balls in corner pockets consecutively. Another wanted me to beat my opponent in less than 130 seconds. While these are certainly achievable, it can be quite an annoyance when you just want to progress along your career, but are held back because you need to play the same opponent again and again just to grab that elusive star (especially if you are prone to OCD). 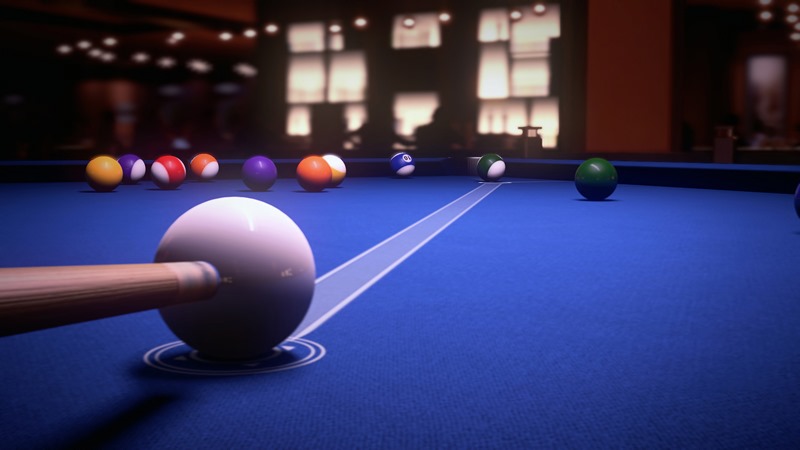 Speaking of opponents, the AI is rather odd. There are games where my opponent came across as incredibly strong, pulling off some insanely precise spin shots to escape even the toughest of situations. Yet the very same opponent would almost blatantly miss what appeared to be an easy shot. While I get that this is needed to make the game fair for a human player, it just comes across as poorly disguised. If the AI is going to pretend to be human, their shots should come across as slightly miscalculated, not calculated disaster.

While the career path is long and will keep players busy for a long time, there is an online option too. I feel that the true strength of the game would lie here, but I was let down. There is no matchmaking function of any kind. Instead, you get to see who is online at any moment. You can then view their profile and decide whether you want to pose a challenge to them or not. I did several times, only to be left hanging forever. Some people may just be online to practice or further their career, which is why the game could really use a matchmaking feature. It would be great if I could just search, find somebody else who is searching too, and have my ass handed to me.

There were times when I did receive a challenge and I was gracious enough to accept. Oh ‘Cyrus9mm’, you think you and your level 35 account can beat me and my level 6? COME AT ME BRO! I was actually putting up quite the fight, at least before my game gave me a black screen and refused to do anything else. I restarted, with no option of resuming the match I had just been kicked out of. 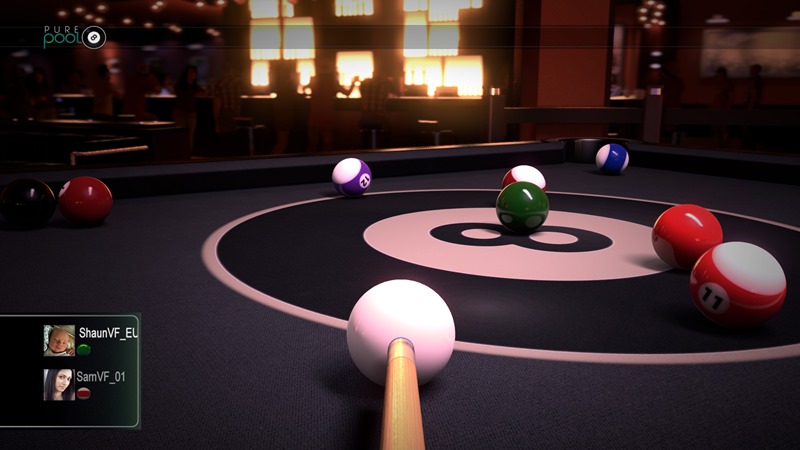 I continued with my career before ‘Cyrus9mm’ challenged me again. This time, we got through 2 games, making the score 1-1. Our third and deciding game was once more cut out by my game going completely black. I guess we will never know who was the better player. I hope the black screen and multiplayer is something they fix and improve in the near future.

Those weren’t the only problems I had with the game. While the visuals are neat, I don’t think they quite justify my PC roaring like a lion just to get any sort of work done. What the heck kind of physics are being calculated behind the scenes? I experienced some severe lag a good few times for no real reason.

I have two monitors, which means I like to run my games in a windowless border so I can move back and forth with ease. The game never had that option, forcing me to either play in windowed mode (at resolutions that just didn’t match my screen at all), or full screen. Yes, full screen is fine, and I should stop being a baby, right? I don’t know if this problem is unique to my set up, but there were dozens of times when I couldn’t move the mouse back and forth to hit the ball, simply because the game failed to register that it was the primary window. Even trying to grab screenshots proved to be fruitless, as the game window just didn’t seem to exist. 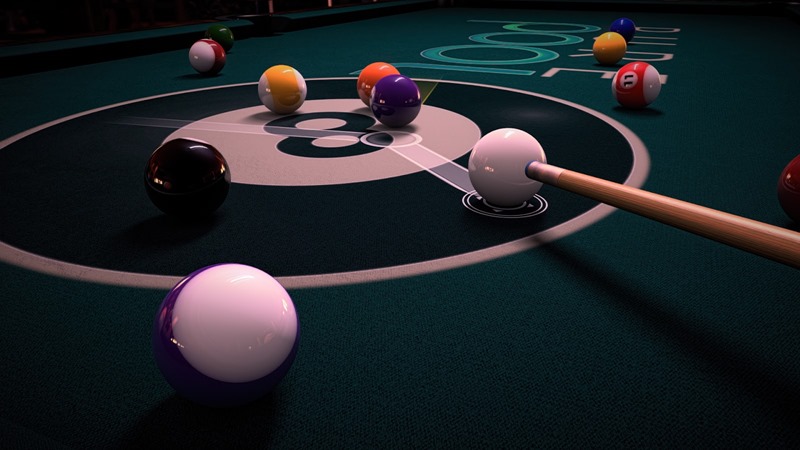 I soon realised that my mouse was in desktop for some reason, and thus, not registering in-game. I canned my secondary screen and switched to one primary, only to have the same problem. If this is an issue that many people are experiencing, it is immensely frustrating. I can’t tell you how many shots I screwed up because the mouse was just not registering when I wanted it to. Playing in windowed mode at an odd resolution though, yielded the best game experience. I could make the most precise of shots, but only as the most miniscule of screen resolutions.