Garden Warfare was a tough one for me. I had never played any of the other games in the series, and this one is totally different gameplay wise from the others in the series. It also brought up the question of reviewing a game that is almost solely an online experience, and whether or not day one server problems should affect the score. Luckily for Popcap, the newest entry into the popular franchise is a solid experience with lots of fun to be had. 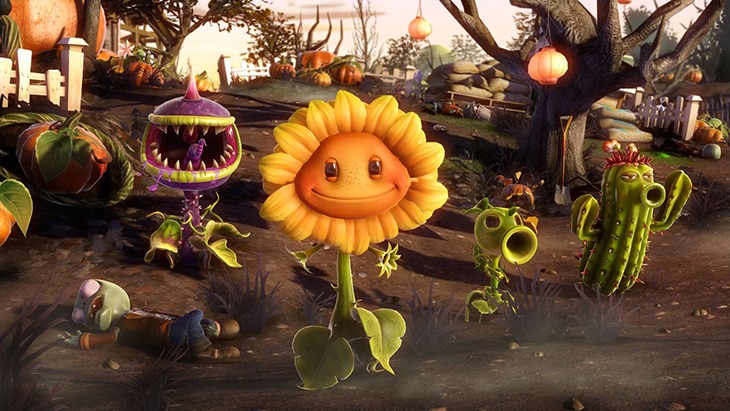 For those completely new to the Plants Vs. Zombies franchise, it was traditionally a 2D, wave based tower defence game where you could upgrade stationary turrets. I’m a big fan of tower defence games, but I was more of a Bloons Tower Defence guy. Garden Warfare aspires to be more than just a tower defence game by giving you direct control of an actual unit which you can move around in 3D space while defending against waves of enemies. This puts Garden Warfare into that weird space of third person tower defence that few games occupy. But I like a new spin on things, so I had high hopes for Garden Warfare. 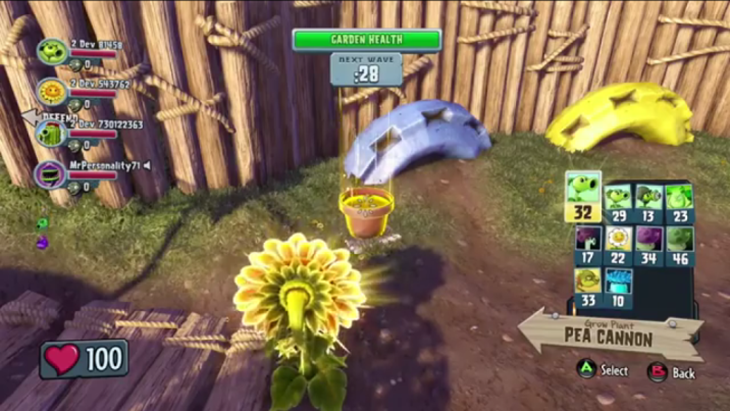 First and foremost, anybody looking for a single player experience will be slightly disappointed. It is an online game that requires you to be online at all times. There is a single player mode where you can battle waves of AI zombies or plants. There’s also an offline split screen mode to play with a friend, which is something a lot of games are missing these days. But that’s only really half the game, and subsequently half the fun. When the multiplayer worked, it was terrific fun. 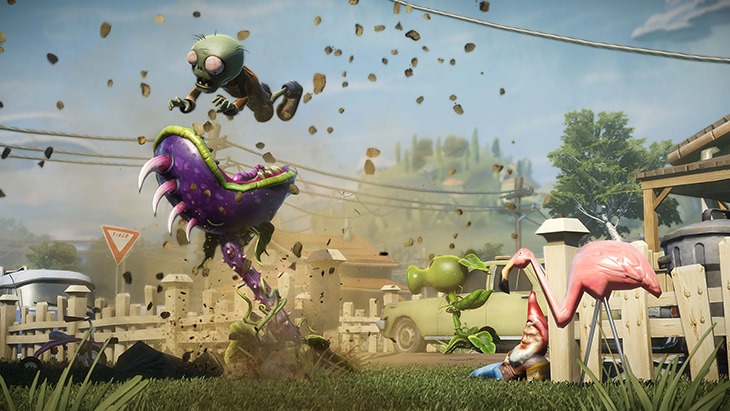 The first thing I will commend Garden Warfare for is its variety in playable characters. There are four different classes for plants and four for zombies. None of them feel similar to play and they all have their own strengths and weaknesses. For example, a Foot Zoldier zombie is your run of the mill infantry with decent mobility and power. The Chomper plant on the other hand lacks mobility and speed, but can dig underground and pop up to attack for massive damage. For the most part, the plants tend to be more defensive in regards to their abilities, while the zombies overpower in numbers and offensive abilities. 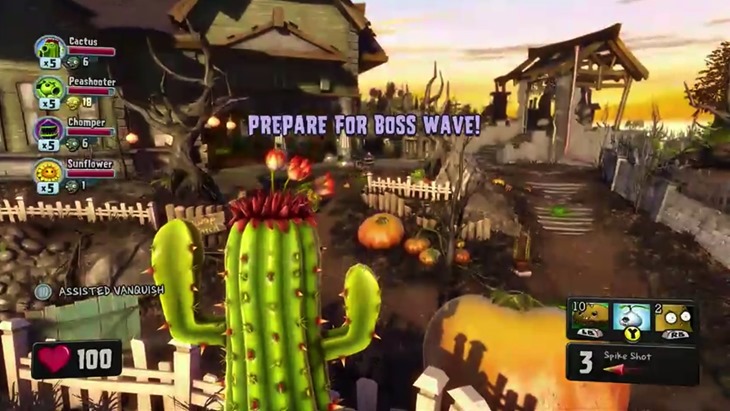 Team Vanquish is a traditional team death match and my preferred way to play. The Tower defence part of the game is less apparent here, as it is easier to just attack the other players rather than spending time using coins to make defensive stationary units. Gardens and Graveyards is an objective based mode where zombies must capture points of the map from the plants team. There’s also Garden Ops which is just a standard ten wave defence from zombies before escaping the map in Crazy Dave’s camper van. This game could have used more game modes to keep it from becoming stale after a while. 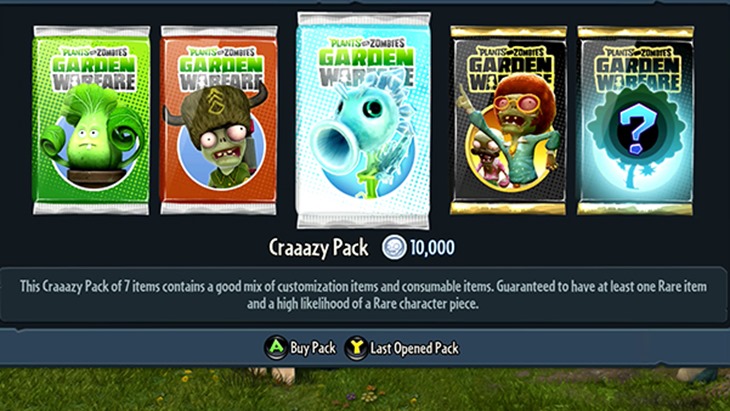 The in game currency are coins, which are collected as you complete specific challenges with different classes. This acts as a nice incentive to try out every character while teaching the player about different aspects of the game. Coins can be used to buy stickers, which come in trading card style booster packs. You pay a certain amount and you’ll get an assortment of random cards, ranging from weapon upgrades, to class character variants. This is where micro transactions would slot in very nicely.

Earning coins and levelling up is a slow process, slower than GTA: Online. But like with GTA: Online, when you see someone that’s really levelled up with a fully customised character, it motivates you to want to progress despite the apparent grind. The lack of micro transactions here is refreshing. 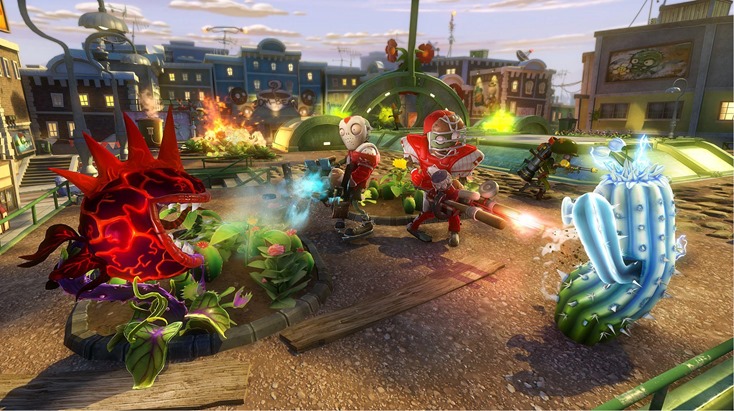 Something that might bring the experience down for some people is the lack of proper balancing for characters. Some classes like the aforementioned Chomper are rather overpowered, and will probably drive you insane. This will likely deter serious players from taking the time to find a viable strategy and playing seriously. But then again, while not being casual, it’s certainly not a super serious shooter, it’s somewhere in between to be enjoyed by all. If you come into Garden Warfare really looking for a balanced and serious competition, you best look elsewhere. But if you come with the mindset of good ol’ fashioned fun in the sort of mindless Earth Defence Force vein, you’ll have a much better time with Garden Warfare.

According to some people I talked to who are fans of the original games, all these character classes are very familiar to them, a lot of them having similar abilities as they did in the older games, which will divide some people about the art style and graphics. As an outsider, the game looks very polished and true to its source material.

Garden Warfare uses the very capable Frostbite Engine effectively here. On the Xbox One, performance remained steady and never strayed from 60fps. The environments are busy and full of surprisingly detailed textures. It still retains the art style of the original PVZ without looking underdone and cheap. This doesn’t look like a web based flash game anymore, it has proper AAA chops now, which is a great thing because while I’m not a huge fan of the art style, it certainly sells its style by cramming the game full of little flourishes.

The worst part of Garden Warfare was temporary, and the reason this review is so late. For a couple of days the multiplayer was simply unplayable in Europe with the server issues. It still shows signs of failure every now and then with long periods of waiting for a match, only to be kicked out and asked to try again. It can also become repetitive, which can be said for many online shooters with limited gameplay elements.

It’s hard to tell if fans of the original games will transition to what is essentially a third person shooter. But I love the new direction Popcap is taking with PVZ, and if I wasn’t a fan before, I certainly am now.