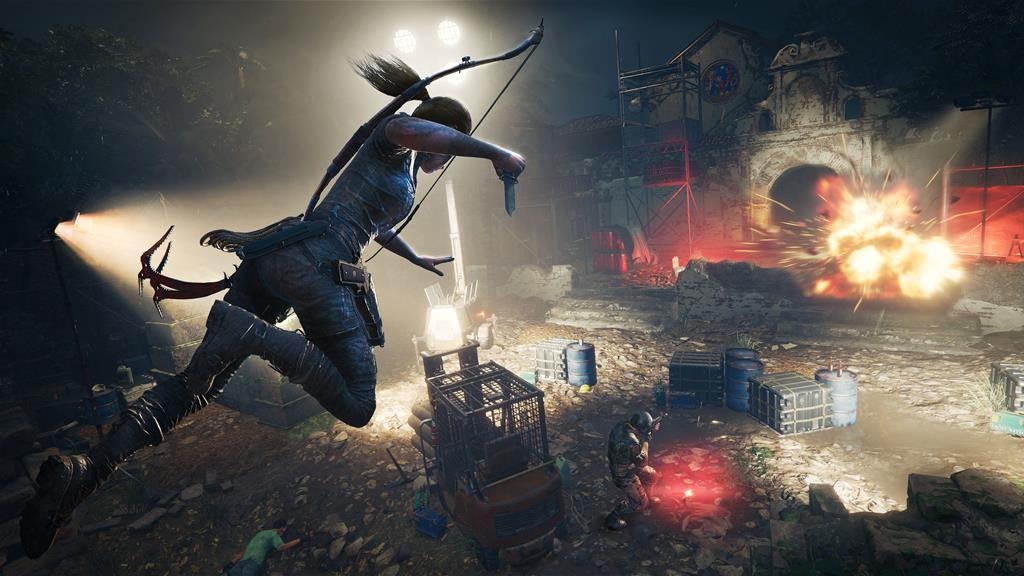 Since Crystal Dynamic’s surprisingly captivating revival of Tomb Raider in 2013, the series has endeavored to continue growing with the competition around it. Rise of the Tomb Raider expanded not only in scope, but gave you larger areas to explore, more secrets to uncover and smart changes to platforming to make it less like an interactive cutscene and more of a robust, polished and extremely engrossing sequel.

Both of which it fails to do in varying degrees. 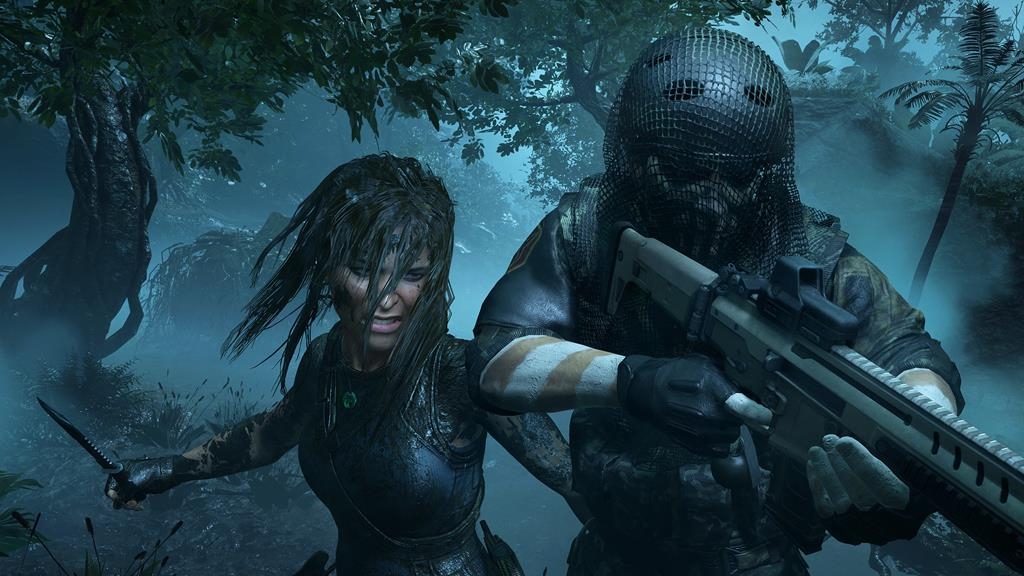 Lara Croft is an extremely unlikeable protagonist in Shadow of the Tomb Raider, which is evident from its action-packed and emotional opening. With greed and the drive to stop Trinity blinding Lara to the consequences of her actions, it’s difficult to side with a selfish individual who brings death and destruction to the cities she visits and plunders. This approach to Lara’s tale is intentional, as Shadow of the Tomb Raider attempts to decompose Lara’s impact on the people around her. But the lack of subtlety in nearly every attempt undercuts the realization she eventually has midway through the tale. Lara shows few moments of empathy and instead relies on those closest to her to reaffirm her actions, without challenging her motives directly. 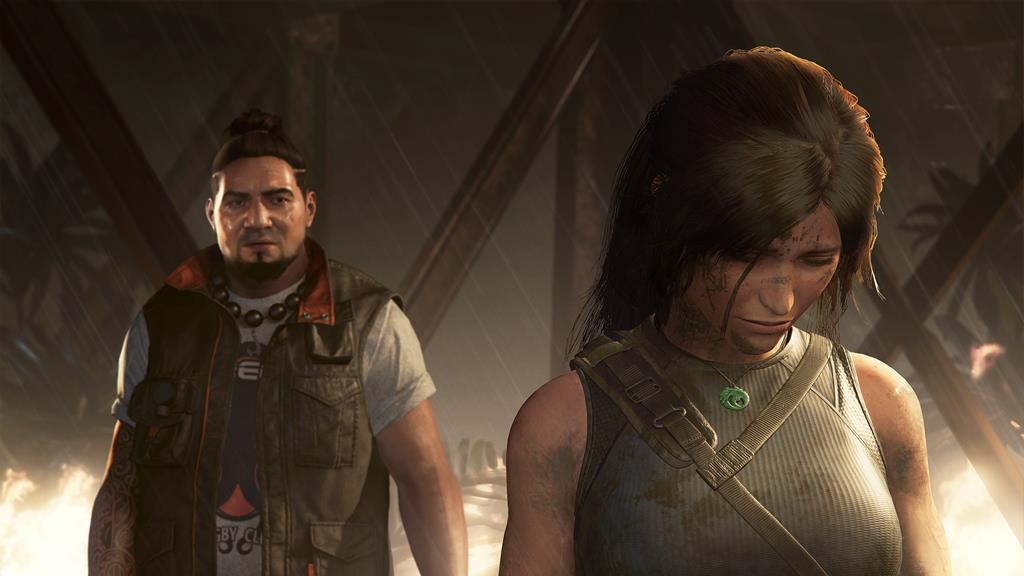 Jonah, Lara’s long-standing friend in this series, is the only one that tries. The interactions between Lara and Jonah are the best within Shadow of the Tomb Raider, with their bond eloquently delivered through some good voice acting and performances. Despite failing to land on the themes Shadow’s writing is attempting to deliver on, their confrontations and tender moments shine through what is an otherwise uneven story across the board. There are few characters that manage to capture your interest for long, while the imposing threat of Trinity dives deep into predictable tropes that rope in Incan, Mayan and Christian mythologies. It’s unfocused at the best of times and underpinned by poor supporting performances and less than stellar animation. 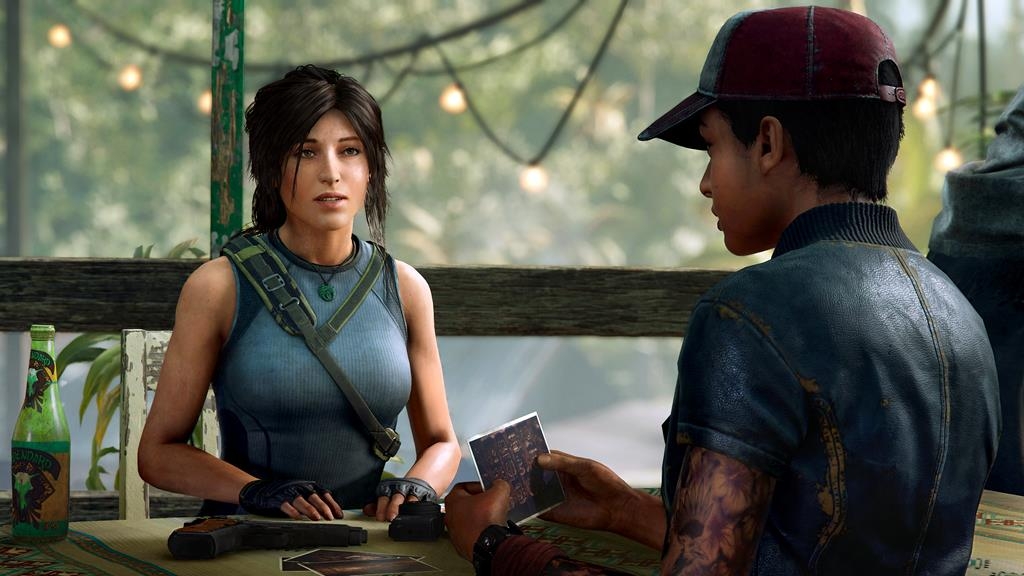 Shadow of the Tomb Raider’s characters rarely react convincingly to the events happening around them, making would-be climatic deaths or story-pivoting twists ineffective and flat. Trinity as an entity doesn’t manage to build any more of an identity than it already had in Rise of the Tomb Raider, boiling down to a paramilitary force with a new mystical side to their motives. With a bit more room to breathe, a good comparison between Trinity’s overall goal and its similarities to Lara’s blind pursuits might have been a compelling connection to explore. Without an effective introspective look at what drives Lara and how destructive her methods are, it settles with just painting her as the undeserving hero in this story, and everyone else is just in her way. 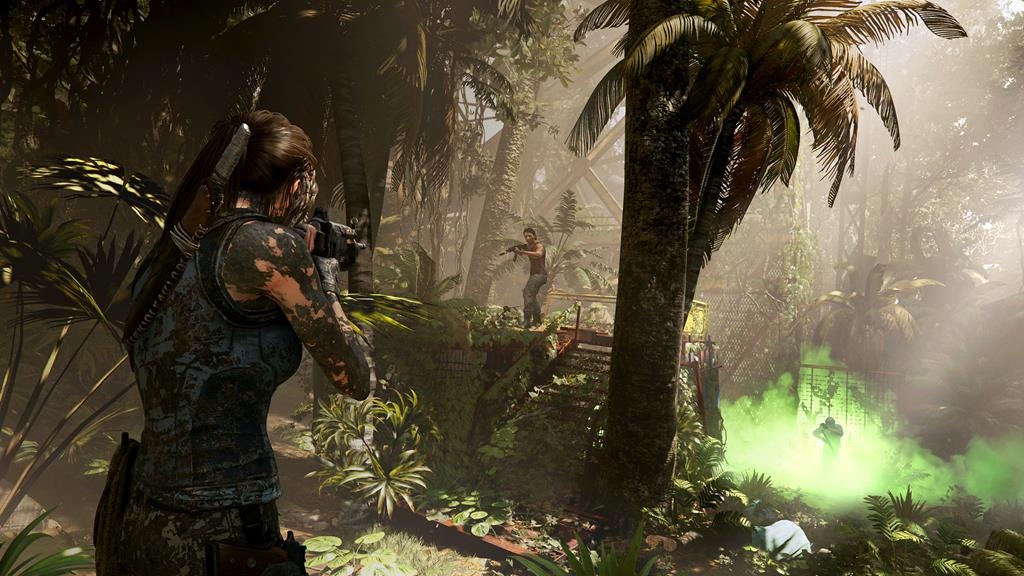 Thankfully, gameplay manages to alleviate the many shortcomings of this disappointing narrative end to the Tomb Raider reborn trilogy. Most of the elements that made Rise of the Tomb Raider so compelling remain just as engrossing here. As Lara you’ll have large hub-worlds to explore, filled with additional side quests, hidden tombs and crypts that hide a plethora of collectible antiques to hunt down. The hubs shift along with the story, which constantly give you more nooks and crannies to investigate as your arsenal of tools and weapons expand to give you access to new areas. While there aren’t always rewards waiting at the end of each tunnel, the journeys toward them are rarely boring. 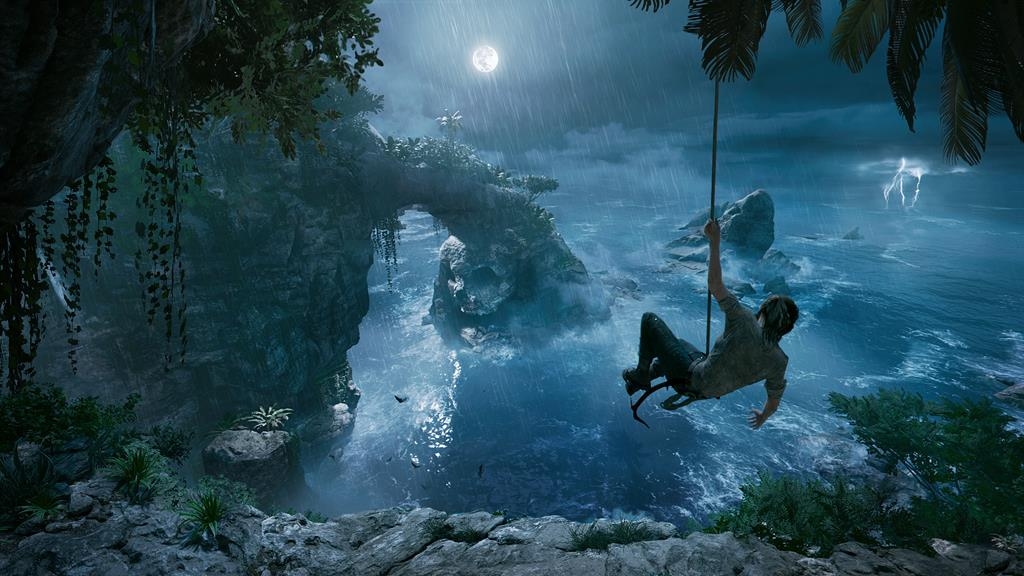 Challenge Tombs are a big part of this, and again a highlight of the entire title. Seeking these optimal puzzle rooms is entertaining, but the varied puzzle mechanics present in each damp, abandoned burial ground offer intriguing ways for you to combine the tools you have and challenge your platforming prowess. None of them are difficult enough to be frustrating, but there’s a good balance struck with tomb that make solutions feel hard-fought and satisfying to solve. Several abilities can only be unlocked via completion of these tombs too, giving you a good reason to stray from the marked path and seek them out at any given opportunity. 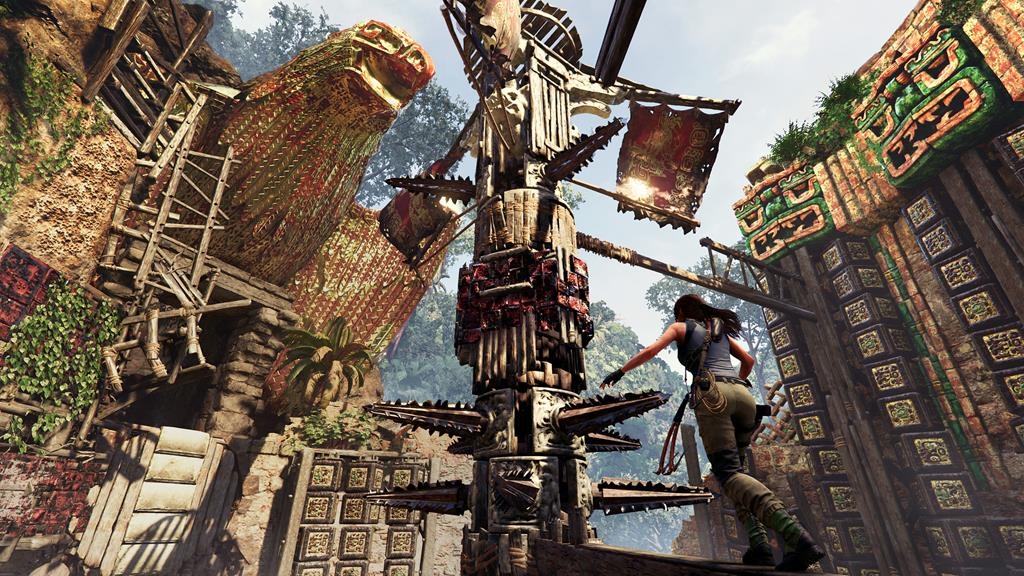 Platforming is a standout again too, giving you even more control over Lara’s movement as she tackles Shadow’s many vertical puzzles. Getting around is more involved than just hitting a button to jump from platform to platform. You’ll have to be aware of when to throw out your climbing axe to swing from an awning separating you and a craggy wall, which will require an additional button press to lodge your axe into it. Stringing together these movements while also expanding on them with some new tools makes for exhilarating movement, which is only hampered by some irritating bugs that lead to untimely deaths. Shadow of the Tomb Raider excels at making you feel like the spelunking legend that Lara is, which only makes extended exploration of its worlds that much more engrossing. 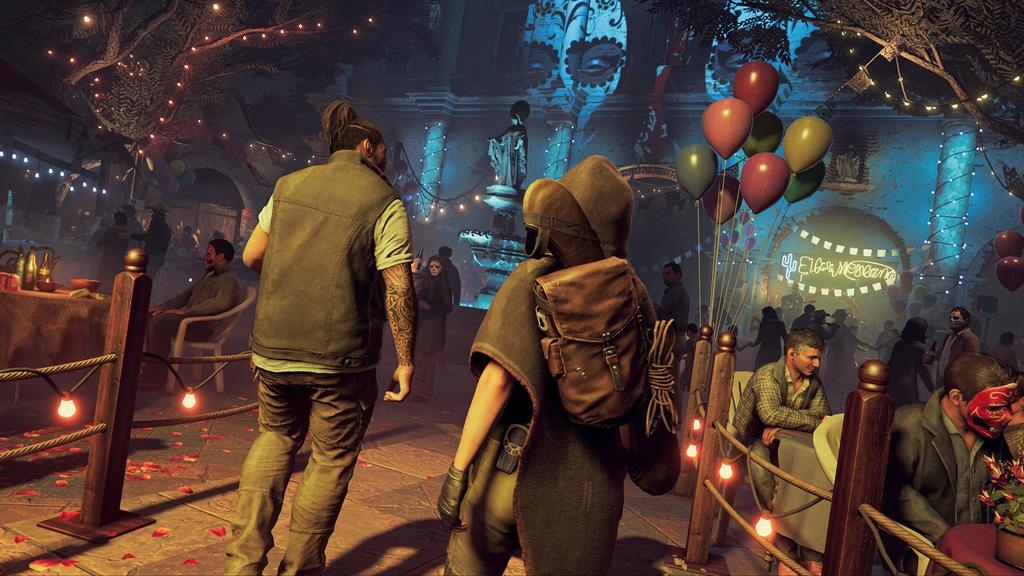 It cannot be understated just how much exploration is helped along by Shadow of the Tomb Raider’s gorgeous presentation. While Rise of the Tomb Raider settled for an entirely different pallet with its snowy mountains and derelict Siberian architecture, Shadow of the Tomb Raider returns Lara to dense jungles and dusty caverns, both of which are extremely well detailed and are illuminated up with some extremely eye-catching lighting. Shadow of the Tomb Raider is a marvelous game to look at, and you’ll probably find yourself trying to catch that perfect angle while hanging for dear life with the game’s included photo mode. Colours pop in warm sunsets while dark caves and old tombs instill a sense of dread with their eerie lighting, making this top-notch visual presentation both varied and well executed at every turn. 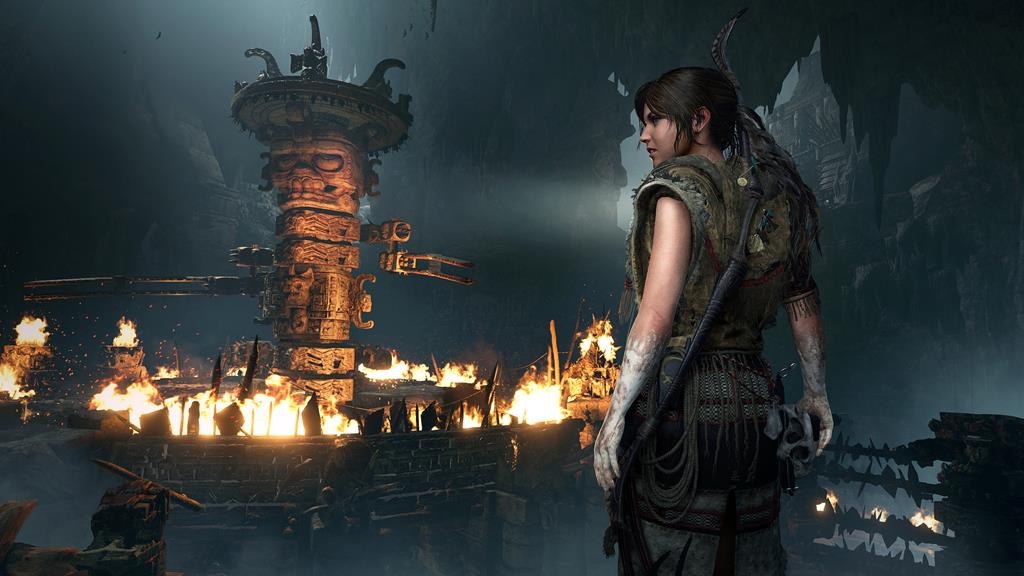 Combat, like platforming, is similarly iterated upon, with Shadow’s big change coming by way of a new stealth system. In past Tomb Raider titles, stealth was entirely binary, meaning enemies would immediately turn on Lara for good should you be spotted. Shadow gives you a little more breathing room, letting you re-engage into stealth play if you manage to break their line of sight when enemies hunting you. It makes you feel like a true predator in the lush jungle environments you’ll mostly be playing in, using walls thick with vegetation to hide in plain sight or high hanging branches to rope up and hang enemies from. It’s satisfying to work through an enemy encounter without being seen, even if Lara’s stealth kills revel in a gratuitous level of violence that seem slightly unnatural for her character. 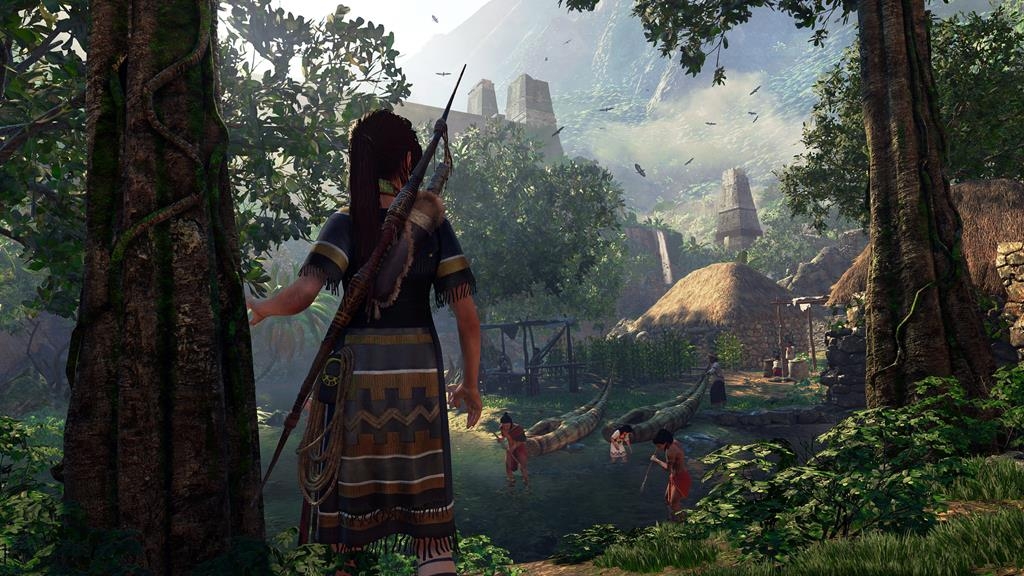 The problem is in its consistency. You can use Survival Instincts (Tomb Raider’s long-standing version of a detective mode) to see when enemies are safe to takedown without alerting anyone else. But you’ll have to rely on this system almost exclusively, given that enemy sight paths don’t typically give you enough information to make the decision yourself. On some occasions, enemies would spot me from large distances away, while other times I could perform kills almost next to another foe without being spotted. There’s a looseness to Shadow of the Tomb Raider’s stealth that makes it feel unreliable to engage with at times, which saps some of the reward away from a perfectly executed run through a camp. 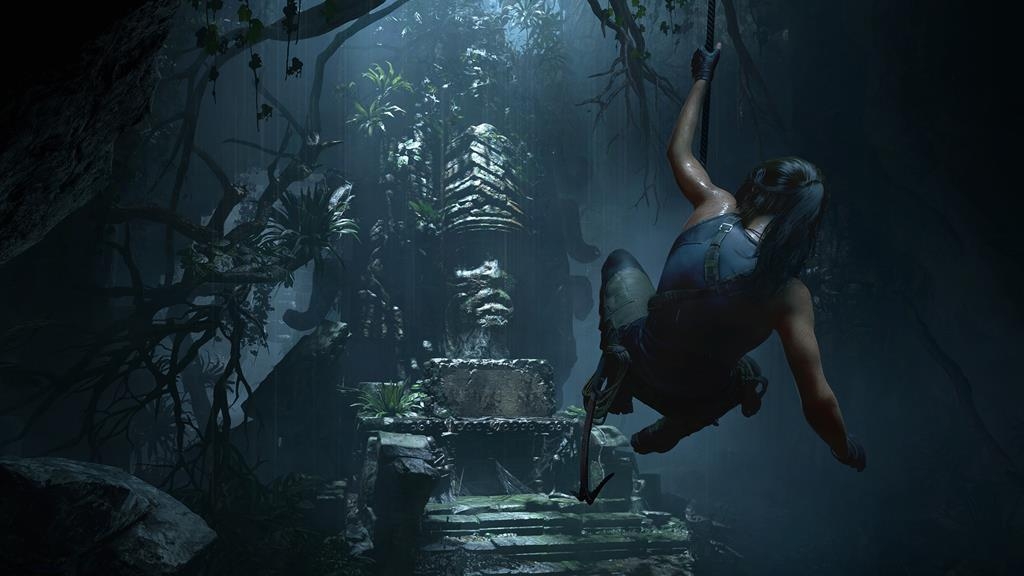 Enemy variety does change things up in meaningful ways though, especially when enemies with thermal vision are introduced to undercut the advantages of hiding places. But all too often, Shadow of the Tomb Raider puts solutions to problems right ahead of the challenge itself. New mud patches allow you to cover Lara to avoid thermal detection, and they’re typically always present right before an area where enemies might otherwise challenge you without it. Stealth is rewarding, but it can also feel far too straight-forward on lower difficulties too. When stealth isn’t an option however, combat falters without having any meaningful improvements over the last iteration. Aiming still feels imprecise and movement through cover too unreliable in difficult firefights, which often takes place in cramped spaces that only exasperate the faults. Sparse open combat areas give you the freedom to flank enemies and use your surroundings to your advantage, but they’re significantly rare to find amongst the numerous small camps and outposts you’ll need to trudge through and struggle with should you be seen. This trilogy hasn’t been defined by it’s compelling combat outside of stealth bow kills and clever enemy circumvention, and Shadow of the Tomb Raider does little to change that. 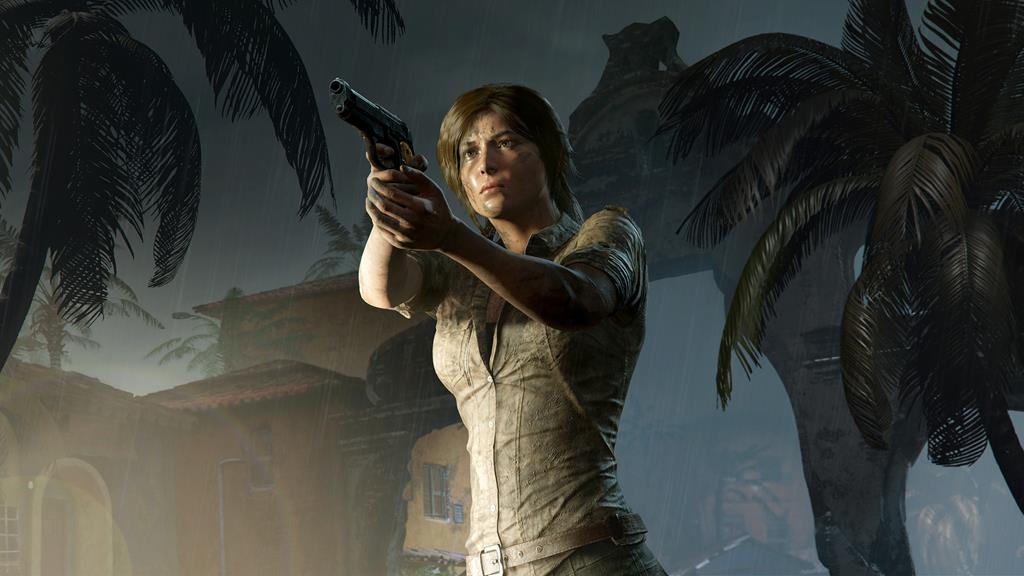 That’s perhaps the largest encompassing problem with Shadow of the Tomb Raider. Despite its strides in the previous sequel, this conclusion to Lara’s returning trilogy fails to make meaningful changes to the arguably well-established formula to avoid a sense of fatigue. When gameplay feels far too familiar it usually tends to rely on a captivating story to pique interest again, but that’s where Shadow of the Tomb Raider falters most. It’s a disappointing and poor attempt at confronting the character Lara has become, with a weak core antagonist and plodding pacing making it the least memorable of Lara’s three new adventures. It’s a story that’s meant to set up the Tomb Raider of legend for the bright future ahead, leaving behind the baggage of her past to let her discover new futures for herself. Instead, it just makes you question where she might go from here, and if there are any ideas left in the well to make her future endeavors any more exciting.