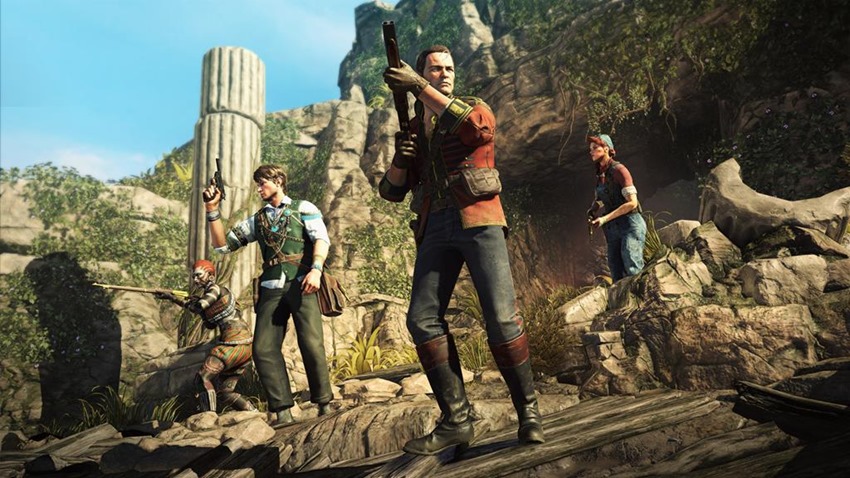 What’s this? Marauding mummies, pilfering pirate spectres and malicious minotaur’s? When history finds itself given a left hook by fiends who don’t play by the Marquess of Queensberry’s rules, there’s only one gang of supernatural sleuths to call on! Men and women with a taste for danger, adventure and knowledge! The Strange Brigade!

If it sounds like I’ve been possessed by the spirit of Roy Dotrice, then there’s a good reason for that. I’ve been consumed by Strange Brigade for the last week, a tongue-in-cheek throwback to squad-based shooters of yesteryear that boasts a touch of nostalgia and rule Britannia themes in its design. It’s an unbelievably British game, not just because of its roots in the UK and developer Rebellion studios, but also for its stiffening of its upper lip when you find yourself dealing with rapscallion revenants on a rampage. 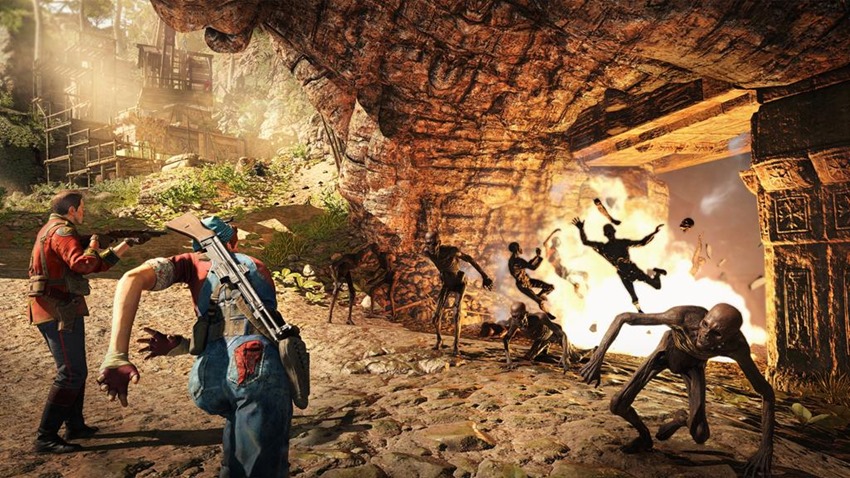 More British than a Basil Fawlty meltdown or heavy-handed health and safety regulations, Strange Brigade wears its heart on its sleeve with its themes. Action is calling, the world needs saving and only a team of crackshots and sharpshooters can put an end to the nefarious schemes of an Egyptian Witch-Queen who wants to raise an army of the dead to conquer the planet with.

At its most basic level, Strange Brigade tasks you with shooting your way through numerous hordes of the walking dead, keeping an eye on your surroundings and using your environment to your advantage. It’s jolly good stuff at its most basic level, a collection of stages that are structured to provide chokepoints with which to funnel the perilous phantasms towards you and large open arenas which you can spring a few traps in for the hordes. Grab a gun that suits your taste, click clack with the bolt-action reload and fire away. Simple, satisfying gunplay, albeit the kind of action that could do with a more generous hit-box system on console as there’s absolutely no margin for error when you take aim. Aim small, miss small and tackle a selection of levels that should take you up to ten hours to blast through.

You’re also able to call on more modern and arcane methods of cutting down the competition, as the Strange Brigade can use explosive munitions to clear a path or suck up the souls of the vanquished to power up their amulets for more devastating supernatural haymakers. Each of the five characters also has a little extra something something, whether it be a devastating one-two punch combo with a Lancashire flavour to it or a talent for getting more buck for your amulet bang when you’re gathering the spirits of the not so dearly departed to aid you in combat. 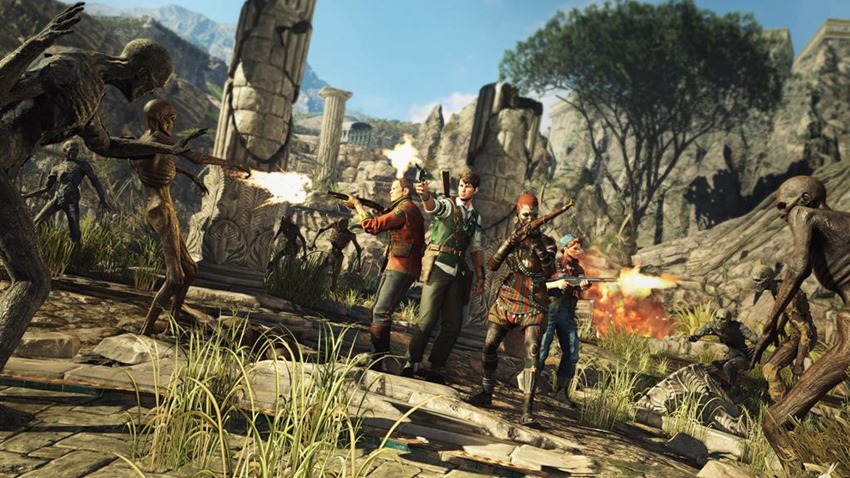 It’s a solid system, one that is bolstered not only by upgrading your weapons with runes but also by purchasing newer weapons with which to take out into the field. The catch here, is that you’ll often find yourself given a chance to grab a temporary power-up with the gold you’ve accumulated through your latest conquest. Do you save it up for that deadly looking submachine gun that you’ve been eyeing, or do you spend some of it on a souped-up random weapon instead? Decisions decisions, Strange Brigade.

It’s a system of action and puzzles that is more than playable if you plan to lone wolf your way through, but Strange Brigade is undoubtedly performing at its finest when you rope in a few friends for an excursion to parts unknown. Friends make for more action-packed thrills, especially when you take the action out of the campaign and into the more blistering Horde and Score attack modes on offer, where teamwork is a necessity. 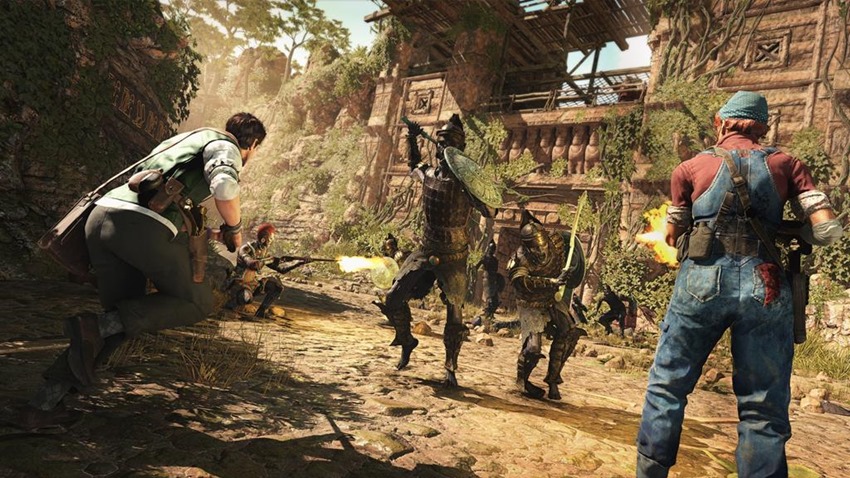 That makes for a brave and competent start…but not entirely thrilling. As much fun as it is to have the omnipresent narrator add some levity to the proceedings, the same can’t be said for the Strange Brigade themselves, as they barely manage to distinguish themselves beyond grumpy sharpshooter, know-it-all bookworm and blue-collar bruises.

Not having a hip-fire option drastically reduces options of dealing with cannibal cadavers and trying to punch your way out of a scrap highlights some jarringly bad animation and hit detection. It makes for a disjointed experience, as Strange Brigade is also perhaps an example of Rebellion at their finest when it comes to level design and enemy variety. 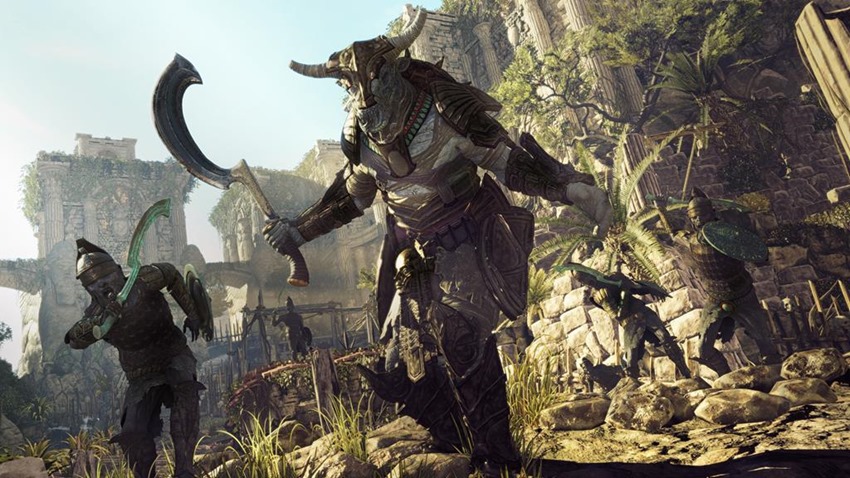 You want to stand still and gawk at the ancient ruins of civilisations that have shuffled off the mortal coil many centuries ago, you want to bask in the sunlight of desert tombs and you sure as hell do want to have eyes in the back of your head when you’re trekking through the long grass of an abandoned village. Likewise, Strange Brigade’s towering titans are more than capable of giving you a run for your marbles, as they range from reckless man-bulls charging at you to gigantic hammer-wielding guardians who can smash you into a puddle of crimson marmalade within seconds. It’s these encounters where Strange Brigade shines, but not hard enough. Perhaps it a game with niche appeal then, a shooter that will still find an audience ready to pump a few dozen hours into its cathartic chaos of squad-based action that has plenty of exemplary charm in its atmosphere, if you’re willing to overlook a few of its more basic offerings. 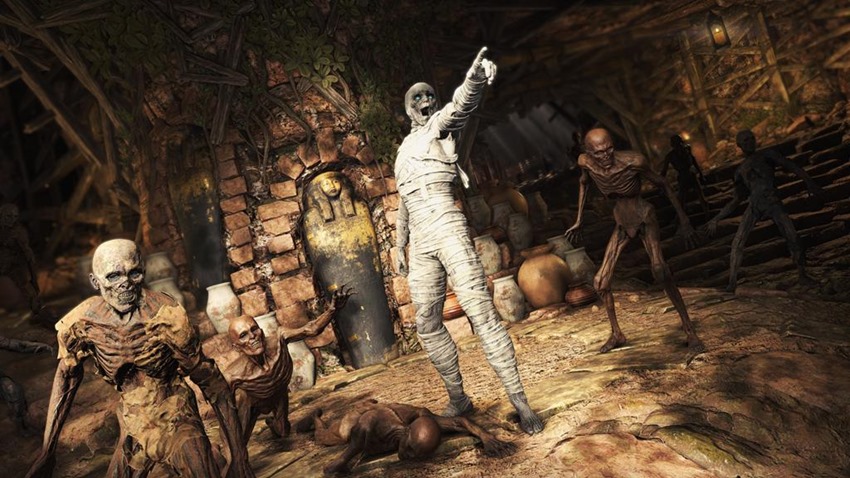 On the other side of the coin, Strange Brigade’s no-nonsense approach to action is straight-forward and reliable content in an age where feature creep has the potential to cripple a game before it even launches. Which these days, does make for a more refreshing experience if you can temper your expectations a smidgen.