Before you read the review of Subnautica, take a moment to digest the following facts about our oceans:

Now, consider all these facts, and translate them into an alien world on which you are trying to survive with nothing but a lifepod and some technology, and you get the foreboding sense of fear and dread that Subnautica creates. 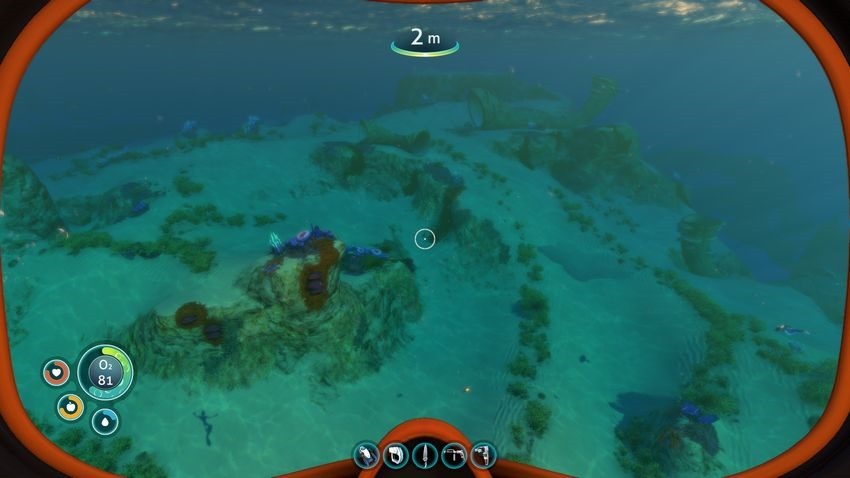 The story so far is that you are a survivor of the spacecraft Aurora that has crash landed on an alien planet known as Planet 4546B. More than 90% of the planet is covered in an ocean, and all you have, at least in the beginning, is an AI voice in your ear providing you with tidbits of information and observations, a lifepod that itself is damaged, a fabricator (i.e. a 3D printer), a First Aid dispenser, a storage container, a radio on which you receive transmissions, and basic diving gear.

Your initial concern is to figure out what marine life you can consume to sustain your food and water levels, and which creatures you need to avoid for now if you value your life. After you have figured this out, your next job is to begin exploring the surrounding area of your drop site to find resources from which you can make basic survival tools before you can consider venturing further away from your lifepod. To add to your worries, don’t forget that you are only human, so you can stay underwater for brief periods before you have to return to your lifepod (or aquatic vehicle) or surface to refill your oxygen levels. 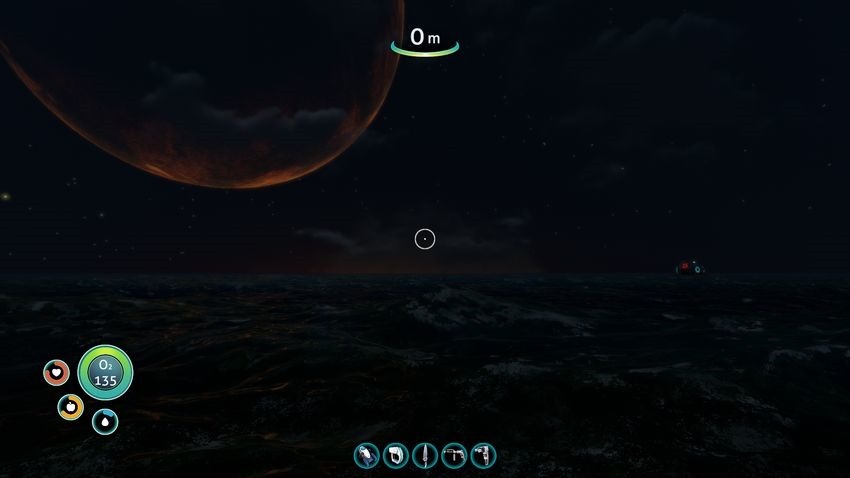 These constant concerns, and the fact that you know practically nothing about the fauna and flora of the planet can make for some tense survival and adventuring moments. There is some reprieve though in that, at least in the shallows where you start, the marine life and landscape are quite beautiful and tropical – a place in which you would be happy to spend a hard-earned holiday scuba diving – so the sights and sounds are, initially, quite enjoyable.

This is until you start adventuring further out, something you’ll have to eventually do if you wish to survive, and ultimately, find a way off this planet. Scattered across the ocean floor at different depths and locations is the wreckage of you spacecraft, which provides you with item fragments that need to be scanned for vital blueprints, resources that can be converted into usable material, and some consumables. All the while, you are still keeping a watchful eye on your oxygen levels, and constantly hunting for sustenance to keep your heart beating. Eventually you build equipment that will make your adventuring safer and more bearable, and you will discover blueprints that you can used in establishing a base, and yes, you construct bases below the waves.

These can be sprawling constructs or small hovels that offer the bare necessities. All of this is built from material you salvage, harvest and collect across the ocean. Most of your items and equipment are constructed or manufactured from minerals, corals, flora, seeds and spores. These materials can also be converted into more advanced materials to create more complex items. At the same time, when building your base, you also have to consider its hull integrity. Just as on earth, water exerts pressure in the game, so a low hull integrity will lead to your base flooding, and constant repairs being needed. 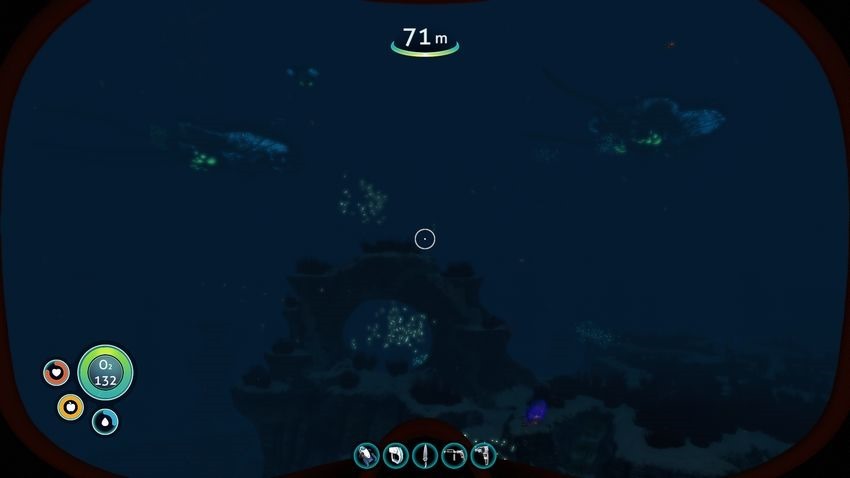 Thus, as you construct your base, or do any alterations that may undermine its structural integrity, you need to keep a close eye on the hull integrity if you wish to avoid swimming indoors. This bit of reality adds to the many survival decisions you need to make to survive this alien world, and creates an experience that mirrors reality to an extent.

The gameworld itself is divided into about 36 different explorable biomes, across shallows, the deep, caves, and a few land masses, each with their own landscape, flora and fauna. This is an alien world, so you will also come across alien ruins as well. This is where the beauty of the game comes into its own, both in terms of artistic appeal and game mechanics. Blueprints provide the means by which you can make items that can enhance and improve your survivability or improve the cosmetics of your base, and while you start with the basic blueprints, discovering other blueprints requires exploration in the different biomes for fragments of these items, which are scanned for the corresponding blueprints. 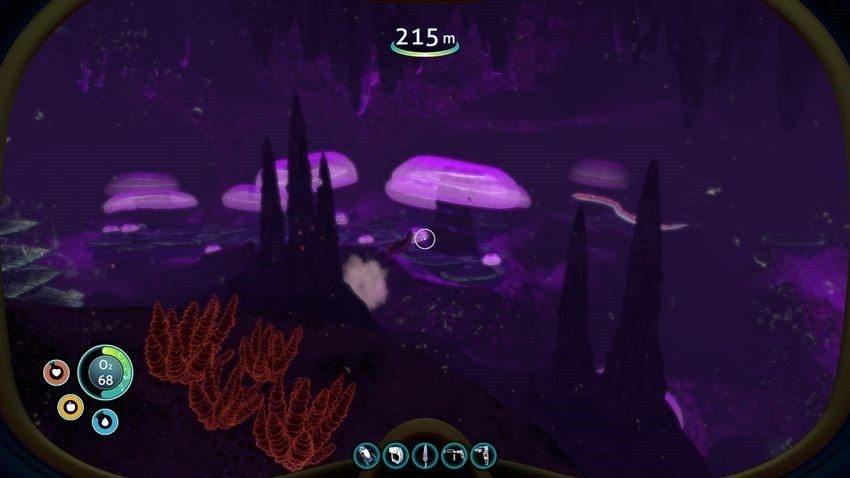 As you venture out into biomes that are situated further from your lifepod, you start gaining access to other blueprints that may not be found in other biomes, but of course, these biomes also contain marine life that wants to end your existence. Due to the expanse of some biomes and few distinguishable landmarks, becoming disoriented and losing your life is a very real possibility as well without ready access to water, food, oxygen and equipment that is designed to help you survive in these biomes.

Now you have to start weighing up the risk vs. reward scenario. Should you venture further away from your lifepod into a vast ocean with your limited equipment and resources to get the nice stuff, you risk drowning, being devoured by marine life or losing your way in the expanse. Building up your equipment and resources to sustain you and give you the requisite tools to fight anything that pops out of the murkiness once you do venture out becomes necessary. Let me tell you, if you think the Blue Whale on earth is big – wait until you see what Subnautica’s ocean holds, and they do have a taste for human flesh. 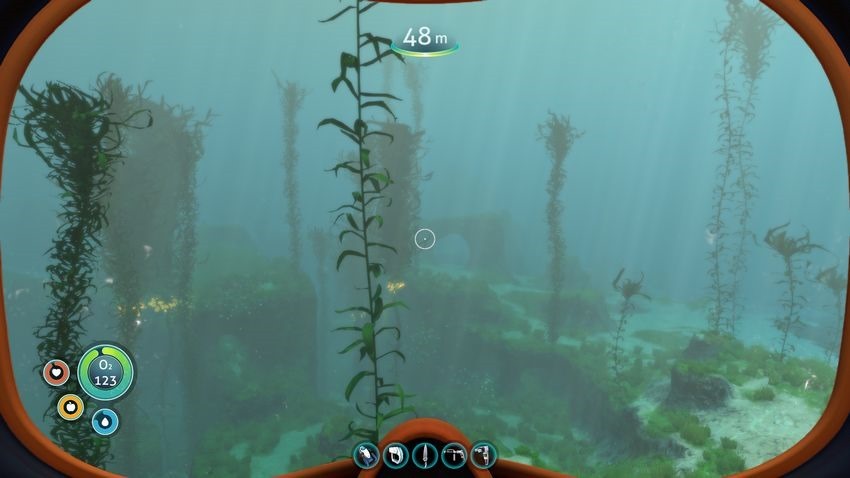 Survival games are a dime-a-dozen, so to embroil oneself in a title that takes a fresh approach to the genre is fulfilling. The game may not be as expansive as ARK: Survival Evolved, or have such a rich lore to work from as Conan Exiles, but what it does do is create feelings in the player you would normally experience. In the real world, try swimming to the end of a continental shelf in the sea, and look out into the expanse of the ocean, and there is a strong possibility you will get a sense of fear and dread of the unknown.

Subnautica provides such strong feelings, and when you see that eerie, lonesome, ghost-like shape circling in the yonder murkiness of the ocean, and hear that dreadful moan through your headphones, you too may experience that stomach-churning fear, knowing that you will eventually have to venture out there if you plan to leave this world. 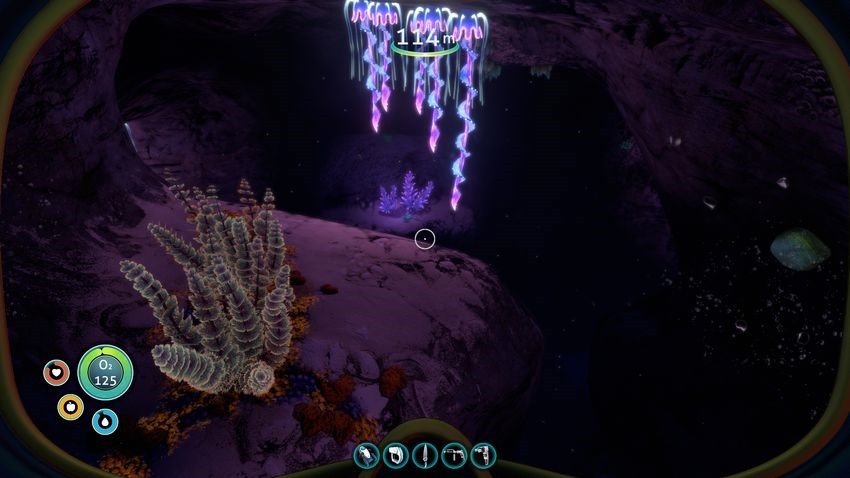 This is what Subnautica offers that few other survival games can.

Subnautica sets itself apart from other survival games with its setting and its manipulation of what drives real fear in us. When venturing into one of the biomes, the AI voice states that the location, “matched 7 of the 9 preconditions for stimulating terror in humans”, and that, in a nutshell, sums up the game – it manipulates certain innate fears in the player.