So Titanfall landed on the 14th of March 2014 in every single gaming country on the planet other than South Africa. Blame our networks, blame the Consumer Protection Act, blame the lack of a local Azure datacentre – either way, EA felt it was in their best interests not to release the game here.

However all is not lost as our friends at Evopoints are selling Titanfall codes and the game definitely works locally,  so there are tons of locals online for you to go head to head with. So we grabbed a code and spent a couple of hours with this multiplayer-only title.

Being multiplayer-only makes it a bit tough to review as you never know when you’ve played enough to review it –   but I feel I know enough about the game to give a fair review now and while some parts are absolutely amazing, I am unfortunately surprised by some of its downfalls. 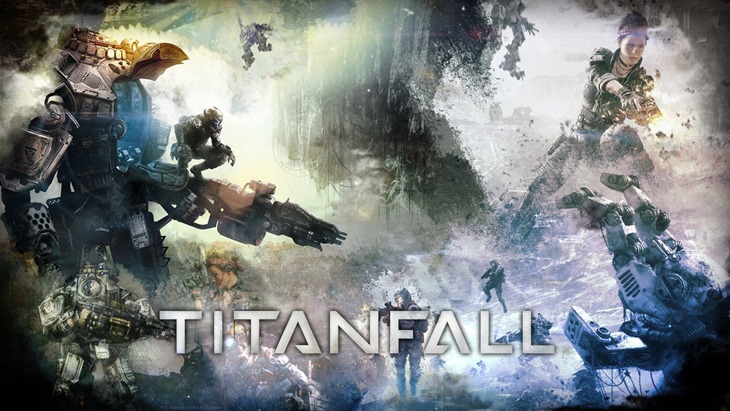 Titanfall is quite original in the fact that while the game is entirely an online multiplayer experience they have also included a campaign mode. In fact there are two campaigns you are required to play through. The IMC and Militia each have their own campaign and you can’t customise all your Titans properly until you have completed both of them.

The problem is the campaigns just feel like forced multiplayer matches. Yes there is a story but since you are playing against real people you can’t take the time to enjoy the story and so most of it is entirely missed. What kills me here is that the world of Titanfall is incredible. The rich lore, locales and characters who make up the game are primed for an incredible single player experience and the lack of one is absolutely baffling to me.

If you aren’t a fan of online multiplayer then start running from Titanfall now, as that’s all that it offers. 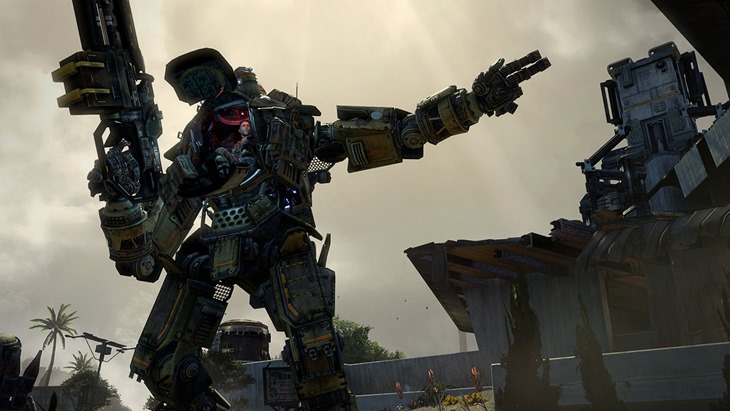 South Africa, or in fact Africa, doesn’t have an Azure datacentre which means that our pings are pretty terrible to the nearest European servers. I haven’t seen my 10mb Afrihost line drop under 200ms once, but then again I haven’t seen it go over 220ms so at least it is stable.

If you are looking for close up, twitch fighting you are going to get destroyed, so the game isn’t suitable for competitive gaming from a South African standpoint.  That doesn’t mean that the online experience isn’t enjoyable, however.  The way the game handles the lag is truly incredible. I’ve even been able to win rounds and I can generally place in the top half of the table so the game is definitely playable with our terrible networks and lack of servers.

The game itself is pretty straight forward, yet it’s wildly complex at the same time. It’s a 6v6 game but you are also joined by numerous robotic grunts in the game so it feels like the game is jam-packed with people. The AI are split between different classes and in general are pretty stupid and easy to take down. That should be a bad thing but in reality it makes it a lot of fun for everyone as even the worst players will enjoy taking out the grunts and then panicking when a human pilot comes leaping over a wall or running along a building towards them. 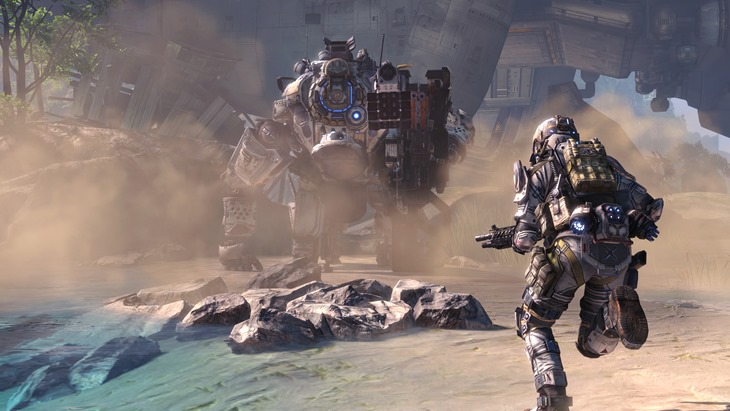 Yes jetpack-enabled free running, or parkour, is a huge part of the game and truly brings that childhood delight back to gaming, The fact that it is quicker to run along the walls and jump across a tunnel means you run faster than the crow flies is both ludicrous and exhilarating at the same time. Being able to climb a 4 story building at lightning speed and then raining fire down on a hulking titan is one of the most exciting gaming experiences I’ve had in years.

Finally a game has arrived that gets rid of this realistic nonsense and takes us back to the age of escapism that truly defined gaming for me. Who cares that you can’t really fall 4 stories and not get hurt, as long as the bullets work and I feel like I’m benefiting my side then I’m happy.

Titanfall has a multitude of game modes and even more impressively it has a multiplayer mode that switches between them as a core mode. It’s my go-to mode every time and it lets me experience Capture the Flag, Attrition (Deathmatch), Last Titan Standing (everyone starts in titans), Pilot Hunter and Hardpoint.

My personal favourites are Attrition and Last Titan Standing because I’m not entirely terrible at them. Hardpoint, which isn’t dissimilar from Annex and other king-of-the-hill gametypes,  is a ton of fun and forces the action into tight spaces which is always a good idea. Capture the flag and Pilot Hunter, however,  usually just devolve into a bit of a boring back-and-forth.

Overall,  the game’s weapons, movement, options and experience are absolutely amazing. Respawn have revived the online shooter experience and if the next Call of Duty or Battlefield doesn’t take at least a few cues from the free running nature of Titanfall they may start to become obsolete.

But. there’s always a but, isn’t there? 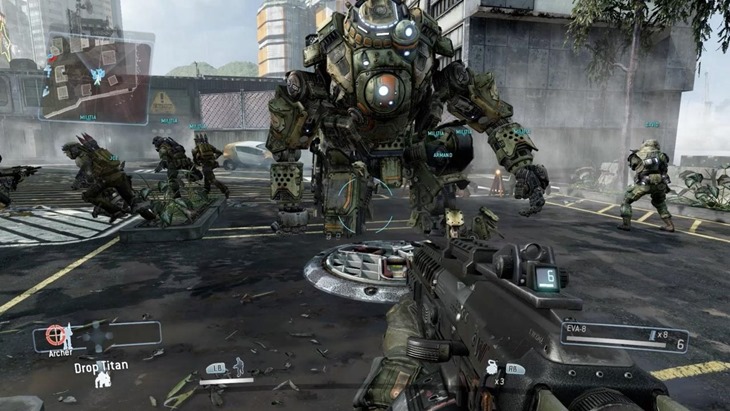 The Titanfall that I played at Gamescom last year was perfect. I was expecting top marks from most outlets when it was released and to be entirely fair the game plays just as well as it did then. The problem however is that there isn’t really much more to the basic “deathmatch” experience.

The lack of a real single player campaign is a glaring issue and one that makes paying full price for the game feel like I’m being ripped off. Everyone is quick to point at Call of Duty’s copy and paste routine but their single player experience is always enjoyable, in the same way that Hollywood action blockbusters are enjoyable.  On top of that, Call of Duty’s superfluous gameplay modes, like Zombies, Special Ops or Extinction are usually fun, extra-value diversions. Titanfall only has multiplayer. Is that enough for a full priced game?

Another thing I felt like it was missing was the idea of killstreaks or some sort of reward for chaining together multiple kills.

Yes you get burn cards which you choose before the game that allow you to swap out your main weapon for another, more powerful one, or to give you unlimited grenades or fast movement. These are a nice tactical addition to the game but I never really felt they offered me that much of an advantage.

In one round I killed 8 pilots in a row and felt I deserved some reward for that but none was forthcoming. Yes, there timed “core” upgrades to your titan if you stay alive long enough, but some real sort of reward system would be nice.  You have challenges to fulfil that unlock new weapons, accessories and effects but it feels a little useless as the best weapons are arguably available straight-away.

But probably the biggest issue right now for an online only multiplayer title is the inability to have private lobbies. We’ve got more than 12 people here who want to play against each other so why can’t we create our own lobby and let everyone join? The fact that this is missing blows my mind and really hurts the longevity of the game for more casual gamers. 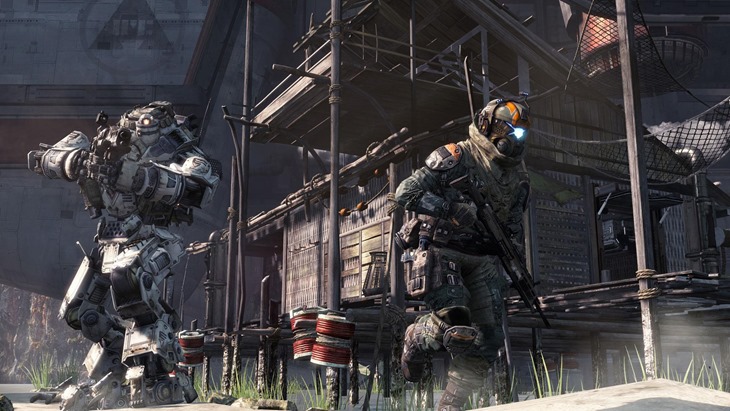 So far it sounds like all I have are complaints which couldn’t be further from the truth. The free running ability is incredible and terribly addictive. You can’t understand the impact it makes on the game until you try it yourself. Yes, Brink tried something similar but it was underdeveloped, and didn’t feel right. I felt like Altair with a machine gun and really who could ask for more?

The idea that you get a primary weapon, a side weapon AND an anti Titan weapon is great. I never felt terrified about facing off against Titans and in fact I would generally head towards one if I saw it. A few pilots taking on a Titan together can easily overpower the hulking machine beast. However one on one and that pilot is going to see his insides outside very soon. As I mentioned before the way the game handles lag is incredible and while it is still noticeable I can definitely say the game is still hugely enjoyable.

And the Titans… jumping up and taking control of a 3 story mechanical beast that can lay waste to everything is a game-changer. The game is literally entirely different when you mount up and you change from this incredibly mobile and athletic pilot to a lumbering beast with enough firepower to take over a small country… actually most countries. You can also hack into anti-Titan guns on the map and turn them against the enemy force which adds a much-needed tactical element to the game.

And because of that,  Titanfall offers the very best multiplayer experience that exists in gaming at the moment.

Will it stand the test of time or will people quickly find some unbalances in the game which will relegate it to a distant memory? Who knows? Personally I think will soon be unpicked, and we’ll no longer see Titanfall as being the major contender to Call of Duty’s multiplayer throne.

However if Respawn release the sequel without the Azure server requirements, a lengthy (8+ hours) single player campaign and some new in-game modifiers I think they could well become the next biggest gaming experience. From Microsoft’s side, if they want to sell the cloud as a solution they really need to cover the planet. The lack of data centres in Africa and Russia is unacceptable if these are going to be used as selling points.

Australia was recently deemed cool enough to get their own Titanfall servers, so now every Caucasian geographic area has one besides Russia.. what do we need to do to get our own? 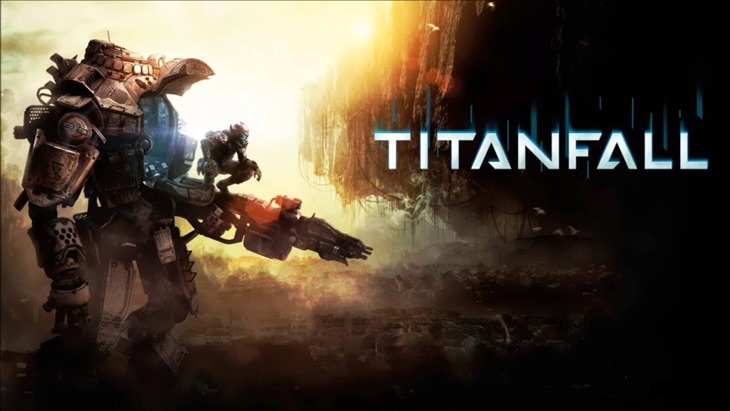 Should you buy Titanfall?

Well in my opinion it is overpriced as it only offers a single, albeit incredibly good, experience. So in the value stakes I’d say no. If you prefer single player experiences then avoid this like the plague. Then again, last night I ripped the arms off an enemy Titan and smashed him into a mountain. I also ripped a pilot out of his Titan and threw him across the map and if I can’t recommend a game that offers that then I don’t know what I’m here for. Oh and blowing up enemy grunts using your anti-Titan weapon is immensely satisfying.

The game has obviously been lovingly crafted by a team of developers who live for online multiplayer and they have pretty much got everything right. But at some point someone should have pointed out that a large portion of the gaming audience also like single player and playing just for fun.