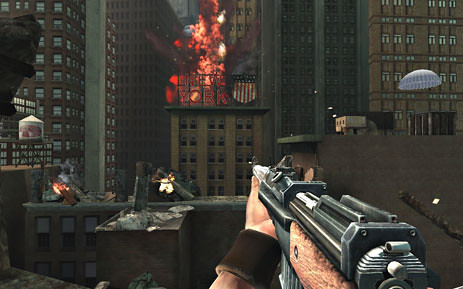 We’ve all seen the signs before. A concept is born, something a little different from the norm, excitement is created around the idea, and everyone starts anticipating a game that should add a twist to the already flooded market of the average game. Enter Turning Point: Fall of Liberty. A game which had an idea that promised to change WWII shooter for us. How did it do this? Let’s see if they could live up to the promises they made.

Here goes the story. Basically, they set the tone as follows. Winston Churchill actually dies when he got hit by the taxi, and without his leadership, the German forces manage to invade America, and take over in a way that was feared from the beginning of the war. Nice concept, right? Should have been, but this game is absolute proof, that an intriguing story is nowhere near enough to create a great game, by any stretch of the imagination. 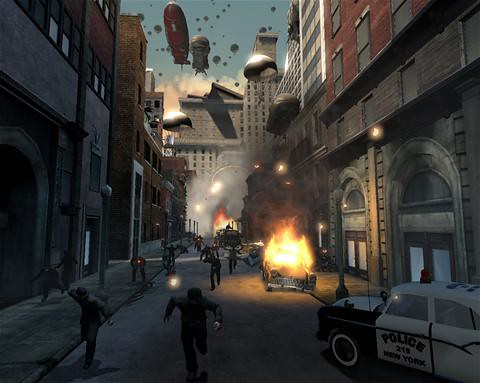 The game starts in New York City, atop a skyscraper that is currently under construction. Enter our hero, a Construction Worker named Carson. Would you like some more info about him?? Me too, cause that’s it, no more info that that, even when you finish the game!! The sky is littered with German fighters, and all out war has broken out in New York City, and Carson is going to help the rebellion fight them. That’s it. With a game based an idea as novel as this, you would really expect them to elaborate on it a bit.

I then move to gameplay. Take a FPS, give it to a 10 year old to design, and the gameplay would probably come out better than it did in this game. It’s generic FPS shooter action, with a more cartoon feel to it than anything, but this thing is based on the UT3 engine for goodness sake. How do you get it so wrong? Animations look terrible, textures seem incomplete and the characters are downright awful. The controls are no better either.

Trying to aim the weapons, supposedly unreleased prototypes from the time is almost impossible. A head shot could be registered as anything, including a foot shot. You will also almost always need to aim down the gun’s sight to make contact with any of the enemies.

Another unbelievable problem with the game is this: How does a game that looks this bad, actually struggle with framerate issues. Really struggle. Any kind of onscreen explosions or action, literally drops the framerate so much, it staggers. 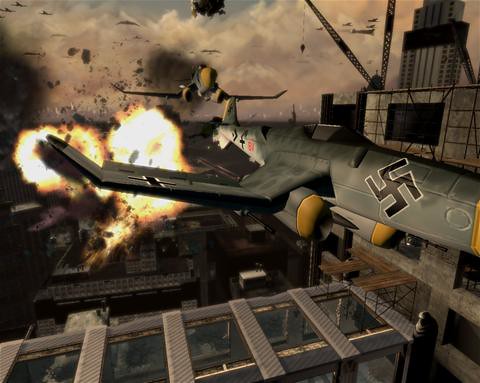 There is one part of the game that does shine, and that’s the music. A classical score set from the period is the only part of the game that actually seems to have any kind of decent direction to it, but please don’t get this confused with sound effects. They are not so good, and sound muffled throughout the game.

I should go on and tell you a load more in depth pieces about the game, but I just cannot give you any more than this. It just lacks depth in any region, is designed terribly, and should never have been released in the first place.

In conclusion, Turning Point: Fall of Liberty should have been called Turning Point: Fall of Gaming, as this is a collection of bad direction and all round terrible programming. The story offered everyone such promise and potential, but it unfortunately turns out to be a complete mess, and I could never suggest anyone spend any kind of money on it, even in a bargain bin.