Home Features World of Warcraft: Battle for Azeroth review–Welcome to the world of Worldquests

The return to a new World of Warcraft expansion is always an exciting time for any fan of the game. For me, a relatively new player only starting in Warlords of Draenor, I felt Legion was a bit too short. I took a few months’ break after playing for almost two years, only to return during the Battle for Azeroth pre-patch somewhat saddened and excited about the new expansion.

It wasn’t until I got into the thick of it, a few levels on the way to 120, that the new expansion hype really hit – and then I was hooked… again. Legion ended as we finally stopped Sargeras, the rogue Titan who sought to bring the world to heel. We’re unsure if we actually killed him as Illidan said his goodbyes and left with the rest of the Titans to decide Sargeras’ fate. His duty was fulfilled. Sargeras’ final crusade, along with his endless Legion, was to bring ruin to Azeroth – the planet home to the Horde and Alliance as we now know it.

Azeroth is also a Titan, asleep and waiting for… well, who knows. Sargeras, before being pulled back by the Titans, stabbed his huge sword into Azeroth, causing her to bleed Azerite – which brings us to World of Warcraft: Battle For Azeroth.

Back to the Roots – Alliance vs. Horde

Lore is often boring for some people, and for those, I’ll offer a very short explanation of what we are doing right now. After banding together to stop the Legion, the Horde and Alliance are now at each other’s throats again after Sylvanus Windrunner, the Horde Chieftain, burnt down a tree. The Alliance, upset that this tree was burnt, stormed Lordaeron, their old home which had been taken over by the Horde, and were almost defeated until Jaina Proudmoore, out of nowhere, arrived on a flying ship and helped them retake Lordaeron. It was all for nothing as Sylvanus used her blight to blow up Undercity and destroy Lordaeron. The announcement trailer shows the start of this battle. 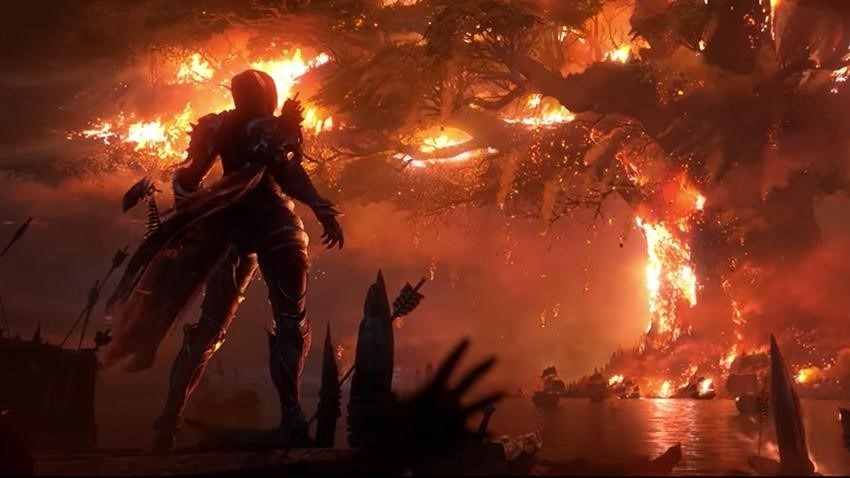 So, Jaina (the Crystal Maiden) is back. Blizzard decided to slap two new continents, Zandalar and Kul Tiras, on the map and we’re back to corpse-camping each other in the open world to teach those filthy Alliance people a lesson.

Many dread the levelling experience, but as someone who has already done it with two characters, I quite enjoyed it. The Zones are absolutely beautiful, with my favourite being Zuldazar, Zandalar. World of Warcraft is well-known for paying homage to pop-culture and the Zandalar Trolls have adopted dialogue from Black Panther, including “Zandalar Forever.” I quite enjoyed that. The story is also somewhat a rough adaptation of King T’Chala’s battle with Killmonger who believes he should be King. I’ll stop there to avoid spoilers. 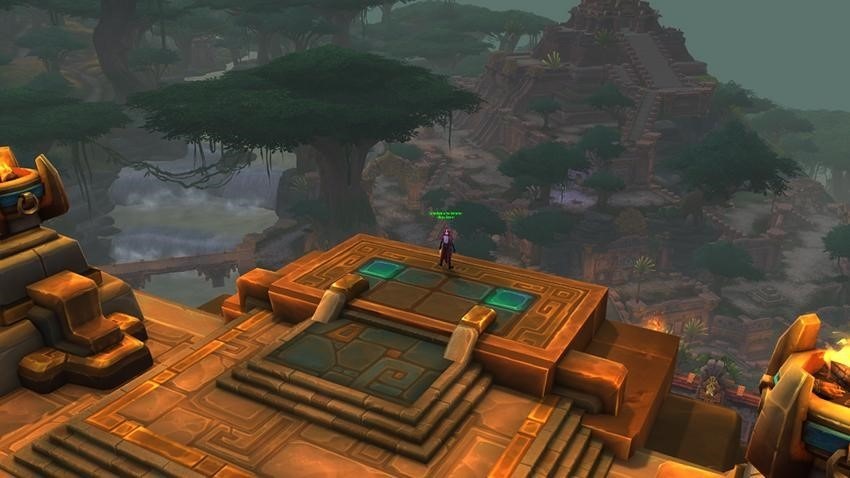 I haven’t leveled an Alliance character (I never will, scum!) but the Horde zones are particularly beautiful as they play out around Blood Trolls, Wakanda, and cute little fox looking characters who love Llamas and are going to start World War III if not made into a playable race. 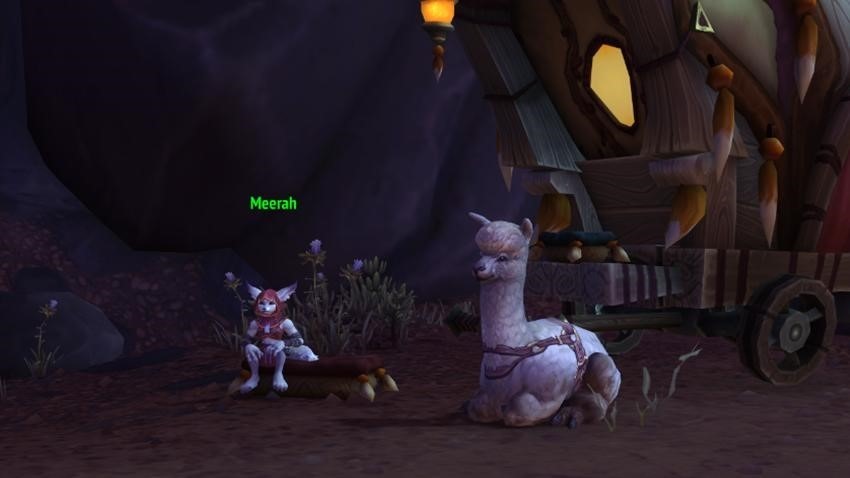 My first run through, on my Rogue, I took the time and completed all three zones and all the

quests. I’ll be honest, I didn’t really pay attention to the story, but I thoroughly enjoyed the leveling experience. On my Mage, however, I sped through the leveling because I’d now had a taste of max level. In summary, of all three expansions I’ve played, Battle for Azeroth gets my vote as best leveling experience so far.

In Legion we had to spend tedious hours farming Artifact Power for our Artifact Weapons which were needed to fight the enemies of the Legion and finally defeat Sargeras. Azerite is essentially the same thing. World of Warcraft would be nothing without a grind, and that’s what Azerite essentially is. Your opening quest is to get your Azerite Neck, a powerful piece of jewelry able to catch the leaking Azerite (which is Azeroth’s blood essentially) and harness its power to empower pieces of gear offering you new abilities and increased damage. The neck is comparable to the weapon which you empowered with Artifact Power in Legion to enhance abilities, but thank goodness legnedaries are gone. That was perhaps the best part of returning to World of Warcraft – no more grinding for Legendaries, every single day. 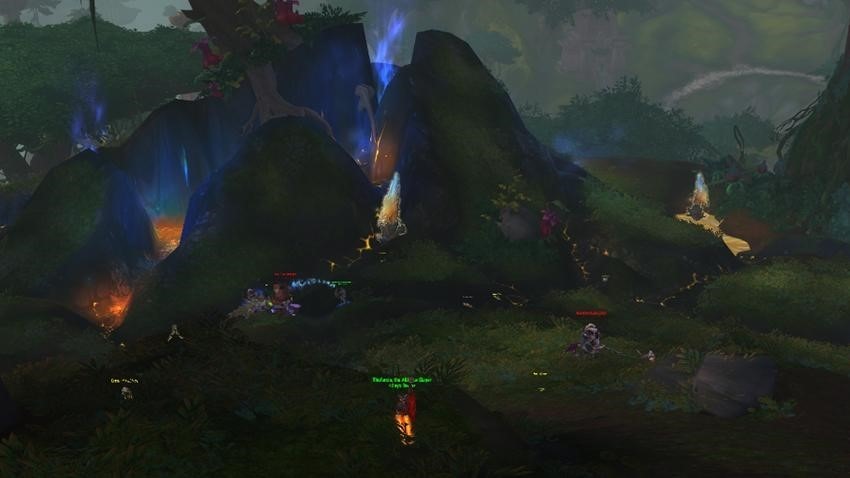 Azerite is obtained through various World Quests, Dungeons, Raids, Island Expeditions and, well, everything. It’s an endless grind, if you want it to be, and a crucial part of the new expansion.

In place of Legendaries, you’re now able to obtain Azerite Gear. This gear goes into the head, shoulders and chest slot which has unlockable traits depending on your neck’s Azerite level. This, for me, has been the best part of this expansion. It’s relatively easy to acquire, and Blizzard recently made this gear tradable between party/raid members which means you’re able to share pieces with friends if they don’t have your optimal traits and vice versa. 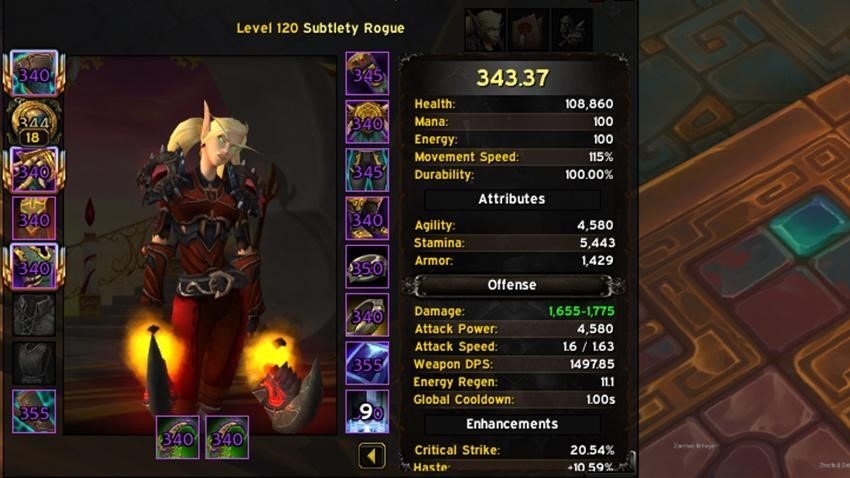 These are your legendary replacements and the great thing is you don’t have to grind endless content in order to get them. They drop from World Quests, Dungeons, Raids, and can even be bought from Emissaries of different factions once enough reputation has been acquired. I felt this was Blizzard’s way of making the game far more accessible for the casual player as grinding for Legendaries required either incredible luck, or a weekly grind of clearing every single piece of content available in the game before reset. 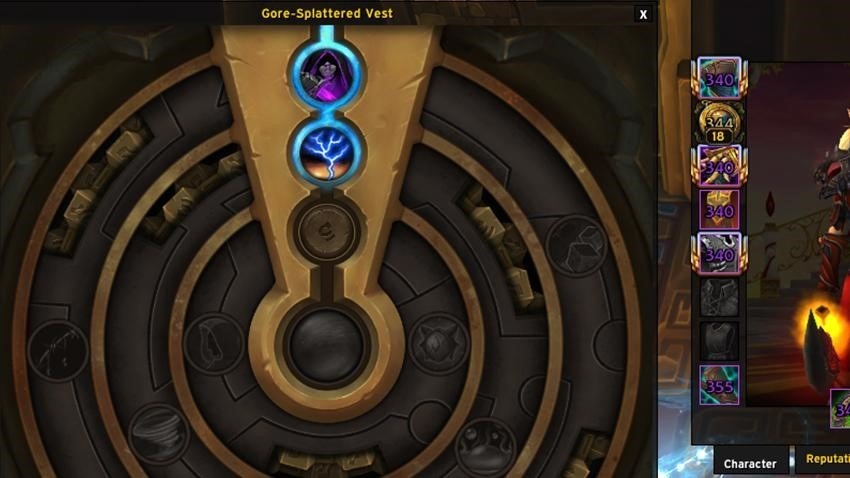 Azerite gear, at the moment, is capped at 340 from Mythic dungeons and World Quest Caches, but will increase with the opening of Raids and Mythic+ tomorrow. The perpetual grind begins, but this is just one of the many grinds in this expansion.

Island Expeditions sounded exciting when announced. You essentially head to an island and clear out mobs and mine Azerite till you reach a cap (bound to difficulty of Normal, Heroic, Mythic and Player vs. Player) and are awarded a minimal amount of Azerite Power when completing the Island. Once you’ve reached a total of 40,000 Azerite you are awarded a juicy chunk of 2500 Azerite Power to empower your neck. That’s it. No gear, no materials, nothing. There’s a small chance of getting a mount, but you really don’t need to do it other than the required amount of 40,000. 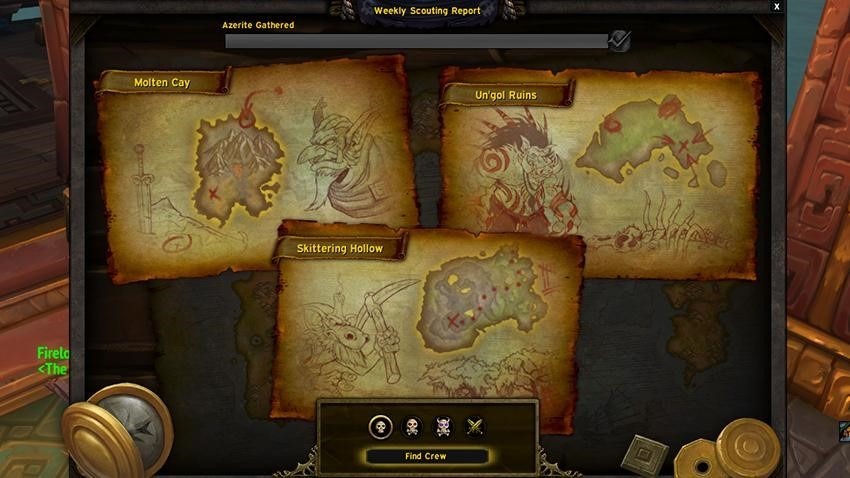 It’s a schlep and not enjoyable at all, unless you’re brave enough to do player vs. player where you race against real players to complete the expedition, instead of Alliance controlled bots who are really easy to kill.

This was probably my biggest let down, and it seems like Warfronts (releasing tomorrow) are going to be similar and just another way to grind Azerite Power.

Blizzard have done away with PVP realms and have given players the option of activating War Mode which means running around in the open world means you’re able to hunt lower level players, kill them, and camp their corpses until they either log out or curse at you. The more players you kill, the better as you’re given an “Assassin” buff which increases your damage. If you kill too many, a bounty is put on your head and other players can kill and earn rewards of your corpse. What this means is you’ll often run into groups 3-5 people hunting down their enemies and chasing the “Alliance/Horde Slayer” achievement and title. I’ve already done this, and it was some of the most fun I’ve had this expansion. 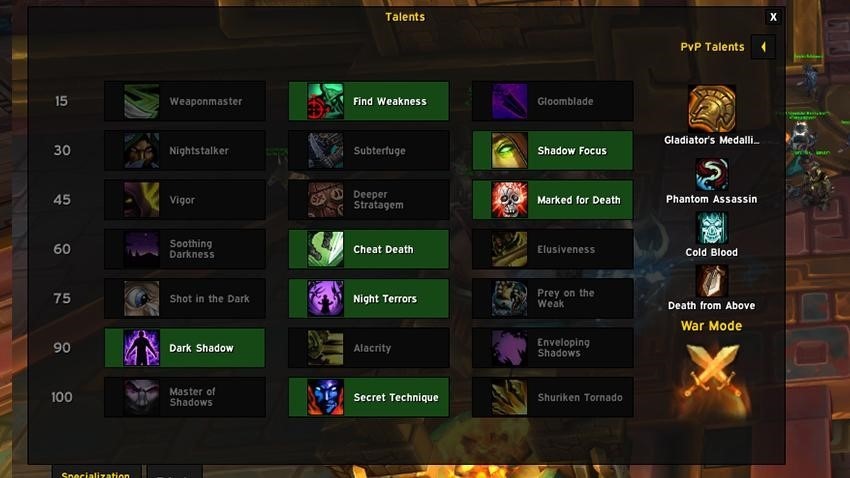 Blizzard, again paying tribute to pop culture, have included crate drops around the world. A little Zepplin can be heard buzzing and crate will drop. You then need to battle Alliance or Horde players to take ownership of the crate and loot it. This is, essentially, a battle royal for World of Warcraft, and it’s great!

While I’m on a grind-rant, this expansion is one of the first, which I’ve played, which has a ton of gated content bound to Reputation with the different factions. Champions of Azeroth (the main one) grands you 15 item levels every time you reach a new tier of reputation. The tiers are Friendly, Honored, Revered and Exalted. This means you’re grinding World Quests every single day, clearing both continents, in order to increase your reputation with Champions of Azeroth in order to upgrade your neck. It’s not necessarily needed if you’re a casual player, but if you’re planning on raiding and competing, you’ll need to get the highest reputation possible in order to increase your neck’s item level. 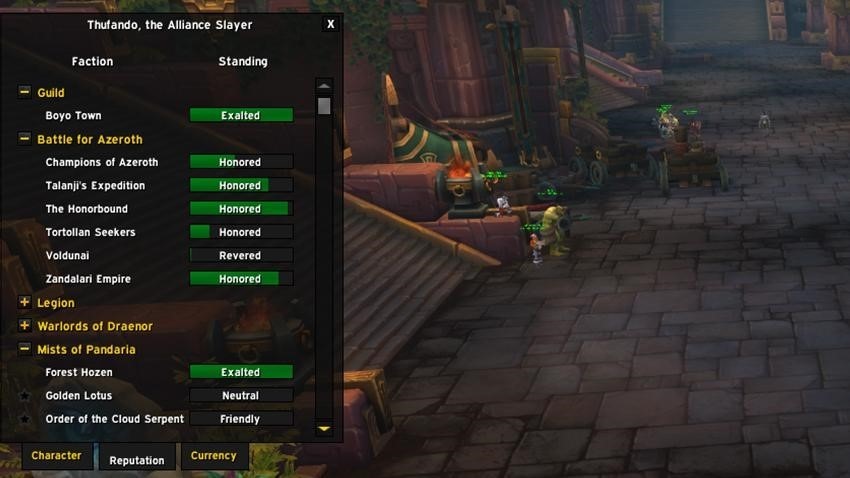 Next, there’s the Honorbound which is the gate for your War Campaign, the new storyline for Horde and Alliance which sees you putting up bases on respective zones in order to continue your War Effort against the Alliance. You need certain levels of reputation with the Honorbound to progress, but luckily for us, Honorbound World Quests are plentiful which means you do not stop doing World Quests as the reset three times a day. It has honestly been a painful three weeks with very little to do after you’ve cleared your Mythic dungeons. Today, on reset, Blizzard is releasing the new raid, Uldir, Warfronts, and Mythic+. That means on one day their biggest amount of content will be released, but players have been grinding for three weeks with very little to do.

Getting Exalted with the other factions just means you’re able to buy recipes for professions and Azerite pieces. There’s really no rush for casual players, but the more serious players have done nothing but World Quests day in, and day out, for three weeks.

I’m a massive fan of dungeons in World of Warcraft. They have always been the one thing I’m most excited about and, honestly, BFA has not disappointed. The dungeon design and mechanics are exciting and you can see Blizzard are putting a lot of effort into their dungeons since the popular rise of Mythic+ and the Mythic Dungeon Invitational (MDI). 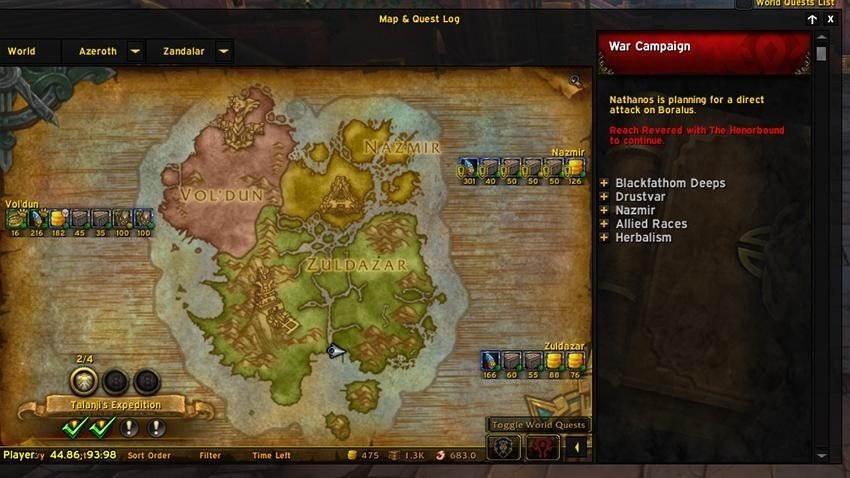 Dungeons are spread across all continents and also feature as part of the story when considering the enemies you face. All, except Siege of Boralus, are open to start playing once you hit max level and are geared enough. Siege of Boralus is gated behind Honorbound reputation as you need to complete the War Campaign story as well. These have been some of the best dungeons I’ve done in World of Warcraft, and I cannot wait to dive into Mythic+ tomorrow.

I have no doubt that Battle For Azeroth will consume me for another two years, and if it’s anything like Legion (in terms of content) I think it will surpass its predecessor as my favourite expansion so far. I look forward to raiding and Mythic+ while destroying under-geared and under-levelled Alliance players just because I can. For the Horde!