Home Gaming EA’s got some extra DRM in Battlefield 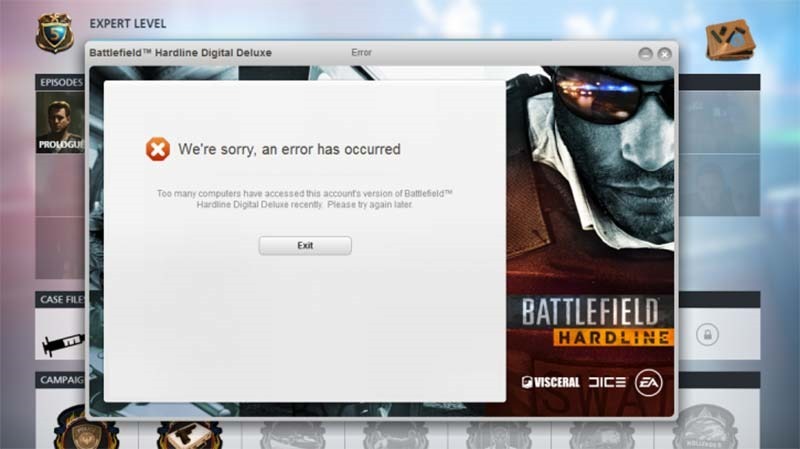 “Players looking to benchmark more than five hardware configurations in one 24 hour period can contact our Customer Support team who can help,” says EA.

EA’s been righting many of its anti-consumer wrongs of late, or perhaps it’s just gotten better at PR. Much of the vitriol that’s traditionally been directed at the company is now being funnelled towards Ubisoft and their anti-consumer practices instead. Battlefield Hardline is out now, and it’s received positive to middling reviews. It’s not the game itself that’ll be getting consumers irate again – but rather the game’s DRM on PC.

As it’s an EA game, it obviously uses Origin, which is a form of DRM in itself, but there’s more. According to Guru 3D, who’ve been using the game to do a bit of benchmarking, the game’s got a second layer of DRM, that prevents you from making too many changes to your hardware configuration. Yes, switching out your hardware, effectively giving you a different hardware ID, will temporarily lock you out of the game. Here’s what Guru3D says:

Here’s what EAs DRM is doing, EA don’t just verify the number of PCs you work on slash use, nope .. they dare to monitor hardware changes inside your PC now, which I am sure is a privacy breach on many levels. So once we insert new hardware (CPU / mobo or graphics cards) the hardware id # hash changes and if that happens a couple of times they are rendering your activation invalid. From what we now have learned, you get to have 5 hardware changes per license. Use them up and access to the game will be blocked for 24 hours per activation.

Before you get up in arms about this, it’s very unlikely that you’ll make 5 hardware changes to your machine within a 24 hour period, but if you plan on doing any benchmarking, this is the sort of thing that could get right up your nostrils. It’s likely a way to prevent account sharing (which is something Steam’s got covered perfectly). It’s also suspected that that the DRM is in part, connected to DICE’s new hardware ID locks that are meant to keep hackers and cheaters out of the game. Unfortunately, as there’re already tools to circumvent that, the only people who’re ever affected by any sort of DRM re the people who actually pay for games.

It’s one of the great ironies of DRM; the people they’re meant to lock out are never affected.