There’s been a missing contender in the local smartphone market for a while now. Apple and Samsung are the household names of today, with other Android smartphones taking a backseat despite their superiority. The 2013 HTC One was one of these devices, with only really tech savvy folk realising how phenomenal it was. This year HTC has given the One a bit of an upgrade with the One M8, and it’s already making a lot of noise.

Those familiar with Android handsets will know that Samsung isn’t the undisputed leader of the pack. Sure, the Galaxy line is impressive, and locally it’s definitely the go-to brand for anything that isn’t an iPhone. But everywhere else HTC is the knight in shining armour, and for good reason. The HTC One was a faster, sexier alternative to the S4, and the M8 is definitely aiming to do the same with the S5. The One M8 is one of the fastest phones released this year, coupled with a brand new version of Sense UI and an interesting dual-camera solution.

The HTC One was a strikingly stunning phone, and the M8 is no different. This year’s model does have a few differences that immediately set it apart for its predecessor. Firstly, there’s a lot more metal this time around. The entire back of the M8 is metal, with only the top and bottom edging being cased in plastic. This apparently helps antenna transmission, so there is some reasoning to not going 100% metal all around. The back plate wraps around to the gorilla glass that covers the front part of the phone, giving the entire thing a premium look and feel. The M8 is more curved than the more squared One, which was aimed to help you grip the rather massive phone better.

Unfortunately, this is countered by the phone’s extremely polished finish. It’s beautiful, and keeps your fingerprints at bay (unlike most other glossy finishes). The only issue is that it’s too polished, and I had the phone literally slip out my hands like a wet bar of soap on more than a few occasions. Not something you’d want happening on a regular basis and disappointing considering HTC changed the curvature to actually avoid this issue. 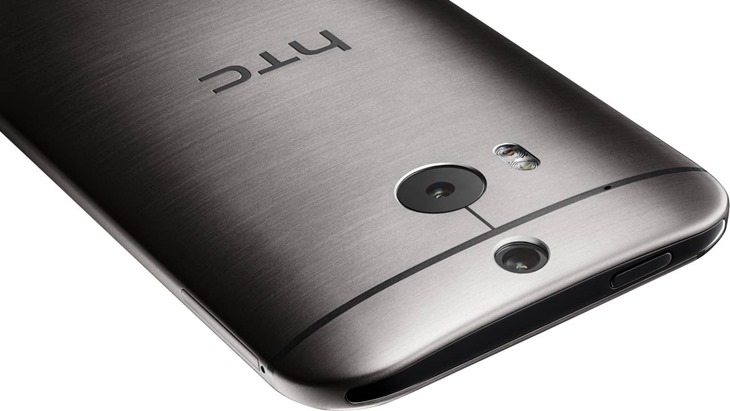 Despite this, the HTC One M8 is easily one of the sexiest phones ever made. It’s one of those phones you want to slightly creep out of your pocket, just for people to take notice and ask about it. It will be difficult to find someone who doesn’t appreciate the metal finish; although some may miss the smaller bezel that last year’s model wore proudly.

The slightly larger bezel does have some purpose though, with the M8 sporting a larger 5’ screen. Despite the slight inch bump, the M8 still retains a 1080p resolution and the same pixel density as the One. The M8’s display is stunning, with a crisp, sharp image and vibrant colour. The display does especially well in brightly lit environments, with minimal glare and great viewing angles. It’s great for all sorts of media viewing, gaming and pretty much anything else you’d use the phone for.

If there’s one thing that’s important to me when it comes to a smartphone, it’s how easy it is to turn on the screen and start using the phone. At first glance, the 5’ screen with the phone button oddly situated at the top frightened me. It’s hard to reach with one hand, but it only took a moment or two to realise that I might never need to use it again. The One M8 features a neat touch waking feature that lets you get into the apps you want almost immediately. Double tapping the screen wakes it up, while picking up the phone and swiping up immediately unlocks it. Swiping left or right takes you into Blinkfeed (more on that later) or the menu respectively. Simply put, it’s super user friendly, and almost as fast as the iPhone 5s’ fingerprint sensor unlock. Almost. 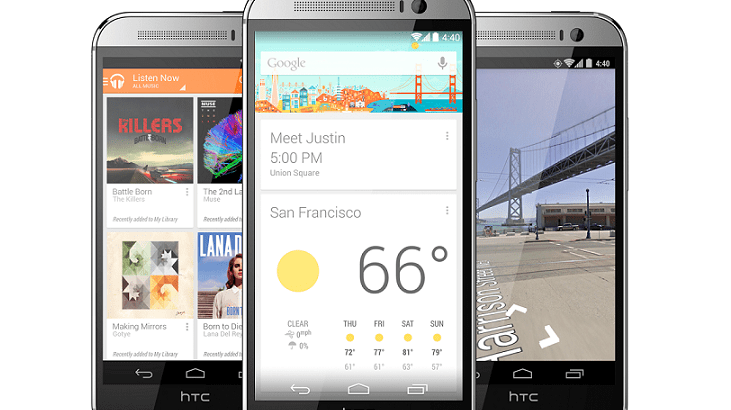 The HTC One M8 comes standard with the latest version of Android, but more importantly the latest version of HTC’s Sense UI 6. Most of the time additional software laid over original Android software leads to some bloating, but I’ve always found Sense UI to be one of the least intrusive. Sense UI 6, or “Sixth Sense”, follows this trend and is probably one of the best things about the new M8. The home screen is a simple, standard three-window panel with a variety of widgets for you to customise. Having Flipboard on my home screen was surprisingly useful, but not as much as HTC’s returning Blinkfeed.

Swipe to the left and the HTC window will greet you, with a plethora of information from your linked social media accounts and various different apps. You’re able to customise what appears on Blinkfeed, so mixing up my Twitter and Flipboard feeds made me one happy journalist. You can filter content with the press of a button, as well as search for new channels and add them to your feed. It’s surprisingly useful, and I’m not sure how I’ll survive without it once I get back to my iPhone.

Then I was reminded of just how darn over-complicated some Android settings menus are. Sure, you can swipe down the notification centre from the top of the screen and flick settings on and off with ease. That’s something that most phones do today, and thank goodness for it. When you dive into the actual settings menu however, it’s a messy affair. I might be accustomed to the simplicity of Apple in this regard, but that doesn’t essentially make the menu any better. Location and Internet settings for the various apps are cumbersome to sort through and set. Although it does give you a lot of control over the device, which is not necessarily a bad thing. 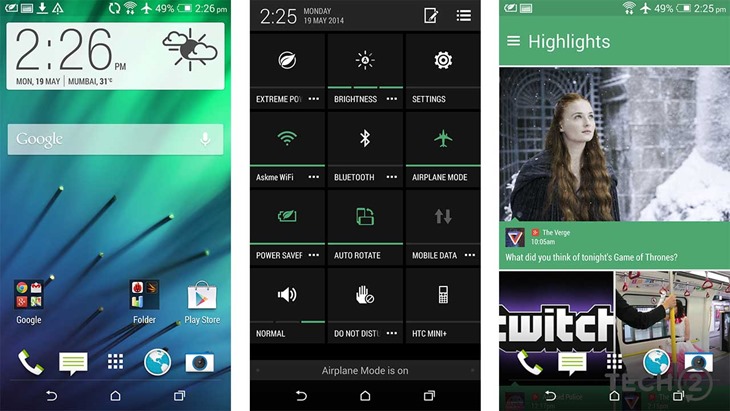 Standard battery life on the M8 is actually pretty great, and I didn’t have to charge it in the middle of the day once. In fact, I often went to bed with the phone still sitting on 30% battery life, which is impressive these days. If you’re a heavier power user, then HTC has you covered. The two power saving options have a massive gap between them. Think Nando’s Lemon and Herb compared to Extra Hot. Normal power saving will reduce brightness of your screen, reduce CPU usage and turn motion vibrations off. You can choose which of these features take effect. Extreme power saving turns all of these options on though, and even turns off data usage when the phone is in standby. This is for dire emergencies, and it’s great that it’s included, even if it renders the phone somewhat useless in some cases.

There is however one big difference between the original One and this year’s M8. Yes, the M8 still has the dual front-facing speakers using BoomSound (which are still absolutely fantastic), but the really game changer appears on the back. Flip the phone over and you’ll see not one, but two camera lenses. One is the same 4MP camera from the One, which makes use of slightly updated UltraPixel technology. The other isn’t a camera at all, but rather a lens that captures depth information. If you’re thinking 3D photos, you’re not far off. The M8 features a ton of post-processing effects that will blow the wind up any photographer’s skirt. The most interesting ones make use of both lenses. You can change the focus of photos after you taken the picture, which is an awesome feature that can really make your pictures stand out. Change the focal point, blur out the background and bam, the result looks like a professionally edited capture. You can also add a 3D effect to photos, allowing you to rotate the phone and let you mind wrap a little bit. Sadly, you can’t export these edits, and the 3D sometimes has some weird overlaps. It’s a novelty, unlike the extremely useful UFocus features.

Generally speaking, the M8’s camera is otherwise not entirely impressive. Low light shots still feature a loss in detail as the phone attempts to lower noise in the image, but thankfully the camera works surprisingly well during the day. Definitely not the best camera you can find on a smartphone nowadays, but rather close. HTC also understands the importance of the selfie, and so they’ve bumped up the front-facing camera to 5MP, as well as included a special selfie camera mode. Filters galore, in case you’re wondering.

Of course, all of this is nothing if the M8 chugs along as if it’s running on a coal engine. As you’d expect, HTC has crammed a lot of power into this year’s flagship model, with the M8 sporting a Quad-Core 2.3 GHz Snapdragon 801, along with a massive 2GB of RAM. The result is a smooth as butter experience no matter what you’re running, and not matter how much you’ve got going in the background. The M8 eclipsed every other smartphone using 3DMark benchmarks, although the app did warn me that the phone was breaking some of its fair use polices which have an affect on the score. But trust me, this is easily onoe of the most powerful phones on the market, outpacing the Galaxy S5 and iPhone 5s with ease. The M8 also features a microSD slot now, allowing you to increase storage to 128GB. A nice touch. 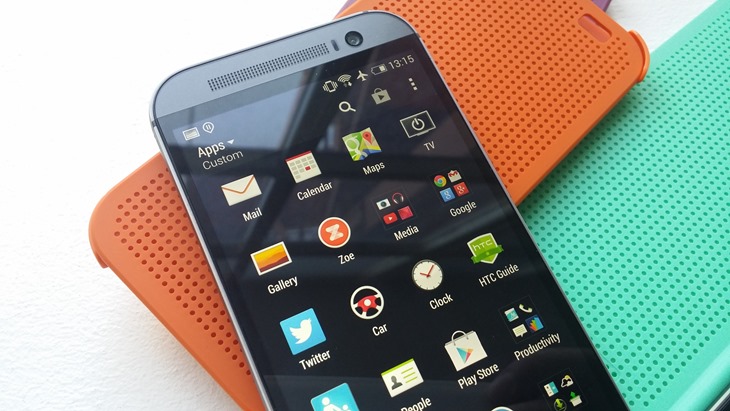 There really isn’t much else to say about the M8 other than reiterating the obvious. HTC has once again delivered a standout product, one that rivals the leaders of the pack. It’s a superior phone to the S5 in more than a few ways, and could easily be the best smartphone released this year. There are still on or two releases that could claim top spot, notably LG’s G3, but HTC can be proud with what they’ve achieved this year. It’s not a quantum leap forward, but when you have a phone like the HTC One there’s little room for improvement. Thankfully the M8 does offer enough to make it an enticing choice for anyone looking to upgrade. It definitely should make your shortlist, if not end up at the top.