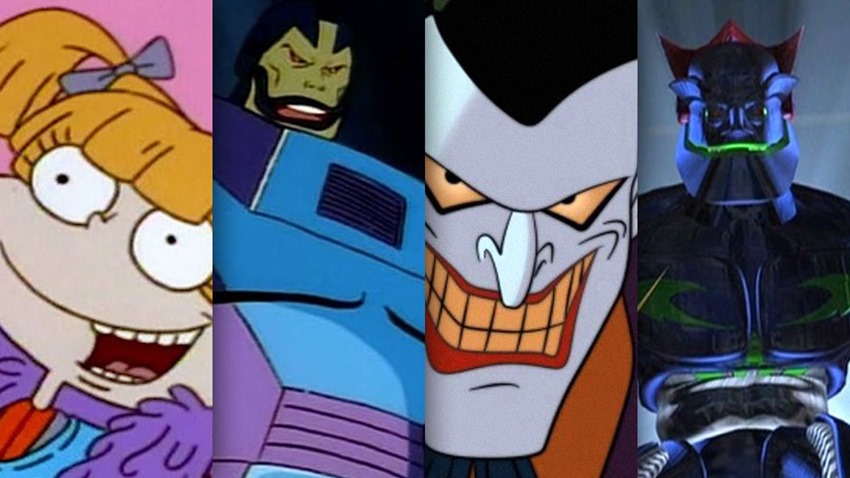 If anyone ever tells you that they had the best of something back in their day, it’s easy to debate them. Did people in the 1980s have the best social interactions before the 2010s introduced Twitter? Without a doubt, because people are bastards. Did the 1970s have a better graphic design before every video game recently released beat the neon style of the eighties into submission as if it were a bad horse joke? Probably!

Something I remain resolutely firm over though is the fact that the 1990s had the best villains spread across various animated series. From Batman to Mighty Max, ReBoot to X-Men, we were swimming in a golden age of talent and characterisation that has been unsurpassed since then. Don’t believe me? Here are ten examples to get all nostalgic over. 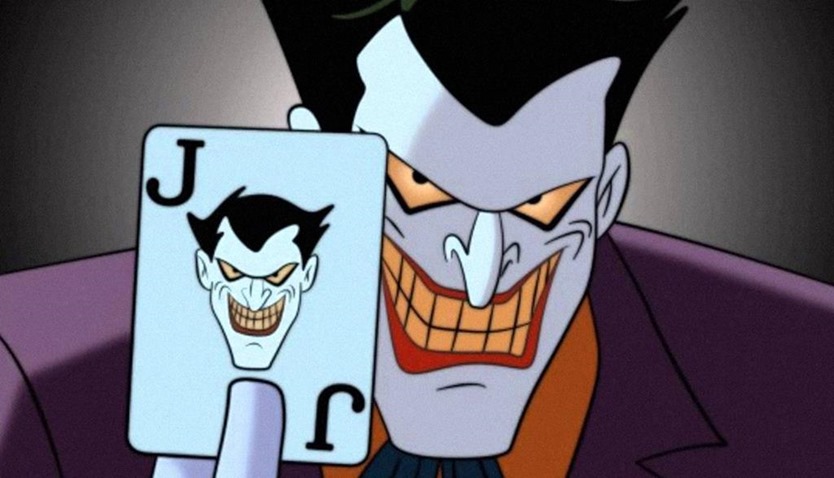 Screw it, might as well kick this list off with the biggest and best voice around, right? It’s hard to imagine it, but the idea of Luke Skywalker flexing his vocal pipes and giving life to Batman’s greatest arch-nemesis was ludicrous at the time. Here was an actor, an icon of a generation who had made a name for himself as a hero of the silver screen and had been hired to help revive the caped crusader in the wake of his box office success.

It was casting genius. Mark Hamill clearly threw himself into the role, had a blast and continues to do so decades later with a character who was equally hilarious and homicidal. Hamill’s Joker wasn’t some playful prankster, he was an actual threat. A lunatic whose schemes made him an unpredictable madman with a body count that matched his sinister genius.

Whether it was the original clown prince of crime who menaced the Batman or a future incarnation whose genius made him a threat to the Tomorrow Knight, this Joker became a template for any incarnation in any other form of media for years to come. Something worth smiling about, you could say. 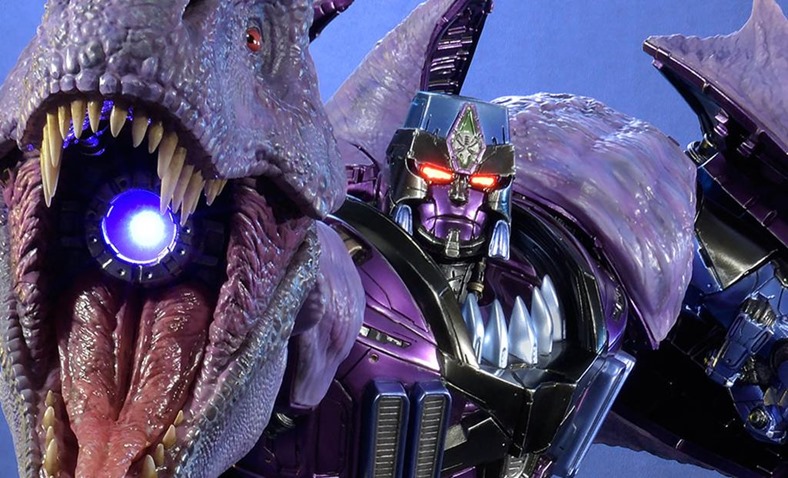 Sorry Frank Welker, but there’s only one Megatron voice of my generation, and that’s David Kaye. YEEEEEESSSS. The Beast Wars veteran who led the Predacons in the war against the Maximals, Kaye’s Megatron was cool, calculating and so damn effective as a nemesis that he pretty much emerged victorious after the titanic war on prehistoric Earth.

Having successfully conquered Cybertron on his return, here was a threat that had done the impossible and managed to keep the heroes at bay as they constantly fought a war of attrition. Sure, good may have triumphed over evil eventually, but there’s no denying just how effective this incarnation of Megatron truly was in the grand scheme of things.

And if you liked Kaye’s take on the character, there was plenty more to love when he returned to action in the Armada, Energon and Cybertron series. Bonus fact! Kaye also switched allegiances in Transformers: Animated when he voiced Optimus Prime. Bet you didn’t see that one coming, right? 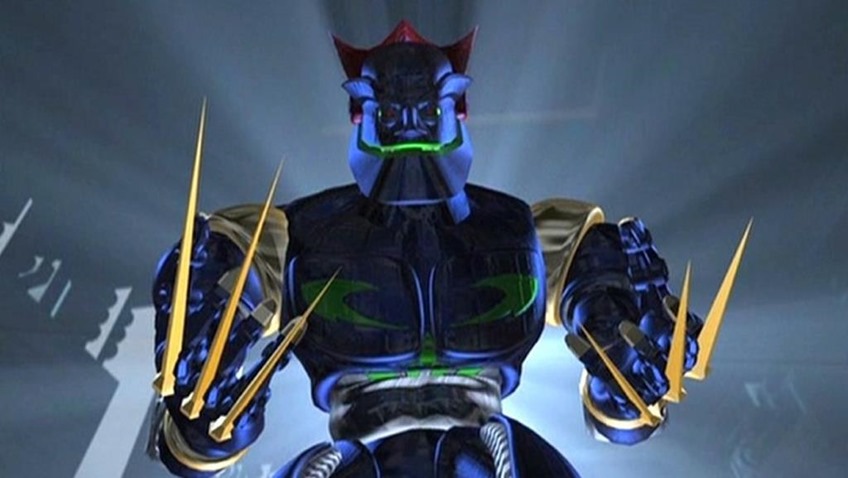 ReBoot may look quaint by today’s standards, but it was a revolution at the time. Computer-generated animation on a weekly schedule backed not only by great stories but by even greater characters and a truly memorable villain in the format of MegaByte. Tony Jay’s take on the character was magnificent, to say the least: Eloquent, calculating and dangerous to the extreme.

That alone made MegaByte one of the all-time greats, but his legend only grew from there. ReBoot would mature as a series, a grand war would wage across its system and MegaByte did the unthinkable for a villain at the time: He won. In the chaos of the Web War, it was MegaByte who exiled Mainframe’s Guardian to the far reaches of the web.

It was MegaByte who conquered the city and transformed it into Megaframe. It was MegaByte who ruled with an iron fist before he was finally overthrown in a climactic battle. Memorable, iconic and so much more, MegaByte was everything that a villain should aspire to be as not even death could stop this virus from fulfilling his format: To corrupt and conquer. 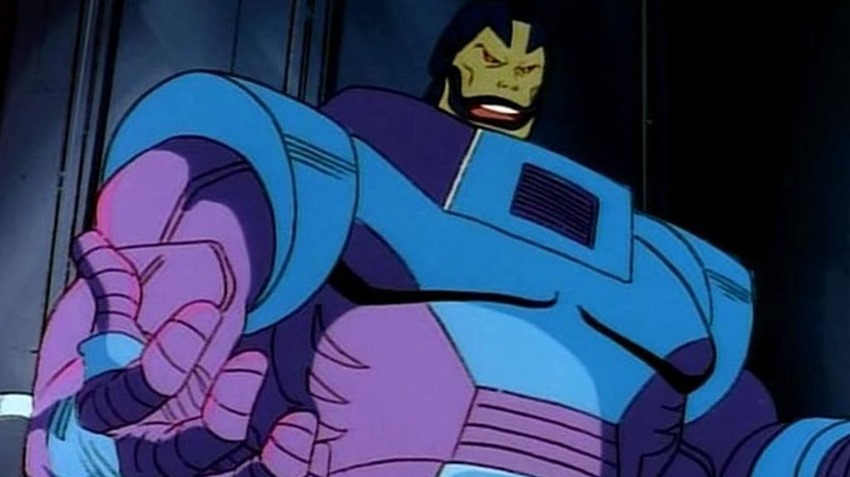 Up until the 1990s, cartoon villains were…well..they were cartoons. They were often creating grand schemes, being foiled and the hero would laugh about their failure to conquer the world at the end of the day. And then came…Apocalypse. This wasn’t your cookie-cutter Saturday morning cartoon villain. This was an extinction level event on two legs and clad in Celestial armour.

Apocalypse was danger personified, a nemesis whose philosophy of the survival of the fittest was gloriously delivered by John Colicos for the first four seasons of X-Men. Apocalypse could have easily been a two-dimensional villain, but instead there was a quality to the character that resonated from his eloquence and was delivered with a Shakespearian touch that made the heavens tremble.

Just listen to Colicos deliver the line “I am as far removed from Mutants, as they are from you” and tell me that you don’t get a shiver sent down your spine. Now that’s how you create an effective villain who raises the stakes. 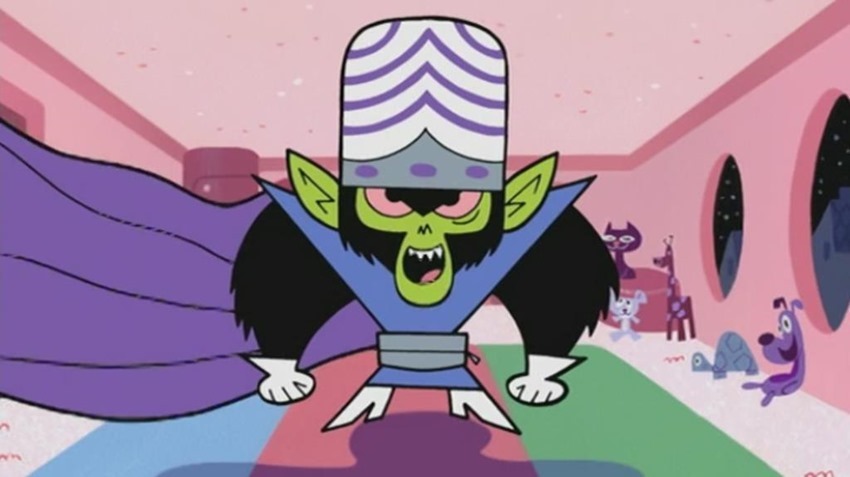 On the other hand, there’s nothing wrong with a cartoon villain who lives up to the tropes and cliches. Take Mojo Jojo for example, a Powerpuff Girls nemesis whose primary schtick was that he happened to be a talking super-genius ape who wanted to destroy the trio of girls who combined the virtues of sugar, spice and everything nice with a touch of chemical X.

Mojo’s entire premise was that of revenge, a verbose antagonist who laid out his schemes like someone on Twitter trying to piggyback off of your jokes. The real tragedy here is that Mojo is an accidental creation whose true motive is to get back into Professor Utonium’s good books. That elevates the mad monkey to a sad figure, who despite all his rage is still just a Smashing Pumpkin’s reference stuck in a cage.

Also, he has a cool name. 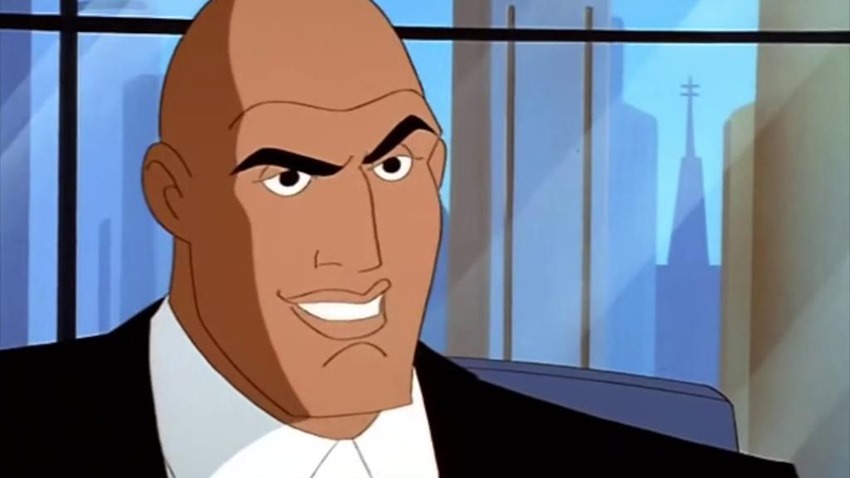 Every hero is defined by their villain, and sometimes opposites attract. You couldn’t get more opposite than Lex Luthor and Superman then. On the side of justice, you had an altruistic visitor from another planet who embodied American values at their finest and lived to fight for truth and justice. On the other hand, you had Lex Luthor: Amoral, greedy and representing the potential good and bad of humanity in one super-genius package.

Actor Clancy Brown may have originally auditioned to play Superman, but casting him as Luthor was another stroke of genius from back in the golden day that Warner Bros. Animation dominated. Brown’s acting chops lent Luthor an air of menace, sophistication and hate that made him the iconic voice behind the character in much the same way that Mark Hamill had succeeded in defining the Joker.

More importantly, this Lex Luthor was very very human: Flawed, selfish and capable of so much more. A fact that was often wasted and sidelined by his grudge against the man of steel. 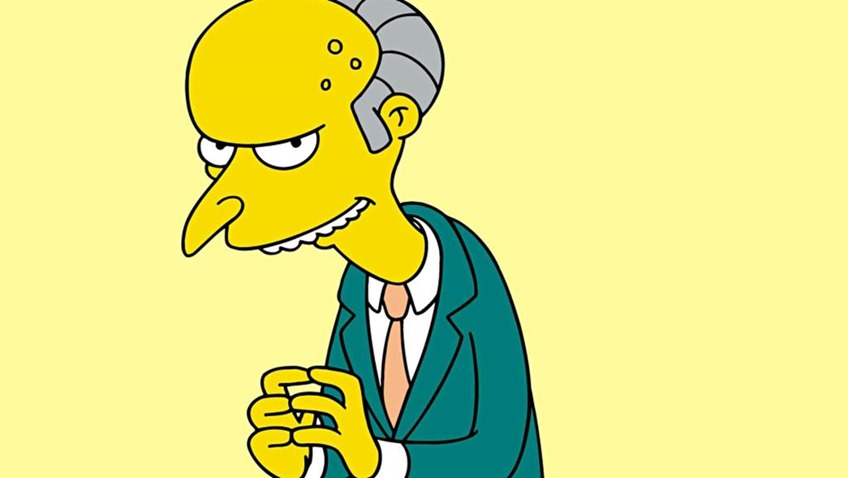 Where do we even begin with Mr Burns? Crippling Milhouse so that he could inspire a sports team to win? Check. Attempted to murder two dozen puppies so that he could make a new suit? Check. Blocked out the freakin’ sun on Springfield so that he could gouge the populace out of every single penny that they had saved when they were forced to run their lights 24/7? Holy crap, check and check.

While he’s far more comedic and played for easy old man laughs these days, there was a time when Mr Burns represented corporate greed at its worst. Unchecked power, too much money and sycophants okaying his every move resulted in an antagonist who was usually defeated, but whose lingering presence cast a shadow over every activity in The Simpsons.

Foiled, again and again, Mr Burns was like a cockroach with billions in the bank account, a reminder that no matter what victories were achieved in The Simpsons, C. Montgomery Burns would always emerge the true winner of life thanks to his endless wealth, power and influence. I’m…I’m kind of depressed now. That’s not…excellent. 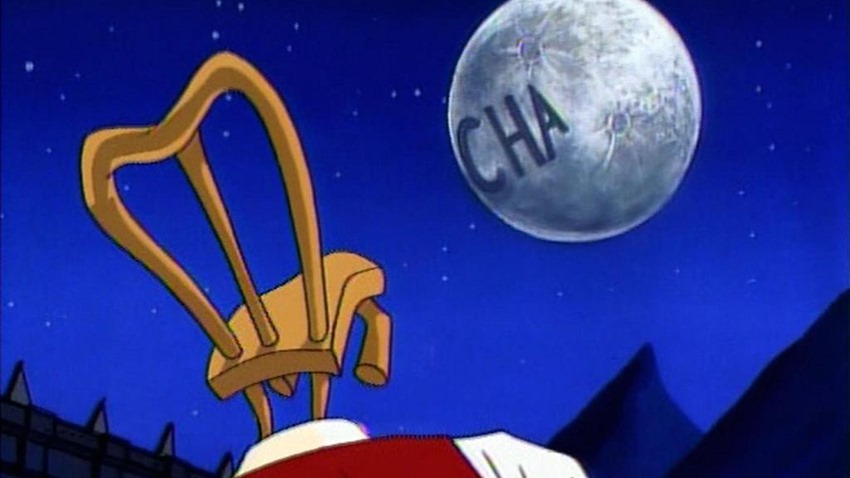 Yeah, that’s right. A well-cultured super criminal crime lord, who just so happens to have a chair for a face. While some villains wanted the world, Chairface Chippendale had even grander aspirations fr life, which culminated with him half-succeeding at carving his name into the Moon. Unfortunately, he ran out of space, and the Tick got all up in his business.

The 1990s were a very weird time, but still! Chairface Chippendale! He has a chair! For a face! 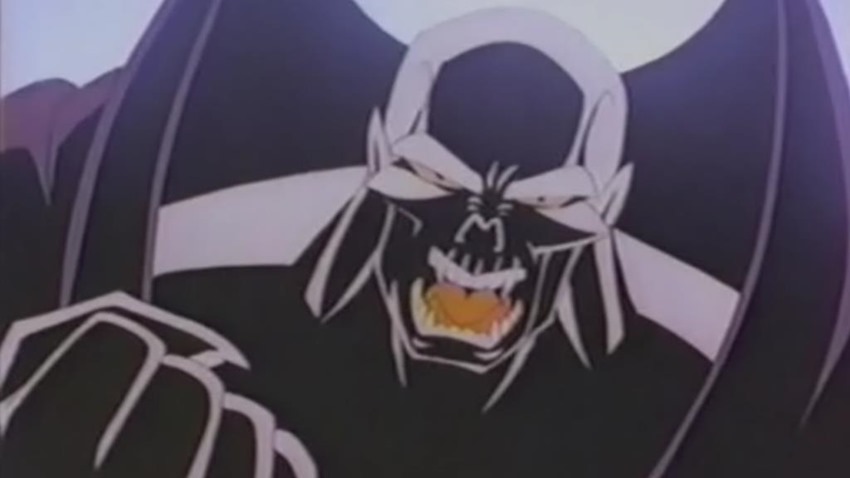 It may have been uncommon to see a villain win in the 90s, but to see a villain emerge victorious over the corpses of defeated heroes? Holy 1990s toy commercials, Mighty Max was playing for keeps. With Tim Curry giving the grand villain the class that he deserved, Skullmaster was a force to be reckoned with thanks to his proficiency at wielding spells or the sword.

More than a match for Max’s guardians Norman or Vergil, the real tragedy here is that the hero of the day was always destined to lose. Skullmaster was an inevitability, a destiny that could not be stopped. Or he could have been, if Mighty Max had survived for a third season. After the networks pulled the plugs, however, Skullmaster’s victory wasn’t just certain. 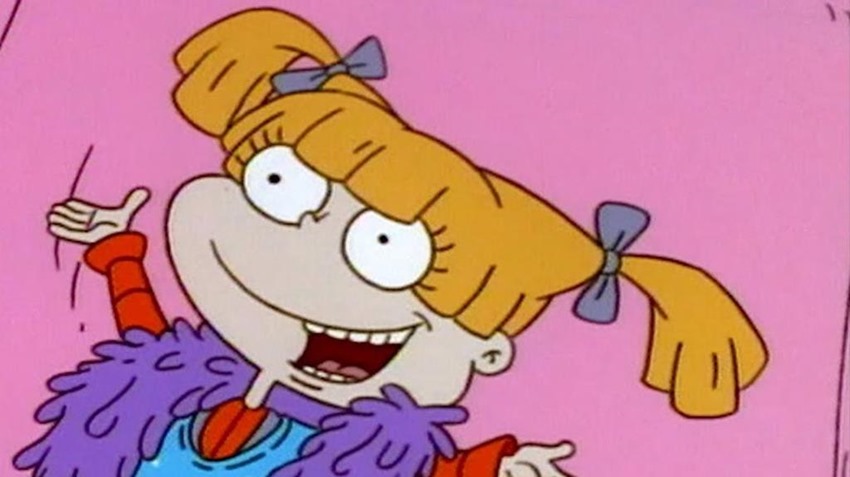 You ask yourself wat could be worse than a madman with ideas for world domination, and I’ll tell you what: A child. Children are blank slates upon which we have carved in our values and ethics, because if they’re left alone then you’ve got no one but yourself to blame for the Lord of the Flies scenario which develops.

Angelica represents the worst that a child can be: Spoilt, loud and with a psychopathic streak a mile wide. Honestly, it’s a miracle that Angelica didn’t become a serial killer by the time Rugrats ended, because she was a maniac wrapped up in the shell of childhood innocence. Heck, I’m fairly positive that Rugrats may have been a backdoor pilot for an animated Children of the Corn TV series, thanks to her precocious shenanigans.