I’m going to go out on a limb here and argue that when The Hunger Games hit our screens, it wasn’t really a rip-off of Battle Royale. Yes, they have similar themes, but the shared genealogy pretty much ends there. The two films are nothing alike and if Suzanne Collins did copy her idea from Battle Royale, she changed everything else.

It’s not a new idea anyway – the concept of the last-one-standing post-apocalyptic game show is a long running one, a subset in the ‘bloodsport’ trope. This theme appears a lot of times and even televised bloodsports have been around for a while. One notable is Arnold Schwarzenegger’s 1987 classic The Running Man. So a lot of The Hunger Games has been done and redone before and nobody owns the idea.

That said, whoever made the Hunger Games films undeniably had a copy of Death Race 2000 on their shelf. Maybe the presenters from this classic’s TV sequences just happen to share that same glib awfulness that the aristocrats in Hunger Games also seem to possess. You really hate their insincere grinning mugs and condescending comfort with what they are doing. You’d love to strangle those expressions off their face.

Adding no sympathy to their cause is that they prop up a seemingly benign dictatorship masked as liberty and they encourage participation in a televised sport where winner takes all and the losers die. If you think I’m still talking about The Hunger Games, I’m not. That’s the plot for Death Race 2000.

But don’t get me wrong. The Hunger Games is way classier than Death Race 2000. It’s just interesting how the two films seem to think alike, except that Hunger Games is more slick action with introspective moments, while Death Race is about crushing heads under tyres. The main bad guy has a giant hunting knife strapped to his hood. Despite their similarities, I don’t see these two hooking up.

If you think I just wrote an entire essay about The Hunger Games, you got me. Death Race 2000 doesn’t need any motivation to watch. It’s perfect Seventies nonsense that is every kind of retro-cool forty years later. It has Rambo and Kill Bill Bill in it. It’s got stupid cars, stupid people and a lot of violence (for its day). It’s one of the few movies with ‘2000’ in the title that doesn’t suck. It was produced by Mr Cult Movie himself, Roger Corman.

Death Race 2000 was a violent, almost-pointless action movie that offended just about any reasonable adult that saw it.  Really, is there any higher praise than that?

Cinophile is a weekly feature showcasing films that are strange, brilliant, bizarre and explains why we love the movies. 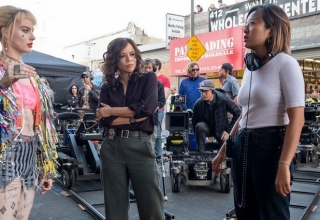 Birds of Prey may not have lived up to box office expectations, but it still had plenty of positive surprises and breakout director Cathy Yan addressed both the highs and lows of working on the DC Comics film.