Horror movie franchises have a habit of knocking out sequels every single year which I guess is designed to capitalise on the brand while it’s hot and prevents others from copying your formula too quickly. However, it also means that you hit franchise fatigue quickly and makes it harder for every subsequent movie to meet expectations. That means that Blumhouse and Platinum Dunes’ The First Purge, had the odds stacked up against it from the start. But that hasn’t stopped them from trying. 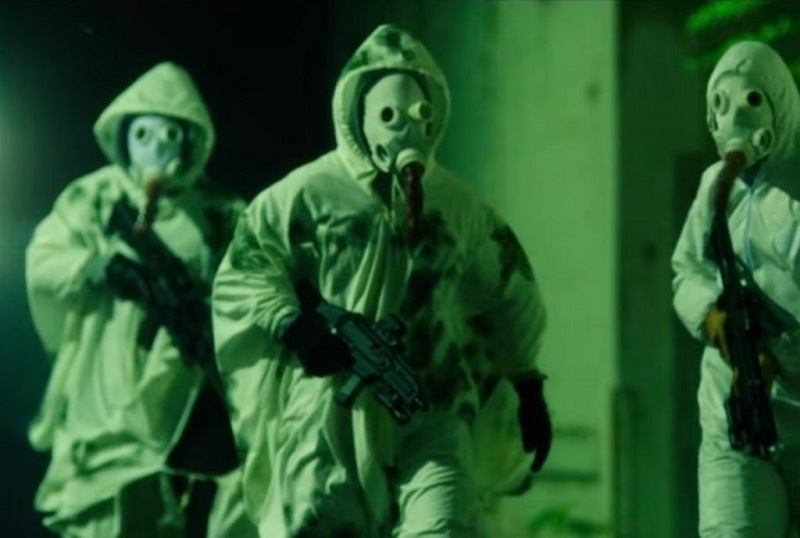 However, if there is one thing the Purge has going for it which few horror films do have its that it has a stinging political message which gives it added gravitas and relevance to all those on-screen scares and brutality. This fifth iteration of the franchise serves as a prequel to all the previous films and tells the story of the experiment that led to the Purge becoming an annual national event should be the most poignant and politically relevant of all and give this film an edge. So, does it pull it off?

Unfortunately not, though it certainly tries hard. And it does this by changing up the formula slightly, though not entirely deliberately by instead becoming a straight-up action comedy of sorts. While the Purge series has never been about absolute horror and is a little more action-focused, this prequel ups the ante on the last part and provides something that you expect from the likes of Michael Bay, but with much less of a budget to work with. Ironic, considering that Bay himself serves as one of the film’s producers. It’s not just the big action scenes that make you think of a Bay movie though, but the crass and at times silly dialogue, scantily clad women who need a man to save them, cheeky and offensive humour, over-use of American military and more images of the American flag than you really need. I wonder if Gerard McMurray is not a pseudonym for Michael Bay himself. 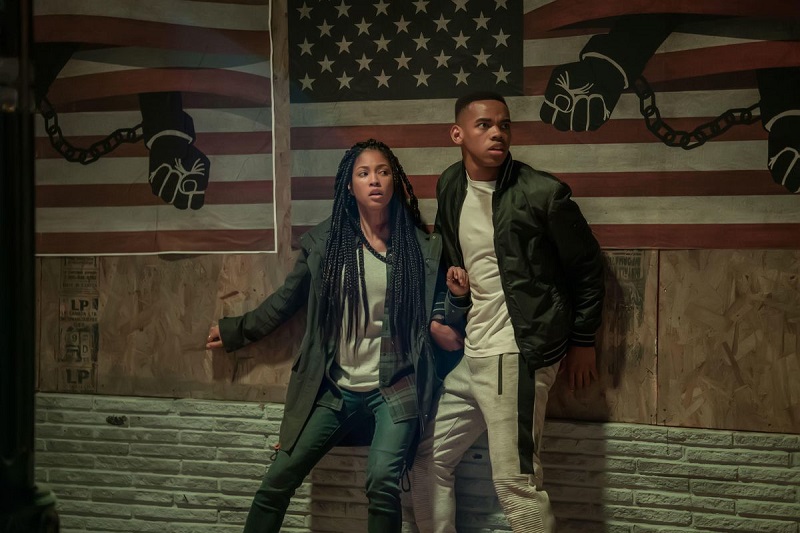 This movie does have a bigger feel to it though than previous films, and director Gerard McMurray is not afraid to be more bombastic and explosive here. For his part, he at least executes these moments of the film really well and along with editor Jim Page ensures that the film never feels too dull, even in its somewhat subdued start. You get a sense though that some of the comedic moments in the film are perhaps unintentional because you end up laughing more through the silliness of some of the dialogue and actions of its characters than from anything genuinely funny.

It could also arguably be the shallowest iteration of the series, as it wastes much of the psychological and political subtext for cheap-thrills instead.  That been said, its action beats and humour are particularly effective and it keeps you relatively entertained despite these flaws. As for the cast, which includes Y’lan Noel, Lex Scott Divas, Joivan Wade, Mugga (that’s her name), Lauren Valez, Patch Darragh and Marisa Tomei they are all undoubtedly capable, though given they all play very stereotypical and shallow characters, you can’t read too much into them. 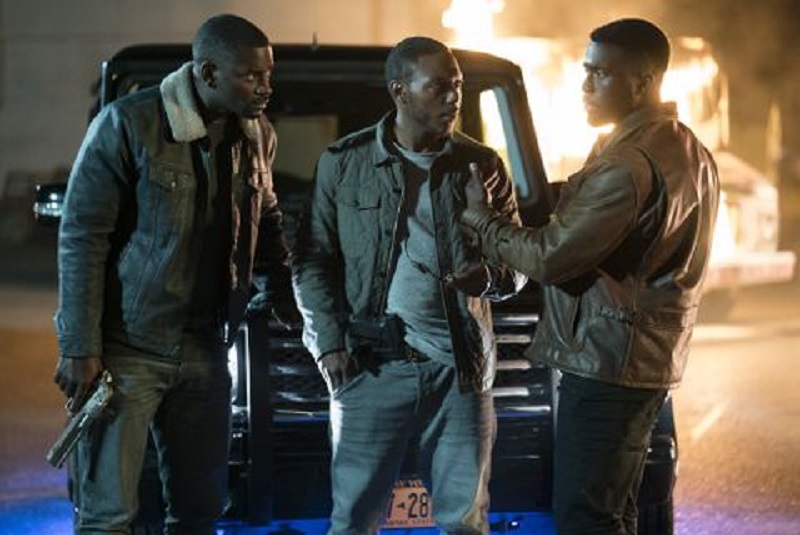 The First Purge starts off by trying to uncover some of the psychological and political decision-making that led the U.S. down this path and find a need for people to kill each other off. It starts with a great opportunity to explore the depth of this dark and traumatic event. It also has the perfect setup for exploring race and inequality as this first Purge experiment takes place in a predominantly poor and black suburb where it’s clear that the politicians have alternative objectives to maintaining population control and aren’t just looking to promote psychological health. And although there are brief glimpses of the film which try to ponder these points and perspectives in a little more detail, it forgoes most of that and rather serves you up something generic instead. 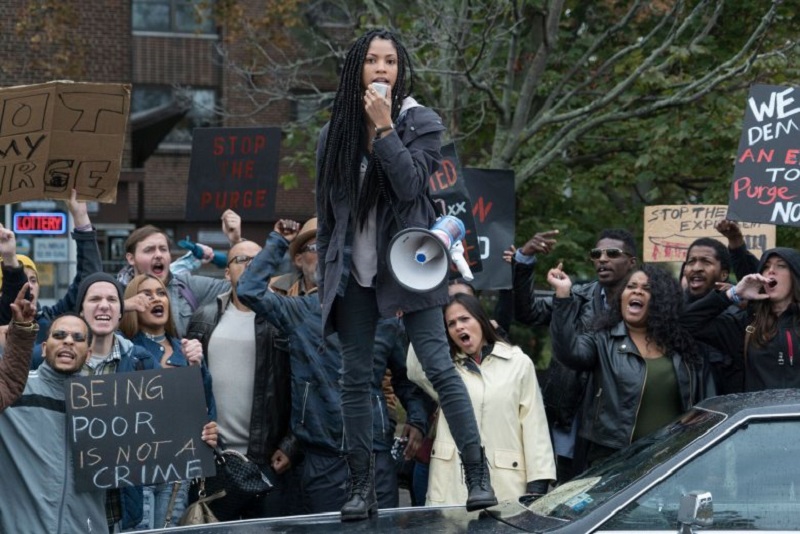 Which is a pity because there is a lot of subtext that is crying out to be explored. I do understand that this is perhaps out of place for a horror/action movie like the Purge series, but it just feels like a wasted opportunity, and it feels like a step backwards for a series which offered something a little deeper for horror movie fans. It’s something the series has always hinted and promised but failed to deliver. And franchise creator and writer James DeMonaco just doesn’t seem interested to oblige this need and prefers to just stick to popcorn entertainment instead.

It’s not all shallow and empty though, and there are some nice story elements, especially Noel’s Dmitri who plays a local gangster who ends up being the movie’s main hero. That he is at his core, set up as more of a villain, makes for some particularly ambiguous moral juxtapose, but one that you are unlikely to focus too much on as the movie would rather just have him shoot bullets and blow stuff up. 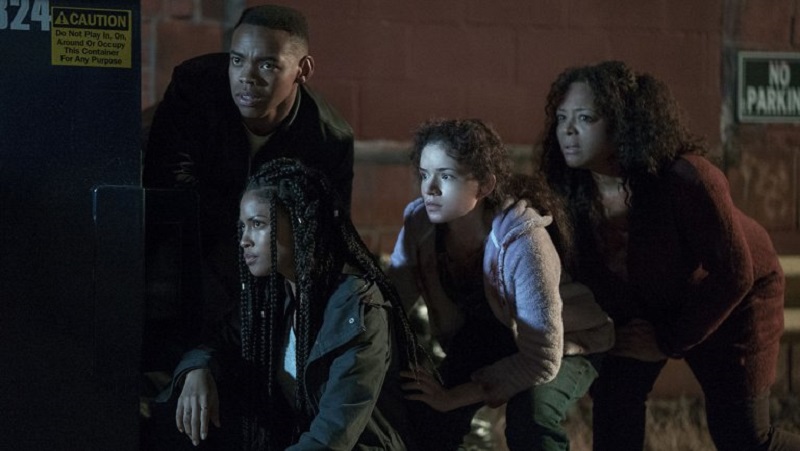 The First Purge is entertaining enough to keep fans of the series interested without blowing them away but is probably not going to make someone want to watch the rest of the movies if this is their first exposure to the franchise. As a thought-provoking horror movie, it falls flat, but as an action comedy, it does enough and it’s perhaps easy to understand why it was such a huge hit in the US.