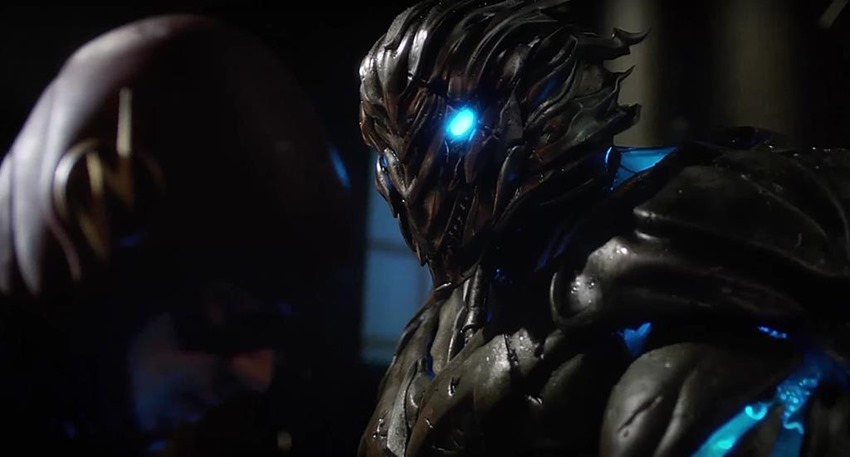 For a show that loves speed, The Flash sure does like to take the slowest route possible when it comes to revealing the big bad of the season. The debut season of The Flash has been fixated on speedster final bosses this year, starting with the Reverse-Flash first, continuing with Zoom in season 2 and then progressing to the so-called God of Speed known as Savitar in the current series.

Savitar has been unlike any other opponent faced so far however. Quicker than the Flash on even his best day, Savitar is a tank with the engine of a Speed-Force Ferrari. Unstoppable, he’s a constant reminder to Barry that he will make his life a living hell when he kills Iris West in a fixed moment in time. So who the hell is he? We’ve got several suspects below. And odds on each of them, ahead of the reveal this week as to the identity of the ultimate speedster.

Want to take part? Drop a nondescript envelope of money behind the sewerage pipes at Critical Hit HQ and we’ll probably get back to you*. Some spoilers below. The Barry Allen of the future is kind of…well he’s kind of a giant mopey turd. Still connected to the Speed-Force and apparently the entire catalogue of My Chemical Romance, Barry sulks around the ruins of STAR Labs as he waits for the day that he can afford a decent haircut. While the death of Iris West may have been too much for him to handle, it still seems like a cop-out. After all, he managed to survive seeing both of his parents murdered, living to run another day.

There has to be more to that one fateful night that saw Iris slain. A reveal as to who Savitar truly is, that shattered the resolve of Barry and sent him into hiding for several years. In last year’s Invasion crossover, it was hinted at that an even older version of Barry was not to be trusted. A scarlet speedster who had finally snapped and went mad. Seeing as how Savitar claims to have created himself as well, that ties in pretty well to the night that Barry got his powers.

Even more fuel? Barry’s various time remnants. Could one of them have gone mad thanks to the shenanigans of the Flashpoint reality that replaced the traditional timeline that The Flash spent its first two seasons in? Maybe, because uh…science! Anyway, I kind of like the idea of a future revenge-runnin’ Barry going full cuckoo. No one ever truly dies, and that goes double in comic books and TV. Eddie Thawne deserved a better fate in the first season of The Flash, but instead found himself relegated to a supporting role where he found himself caught between the morality of upholding the law and allowing a vigilante to operate outside of it.

Eddie died a hero however, sacrificing his own life to stop his future descendant Eobard Thawne from ever having existed by inserting a bullet into his own heart at point-blank range. While Eddie seemingly perished, his body was also sucked into a time vortex. Who knows what effects that had on him? Possessed by a time wraith? Restored to life by wibbly wobbly science? Seeing as how Savitar is obsessed with all forms of time, Eddie could be the man inside of that speedster armour. Yes, Eobard may be dead. Again. Finally. But time isn’t exactly linear with this persistent foe of The Flash. Seeking to escape a fate worse than death in DC’s Legends of Tomorrow, Eobard was finally defeated and properly erased from history along with his army of Time Remnants in the finale of the second season.

At least that Eobard was. With all of time at his beck and call however, we’ve yet to see much of a younger version of the greatest nemesis of The Flash, who has already managed to kill Barry’s mom. Twice. Adopting super-advanced armour from the future and running circles around the fastest man alive yet again as he prepares to take another person close to him? Mere child’s play for the future-genius. What kind of a brother wants to kill his own sister? A really twisted one we reckon. One who feels that after years of being sidelined and treated like a sidekick, the time to shine was finally his. With a future version of Wally West shaken after an event that saw him clash with Savitar, one wonders what really went on that night. Catatonic and stuck in a wheelchair, it’s not the first time that The Flash has faced a nemesis who prefers to be perceived as weak when he happens to be a deadly nemesis.

It’d be the ultimate act of revenge, although the motivations would require some super-speed shark-jumping most likely to see this through. Wally has a connection to Savitar however, and if the god of speed is more entity than actual man, you’d imagine that he’d be able to possess the younger West and make good use of his superior speed to run rings around Barry Allen. Savitar did claim to create himself, remember? This kind of makes sense. A bit of a stretch this one, but hear me out. Caitlyn Snow is gone, her mind consumed by the Killer Frost personality brought on by her powers. She’s as cold as ice, her puns for anything sub-zero being non-existent and she’s more than ready to shove an icicle into the chest of anyone who gets in her way. She also happens to know who Savitar is, as her reaction to seeing the god of speed resulted in her instantly swearing loyalty to him.

That means that a familiar face is behind the armour. Who better than the former Firestorm himself, who seemingly perished in battle? It would require one hell of a stretch to have Ronnie adopt a new set of powers, but combined with the organic armour and possible madness, Deathstorm could transition from hero to nemesis easily enough. If 52 other Harrison Wells exist, then you can be dead certain that a death-obsessed version of the familiar face has decided to take his creative murder-writing to the next level for his series of novels. Probably. Maybe.

Odds: All of the coffee at CC Jitters-1