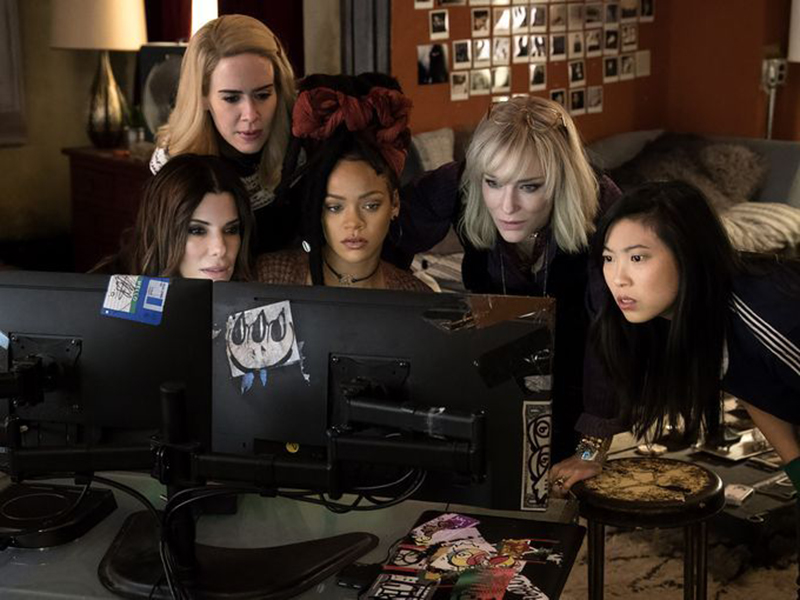 The all-female reboot fad has to have been one of Hollywood’s most short-lived streaks of fancy. Thanks to the lukewarm critical response and downright frigid commercial reception of Paul Feig’s Ghostbusters reboot, the trend was pretty much one and done. Well, not quite. Maybe they saved the best for “last”?

Ocean’s 8 is the upcoming spinoff from Steven Soderbergh’s beloved Oceans trilogy (which themselves were actually remakes of classic Rat Pack ensemble pieces) which now sees George Clooney’s Danny Ocean out of the picture as his sister, Debbie, played by Sandra Bullock, proves that big bro is not the only member of this family with a knack for depriving people of their possessions. Soderbergh is just handling producer duties this time around as his good friend Gary Ross (of The Hunger Games, Seabiscuit, and Pleasantville fame) directs off a script he co-wrote with Olivia Milch, and Ross definitely seems to be ticking all the boxes.

As we can see from the latest trailer, everything is slick and breezy, just like an Ocean’s movie should be, and Bullock leads a star-studded cast which includes Cate Blanchett, Sarah Poulson, Rihanna, Mindy Kaling, Awkwafina, Helena Bonham Carter and more. Rumour has it that some of the old boys from Soderbergh’s trilogy will be popping up as well, but these will just be cameo appearances as the ladies will be running the show here. Or rather, robbing the show as the crew is after a diamond-studded necklace worth $150 million worn around the neck of A-list actress Daphne Kluger (Anne Hathaway) at the prestigious Met Gala. Game on!

Five years, eight months, 12 days…and counting. That’s how long Debbie Ocean (Sandra Bullock) has been devising the biggest heist of her life. She knows what it’s going to take—a team of the best in their field, starting with her partner-in-crime Lou Miller (Cate Blanchett). Together, they recruit a crew of specialists: jeweler Amita (Kaling); street con Constance (Awkwafina); expert fence Tammy (Paulson); hacker Nine Ball (Rihanna); and fashion designer Rose (Bonham Carter). The target is a cool $150 million dollars in diamonds—diamonds that will be around the neck of world-famous actress Daphne Kluger (Hathaway), who will be centerstage at the event of the year, the Met Gala. The plan is rock solid, but everything will need to be flawless if the team is going to get in and get away with the ice. All in plain sight.

Yesterday, in anticipation of the trailer release, the official @Oceans8Movie Twitter account actually tweeted out a series of short vids that gives more of an introduction to the individual members of this crew. Check them out below.

No heist movie is complete without diamonds ?? say hi to your new girl Amita #Oceans8 pic.twitter.com/FAMWrzGiUI

Ocean’s 8 also stars James Corden, Richard Armitage, Carl Reiner, and a small army of celebs from Dakota Fanning to Kim Kardashian to Anna Wintour who will all be playing themselves as guests at the Met. The film is scheduled for release 8 June.