Home Entertainment It's on! The MAN OF STEEL sequel will see a Dark Knight return

Are you having a bad start to your Monday? Does your mind yearn and ache for some good news to start this week with? News of such a high magnitude, that you’ll be spending the rest of your day with the biggest smirk on your face?

We’ll I’ve got some news for you, fellow geeks. Man of Steel has been a box office success, and a sequel was fast-tracked quicker than a speeding bullet. But the man of steel won’t be alone when he returns to the box office. He’ll be teaming up with his legendary polar opposite, because after years of rumours and false-starts, the World’s Finest will finally be hitting the big screen. You have my permission to squee now.

Over at Comic Con, which is now more about big movies than it is actual comic books these days, Man of Steel director Zack Snyder took the stage at the DC Comics panel, telling moderator Chris Hardwick to stand aside. Snyder said, “I’m gonna take the lectern from you, because some shit’s going to happen up here.”

It’s official that we are going to make another Superman movie. And you say, Zack, what is the movie about? But you don’t want me to tell you that. You want to go and see the movie. But I can say that maybe there’s a single element that will be in the film that I could… help you out with. I was thinking about how to do that. I pored through the DC Universe to look for a way to tell this thing. We’re writing the thing now, but I came across a thing I found that’ll help you understand it.

At which point Harry Lennix, who played General Swanwick in Man of Steel, threw on some gruff vocals to read the following piece of dialogue:

Now I get that a bunch of you aren’t diehard comic book fans, and I forgive you for that. But to understand what that dialogue means, you have to fish out a comic book with a rather high reputation and flip the pages over to find it. It’s a comic book that was recently adapted into a two-part animated film that goes by the name of …The Dark Knight Returns. In it, an elderly Batman wages one final battle with Superman himself, using every single trick in his arsenal to beat him to within an inch of his life.

So is Zack Snyder directing a live action version of that classic comic book tale? Yes and no. No, that’s not happening. Instead, Snyder will be directing a new tale starring the two heroes at odds, that will take several cues from that story. A Snyder himself said:

We’re not adapting this thing, but it is the thing that will help us tell that story.

So expect Supes and Bats to exchange blows at some point in this flick. And after watching Man of Steel, I have no idea how even Batman can stand up to a man who could hit you with the force of a ten megaton P-Klap simply by staring at your cheek.

The film has no official title yet, but Snyder did confirm that this was the actual sequel to Man of Steel, and that Henry Cavill, Laurence Fishburn, Amy Adams and Diane Lane would be back. No one has been cast yet for Batman, and it’s highly doubtful that Christian Bale will return.

But from a competitive standpoint, this move makes sense. There’s no doubt that DC and Warner Bros want to set up their own Justice League film in the future, but after seeing how Marvel pulled it off, they’ve got to go in their own direction. So why set up a dozen origin films, when a team-up epic could work just as well?

It’s some damn exciting news, and hopefully, Snyder can inject a little bit more soul into this film, while keeping a technical standard that is high, or higher, than the one demonstrated in the first Man of Steel. As for those other DC characters waiting for their own films, tentative plans are now in place for the Flash to speed into cinemas sometime in 2016, while the Justice League will make a big screen appearance in 2017. 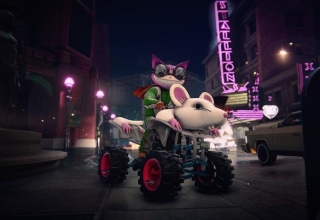 Nine years after release, publisher Deep Silver is digging Saints Row The Third up for a new remaster that gives the game a whole new bunch of bells and whistles to show off.