Before Chadwick Boseman was saving the nation of Wakanda and being a beacon of diversity and equality by starring in Marvel’s first black super-hero movie, he was playing an iconic black lawyer who was fighting for equality in the American justice system in this movie Marshall. And much like Black Panther made a bold statement for Boseman’s status as a leading man in Hollywood, Marshall cements his acting ability as he offers up a discernibly different, but powerful performance in this film. 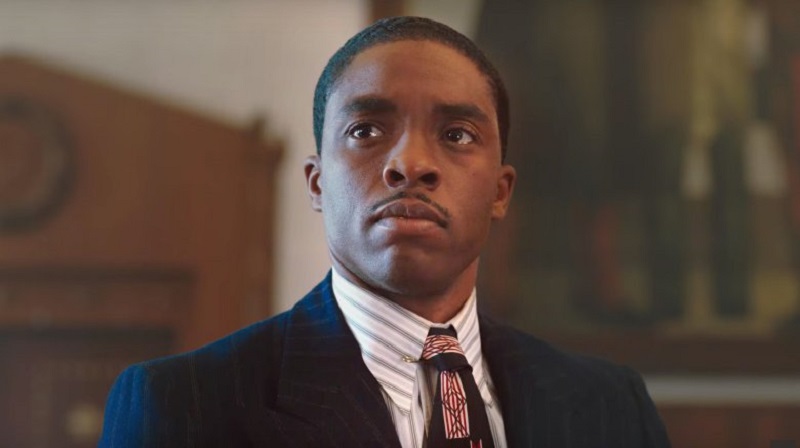 In fact to call Marshall the “Boseman show” is perhaps apter here than in many of his other previous acting roles. While he is still capably supported here by the likes of Josh Gad, Dan Stevens,  Kate Hudson and Sterling K Brown, its Boseman’s charisma that oozes through this powerful period piece and he indeed does own pretty much every scene he is in. He is convincing in the way he delivers on his characters passion for freedom and liberty and his delivery of the performance only builds on some superb scripted dialogue from Michael and Jacob Koskoff.

And it’s that passion and the timing of this film’s release that perhaps makes Marshall such a compelling and effective film. Given the relevance of black equality in the world today this movie is not only very topical, but strikes all the right notes in not only telling its story but in challenging conventions and reminding us that although we have come a long way, the fight for equality is not yet over. 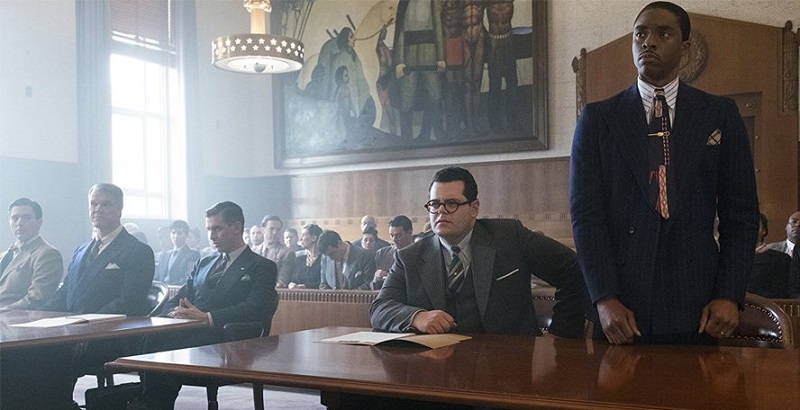 The film certainly doesn’t hide from its political intentions, but at the same time, doesn’t get distracted by these and remains firmly focused on the case at hand. That case being a controversial trial that sees Boseman’s Thurgood Marshall called in by the NAACP (National Association for the Advancement of Coloured People) to defend a black man (Brown) who has been arrested for the rape and attempted murder of a white women (Hudson) in a white part of the country. . Things get a little pear-shaped when Boseman’s character is denied a license to try the case for the accused and instead he has to rely on Sam Friedman (Gad), a Jewish attorney with no previous criminal experience, to be his mouthpiece. The pair is up against a ruthless state attorney (Stevens) who is not holding back in his desire to win the case. Throw all this into the backdrop of a society deeply conflicted by race, a world in the midst of the beginnings of World War 2 and the added racial prejudice it gives to Friedman as a Jewish attorney along with the gruesome nature of the case and you have the backdrop for a gripping courtroom drama. 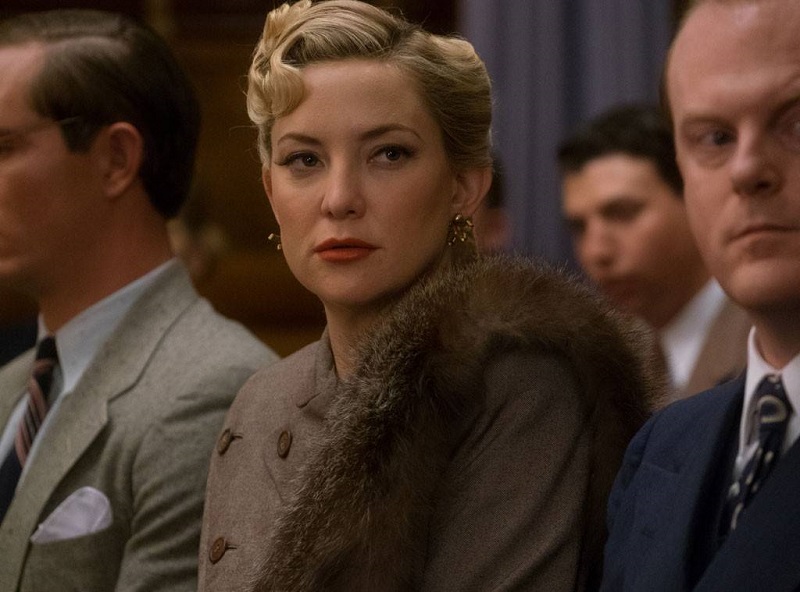 Though, it’s perhaps not as gripping as it should be, despite a great attempt. The film starts off with you convinced that Boseman’s character is going to be the hero of the day and at no point do you ever doubt this. That is perhaps one of the weaknesses in the film as it lacks that great mystery and intrigue that many courtroom dramas have in knowing whether a person is guilty or not. Now, yes, it is based on a true story of which we know the result before watching the movie so we should expect this to a certain degree. However, the film could still have built more ambiguity and uncertainty into the plot as it unravels the more delicate details of the case and barely builds surprise into its different plot turns. The film ends up becoming too predictable and light on tense moments as a result.

It means that the film plays out like a robust courtroom drama, but loses some of its bite as it’s all too safe and predictable. Given the gritty nature of the crime and the racial prejudice of the time, this was the perfect opportunity for some gritty filmmaking, but it seems that director Reginald Hudlin was trying to play it safe with this film instead of play on  viewers’ emotions, which is a pity. 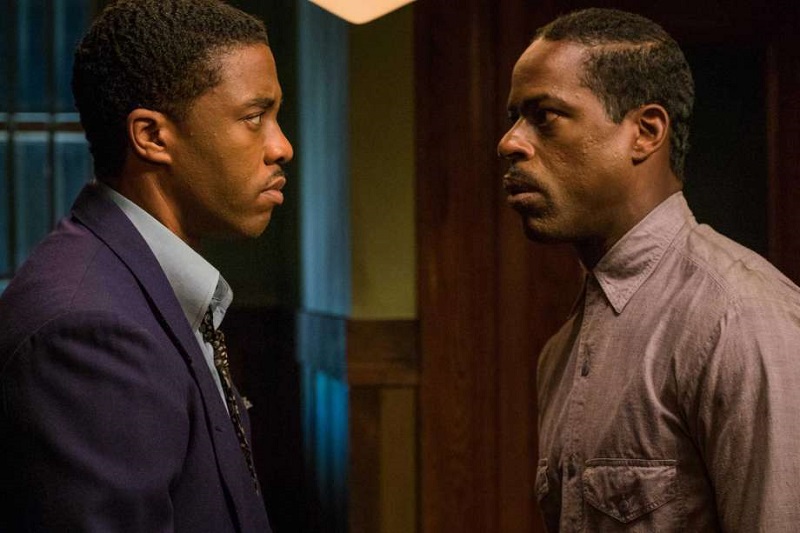 Indeed, the film’s strongest moments are arguably in those courtroom scenes where the case is brought together. Much of the story that takes place outside of the courtroom that explores the lives of the characters a little more and the pressures they are facing in going to trial with this controversial case are a lot less exciting.

This is through no fault from the actors though who most certainly play their parts in bringing the story to life, but fall primarily with the direction by Hudlin which can be a little bland at times and the predictability as mentioned earlier which is only made evidenced by editing which perhaps doesn’t hide enough. As for the other aspects of the film, like its jazz-inspired score, art direction and sharp cinematography, these are all excellently executed and what you would expect of a high-quality film. 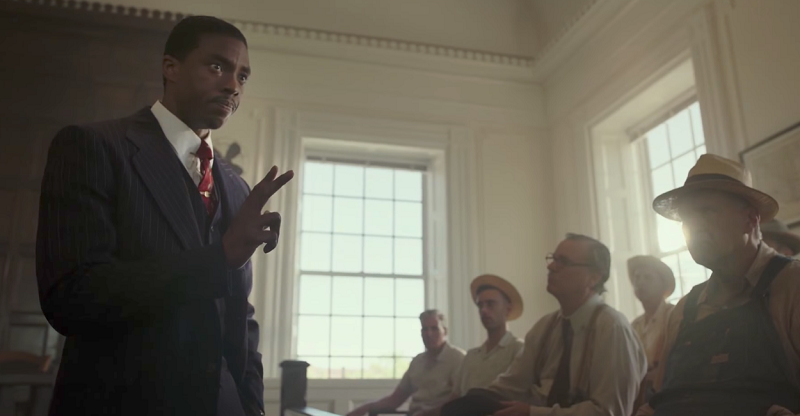 Marshall is a film with all the hallmarks of greatness and thanks to some exceptional acting, a sharp script and superb production values, it is indeed a thought-provoking and watchable film. It ends up playing a little too safe though and holding back on the grittiness of its subject matter which prevents this otherwise excellent film from achieving that greatness.