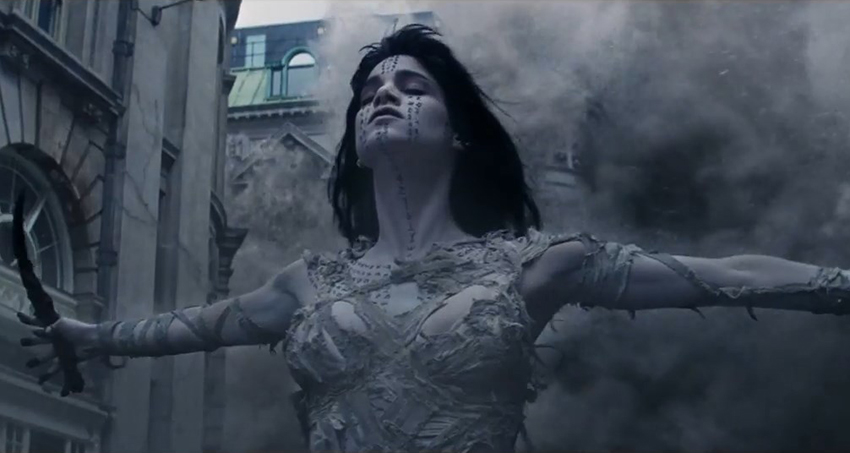 While I’m definitely not a horror fan, I like the look of the action horror blend that the upcoming The Mummy reboot seems to be targeting. We get to see some more of that in the latest international trailer that dropped recently. For those of you’ve who’ve missed it, the official plot synopsis is as follows:

Thought safely entombed in a crypt deep beneath the unforgiving desert, an ancient queen (Sofia Boutella) whose destiny was unjustly taken from her, is awakened in our current day, bringing with her malevolence grown over millennia and terrors that defy human comprehension.

From the sweeping sands of the Middle East through hidden labyrinths under modern-day London, The Mummy brings a surprising intensity and balance of wonder and thrills in an imaginative new take that ushers in a new world of gods and monsters.

During a recent interview with Entertainment Weekly The Mummy/Ahmanet herself Sofia Boutella and director Alex Kurtzman handed out a few more slivers of information on the titular character.

Kurtzman said of Ahmanet that she’s “a woman who wasn’t content to be put in her place and wanted something more.” What she wanted, in this case, is what she felt was promised to her and then had ripped away. She was groomed to be Egypt’s next pharaoh but when her father was given a son he went back on that promise, which is what led her down the dark path and ultimately to her cursed existence.

Having a monster that we can understand and empathise with is something I, and I think most people, will enjoy seeing in the movie because it adds depth to what we’re watching and makes the monster a more tragic figure.

Boutella also revealed that she’s spent a fair amount of time researching Egyptian history and mythology in order to bring a bit of realism to her character’s behaviour, going on to say that “these people never shouted. They were the most powerful people, but they were just calm.” Well if the trailers are anything to go by things won’t stay calm for very long.

We’ve also known for a long time that The Mummy is the new cornerstone of Universal’s shared monster universe, and as we’ve seen in the trailers one half of Russel Crowe’s character, Dr. Henry Jekyll, makes an appearance. We shouldn’t expect any more though, with Kurtzman saying:

“The movie’s called The Mummy, not The Mummy Meets 12 Other Monsters. If we create a world that feels interesting and scary, then we will have succeeded in setting up the larger universe.”

That’s something I wholeheartedly agree with – shared movie universes need to be earned, not assumed upfront. While they do need to plan ahead for potential universes, they do need a successful first movie to make it happen. Remember Dracula Untold?

The Mummy is due to open on 9 June.