There are two schools of thought about all-women remakes, sequels and spin-offs of films with a traditionally male cast. The first is that it’s about time the ladies get a look-in, and take centre stage instead of merely lurking in the supporting line-up. The second perspective is that these ventures are lazy lip service from Hollywood; an attempt to appear like they’re changing their ways regarding gender representation. People in the second camp insist that it would be far more progressive to tell original stories with an all-female cast instead of just wallpapering an existing franchise with women. 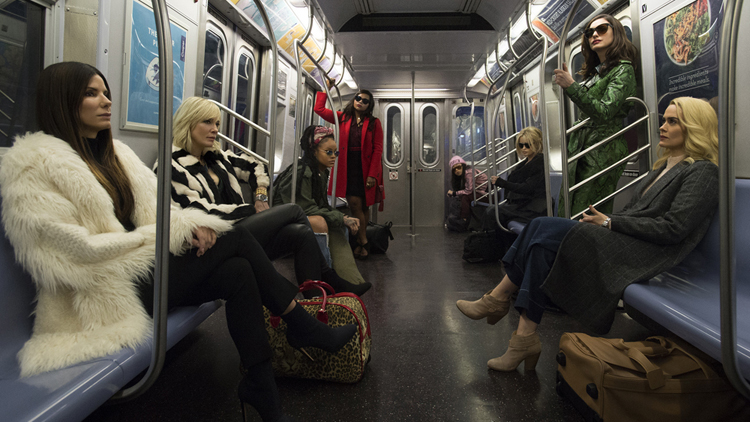 Now, with this in mind, how does glossy heist movie Ocean’s 8 fare? Does it manage to stand alone and assert its own identity – legitimately furthering the case for more female ensembles in mainstream Western cinema? Is it an all-round, watchable and entertaining success? Or is it another Ghostbusters for the fanbabies to disdain?

A spin-off from Steven Soderbergh’s Ocean’s trilogy (which began with a remake of the 1960 Rat Pack classic), Ocean’s 8 is directed by Gary (Pleasantville, The Hunger Games) Ross and centres on Debbie Ocean (Sandra Bullock), the sister of George Clooney’s character from the earlier Ocean’s films. Fresh out of prison, Debbie immediately teams up with her old partner Lou (Cate Blanchett) to steal a $150 million Cartier necklace, orchestrating for it to be worn by vapid actress Daphne Kluger (Anne Hathaway) at New York’s upcoming Met Gala. To pull off the heist, Debbie and Lou must assemble a crew, including Helena Bonham Carter’s fashion designer, Rihanna’s hacker, Sarah Paulson’s fence, Mindy Kaling’s jewellery maker and Awkafina’s pickpocket. Commence intricate planning, on-the-fly problem-solving and the appreciable elegance of an intricate scheme in action. 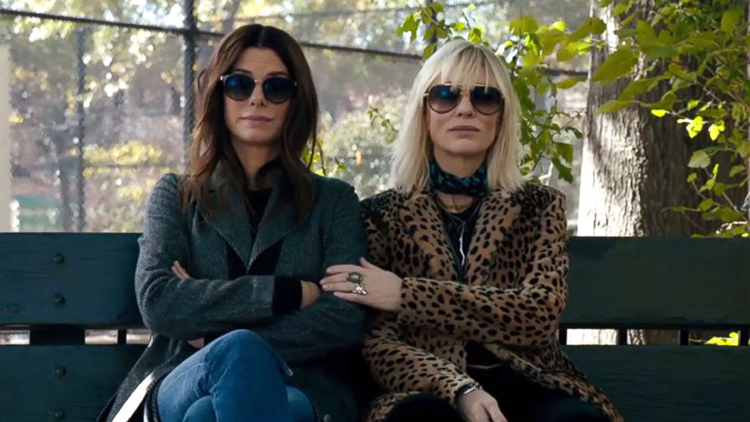 And, make no mistake, Ocean’s 8 is all about the style. Ticking off every expected heist movie requirement, it’s slick, it’s breezy, it has a naughty sense of fun, and its cast is never tripped up by conscience. Although each character has different motivations, it’s refreshing to see a screenful of women who don’t agonise over their illegal actions, or have to be “nice” in any way. They’re likeable because of their matter-of-fact attitudes to rule-breaking.

In addition to each actress having their own moment to shine, there’s quite a bit of playing against type in Ocean’s 8. Bullock discards her usual uptightness to portray Debbie as a quick-witted, confident crook, and Anne Hathaway goes all in as a self-absorbed starlet. Bonham Carter provides a hefty dose of eccentric and anxious comic relief, but special shout-outs must go to Rihanna’s perennially cool Nine Ball and Awkafina’s quirky Constance. There’s a throwaway scene where Constance shows Kaling’s Amita how to use Tinder, and you wish Ocean’s 8 had included more of these warm, intimate moments between its women to convey their obvious camaraderie. 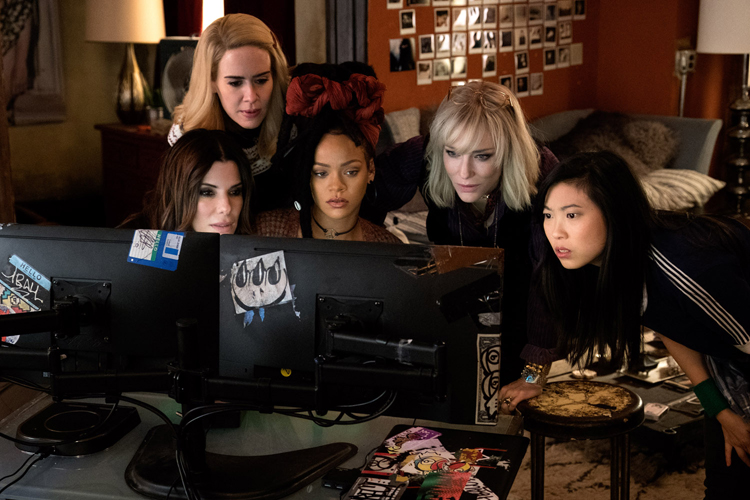 There’s no problem with the cast then. What lets down Ocean’s 8 is the ease of it all. While there are certainly complications along the way, the big fence seems to go off without much of a hitch. It’s all too easy. Even worse, the film doesn’t end on a high with its record-breaking theft. There’s a further 20 minutes or so of screen time post-heist, which really sucks energy out of the movie.  It’s like watching someone slowly descend a mountain after reaching its peak. You no longer care. Twists and revelations get needlessly layered on at this point, along with the arrival of a character you could really do without. It’s an epilogue that feels like it belongs in another movie, and comes across as a miscalculated inclusion.

In the end then, Ocean’s 8 is a mixed bag. The film absolutely stands on its own, as its own entity, whether you’re familiar with the guys’ Ocean’s trilogy or not. You appreciate, and you frequently chuckle, but it’s mostly from an aloof standpoint. You never really find yourself invested in, or thrilled by, the events onscreen even while you enjoy the fact that this colourful band of crooks is all women, and is being portrayed by some amazing female talent. Ocean’s 8 does its job as popcorn flick, but it’s a little disappointing that in the end it’s more slick and superficial than something truly special.