Home Entertainment The six most shocking moments of Wrestlemania 34 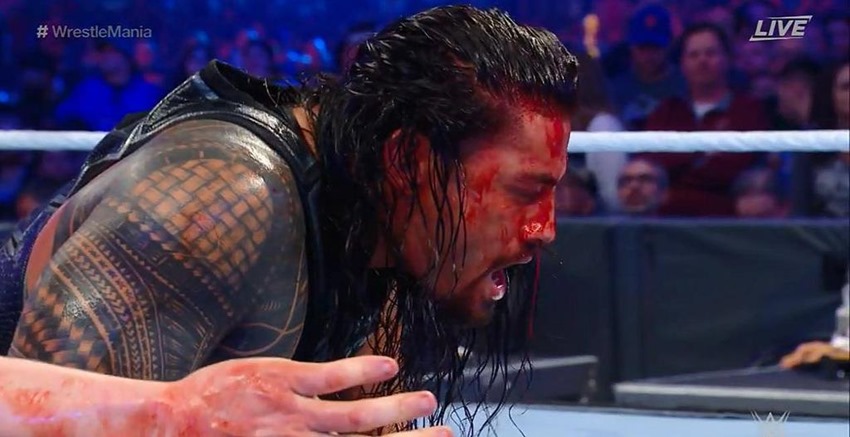 Wrestlemania! It only comes once a year, but it’s always well worth the wait. Wrestlemania events do tend to be a tad bit predictable however, with most shows following a simple formula that ends with a main event where the Royal Rumble winner is crowned champion over the dastardly villain who hampered him at every turn.

This year’s edition however, felt fresher than ever. It was a night of shocks and twists, that saw many an expected match end in a decisively different outcome than what fans had placed their money on. Here’s a look, at the six most shocking moments from Wrestlemania 34.

The end of Asuka’s streak 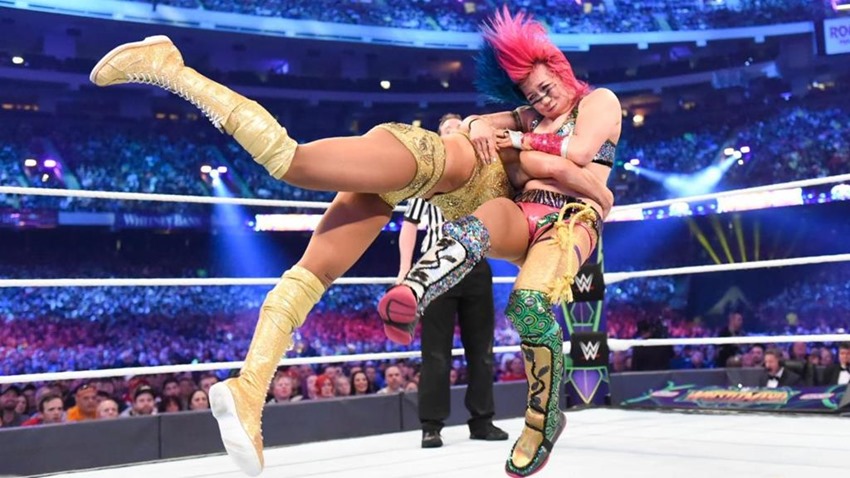 If ever there was a superstar who helped remind the world that the WWE women’s division was filled with top-rope talent that could easily bury the Divas era without even breaking a sweat, it was someone like Asuka. In an industry that saw immense new titans emerge in the women’s revolution such as Charlotte Flair, Bayley and Sasha Banks, it was Asuka who held the greatest prize of them all: A legendary undefeated streak.

A streak that had lasted for over two years and saw 267 wins under Asuka’s belt. A streak…that was finally broken by the queen. It’s a booking decision that I’ll never understand, and to see Asuka’s road to Wrestlemania crumble after an impressive win in the Royal Rumble to an established performer such as Charlotte Flair was devastating to say the least. Even more heartbreaking? That post-match embrace, as Asuka summed it up in six words: 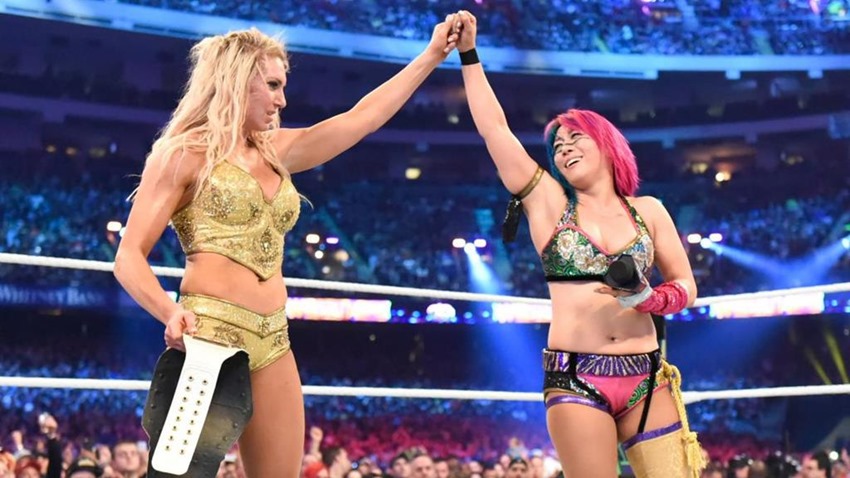 “Charlotte Flair was ready for Asuka”.

What is Braun Strowman? He’s a gift of destruction, a monster amongst men and quite simply: An entire tag team division on two legs. Braun Strowman is the reason why dinosaurs don’t dominate the food chain, Braun Strowman is why meteors actively avoid our planet. What Braun Strowman couldn’t break with those massive hands of his however, was the rules of his tag team match against Sheamus and Cesaro.

Strowman’s solution? Grabbing a member of the WWE Universe (who just so happens to be the son of a match official), and having him stand on the apron as his impromptu tag team partner. It was a heartwarming moment, and while the reign of Strowman will most likely be short and sweet given the arrival of NXT’s Authors of Pain on the RAW roster, it was still a wonderfully surprising showdown in Wrestlemania history. 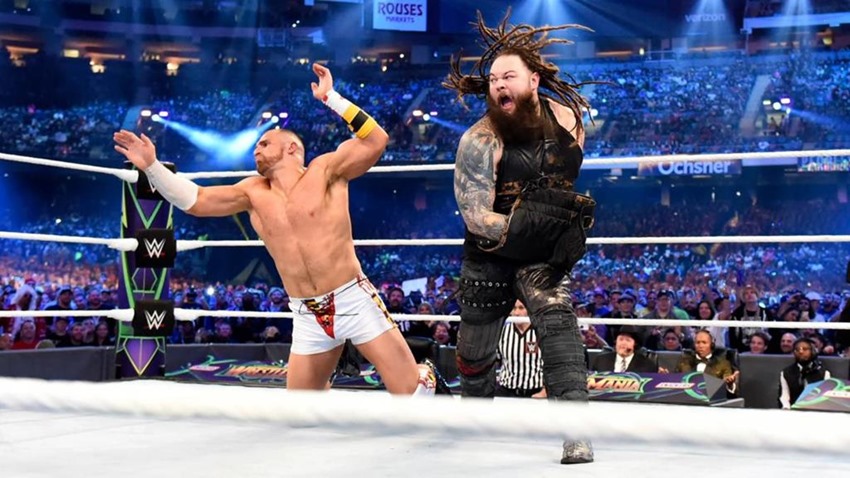 When it comes to weird, Woken Matt Hardy is more bizarre than a bag full of millennial discussing the merits of Nietszche. Don’t even try to comprehend how so many Millennial got into the bag or why they’re having a philosophical discussion, just don’t. Anyway, even with his Woken wisdom powering him, Hardy soon found himself outnumbered in the Andre The Giant Battle Royale. His last-minute saviour? None other than Bray Wyatt himself, who was cleansed of the spirit of Sister Abigail and was more than willing to assist the Woken one. 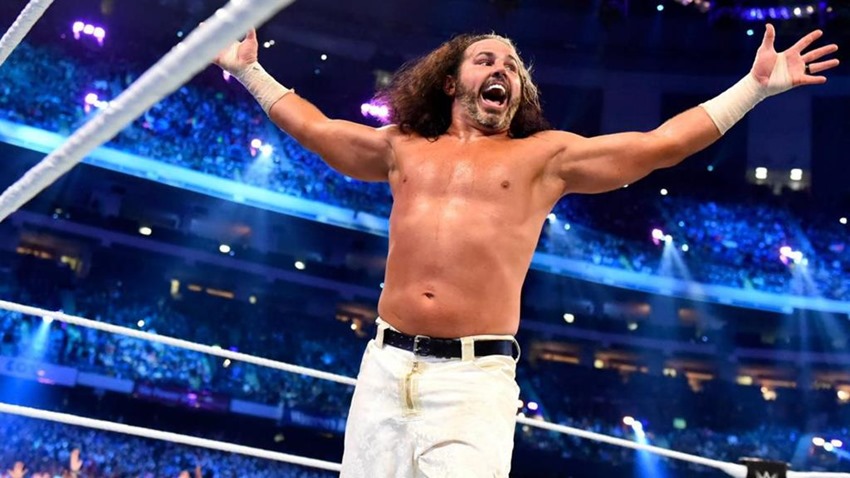 It’s an alliance that is truly weird, and I can’t wait to see how it operates now that Hardy has PROCURED Andre himself and is deadset on conquering the tag team division.

John Cena gets utterly buried by the Undertaker 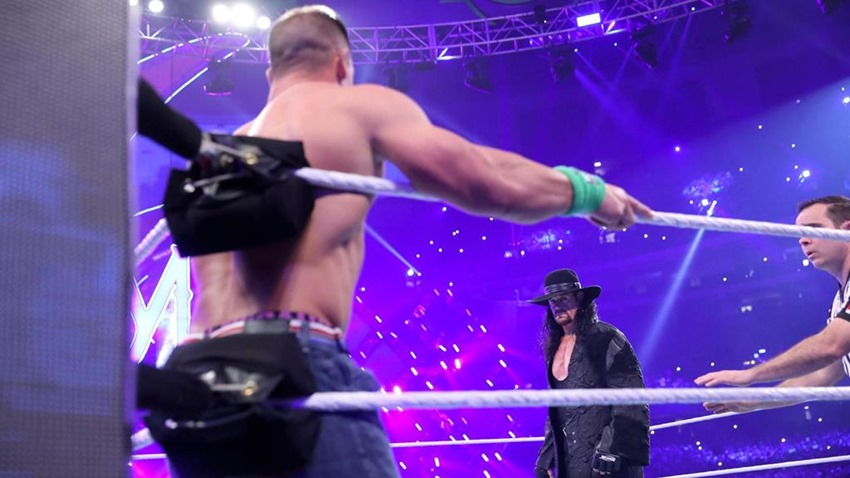 Wrestlemania 33 should have been the swansong that the Undertaker deserved. Two losses in a row to two men who would face each other in a main event a year later, the story of the deadman was done and dusted. His ring gear left in the middle of the squared circle, you couldn’t ask for a better ending to the career of the Phenom.

That was, until the WWE applied a massive payday finisher to Taker and coaxed him back for one more match. Now all credit to John Cena, while his matches are usually more predictable than the mortality rate of a homeopathic hospital, he can still sell a match like few other superstars can. The feud was set up, the players were in place and Cena was ready to face the Undertaker on the grandest stage of them all. Ye gods, what a mess that match was. 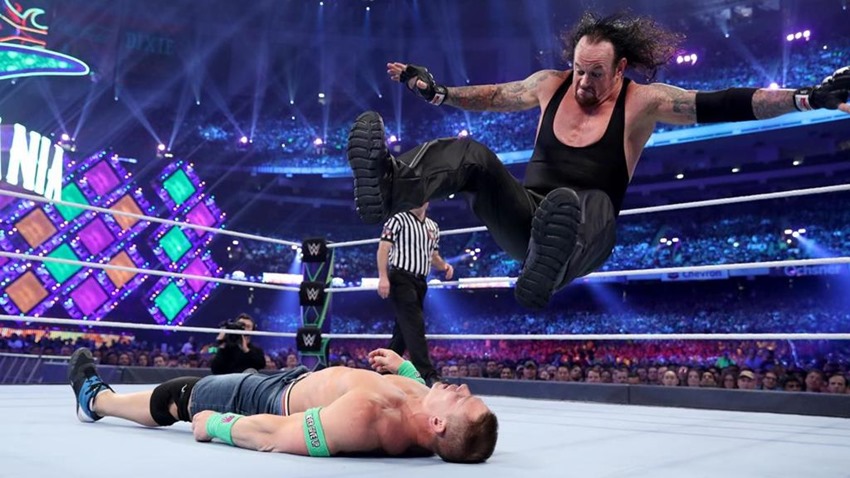 There’s no denying that age has caught up with the Undertaker, as his moves were stiff, his ringwork was shoddy and his own entrance felt longer than the match itself. The fact that Cena had to job to a diminished Deadman was simply sad, a painful exercise that resulted in one of the most decorated WWE performers serving as nothing more than a sacrificial goat on the showcase of the immortals. 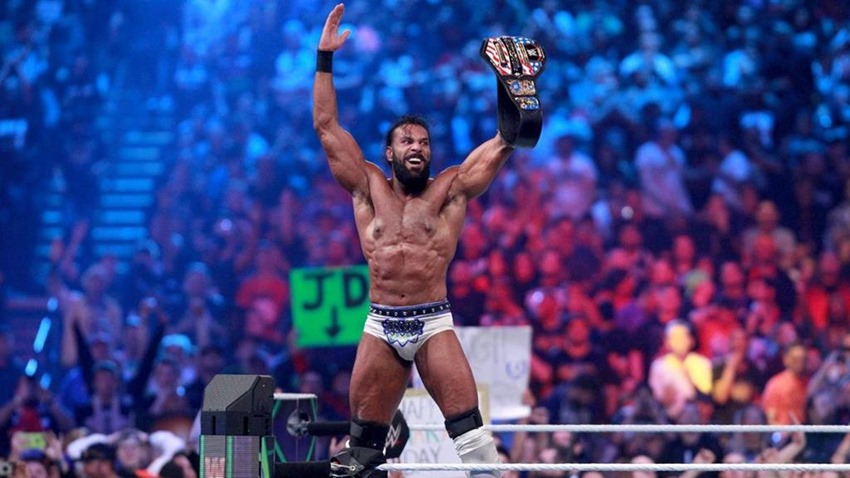 Seriously, Jinder Mahal is still around? When it comes to bad decisions, having Jinder Mahal spend most of 2017 as WWE champion ranks right up there with invading Stalingrad during winter. Mahal’s run as champ was terrible to say the least, generating little to no interest or even any heel heat along the way. The fact that Mahal went over established performers such as Bobby Roode or Rusev? 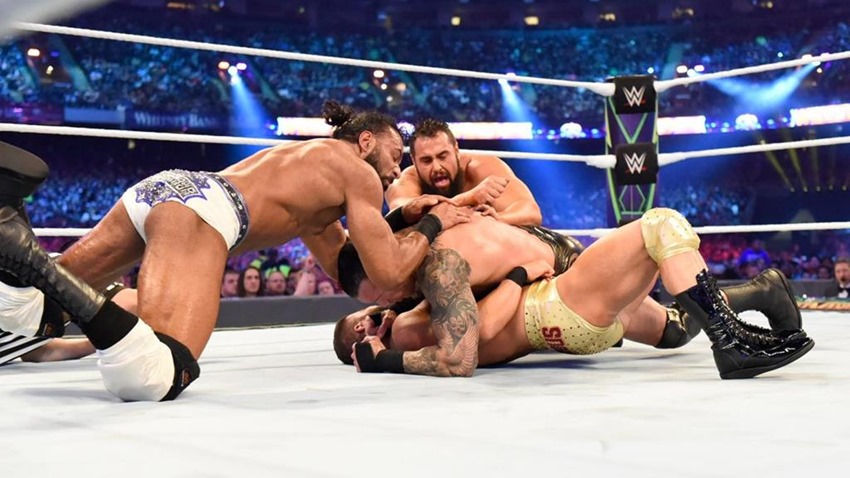 A slap in the face to some of the hardest working athletes on the roster, especially with Rusev Day being a slogan that has erupted int the consciousness of the WWE Universe. If Wrestlemania 34’s US title bout is any indication, we already know what we can expect from a Mahal run: A stiff and boring champion.

So, so much blood in that Brock Lesnar vs Roman Reigns main event 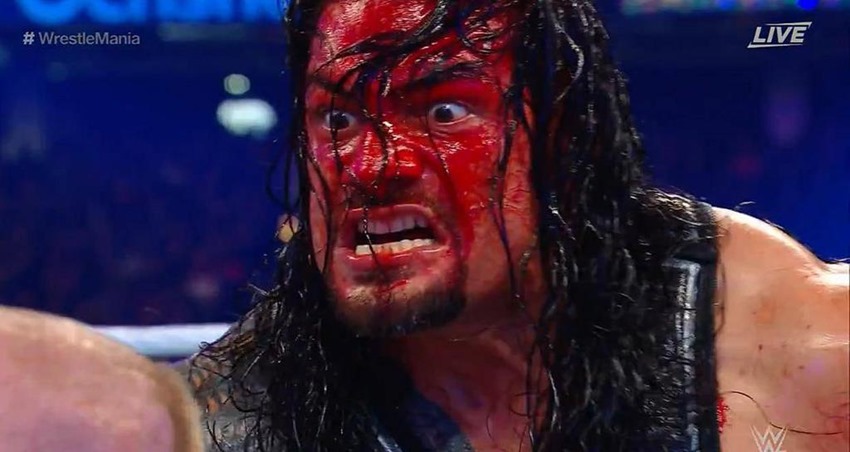 The real shocker of the evening wasn’t the fact that the walking God Mode cheat code from DOOM had managed to successfully conquer Roman Reigns. The real surprise of the evening came from Roman Reigns’ forehead, as we saw a colour seldom seen in the WWE: Red. Struck open by the elbows of Lesnar, Reigns bled buckets of crimson out onto the ring canvas, coating it in a shade of red and still managing to land a pair of Spears on The Beast Incarnate, before he finally succumbed to yet another F-5.

It was a great show of force, and by the sounds of fan murmurings, another desperate attempt by the WWE to get the audience behind Reigns. The only problem? We’ve seen this tactic used in the past before, when Stone Cold Steve Austin sported a crimson mask in his match with Bret Hart at 1997’s Wrestlemania 13. 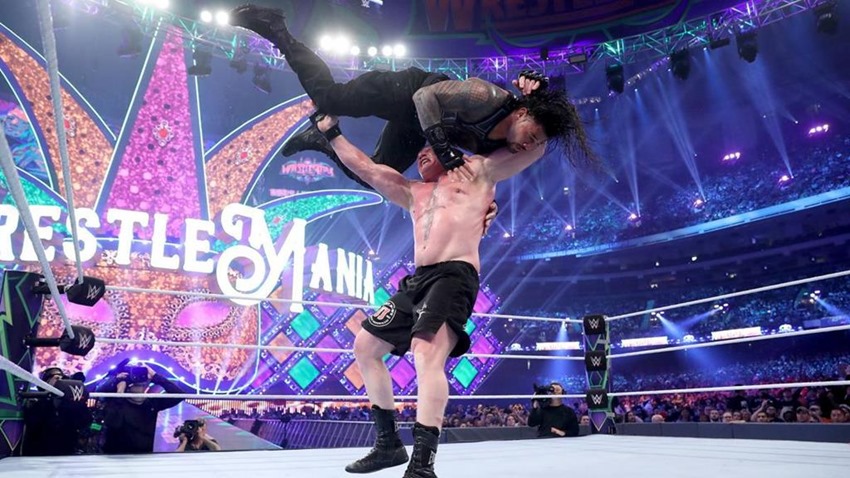 It was a brutal showdown, one that earned Stone Cold Steve Austin a reputation as the toughest SOB to ever walk the WWE and plenty of respect from the fans who came to admire the anti-authority stance of the Texas rattlesnake. Could lightning strike twice, even in the sanitised era of the WWE? By the sound of the loud boos and chants from the audience in attendance, it still sounds like Reigns has a long way to go if he’ll ever want the WWE Universe to cheer him on.