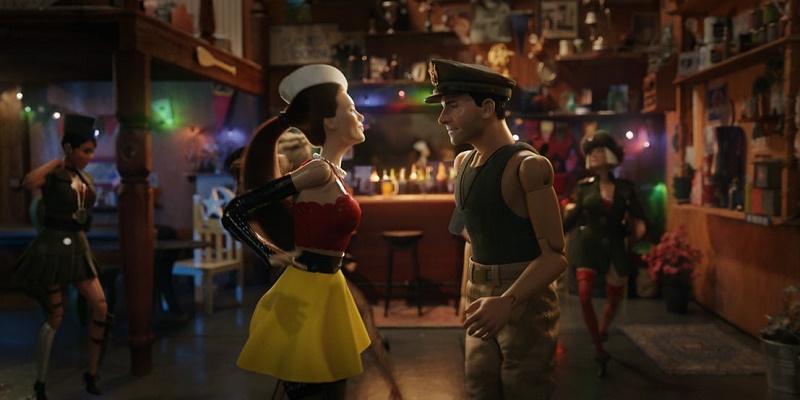 If there is one thing Darryn has proved to the world, it that you don’t only need to stop playing with toys when you’re an adult. Admittedly calling Darryn an adult may be a bit of a stretch, but the truth is that there is still a lot of fun to be had in playing with dolls and toys. Not of that variety, you pervert.

In fact, growing up, toy figurines helped craft a lot of my imagination and kept me occupied for hours on end. So, I guess it shouldn’t really surprise that figurines could make a pretty good therapeutic technique in helping adults deal with traumatic issues too. Which is what this new movie, starring Steve Carell and directed by Robert Zemeckis is all about.

The movie is based on an award-winning documentary titled Marwencol, which tells the true story of Mark Hogancamp who creates a miniature WWII era village as a form of self-therapy after he is left severely brain damaged following a near-fatal assault at a local bar. True to the visual-effects loving Zemeckis though this movie goes beyond just telling the heart-wrenching story, but also incorporates CGI into the mix to visualise how Hogancamp plays out the various stories through his creations and how they tie into his reality.

The movie looks exceptional as both Carrell and Zemeckis seem on excellent form here, and it looks to chug the heartstrings while offering potentially great entertainment at the same time. And it’s not just me, but the studio as well. Welcome To Marwen was initially supposed to release later this month but has now been pushed back to December to put it in line for award season.

Based on the evidence of this trailer, it makes sense to see why they think that though it still represents a brave decision financially considering it will now be up against the likes of Disney’s Mary Poppins, Bumblebee, Alita: Battle Angel and Holmes and Watson. I guess it’s a good thing at least that they have gotten a head start on the promotional trailers because this movie will need every ounce of hype it can get if it wants to make a dent at the box office. Though no doubt awards recognition and positive critical buzz will help as well.

Joining Carell in this CGI-laden drama is also a powerhouse of female acting talent including Leslie Mann, Janelle Monáe and Eiza González. Welcome to Marwen is definitely a movie to be excited about later this year and a potential good form of self-therapy when needing to deal with all that horrible Christmas cheer come December. Bah-humbug!