Home Entertainment The ten most brutal moments from Game of Thrones 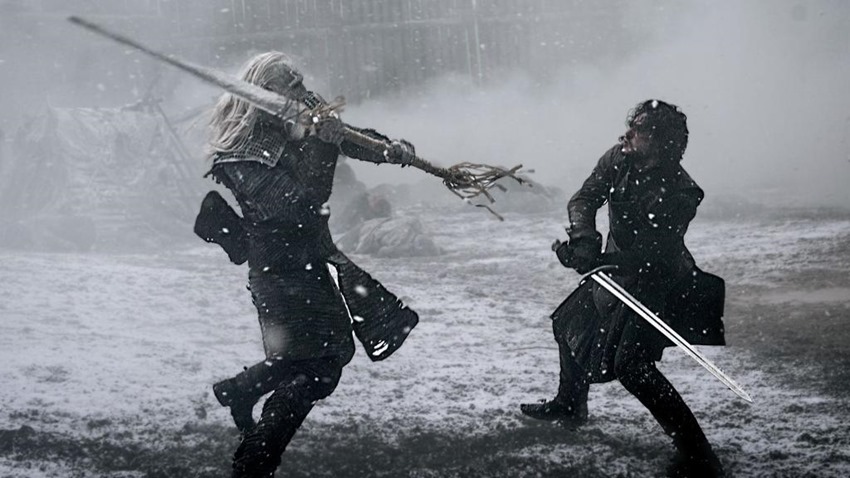 Who would have thought that the battle for the Iron Throne would have ever been so brutal? Game of Thrones may be famous for its lush setting, stellar acting and an incredible eye for detail, but it’s also a series that has earned a certain infamy for taking all of those elements and wrapping them up in a layer of brutality that is simply shocking.

There’s a very real consequence to the actions taken within Game of Thrones, a series that is knee-deep in blood and always seeks to remind its viewers that nobody is safe from the sharp end of a sword. Ahead of the upcoming eigth season debut of Game of Thrones on M-Net and Showmax from April 15, here’s a look back at ten moments from the series that carved a bloody swathe across all of Westeros.

A golden crown that men will tremble to behold 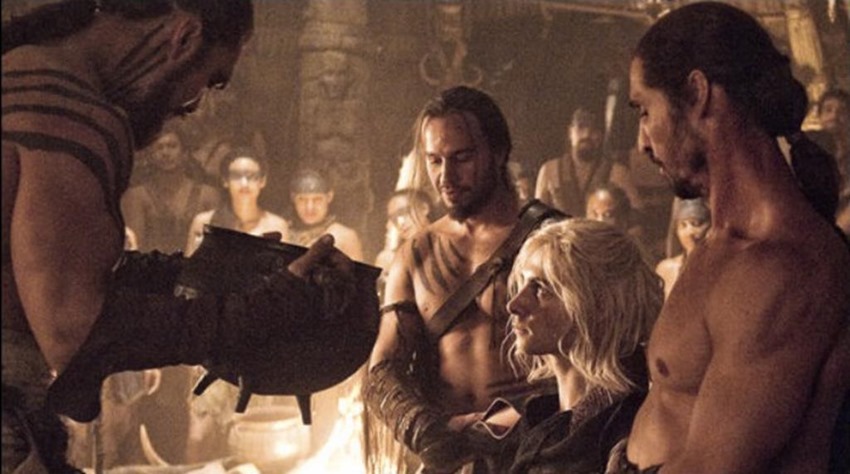 Poor Viserys. He was never meant for the throne, and despite all of his ambition, his dealings and actually selling his sister off to a warrior-king just so that he could have some advantage in taking back the Iron Throne that his father once sat on, destiny had other plans for him. After all, Khal Drago didn’t earn his reputation by handing out hugs and tickles to his enemies, but seeing Viserys threaten his bride Daenerys and point a blade at his unborn child?

Well, that’s just asking for an ironic punishment. Promising Viserys a “golden crown that men will tremble to behold”, Drogo fulfils his end of the deal by encasing the head of the would-be dragon in molten gold, brutally executing Viserys and leaving his head to slam into the floor with a thickening and heavy thud.

Today’s not the day I die! 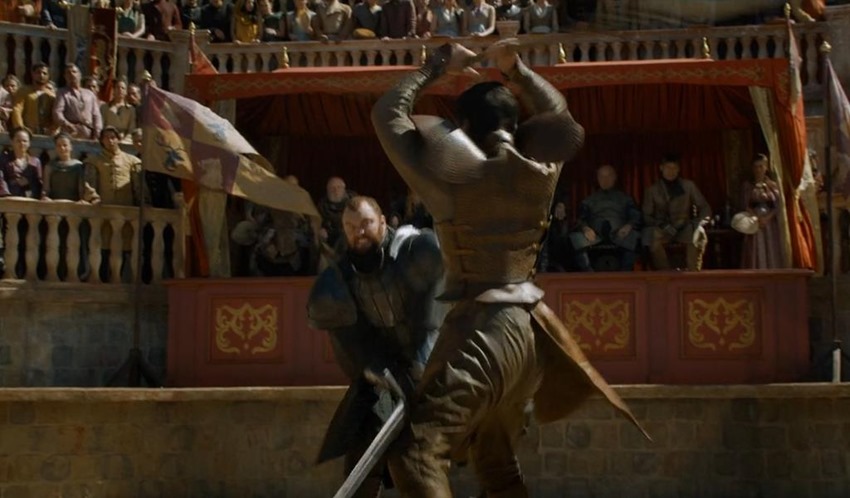 Anyway you sliced it, Oberyn Martell had main character written all over him. Always smiling, able to back up his boasts with devastating skill and an artist with a spear, Martell’s quest for vengeance eventually brought him face to face with a man that he had plenty of bad blood for. The Mountain was a legend, a titanic warrior and a fiend who had raped Oberyn’s sister and murdered her children in one foul swoop.

Dancing around the behemoth, Oberyn looked to have this round in the bag. Using speed and agility to keep the Mountain at bay, it wasn’t long before the hulking warrior found himself wounded, without a weapon and flat on his back. Oberyn’s revenge would be complete, the honour of his family would be restored and he’d have another legend added to his name.

Well, not exactly. In one single moment, the Mountain took control of the fight, burying his gargantuan thumbs into Oberyn’s skull and literally popping it like a cantaloupe with his inhuman strength. Grisly to the extreme, this one moment cemented a new status quo within the world of Game of Thrones, while leaving Oberyn’s legion of fans traumatised and ill at the sight of the beloved heroes remains being left to bleed out over the arena’s scenic view.

Theon Greyjoy gets a fate wurst than death 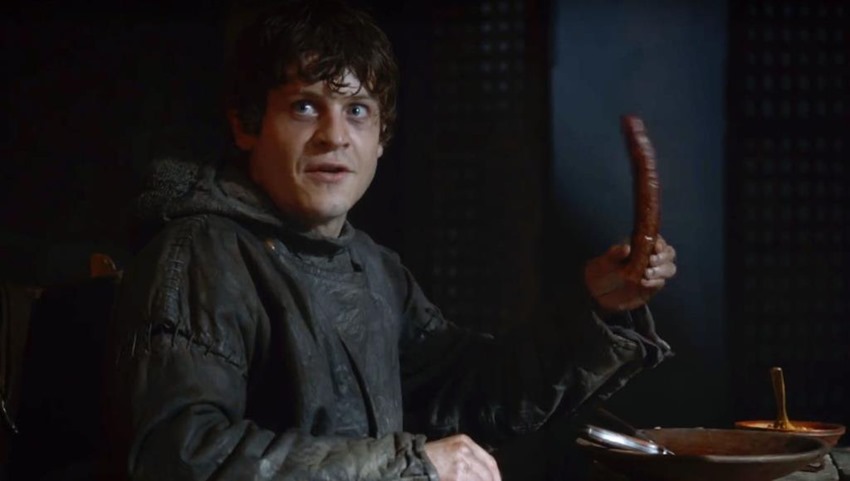 Look, we could fill this entire list with the actions of Ramsay Bolton, the madman who lived up to his bastard moniker in more ways than one. A villain in very sense of the word, Ramsay was a psychopath with the support of royalty behind and a sadistic hunger to match. Taking great joy in the suffering of those around him, just one of Ramsay’s most heinous acts came about from his prolonged torture of Theon Greyjoy.

The man who betrayed the Starks so that the Lannisters could seize the Iron Throne soon found himself in Ramsay’s clutches, regularly tortured, humiliated and broken so that the Bastard of Bolton could have a new toy. Ramsay’s final act in ensuring Greyjoy’s transformation into his puppet that he would call Reek?

A very literal emasculation of Theon’s infamously large appendage, highlighted by Ramsay’s cruel laughter and a bite of a generous sausage.

Love me tinder, love me true 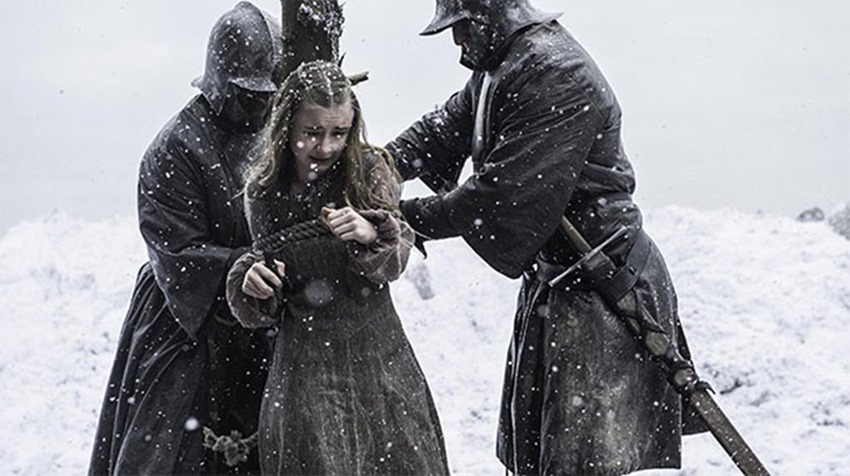 Robert Baratheon may have been dead, but if ever there was a successor to his throne, it was brother Stannis who seemed perfect to take control of Westeros. Only problem? Melisandre the red witch, who promised Stannis a power beyond that of mortal man and convinced the would-be monarch that he was more than a man, a god who was waiting for his ascension to a higher plane of existence.

To break free from his mortal shell, Stannis was led to believe that he’d need to sacrifice his own daughter Shireen to the lord of light. Tied to a stake, a fire set ablaze around her and her screams of agony falling on deaf ears, one of the purest and most innocent characters in Game of Thrones found herself murdered for a fool’s errand as the house of Baratheon was forever tainted with the blood of its own.

Choking on your aspirations 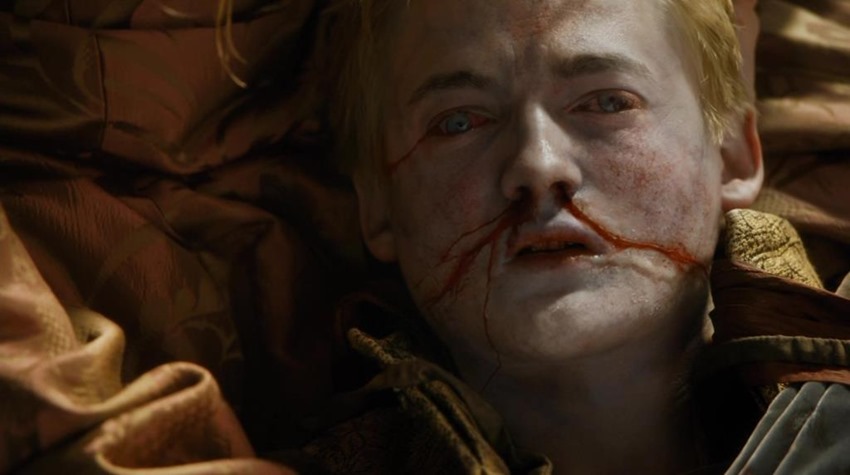 It’s safe to say that Joffrey may have been the most hated character in all of Game of Thrones, long before Ramsay Bolton made an appearance. A petulant child born from incest, prone to manic mood swings and vile in every way possible, Joffrey only got worse when he ascended to the Iron Throne and was given ultimate power.

With no limits placed on his authority, King Joffrey’s reign of terror could only end in misery and applause from every one who wanted to see the turd taken down a few pegs. Which is exactly what happened! At his own wedding to Margaery Tyrell, Joffrey succumbs to a particularly brutal strain of poison, painfully choking, convulsing and vomiting in the arms of the one person who truly did love him, his mother Cersei Lannister.

Hated and despised in equal measure, Joffrey may have been a monster but there’s a certain viciousness to seeing a child die, let alone who had tempted karma far too much and found himself paying the ultimate price. 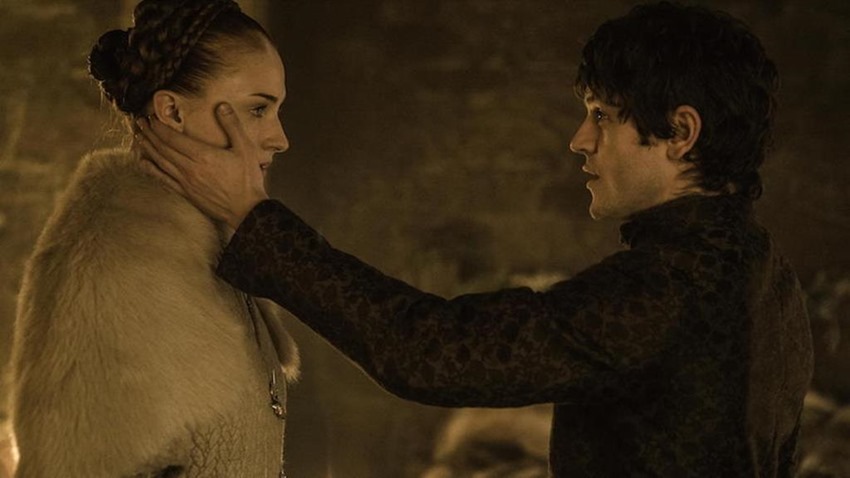 Remember what I said about Ramsay Bolton easily dominating this list? If you thought his sausage-severing antics were bad enough, you hadn’t seen anything yet. With Sansa Stark forced to marry Ramsay, she soon found herself the target of Bolton’s desire to totally dominate anyone who crossed his path. His plans to torture and maim her remaining friends, allies and friends was bad enough, but Ramsay decided to cement his legacy as the most despicable character in Game of Thrones by raping his unwilling bride, in front of the emasculated Reek.

Horrifying to watch and rightfully controversial outside of the TV series and within the Game of Thrones fandom, Ramsay’s attack was just another reason to hate Bolton’s black sheep, and another strike on his record that would soon see him answer for his crimes… 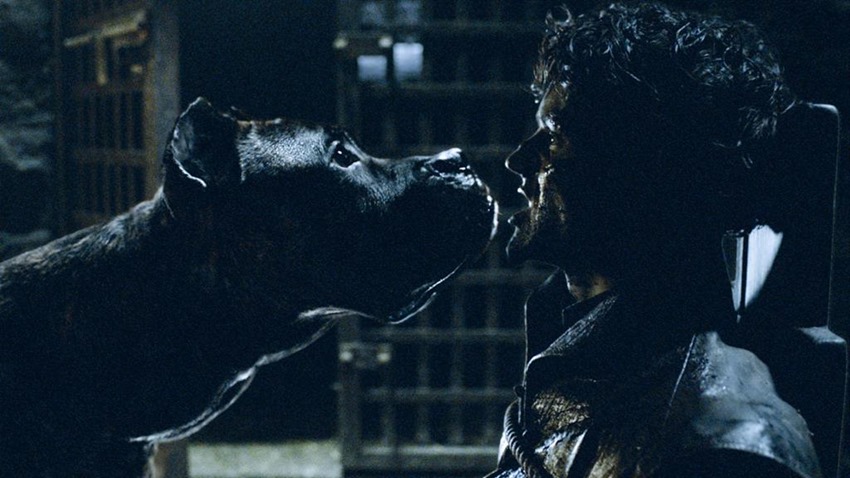 Which he most definitely did! With the Battle of Bastards won by Jon Snow, a bloodied and thoroughly beaten Ramsay finds himself strapped to a chair and facing his wife. Still finding the energy to taunt her, Ramsay is soon reunited with his beloved hounds, only to be told that his favourite beasts have not been fed for a week and are rather hungry for anything.

Believing that his hounds would never harm him, Ramsay quickly learns the hard way that loyalty is no match for an empty stomach, as his dogs tear into him and rip him apart piece by piece, ending the Bastard of Bolton once and for all.

Anyone care for some pie? 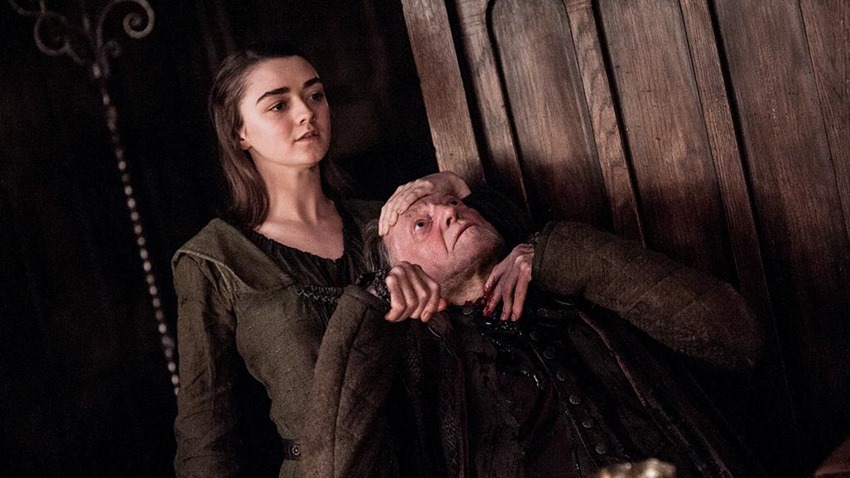 By the time that Game of Thrones had managed to get a few seasons under its belt, we’d seen plenty of violence already. Botched beheadings, bellies run through with cold steel and literal backstabbing seemed to be a way of life in Westeros. So what makes Walder Frey’s death so memorable? After all, a slit throat is the Game of Thrones equivalent of a slap on the wrist, but Arya Stark’s revenge was extra tasty in her ruthlessness.

Infiltrating the old man’s castle and catching him completely off guard, it’s the final meal that Frey ate before he tasted Arya’s dagger that will really have you dry-heaving: None other than his own sons, who’d been killed, chopped up and baked into a pie that Frey was heartily digging into before he was finally killed off for good. 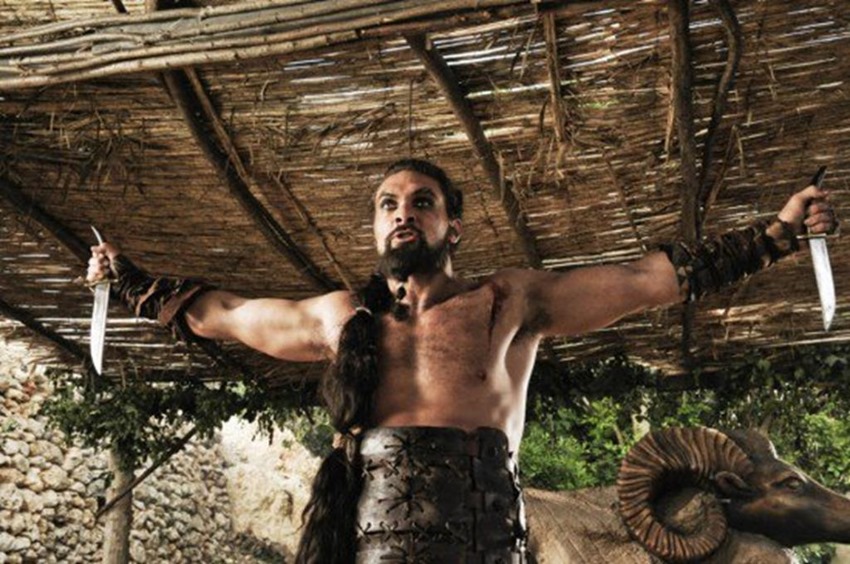 Considering that he died all the way back in season one, it’s hard to forget just how much of a badass Khal Drogo really was. Leader of a tribe of battle-hardened warriors, Drogo’s rule was cemented in fire and combat. Challenged by Mogo, Drogo quickly reminds his clansman just how bad of a decision he had made when he verbally describes in gory detail how he’ll leave his body to rot in the sands of time, punctuating his statement by ripping Mogo’s own throat out with his bare hands.

The fact that Drogo did this without any weapons whatsoever? Even more impressive for the warrior king who deserved a long an glorious life beside his beloved queen. 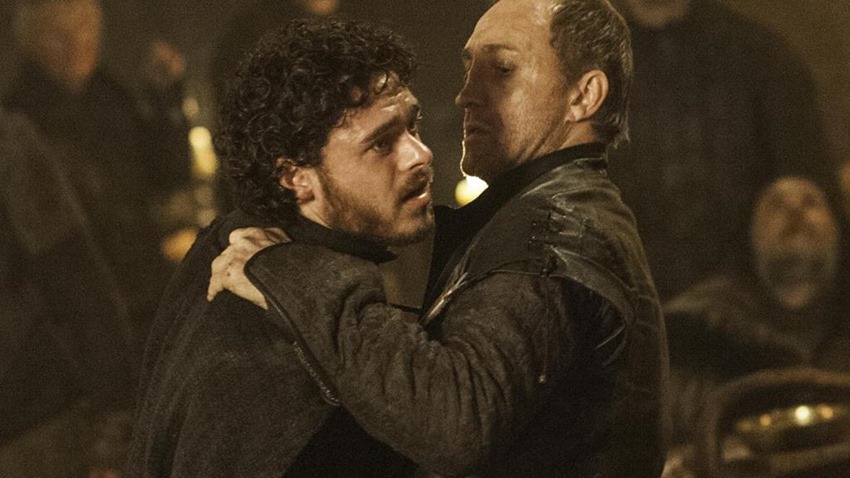 I mean, how could you not see this coming, unless you were part of the Stark family entourage at Walder Frey’s banquet? For months, anyone who had read the Game of Thrones novels and knew of the carnage to come was sitting next to you on the couch and giggling away at the scene that was to unfold. George RR Martin’s books already detailed a gruesome end for King Robb, his wife Queen Talisa and his mother Lady Catelyn, but seeing it unfold?

Seeing a pregnant woman have her belly stabbed repeatedly, Robb Stark peppered with arrows and to see the land run red with the blood of thousands of Northern soldiers who were betrayed by the Freys? Truly a chilling scene, and one that is likely to remain a benchmark for cruelty, viciousness and pure bloodlust for all time.

Remember, you won’t need to wait long to see these new episodes either, as Showmax will have them up and ready to go every week. Season 8 will be on Showmax at the same time as the Primetime M-Net broadcast, from 10PM on 15 April.  If that’s not early enough for you, you can also catch the first episode right away from 3AM on M-Net come April 15.