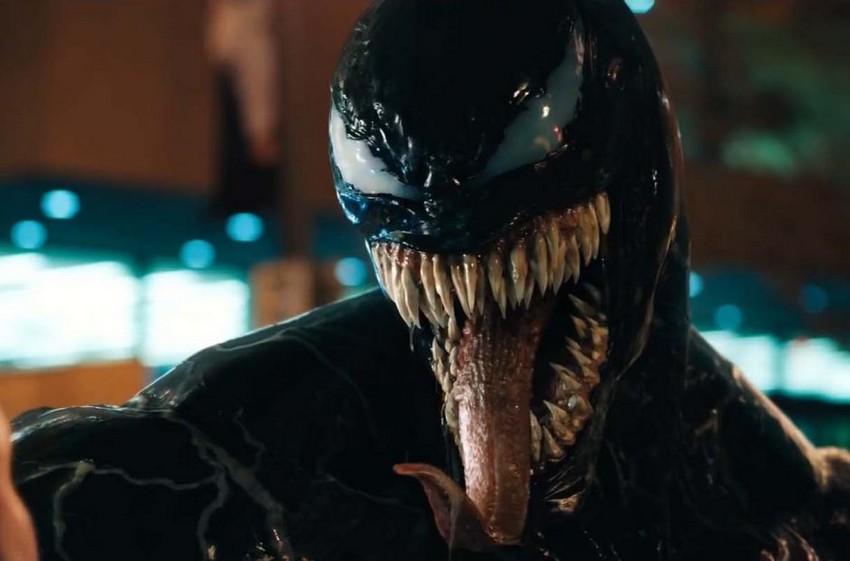 In the run-up to the release of Venom, director Ruben Fleischer’s Spider-Man-less live-action feature film adaptation of the webslinger’s iconic comic book anti-hero, there was quite the brouhaha surrounding the news that the Lethal Protector’s first solo film would be a PG-13 affair. Turns out that crimson-free action – and there are a few laughable moments of that as decapitations apparently produce about the same quantity of blood as swatting a moth – is the least of Venom’s problems.

For the uninitiated, Venom is the name of a gooey alien symbiote creature brought to Earth. In the comics, it was Spider-Man who was the bearer of bad ooze, here it’s Riz Ahmed’s shady science mogul Carlton Drake (whose depraving villainy is made instantly clear by his repeated choice of wearing zipped-up turtlenecks underneath a suit jacket). That’s quite the step-down, but one that’s necessary thanks to Sony’s puzzling insistence on plowing ahead with this idea of a shared Spider-Man cinematic universe without Spider-Man. 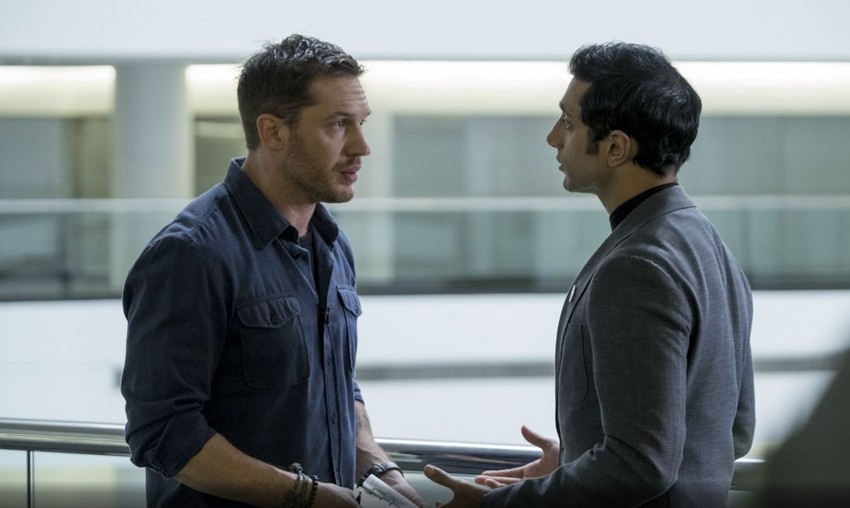 With no Peter Parker, it’s just Eddie Brock (initially played by Tom Hardy, then later by a sweaty, herky-jerky, whirlwind of manic tics that maybe kinda looks and sounds like Tom Hardy) that is the good reporter here. After sniffing out a lead via his lawyer fiancé Anne (Michelle Williams), his investigations lead him into a secret lab where Drake is experimenting with forcibly bonding the symbiote to human hosts. Unfortunately for these poor saps, the bond is a failed fatal one. At least until the symbiote finds an unexpected compatibility with reluctant host in Brock, initially just presenting itself as a growling voice in his head, before showing off a range of powers as it transforms Brock into a hulking, toothy, face-munching monster. 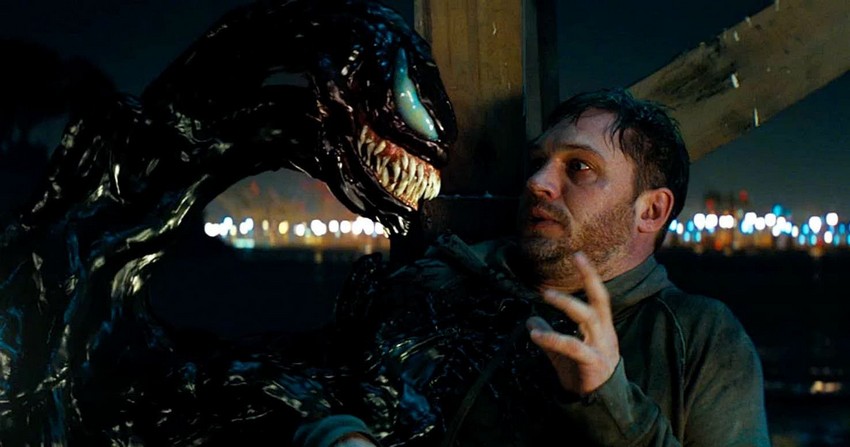 I feel like I need to point out that the movie takes nearly an hour to get here. Although a surprising amount of early character work is appreciated, Venom’s opening will feel like a slog punctuated by the odd bit of action courtesy of Drake’s machinations as he tries to corral his ET. However, when the film does get going though, it then feels like a madcap rush to its frenetic finale – and two end-credit scenes! – just leaping over terrible characterization (wait until you hear the reason why the symbiote wants to stay on Earth now that “obsession with Spider-Man” can’t be used) with its see-saw pacing. The film also boasts some gaping plot holes and basic editing/screenwriting snafus. Early on, after the symbiote infects a lady, the timeline jumps ahead 6 months in Brock’s life, however when we get back to the symbiote it looks like barely half a day has passed for it and the screenplay by Scott Rosenberg, Jeff Pinkner, and Kelly Marcel just doesn’t seem to notice. 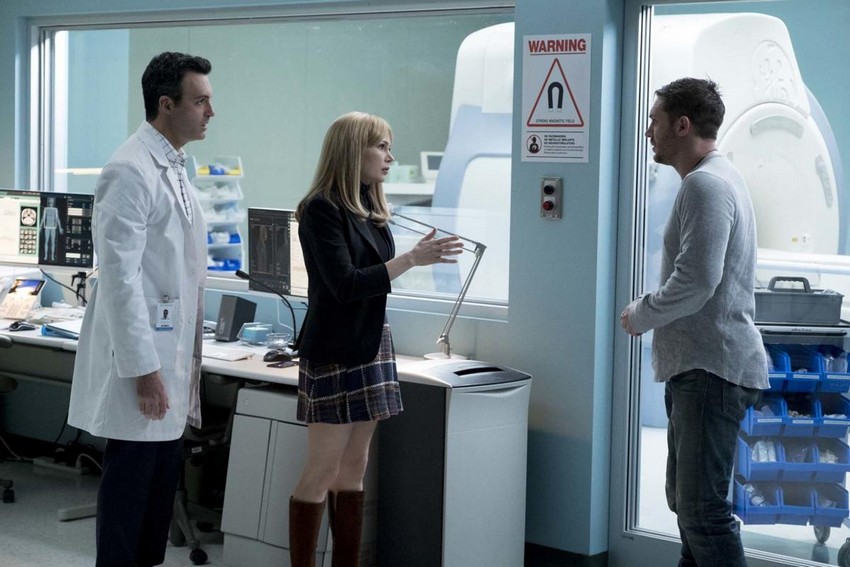 Hardy’s performances are also all over the place. Even putting aside his growing collection of giggle-inducing weird character accents, the British thespian starts off playing things rather straight until Venom starts growling in his skull to eat people. From here onwards, it’s like the rest of the cast continues to act in the movie they started out in (in Ahmed’s case, this is a rather bland, by-the-numbers affair), whereas Hardy now thinks he’s in a Looney Toons cartoon to the point where I wouldn’t have been surprised to see him painting realistic train tunnels on mountain cliff faces. As Venom continuously berates the increasingly unhinged Brock, his mania gets played up for laughs… but only about half the snickers elicited from the audience are actually intentional as things get a little too crazy in places. At least it’s memorable though.

All of that being said, the symbiote action is great as Brock often finds himself a passenger in his own body as Venom whips, flips and smashes the goons that Drake sends after him. And he looks damn good doing it. Biting the head clean off the memory of Topher Grace’s terrible incarnation of Venom in 2007’s Spider-Man 3, this new version of the character should definitely give fans a kick for what Fleischer has done. Here Venom looks like it’s stepped straight from the comic book page, slimy tongue and all, oozing power and unbridled violence as is roars through its obstacles and enemies. 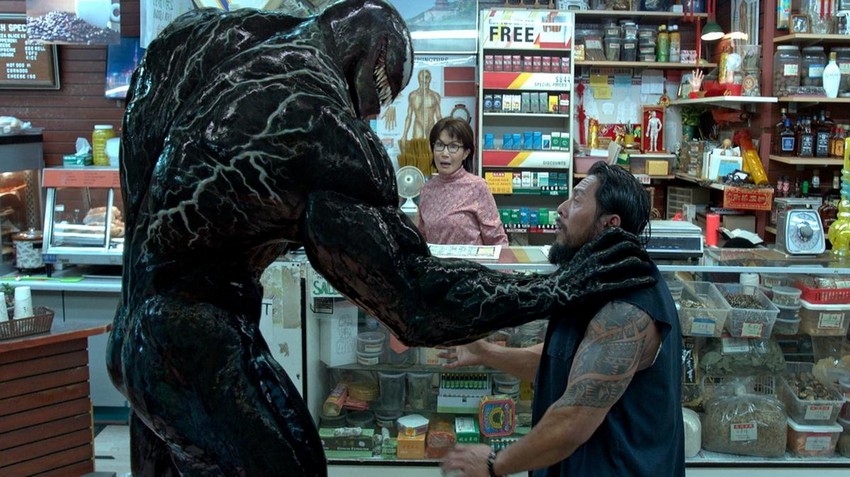 Based on early reactions, I was expecting to walk out of the cinema going “Symbi-oh shit that sucked on every level”. And after Grace’s hammy rendition of Venom in Spider-Man 3 a decade ago, there was really nowhere left to go but up. Luckily, Fleischer and co definitely do that thanks to their source material fidelity to Venom itself and the fun that can be had with him and the comic book action beats. The film is most definitely still also messy and patchy, plagued by rudimentary filmmaking fumbles and a Jekyll & Hyde performance from its star that seems to just be missing a wisecracking cartoon rabbit sidekick.

One that Venom would probably have eaten (without any gore and viscera, of course).