Home Entertainment Want to watch Anime? Here are ten great series to get you started 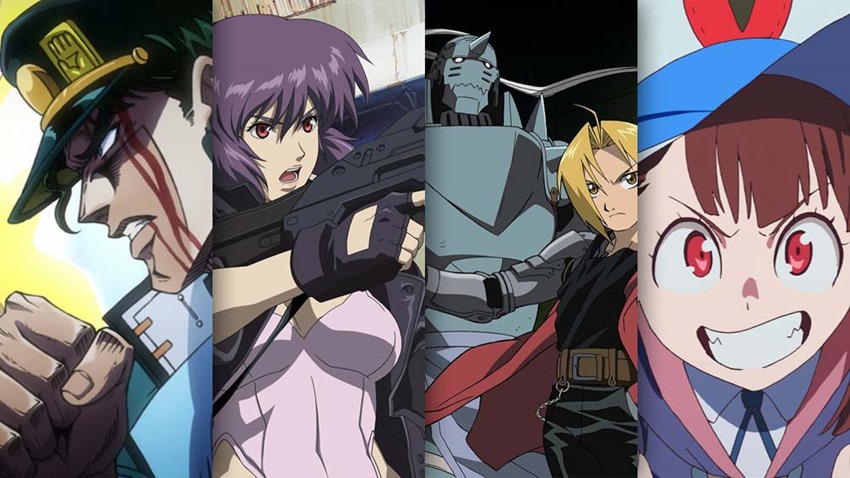 Japanese animation! Japanimation! Anime! There’s a lot that the land of the rising sun is famous for, from incredibly specific pornography through to stunning technological breakthroughs in consumer electronic, but its the animation industry of that island nation that has earned a ton of love from the west, north and south.

With anime, you never know what you’re going to get. Maybe you find yourself watching a thrilling murder mystery, maybe you’re sitting back and enjoying two decades with of character building to see a hero emerge triumphant. Whatever your taste, there’s an anime waiting for you. Even if you’ve never watched the stuff before.

We’ve got a list of anime series that are prefect for beginners, albeit it with a few ground rules. We’ve selected series that are mostly complete and aren’t burdened by approximately 3 trillion episodes worth of filler that deviates substantially from the manga source material. We’re looking at you, One Piece.

Basically, we’ve got a list of anime that can be easily binged, hooking you in and setting the stage for more content in the future. let’s kick this list off with something recent in the form of: 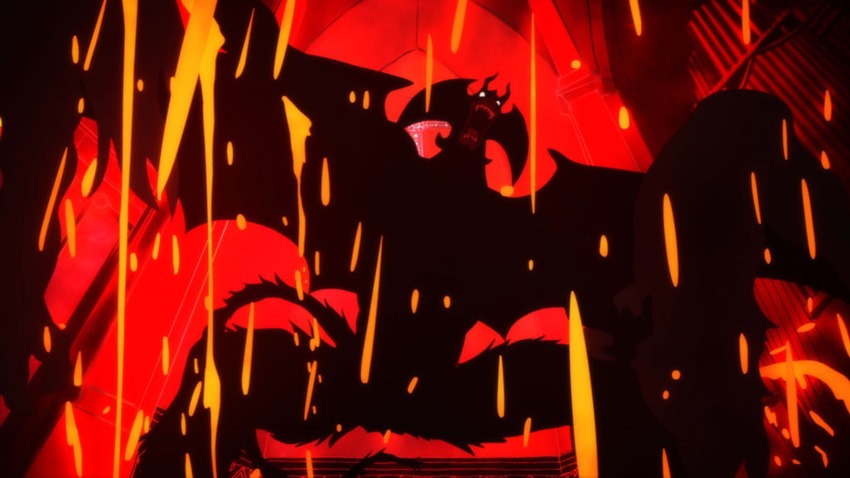 You’re either going to love or hate this series, but if you can stick through it, it’s a masterpiece. The Netflix exclusive series is devilish in its details, creating a saga of love, war and loss across a series that is always in flux. Visually, Devilman Crybaby is a collection of episodes with the most fluidic animation around, always flowing and pouring itself into moments of scandalously sexy conflict that is very much not for children.

It’s an examination of what it truly means to be human, to love and lose the game of life where the entirety of existence is at stake. Brief and brisk, Devilman Crybaby will leave your heart broken by the time the end credits roll. 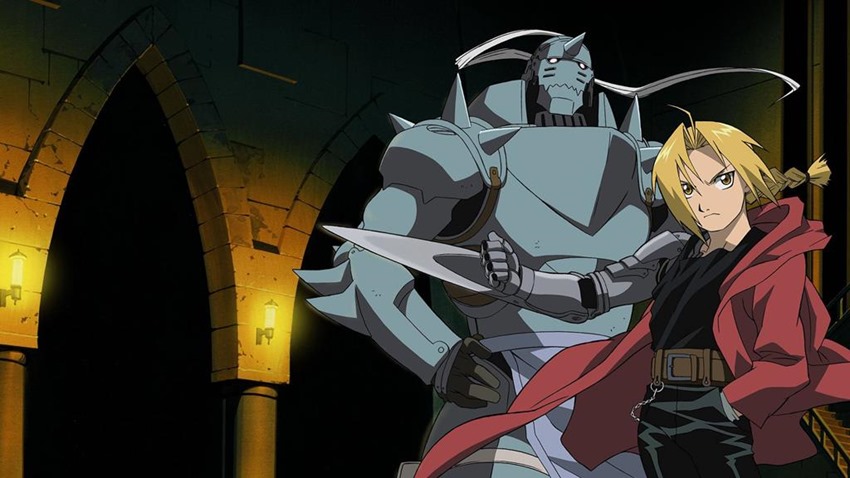 How far would you go for family? Would you donate blood? Would you sacrifice an arm, a leg and your younger brother’s very being in an arcane ritual to bring back your beloved mother? Because that’s the scenario that unfolds in FullMetal Alchemist, as the Elric brothers find themselves on a quest to heal not only their broken (and missing!) bodies, but also soon find themselves caught up in a conspiracy that has hundreds of thousands of lives at stake.

In a world where alchemy has created a new magical arms race, FullMetal Alchemist: Brotherhood is a touching journey. Long before Star Wars: The Last Jedi layered in a message of letting go of the past, this anime series painted a picture of the danger of attachment and worship of the old ways, while combining that message with the best damn cast around and protagonists that you couldn’t help but love.

It’s the true strength of brotherhood, that proves that the bonds of family are far more powerful than even the most dangerous of untamed magic in this glorious steampunk world. 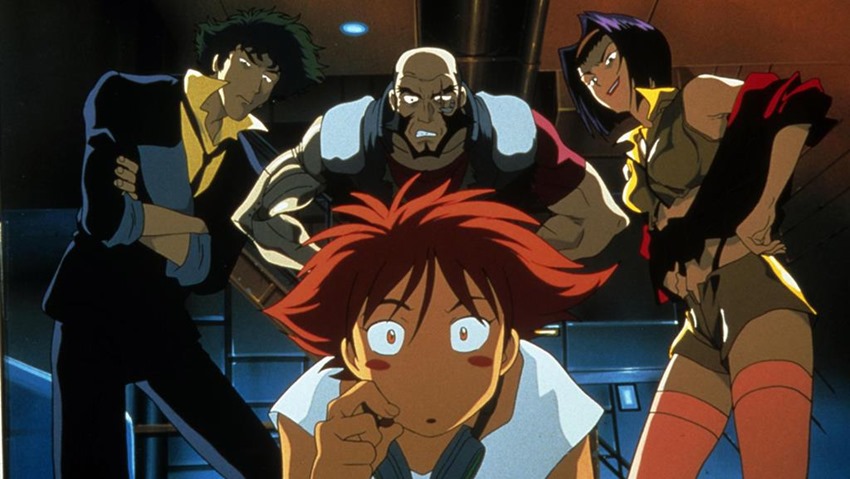 You ever fancied a solid sci-fi story that was less about magical space wizards flinging laser-swords around and focused more on a gang of likable rogues carving a career out in the deadly regions of our local solar system? Then buddy, Cowboy Bebop is what you’ve been looking for. Imagine Joss Whedon’s Firefly except its not rubbish, blended together with gritty action sequences and an overarching tale of revenge spread across the wildy different terraformed worlds in our solar system, and you’ve got a winner.

Throw in some extra toppings in the audio form of a funky jazz soundtrack, and Cowboy Bebop is a masterpiece that marches to its own tempo. It’s fresh, it’s grand and there’s a reason why Radical Edward is the patron saint of computer programmers across the world. Full of mystery, fun and adventure, Cowboy Bebop is a short and sweet series that’ll have you constantly guessing the motives of the crew of the Bebop as they frequently find themselves in over their heads. 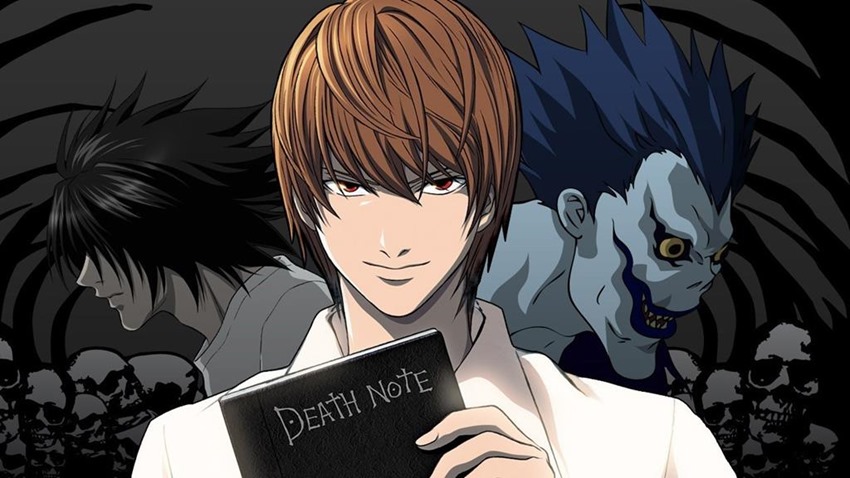 Imagine if Bruce Almighty wasn’t a delightful Jim Carrey comedy, but was instead a dark thriller that showcased the danger of a mortal having the power of god. Death Note starts out on a simple hook: Prodigious high school student Light Yagami stumbles upon the Fabled Death Note, the book wielded by the gods of death who use the journal to naturally cull the human population and send their souls to the afterlife.

Armed with the power to take life by merely writing a name within the note book, Light’s initial attempts to bring justice to the world quickly take him to the brink of insanity as he becomes mad with power and he finds himself matching his formidable wits with a detective that is on his case. Death note excels at this mental cat and mouse game, tossing plot twist after plot twist at viewers as the net tightens on Light and he has to find a way to escape the numerous traps set for him.

Death Note is a rarity, a series where the bad guy wins and the good guys often find themselves on the retreat against a force they simply cannot comprehend. Forget Inception, The Fountain or even Altered States, as Death Note is a masterpiece of cerebral action. 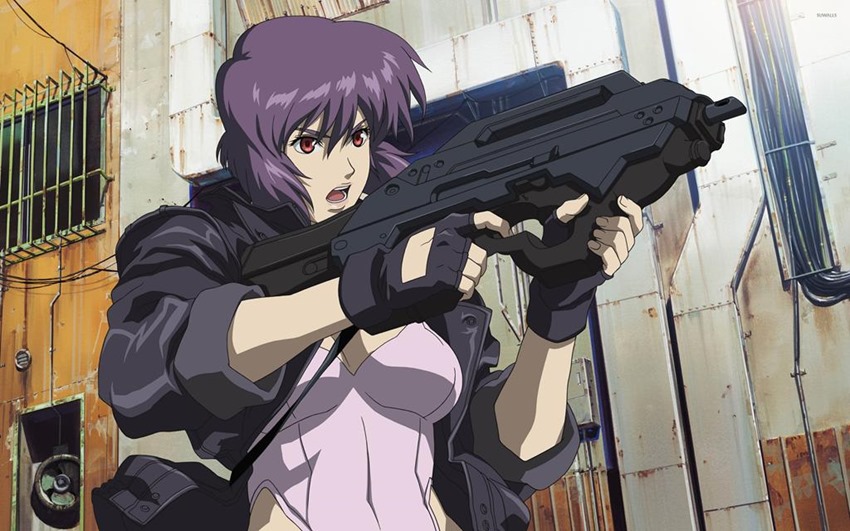 Speaking of sci-fi, the future of how we define ourselves as human is going to be bloody weird. In a potential scenario that could see humanity gladly lop off its limbs for performance-enhancing bionic replacements, the flesh could soon give way to the rise of the machine. Ghost In The Shell, the landmark anime film which questioned just how much humanity we could have when encased in cutting-edge cybernetics, lived on in a sequel series which not only sought to examine that question but also expand its own world.

With a conspiracy around every corner and dangerous opponents in the highest echelons of government, the return of Major Motoko Kusanagi resulted in an action-packed look at the future where not even humanity’s dreams were safe from intrusion. 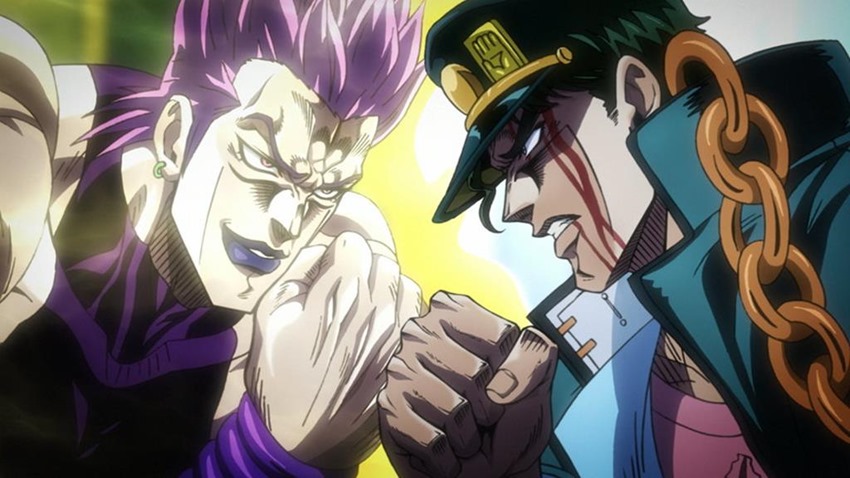 There’s nothing wrong with machismo when a series is self-aware of it, and brother, let me tell you something: Jojo’s Bizarre Adventure is more than aware of its incredibly over-the-top manliness. Characters are built like Pacific Rim jaegers on steroids, the sheer swagger on display is tight enough to give Mick Jagger a heart attack and the action beats are violent enough to cause a second mass extinction event.

There’s a lot to love about the world of Jojo, of how the series started out as a Japanese take on Dracula and evolved into a supernatural saga that featured an equal amount of hard rock references and swanky poses by the lead characters. Gorgeously animated and voice-acted, Jojo’s Bizarre Adventure will leave you shouting “ORARARARARARARA” by the end of its runtime. 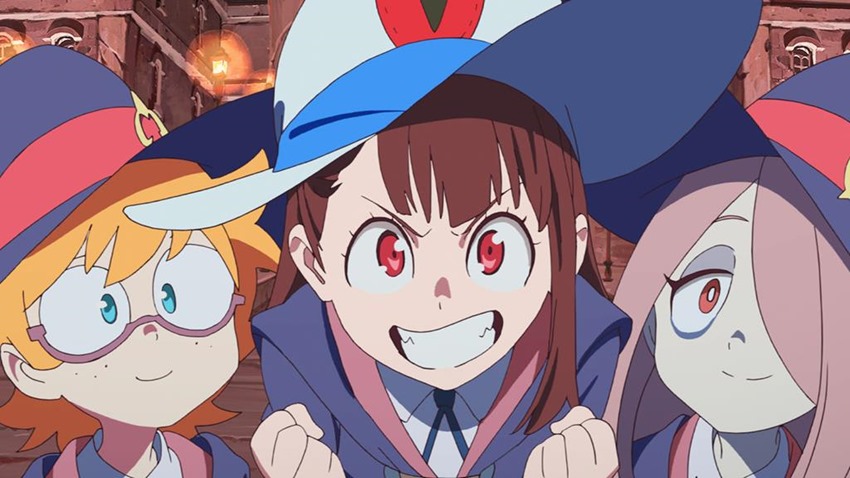 Maybe you’re looking for an anime series that is more innocent, suitable for any age and utterly magical in its warmth. If so, then look no further than Little Witch Academia. A story of effort, believing in yourself and finding the magic within you, Little Witch Academia is a breathtakingly beautiful adventure that is consistently fun to watch.

It’s warm, its message is never shoved down your throat and the payoff is well worth the few hours of emotional investment that you’ll gladly pay to see, thanks to a well-rounded cast of witches who make the impossible possible. 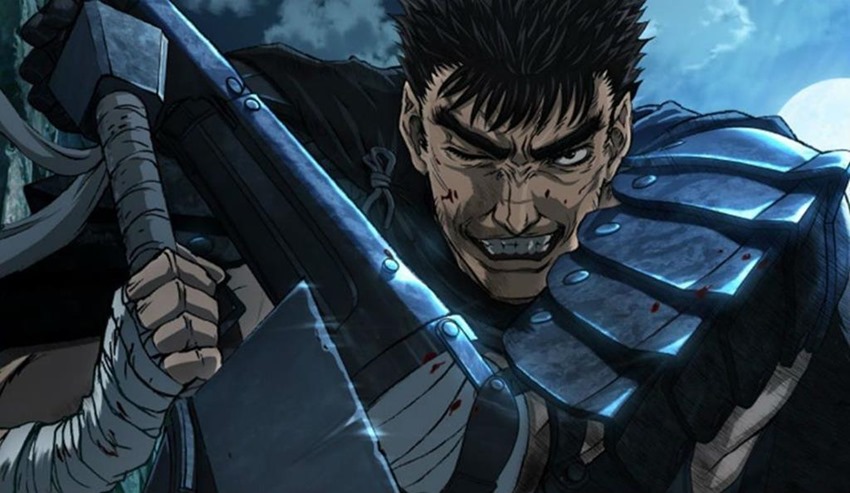 Anime and the fantasy genre go together like Timtams and diabetes. It’s a match made in heaven, and one that has been thoroughly explored in dozens upon dozens of productions. Not a single one of them can hold a candle to Berserk however, a vicious and nihilistic take on the genre that is still unmatched in the sheer ferocity that it unleashed so many years ago.

Berserk is unrelenting in its tone, an exploration of fighting back against fate in a world that has no mercy for the weak. It’s brutal, harsh and unflinchingly cruel in its violence as its lead protagonist Guts finds himself losing more and more of himself (physically and spiritually) to the hatred that fuels him on his grand quest for revenge against the man who cost him everything in life.

Action. Action! ACTION! Anime has long been capable of delivering the kind of action that would murder an entire studio worth of stuntmen if they were replicated in Hollywood, and Tengen Toppa Gurren Lagann was the zenith of that kinetic peak. While the setup was simple (humanity fights back after centuries of conflict that saw our species pushed to the brink of extinction and underground), the action certainly wasn’t.

Tengen Toppa Gurren Lagann is at its heart, a show about escalation. Simple fistfights evolve into all-out skirmishes with weapons, small droids and massive skyscraper-sized robots, and that’s just in the first half of the show. Before long, the action shifts towards moon-sized mecha and goes even further beyond as all of creation is a battlefield in a vast universe.

An utterly sublime slice of animation, Tengen Toppa Gurren Lagann has heart, charm and skills to pay the bills with a drill that was designed to pierce the heavens themselves. 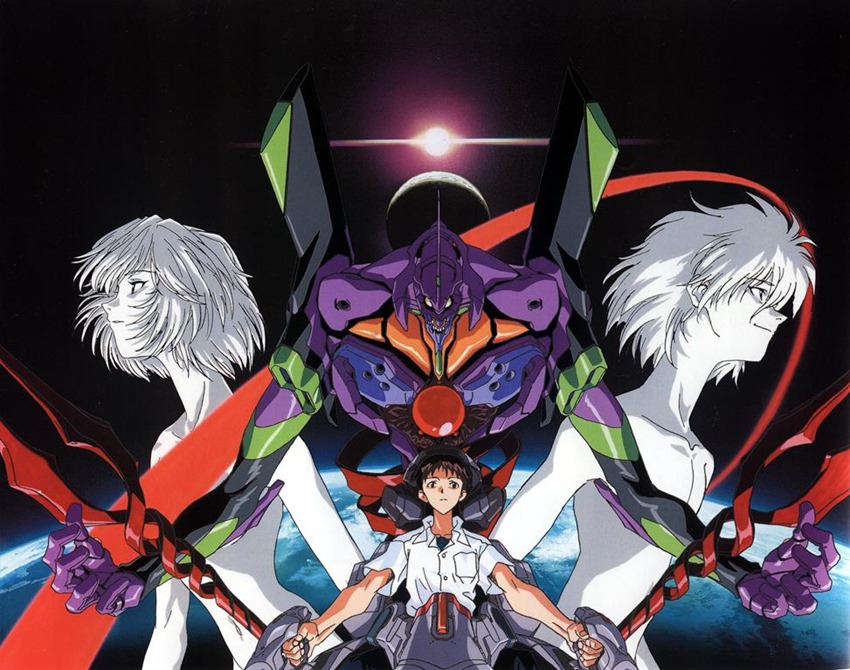 This is…easily the most polarising entry on my list. Neon Genesis Evangelion is a series that I love and loathe. At first glance, it’s the prototype for Pacific Rim: Big mecha, punching even bigger threats to humanity. Beneath that surface however, there beats a black heart of depression, madness and flatout mindf***ery.

You never know who or what you can trust in Neon Genesis Evangelion, a depressing journey into the end of the world starring a cast of teenagers and adults who exist to serve several character archetypes and then bust them apart with gusto. Hell, by the end of the series you’ll be convinced that nobody within Neon Genesis Evangelion is even redeemable, as they’re all terrible and broken individuals caught up within their own machinations.

It’s an utterly ballsy anime series, made even more amazing by the fact that it was way way ahead of its time when it first began broadcast back in 1995. Touching on all manner of subject matter, Neon Genesis Evangelion is nihilism and action without remorse, while also providing a deep dive into even obscure themes of humanity. A masterpiece, all the way through.

So what’s on your list for essential anime for beginners? And am I a turd for not listing FLCL? Probably.