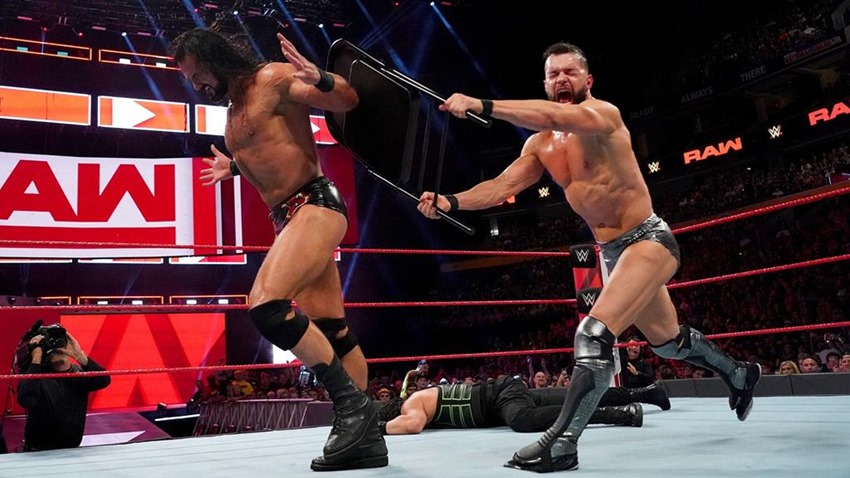 WWE Monday Night RAW took place from the KeyBank Center in Buffalo, New York last night. Here’s all the action that went down in the wake of the Extreme Rules PPV.

Roman Reigns def. Finn Bálor and Drew McIntyre to advance to a match to determine Brock Lesnar’s next challenger for the Universal Championship

RAW General Manager Kurt Angle kicked the show off with an ultimatum last night, a demand that current WWE Universal Champion Brock Lesnar defend his title at Summerslam. A challenge that Lesnar’s advocate Paul Heyman was only too happy to answer. Who would face Lesnar though? With the ring quickly getting crowded with the arrival of Bobby Lashley, Drew McIntyre, Finn Balor, Roman Reigns and Elias, a solution had to be found.

That solution, was a tournament to find the next number one contender as Angle announced a pair of triple threat matches, the winners of each bout moving on to face one another next week to determine the true challenger to Lesnar’s throne. The first match kicked off straight away, with Roman Reigns coming out on top, defeating Finn Balor and Drew McIntyre in a heated battle.

Proving that the B stands for Best, the B-Team made short work of the Ascension, but they also learnt that champions have a target on their back. The newly-minted RAW Tag Team Champions won’t just have Woken Matt Hardy and Bray Wyatt to deal with next week in a rematch for the belts, but also the rest of the division that wants to claim the gold for themselves. Championship gold that The Revival seems to be very interested in adding to their collection…

So much for that suspension! Deciding to crash WWE RAW Women’s champion Alexa Bliss’ victory party, Ronda Rousey locked Bliss in a painful arm bar that was only pulled off when GM Kurt Angle arrived to defuse the situation. Her punishment for breaking her suspension with two days left to go? Another week added to her slate, but with a prize waiting at the end: A championship match against Bliss at Summerslam.

Bobby Lashley def. Seth Rollins and Elias to advance to a match to determine Brock Lesnar’s next challenger for the Universal Championship

What, you thought Extreme Rules was the end of the Bobby Lashly and Roman Reigns feud? We’re just getting started! After earning a massive win over Reigns at Extreme Rules, Lashley powered through Seth Rollins and Elias, clobbering the maniacal minstrel and finishing him off with a Spear of note. One match down, another to go as Lashley prepares to face off against Roman Reigns again next week.