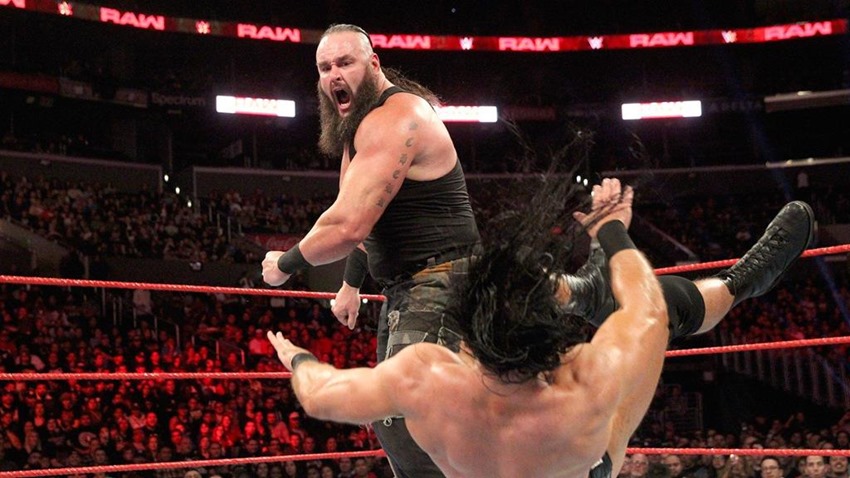 WWE Monday Night RAW took place from the Staples Center in Los Angeles, California. Here’s all the action that went down last night.

Braun Strowman wanted a piece of Acting General Manager Baron Corbin. Corbin wanted to go from acting to full-time RAW GM. Clearly, some compromises had to be made, and RAW commissioner Stephanie McMahon had the perfect idea: Not only would Strowman get his hands on Corbin in a TLC bout, but he’d do so at the final event of the year: WWE TLC.

If Strowman won, he’d also get a crack at WWE Universal champion Brock Lesnar at next year’s Royal Rumble. If Corbin won, he’d get the job of his dreams. But before either man could go mano a mano, some teaming up was authorised for a huge opening match on RAW.

Which of course, did not go as planned. Corbin’s team managed to eliminate Finn Balor and Elias early on in the bout, isolating Strowman and introducing some illegal steel chairs to the mix. The match may have ended in a No Contest, but Corbin came out feeling like a million bucks after he smashed Strowman’s arm with the steel steps and left the gift of destruction a bloodied mess.

Nia Jax is back, and the irresistible force is prepared to do anything to win. Jax teamed up with Tamina to deny Sasha Banks and Bayley any measure of retribution after she stole the show at Survivor Series, with the duo using shenanigans to eventually lure Bayley into Samoan Drop that left the ring shaking long after the ref had counted to three.

What is a Lucha House Rules match? Well it’s like a normal match, but all three members of the Lucha House Party were eligible to compete. Compete they did, as the tag team specialists of The Revival soon found themselves outmatched, with Lince Dorado landing a magnificent Shooting Star Press on Dash Wilder, picking up the win.

After a hellacious night that saw Charlotte Flair push Ronda Rousey to her limits, the RAW women’s champion eventually prevailed over the former Smackdown LIVE champ at Survivor Series. Back on RAW with the title in her hands, Rousey held an open challenge to prove her worth on the roster. Mickie James answered the call, and while the former six-time RAW women’s champion looked set to take down a battered Rousey, the baddest woman on the planet answered back with Piper’s Pit throws and an armbar that had James tapping out.

The match may have been over, but Rousey’s night certainly wasn’t as Nia Jax appeared before her after the bell had been rung, ominously staring down the champ as she made her intentions crystal clear.

AOP may have proven that RAW has the better tag team division when they faced off and defeated The Bar at Survivor Series, but Chad Gable and Bobby Roode proved that they were more glorious than the duo, besting them with some solid brains and brawn.

Hungry for revenge after Ruby Riott had made their rivalry personal, the Queen of Harts used her smarts to keep Liv Morgan and Sarah Logan at bay, eventually reversing a roll-up pin and keeping Riott down for the three count as she picked up some of that sweet sweet retribution.

Seth Rollins may face Dean Ambrose at WWE TLC, but the Intercontinental champion is still looking for answer as to why his former Shield brother turned on him. Ambrose still isn’t willing to divulge his motivations, but he did give Rollins an entire night of running around the RAW arena, leading the champ on a wil goose chase that eventually ended in the ring.

Grabbing a mic and labelling the LA audience as scum, Ambrose was eventually ambushed by Rollins but managed to come out on top when he locked in a pair of dirty deeds. Mad as a hatter, Ambrose is still a crafty lunatic who has a method to his madness.