WWE Monay Night RAW took place from the Fiserv Forum in Milwaukee, Wisconsin. Here’s all the action that went down last night on the road to WWE TLC. 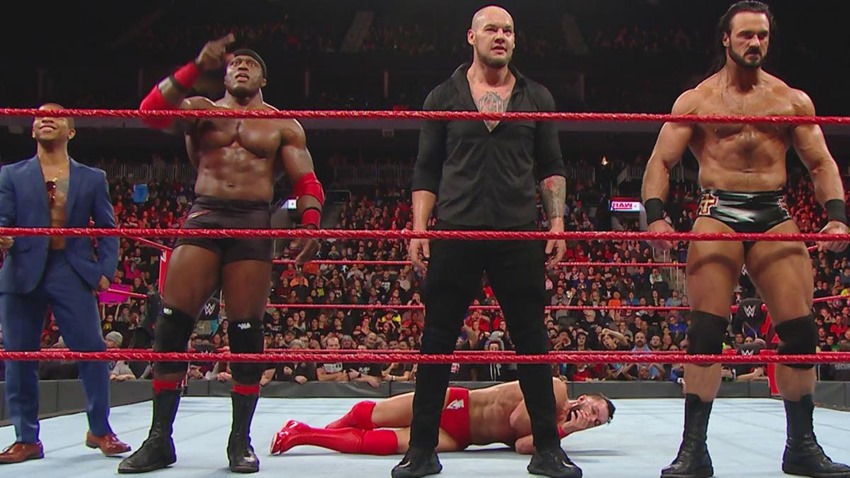 With Braun Strowman laid up in hospital after last week’s hellacious beating, RAW acting general manager Baron Corbin is feeling pretty good about his chances of retaining all the authority of his current position, and turning that into a permanent post. As for Strowman? He may be suffering from an injured elbow, but the Gift of Destruction promised that at the very least, Corbin would get at least one of his gigantic hands.

Baron Corbin may believe that the RAW GM job is guaranteed at WWE TLC, but a few other superstars think differently. Having already interrupted the constable, Elias found himself slotted into a match against Bobby Lashley. With Lio Rush running interference, that match was turned into a No Disqualification bout, leading to a massive beatdown on Elias by McIntyre and Corbin, as the odds were never in his favour.

Another RAW episode, another night where the Lucha House Party  found themselves employing quick offense and even quicker tags to take down The Revival. A final combination of Kalisto’s Salida del Sol, Metalik’s senton off the ropes and a Shooting Star Press from Lince Dorado put a spectacular end to that match.

You want to make fun of Drake Maverick for a bladder malfunction at Survivor Series? Then you’re in trouble, as the tag team title match between Bobby Roode and Chad Gable against reigning champions AOP saw Maverick steal Roode’s glorious entrance robe. Deciding to get some revenge after being endlessly teased last week by the duo, Maverick’s distracting use of the robe as a makeshift toilet saw Roode taken down and crushed by AOP.

Ember Moon may have an uphill battle on her hands when she has to juggle the Mixed Match Challenge with Curt Hawkins and his legendary losing streak as her partner, but last night saw the War Goddess romp home to victory when she finished her bout against Alicia Fox with a breathtaking Eclipse.

Forget about inner peace, as last night saw a more vicious Jinder Mahal return to action, utilising a brutal offense and the Singh Brothers to lock in the Khallas and pick up a win against the conga-loving talent of No Way Jose.

Despite the fact that he was battling an Intercontinental champion who had to keep looking over his shoulder lest a certain lunatic fringe appear, Dolph Ziggler’s impressive performance against Seth Rollins saw the show-off defeated by his own ego. That, and the superplex-Falcon Arrow combo that Rollins used to put the Show-Off away, after he spent a little too much time on the top rope.

Here’s the real story: Alexa Bliss isn’t just remaining on RAW despite some real injuries that have put her career in question, she’s being given control of the RAW Women’s division as Corbin rewarded his allies for sticking by him.

Flexing his managerial muscle yet again, Baron Corbin’s singles match against Finn Balor quickly turned into a handicap bout as he drafted Drew McIntyre to help him even the odds. A Claymore soon found its mark on a beaten Balor, with Bobby Lashley adding to the post match beatdown as Corbin’s reign of terror continued throughout RAW.