WWE Monday Night RAW took place from the Wells Fargo Center in Philadelphia, Pennsylvania. Here’s all the action that went down last night.

There’s no love lost between The Shield and the current RAW tag team champions Dolph Ziggler and Drew McIntyre, but after tonight? The tag team champs are burning for retribution. With the WWE World Cup approaching and slots needing to be filled up, Seth Rollins and Drew McIntyre battled one another for a slot in the tournament, in a battle that was grueling to say the least.

Rollins eventually prevailed however, taking advantage of Dean Ambrose’s emergence on the scene that started some ringside chaos, returning to the ring just in time to see McIntyre counted out.

With WWE Evolution confirming a battle royal main event that will see a new number one challenger crowned, a statement needed to be made last night in the woman’s division. That statement came at the end of the match, as Ember Moon’s match-winning Eclipse on Dana Brooke led to her teaming with Tamina after the bell had rung to hoist Jax over the top rope.

Why had the Bellas turned heel and gone after Ronda Rousey? Simple enough: They felt that she hadn’t truly earned her RAW Women’s championship and was stealing respect that was well overdue to the twins. And then Ronda Rousey beat up a whole bunch of security guards. Next match!

Drew McIntyre may have lost the opening match of RAW and a shot at the WWE World Cup, but Ziggler was far craftier and managed to make sense of chaos in the ring. With Ambrose and Rollins seeming to have a disagreement at ringside, Ziggler lined up a killer Superkick, knocking out the lunatic fringe and grabbing a spot in the coveted tournament.

The Extraordinary Man Who Does Extraordinary Things may have scored another big win over Jinder Mahal, but the emergence of Lio Rush and his smack-talking threatened to steal the show. If it wasn’t for Bayley at ringside, Balor may have had to dip into his arsenal to shut the motor-mouth up.

The leaner and meaner Bobby Lashley was in no mood for selfies last night, as the former champion made short work of Tyler Breeze.

According to Alexa Bliss and Mickie James, their match against the WWE legends will be a walk in the park as nostalgia is no match for actual experience. Do Trish Stratus and Lita have some ring rust? Possibly, but we’ll see just how rusty they really are come WWE Evolution in two weeks.

Burning for revenge after he was eliminated last week by Kurt Angle in a WWE World CUp qualifying match, Acting RAW General Manager Baron Corbin decided to feed the Olympic hero to the wolves known as the Authors of Pain. Angle hit the ring in his golden Conquistador gear and was quickly annihilated but plot twist! That wasn’t Angle under the mask, but some local talent who took the brunt for the former RAW GM.

The real Angle qickly appeared behind Baron Corbin who had been sitting on the ramp watching the action, and gave the Lone Wolf an Angle Slam that he wouldn’t soon forget.

Thanks to Sarah Logan rushing the ring and breaking up the Sharpshooter, Natalya picked up a win via DQ. Fortunately, the mugging from the Riott Squad was short-lived, as Sasha Banks and Bayley sent the gang packing when they arrived to even the odds.

The return of Crews could only end one way: With Elias press-slammed into the mat and the spotlight stolen by the titan who crashed his performance. 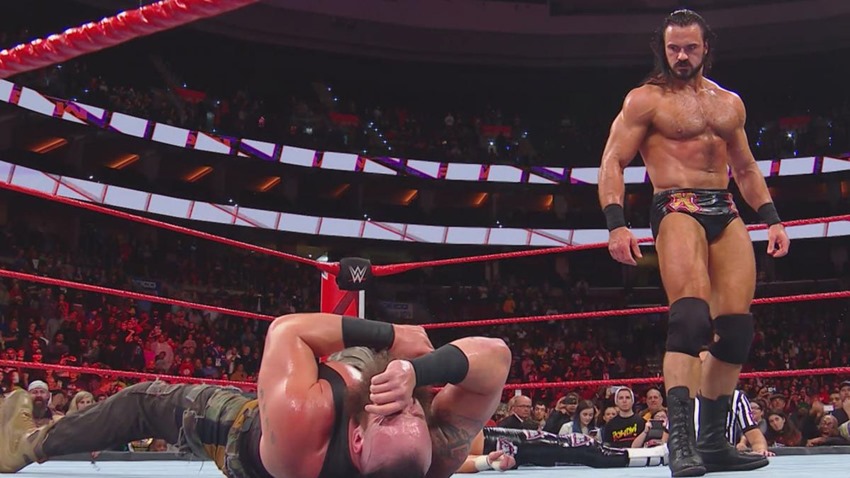 Long story short, the Shield is stronger than ever. After a night of doubt that saw Dean Ambrose this close to abandoning the group, the lunatic fringe overcame his heated emotions and redirected his arsenal at the pack of foes in the ring and got a winning pinfall for the night. Not happy, Braun Strowman proved just how monstrous he could really be  by giving Dolph Ziggler a running powerslam.

Drew McIntyre would have the final word however, catching Strowman with a Claymore and walking out of the ring as RAW ended for the night.