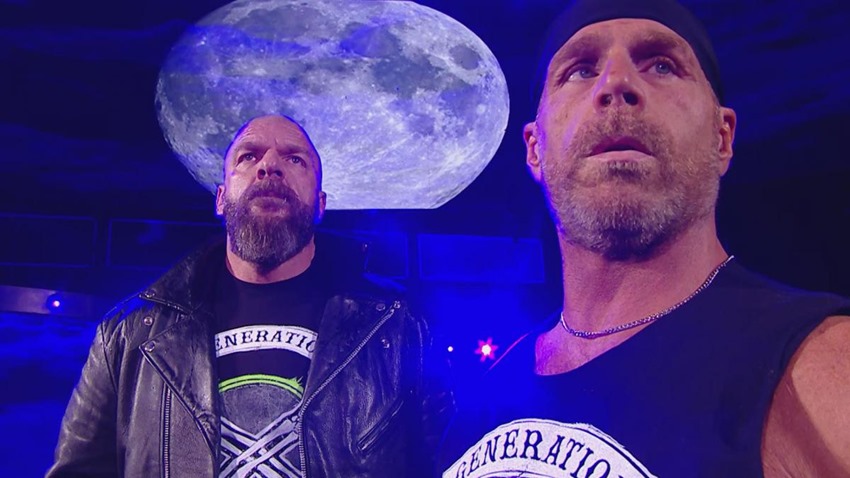 WWE Monday Night RAW took place from the Spectrum Center in Charlotte, North Carolina. Here’s all the action that went down ahead of this Friday’s WWE Crown Jewel event in Saudi Arabia.

With Roman Reigns now sadly out of the WWE Universal championship picture, that leaves a vacant title waiting to be claimed. Who will hoist the belt? The monster amongst men or the beast incarnate? If last night was any indication, Brock Lesnar is going to need to lock in several of his almighty finishers if he wants to put Strowman down, as even a surprise slam only resulted in the challenger being briefly down for the count.

Acting general manager Baron Corbin wasn’t so lucky however, as his attempts to defuse the situation between the two led not only to the lone wolf getting on the bad side of Strowman, but suffering a trio of Runing Powerslams in the process.

Hungry for payback after last week’s loss, Bobby Lashley wasn’t looking to win his rematch against Finn Balor. Instead, he was ready to administer as much pain as possible and thanks to Lio Rush shoving Balor off the top rope before a Coup De Grace could be launched, he had buckets of harm to dish out. Happily taking the DQ loss, Lashley was actually rewarded for his efforts by Baron Corbin: Not only was he being inserted into the WWE World Cup, but he was taking a slot from the one WWE superstar who hadn’t fought a qualifying match: John Cena.

After ruling the roost at WWE Evolution with respective wins, the team of Sasha Banks, Bayley, Natalya, Trish Stratus and Lita teamed up for a huge 10-woman tag team bout against the Riott Squad, Mickie James and Alicia Fox. Chaos reigned supreme, but the faces came out on top with a series of finishers: Twin Twists of Fate from Lita and Bayley to Liv Morgan and Ruby Riott, while Natalya locked in a Sharpshooter that had Alicia Fox tapping out within seconds.

Looks like the modern day Maharaja is back to his old tricks, as last night’s bout against Elias saw a meaner and more ruthless Jinder Mahal return. Chipping away at Elias and having some assistance from the Singh brothers at ringside, Elias weathered the storm and took advantage of a moment to lock in the Drift Away to earn the win.

If you can’t outmuscle your competition, you certainly can outthink them. Bobby Roode and Chad Gable proved to be a perfect mix of brains and brawn last night in a triple threat tag team encounter, but the Authors of Pain had the last word when they pounced on the winning duo.

Why Dean Ambrose, why? Seconds after winning the RAW Tag Team championship last week, Ambrose snapped and attacked his Shield brother Seth Rollins. Demanding an answer, Seth Rollins got an appearance from Ambrose and nothing but the sound of silence, as the lunatic fringe’s motivations are remaining secret for now.

After winning the WWE Evolution battle royale and a shot at a WWE Women’s title of her choosing, Nia Jax collided once again with the War Goddess that she eliminated from the ring to claim victory on Sunday: Ember Moon. Jax may have finished off Moon with a leg drop, but the real story was that of Tamina looking to get involved, briefly distracting the two during the middle of their match.

205 Live’s loss is RAW’s gain, as Lince Dorado, Gran Metalik and Kalisto have joined forces to form the Lucha House Party. Their first big victory? A massive win against the tag team specialists, as a Salido Del Sol from Kalisto on Scott Dawson earned the trio their first big RAW moment.

With the WWE World Cup tournament mere days away, Dolph Ziggler is hellbent on proving just how damn good he really is. In a showcase of skill, Ziggler outfought and outthought Apollo Crews, blocking a Frog Splash and catching him with a signature superkick to earn the win.

Are you ready? Well Kane and The Undertaker certainly weren’t, as their plan to draw out the iconic duo for a showdown saw only Triple H appear. That’s when Shawn Michaels struck, sneaking up from behind and launching Sweet Chin Music at the Phenom. Getting the heck out of dodge, Michaels’ sneak attack was short-lived, as the Undertaker’s trademark lightning struck the arena and the Deadman rose once again.

Whatever D-Generation X has planned for WWE Crown Jewel, they’re probably going to need plenty of those sweet Saudi Dollars afterwards for the hospital bill coming their way.